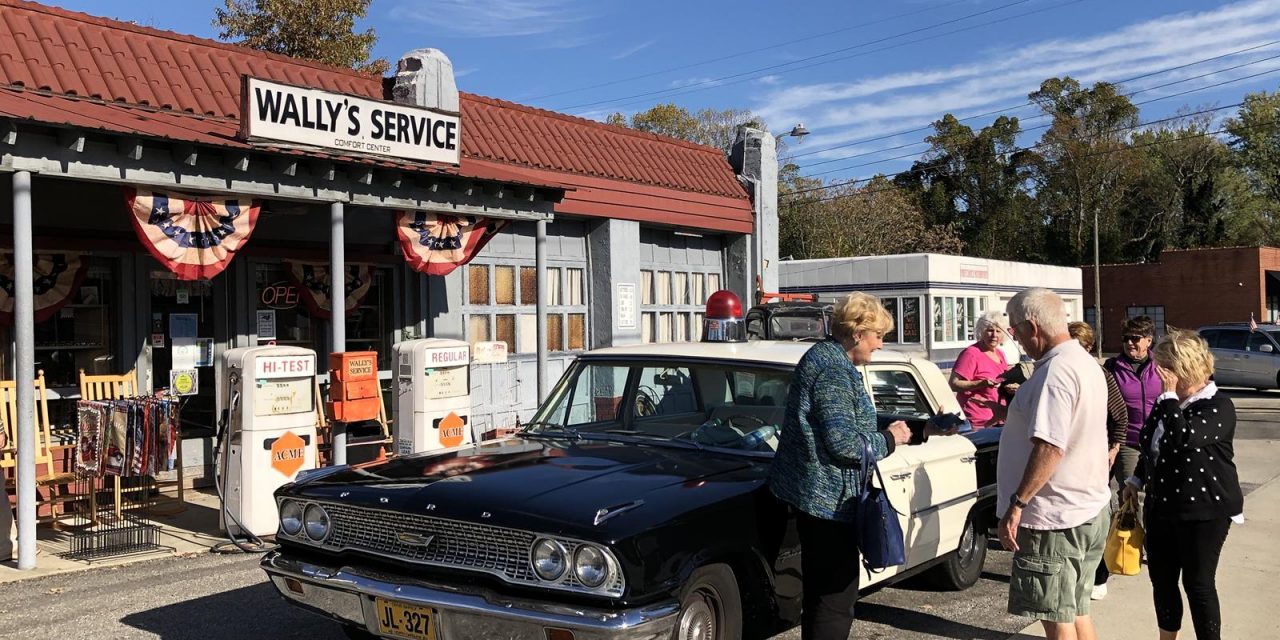 A stroll or squad car cruise through the North Carolina hometown of TV icon Andy Griffith takes travelers back in time. It’s the ultimate nostalgia trip for baby boomers.

It’s been more than 50 years since the classic television series about a small-town sheriff ended its eight-season run, but flashbacks of “The Andy Griffith Show” are ever-present in Mount Airy, North Carolina. The whistling of the catchy theme song seems to waft through the air as images of Andy and little Opie toting fishing poles come to mind.

As the real-life hometown of Andy Griffith, the actor who played Sheriff Andy Taylor, Mount Airy was the inspiration for mythical Mayberry, a place that took TV audiences back to simpler times. Many episodes of the program included shout-outs to Mount Airy as a way for him to say hello to folks back home, and today’s tourism businesses trade on its ties to the situation comedy that ran from 1960 to 1968. However, not a single scene was filmed in Mount Airy—the show was all done in Hollywood, a fact that surprises many visitors.

While “The Andy Griffith Show” claims a soft spot in the hearts of many of baby boomers, its wholesome content bridges generations, says Jenny Smith, group tour manager of Mount Airy’s tourism office. Younger people, she explains, know the show from Netflix, Hulu and cable TV reruns and are some of its biggest fans. One family from Ohio, Smith points out, recently made Mount Airy their vacation destination because that’s what their son wanted for his eighth birthday. 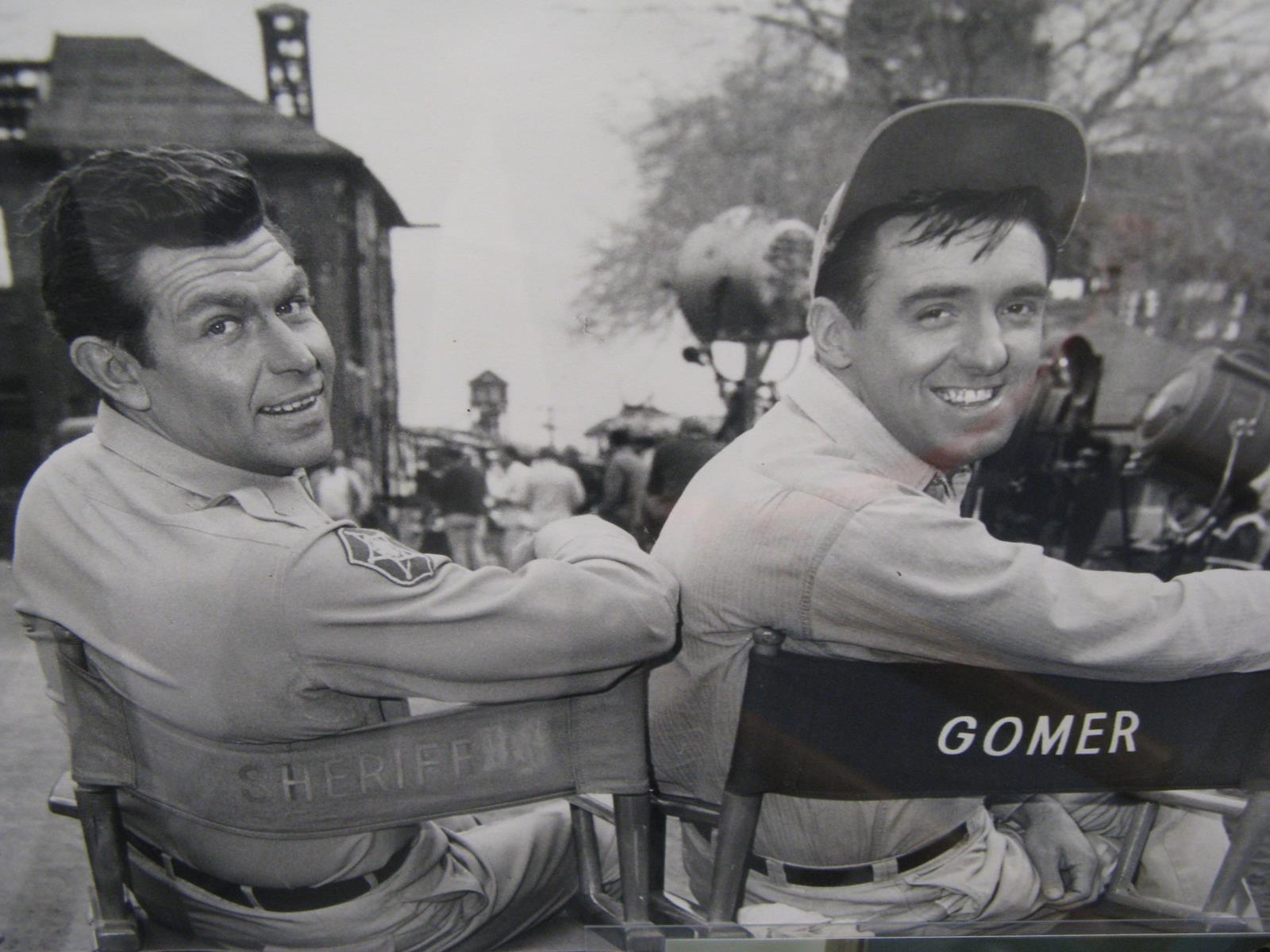 From the Andy Griffith Museum to the souvenir stores on nearby Main Street, there are plenty of places that play up their “Mayberry” connections. And there are other things to see and do in and around this town of 10,300 in the Blue Ridge foothills just south of the Virginia border.

Highlights at the Andy Griffith Museum include costumes and props from the TV show, a re-creation of the Mayberry Courthouse and a touchscreen that allows visitors to watch excerpts of popular episodes. Posters and film clips remind fans that Griffith appeared in “A Face in the Crowd” (1957), “No Time for Sergeants” (1958) and other movies. One exhibit recalls his role as a folksy attorney in the TV whodunit series “Matlock” (1986-1995).

The shrine also chronicles Griffith’s early adulthood. After graduation from the University of North Carolina, he taught high school music and dramatics and in summer from 1947-1953 acted in “The Lost Colony,” the famous outdoor drama that still entertains crowds on Roanoke Island. It was during these years in his roles as Sir Walter Raleigh and other characters that Griffith fell in love with acting and the North Carolina coast. He spent his final years in Manteo and is buried there.

The museum is adjacent to the Andy Griffith Playhouse, built on the site of the grammar school where Griffith first appeared on stage. Outside, the TV Land statue of Andy Taylor and Opie (played by Ronny Howard) carrying fishing poles is a prime photo op. And don’t forget to visit the adjacent Surry Arts Council building, whose lower level has an exhibit on Betty Lynn, the actress who played the girlfriend of Deputy Barney Fife (played by the zany Don Knotts). Lynn, now 93, has lived in Mount Airy since 2007 and makes occasional appearances at the museum.

Also downstairs is a fascinating exhibit on Eng and Chang Bunker, the “Original Siamese Twins.” After appearing in “freak shows” as boys, the world-famous brothers (born in 1811 in Siam, now Thailand) settled down on a farm just outside of Mount Airy, started families and became important members of the community. Plans are being made for a museum dedicated to the conjoined twins.

To really get into the spirit of Mayberry, book your group for a spin around town with Squad Car Tours, a company with six 1960s vehicles based at Wally’s Service Station. Each car seats five guests. 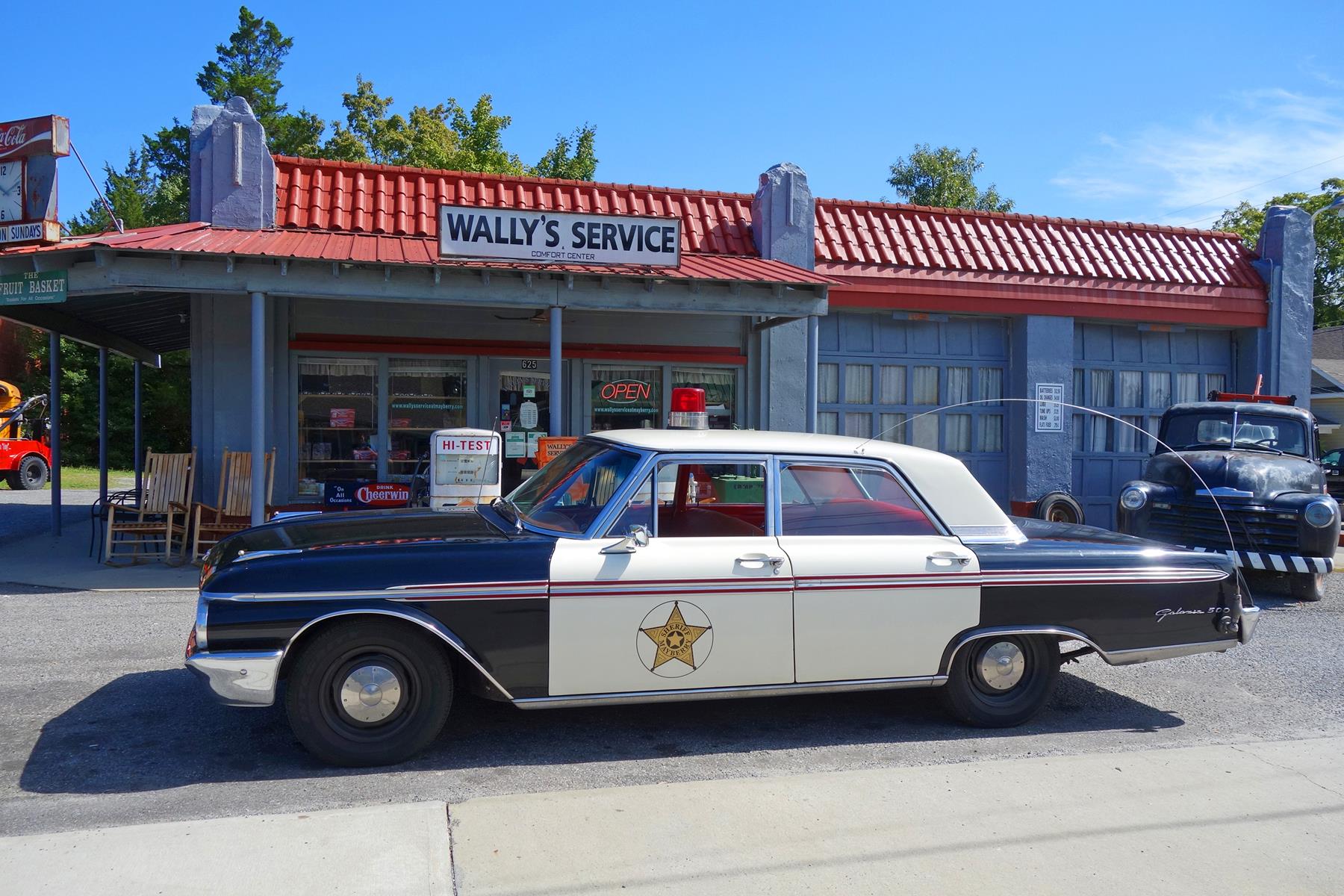 With their driver-guide, passengers sit back in a vintage, black-and-white Ford Galaxie—the kind that Andy and Barney drove—while cruising by places with Griffith tie-ins. Examples include the Main Street shopping corridor; Griffith’s boyhood home, now a two-bedroom vacation rental handled by Hampton Inn; and Grace Moravian Church, where Andy got free trombone lessons and later served as band director. Guides proudly point out that there were 150 references to Mount Airy on “The Andy Griffith Show.”

The tour stops at the massive North Carolina Granite Corp. quarry, which represents the area’s only original large industry still intact—textiles, tobacco and furniture-making have pretty much gone by the wayside. (However, you will pass the factory of Renfro Corp., one of the world’s largest sock manufacturers. Save big on brand-name and novelty socks at the Renfro outlet store downtown.) These days, the countryside surrounding Mount Airy abounds with wineries.

To cover the same territory by bus, the tourism office can arrange for a step-on guide ($5 per person for groups of 20 or more). 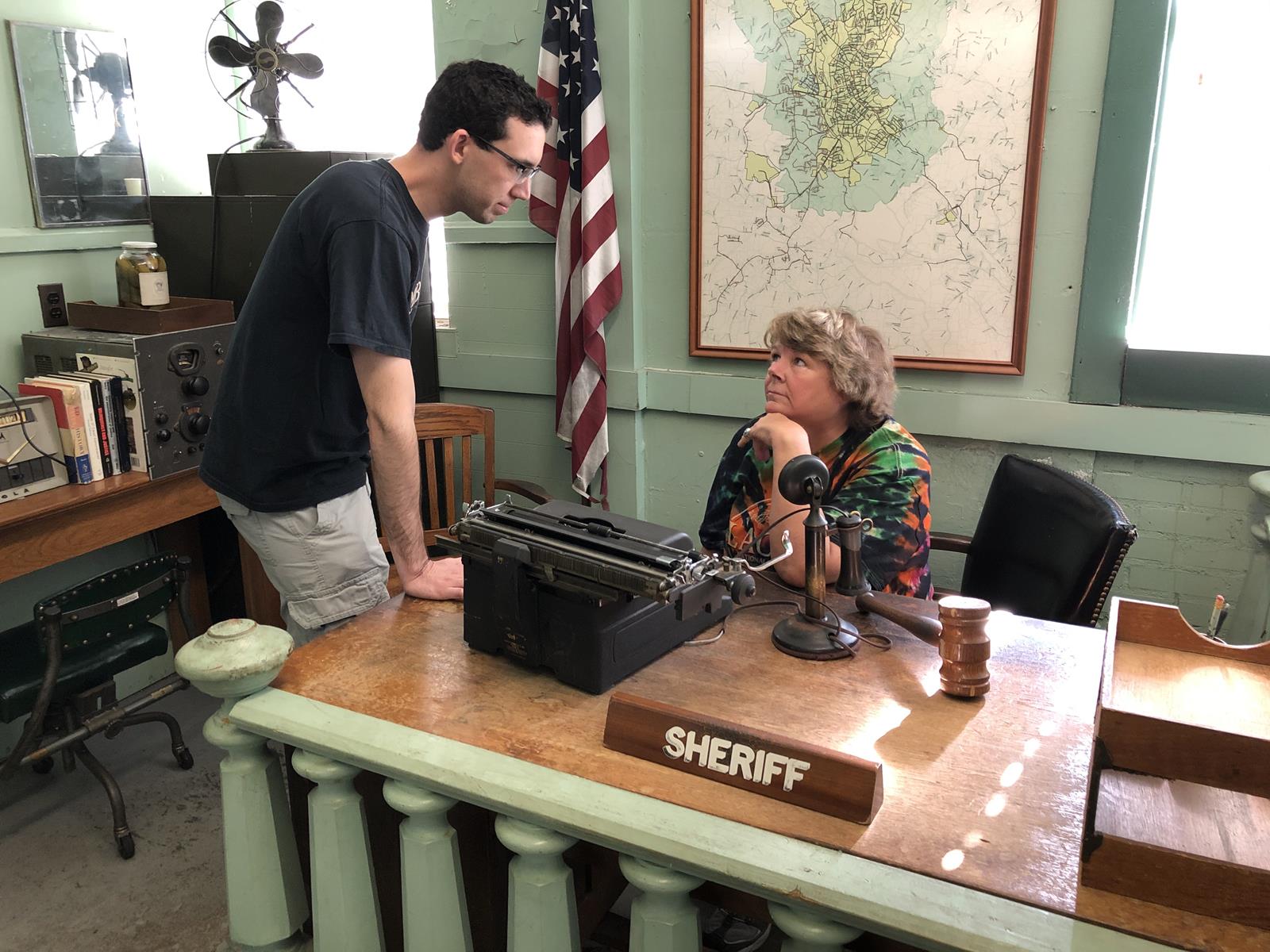 The Mayberry Courthouse and Jail replica, next to Wally’s gas station, is a big hit with fans of “The Andy Griffith Show.” Guests can pose at the desk of Sheriff Andy Taylor. (Randy Mink Photo)

In the replica Mayberry Courthouse and Jail next to Wally’s, tourists pose with the candlestick telephone at the desk of Sheriff Andy (who also served as justice of the peace) or sit on the rocking chair inside the jail cell often occupied by Mayberry town drunk Otis Campbell (portrayed by Hal Smith).

Strolling Main Street in downtown Mount Airy is a fun trip into yesteryear and would be a delight even without the call-outs to Mayberry. Relive bygone days at the Mayberry Antique Mall or indulge at Opie’s Candy Store. For another blast from the past, drop in for a malt or sundae at Walker’s Soda Fountain, which was Lamm’s Drugstore when Griffith worked there delivering food and medicines. 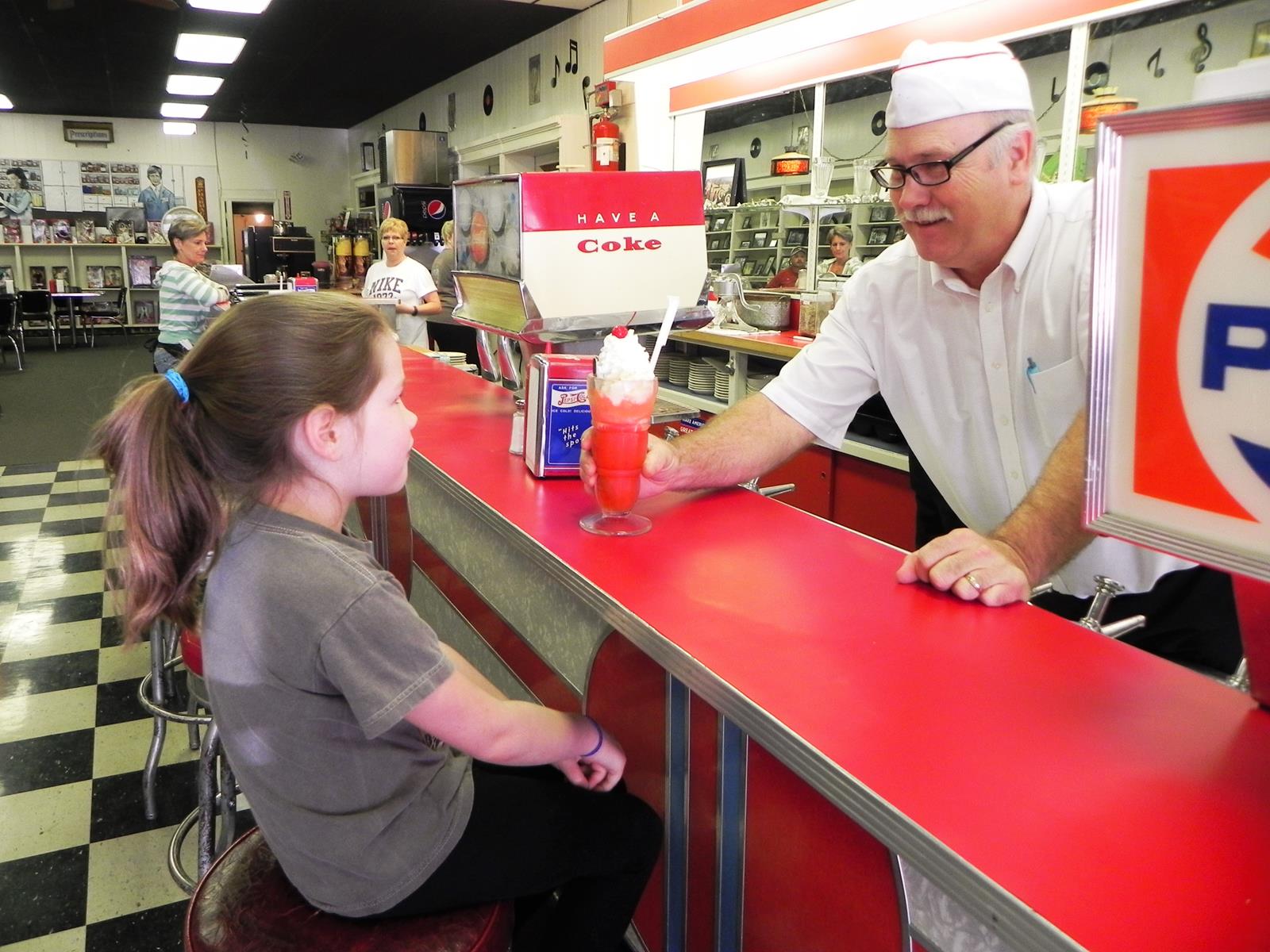 Souvenir stores brim with T-shirts, mugs, magnets, posters, Christmas tree ornaments, metal signs and other items emblazoned with the faces of Andy, Barney and supporting characters Gomer and his cousin Goober (Jim Nabors and George Lindsey), Aunt Bee (Frances Bavier) and Floyd the barber (Howard McNear). You’ll find books like “Aunt Bee’s Mayberry Cookbook” and “Mayberry Trivia: 1,500 Questions About a TV Classic.” There are CDs of Griffith and Nabors singing hymns. A box of 39 DVDs covering all 249 episodes of “The Andy Griffith Show” sells for $125.

Snappy Lunch is a diner famous for its messy pork chop sandwich. Opened in 1923 and frequented by Griffith as a boy, the place was mentioned once on his TV show. Visitors exploring Main Street also will see Floyd’s City Barber Shop and Barney’s Cafe.

A favorite place to pig out is Miss Angels Heavenly Pies, which makes scrumptious pies, brownies, muffins, bread pudding, whoopie pies and other baked goodies. Owned by Angela Shur, it’s a stop on the Surry Sonker Trail, a collection of eight local eateries that serve the sonker, a regional, cobbler-like treat blending dough with apples, peaches, blueberries or other fruits. Some of Miss Angel’s “zonkers” (her spelling) and pies have a moonshine glaze.

Learn more about this part of northwest North Carolina at the Mount Airy Museum of Regional History. One exhibit is devoted to singer Donna Fargo, a hometown girl who made good as a country/pop star in the 1970s with hits like “The Happiest Girl in the Whole U.S.A.” and “Funny Face.” Docent-led tours of the four-story museum, with 10-12 people in each group, can be arranged.

Outside of downtown, a room at the Mayberry Motor Inn on Andy Griffith Parkway has been set aside in honor of beloved Aunt Bee. In addition to clothing worn on the TV show by Frances Bavier, memorabilia on display includes furniture, photos and personal possessions bought by the motel owner at the estate auction following her death in 1989. Bavier spent her later years in Siler City, North Carolina. Two or three people at a time are allowed to enter and view the contents from behind a rope.

Every September, cast and crew of the show (and spin-offs “Mayberry RFD” and “Gomer Pyle, U.S.M.C.”), or sometimes their offspring, come to Mount Airy for Mayberry Days. The week-long festival features a parade, concerts, checkers and corn hole competitions, a whistling championship, and pie-eating, pork chop-eating, apple-peeling and hay bale-tossing contests. 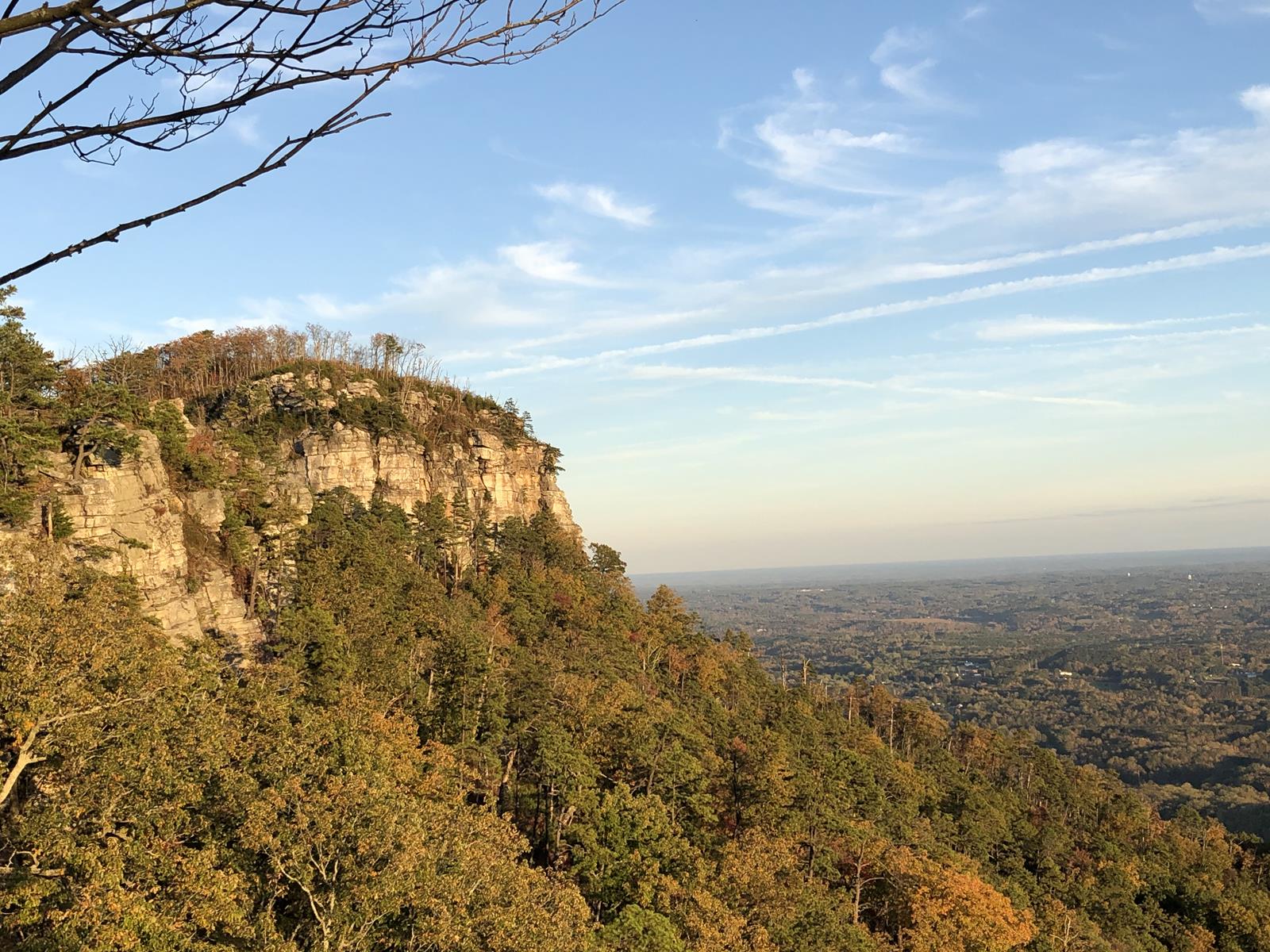 Fans of “The Andy Griffith Show” will recall references to Mayberry’s little cousin, a neighboring town called Mount Pilot. That was a shout-out to real-life Pilot Mountain, a pleasant Surry County community of 1,500. Most visitors passing through town are on their way to Pilot Mountain State Park, whose 2,420-foot peak looms over the Yadkin River Valley.