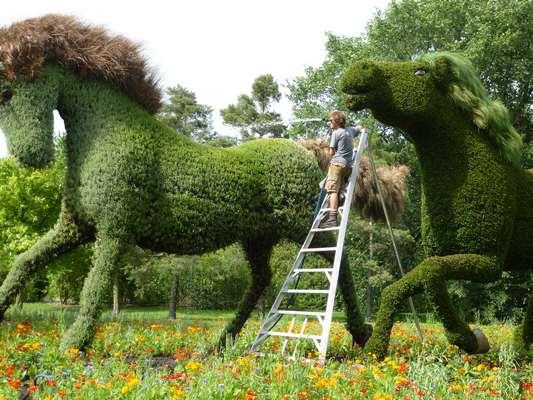 The only thing I can compare it to is the Tournament of Roses Parade in Pasadena. An extravaganza of immense proportions, this year’s blockbuster exposition at the Montreal Botanical Garden is a must-see, even for those who don’t have a particular affinity for things floral.

Mosaicultures Internationales Montreal 2013 – Land of Hope, running through Sept. 29, is a horticultural art exhibition displaying the creations of 20 countries and several Canadian cities along a circuit of a mile or so. 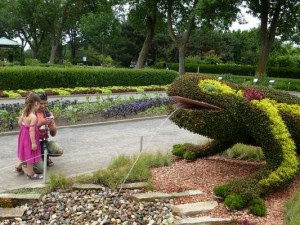 An international competition in two and three dimensions, the exposition takes place every three years, with past editions having been held in Montreal in 2000 and 2003, Hamamatsu (Japan) in 2009 and Shanghai in 2006. The “Land of Hope” theme focuses on the planet’s biodiversity and the importance of preserving the richness of life on Earth.

Bring your camera and be ready to pose with these larger-than-life sculptural masterpieces. Sit with gorillas made of plants and flowers in “Gorillas at Risk,” a creation from Uganda. Get a picture of a gardener high atop a ladder as he waters velvety green horses in stride or be immersed with our fine feathered friends in a visit to “The Bird Tree,” perhaps the most elaborate work of art.

The branches of the 16-foot-tall “tree” comprise 56 bird species, while its roots change into a kakapo (also referred to as an owl parrot, the only parrot unable to fly) and six species of amphibians and reptiles. All the species—birds, amphibians, reptiles—are among the most endangered. At the base of “The Bird Tree” are a salamander, turtle, frog and iguana.

Guided tours of the 40-some creations are available. Visitors can participate in the People’s Choice Award by voting for their favorite work.

Among the countries represented are England, Belgium, China, Japan, Finland, France, Mexico, Turkey, Yemen and the United States. The Atlanta Botanical Garden contributed “Fragile Frogs.” One of the four Japan entries, “A Dove for Peace,” comes from Hiroshima. 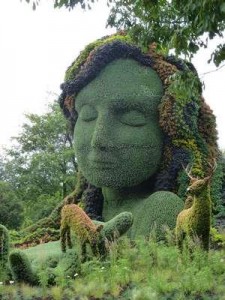 Mosaicultures or not, Montreal Botanical Garden (open year round) is considered one of the world’s leading botanical gardens, with 22,000 species and 300,000 plants. The peaceful Chinese Garden, inspired by the private gardens of the Ming Dynasty (14th to 17th century), is the largest of its kind outside of China. Other highlights include the Japanese Garden, Rose Garden, First Nations Garden, 10 exhibition greenhouses and a vast wooded Arboretum.

Montreal Botanical Garden is part of Montreal Space for Life, the largest natural science complex in Canada. It consists of three other attractions, including the Insectarium on the garden grounds, the largest museum devoted to insects in North America. Across the street in Olympic Park (site of the 1976 Summer Olympics) are Rio Tinto Alcan Planetarium and the Montreal Biodome. The latter, a collection of animals and plants from four ecosystems in the Americas, has everything from penguins to parrots. (montrealspaceforlife.ca)