As this National Scenic Byway celebrates its 75th anniversary, now is the perfect time to chart a path following America’s most storied river. 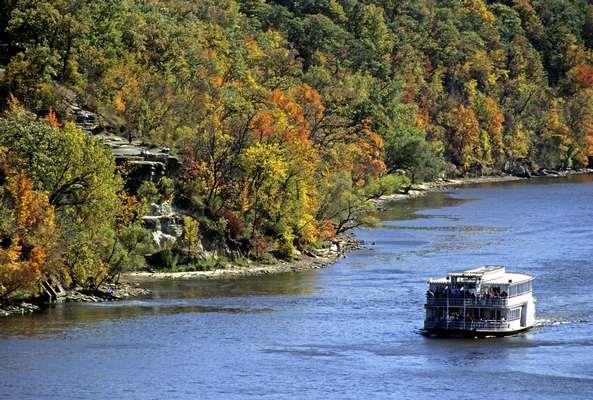 Minnesota may be the Land of 10,000 Lakes, but it is also the source of one big river—the mighty Mississippi. Slicing through northwoods wilderness and pine-studded lake country to rolling farmland, a major metro area and rugged bluffs along the Wisconsin border, the Great River Road in Minnesota covers 575 miles, the byway’s longest stretch in any of the 10 Mississippi River states.

Established back in 1938 when Franklin D. Roosevelt was president, the epic road is a gateway to the river valley’s colorful history and awesome scenery. The concept of a Great River Parkway along the Mississippi was developed by the governors of the 10 states. To conserve resources, they decided that rather than building a new continuous road, the existing network of rural roads and fledgling highways would become the Great River Road. The green Pilot’s Wheel signs that marked the route decades ago still herald the byway today.

The Mississippi begins its 2,552-mile journey to the Louisiana delta in the humble headwaters at Lake Itasca. Visitors to Itasca State Park, located southwest of Bemidji and north of Park Rapids, can wade in the ankle-deep water, a short walk from Mary Gibbs Headwaters Visitor Center. Snapping a photo of the Headwaters Post, a tree trunk sign that signifies the river’s source, is de rigueur. Motorcoach groups can visit the headwaters on a park tour guided by a step-on naturalist. The river at this point is only 20 to 30 feet wide, the narrowest stretch of its entire length. 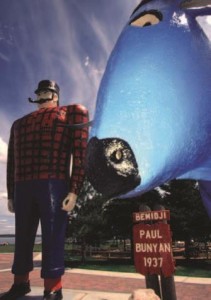 Besides the headwaters, Minnesota’s oldest state park (established in 1891) provides a variety of things to see and do. There are hiking trails, a fishing pier and swimming beach. Groups can learn about flora and fauna, Ojibwe culture and the park’s history as a resort through excellent exhibits at the Jacob V. Brower Visitor Center. Nearby are the rustic log buildings of the 1905 Douglas Lodge. As an alternative to cabins or the main lodge, groups might choose the 10-bedroom Clubhouse, which has a common area, fireplace and six washrooms.

From the Douglas Lodge pier, the 141-passenger Chester Charles II offers a two-hour, naturalist-narrated excursion on the lake, following the route taken by the Indian guide Ozawindib in 1832 when he led British explorer Henry Rowe Schoolcraft to the source of the Mississippi. The lodge can prepare a picnic lunch for the cruise.

Bemidji, situated where the Mississippi passes through Lake Bemidji, is known as the “First City on the Mississippi.” A must for groups in downtown Bemidji is a photo stop at the painted statues of Paul Bunyan and Babe the Blue Ox, larger-than-life symbols of the lumberjack lore in this part of the world. Located at the travel information center, they have been fixtures on the shores of Lake Bemidji since 1937. Groups also enjoy touring Bemidji Woolen Mills and shopping in its factory outlet store. Buena Vista Logging Village, at a ski area outside of Bemidji, offers a chuckwagon-style lunch and horse-drawn covered wagon rides to the “Top of the World,” a ridge that overlooks nine lakes. For evening entertainment in summer, consider a Paul Bunyan Playhouse production in the historic Chief Theatre. 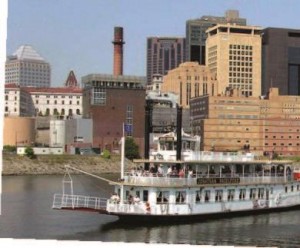 Grand Rapids, an old lumber town just over an hour east of Bemidji, boasts a number of group-friendly attractions, including the Forest History Center. On customized group tours, costumed re-enactors portray life in a 1900 logging camp, and a traditional lumberjack meal is served in the cook house. Climb the fire tower for panoramic views, especially stunning in fall. Other options include music/storytelling and nature craft programs, plus team-building challenges such as wood-chopping and tug-of-war competitions.

Groups in Grand Rapids can extend their logging experience with a tour of the massive Blandin Paper Mill. The town’s Myles Reif Performing Arts Center presents everything from Broadway to Big Band to ballet. Fans of the actress who played Dorothy in The Wizard of Oz will revel in exhibits at the Judy Garland Museum. It’s attached to the white frame house where Frances Ethel Gumm (Judy’s real name) grew up in a musical family that was considered a curiosity in this Northern Minnesota logging town.

The Mississippi River meanders south through the Brainerd Lakes Area and Granite Country surrounding St. Cloud as it flows toward the twin cities of Minneapolis and Saint Paul. St. Cloud, home to four colleges and universities, makes a good base for Great River Road itineraries in Central Minnesota.

Sightseeing highlights in St. Cloud, nicknamed the Granite City for the area’s granite works, include Munsinger and Clemens Gardens, two distinct but complementary gardens on the banks of the Mississippi. Clemens Gardens are laid out in a formal European style, while Munsinger Gardens command a wilder setting.

In the Mississippi River town of Little Falls, north of St. Cloud, groups can tour the Charles A. Lindbergh House, boyhood home of the famous aviator. The Lindbergh History Center next door shows a film of his life, and visitors can climb inside a replica of the Spirit of St. Louis’ cockpit. 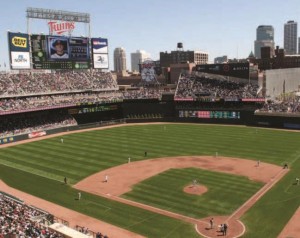 Summer visitors to Minneapolis can catch a Minnesota Twins baseball game at Target Field, where private group tours are available.

Both Saint Paul and Minneapolis overflow with group possibilities, many of them along the river. The Mississippi River Visitor Center in downtown Saint Paul is a good place to start. Located just off the lobby of the Science Museum of Minnesota, it offers free exhibits and ranger programs on river culture, biology and history, plus information on activities in the urban area’s Mississippi National River and Recreation Area, a 72-mile river park. In the science museum, guests can stroll among dinosaurs, create a tornado, drive a tug up the river and play mini golf in the Big Back Yard overlooking the Mississippi. The domed Omnitheater is a star attraction.

At Harriet Island, a riverside park across from downtown Saint Paul, groups can board a Padelford Riverboats sightseeing cruise or catch a play or old-time melodrama at the Minnesota Centennial Showboat. On bluffs above the confluence of the Mississippi and Minnesota rivers, costumed soldiers and settlers bring frontier days to life at Historic Fort Snelling. The Minnesota History Center and neighboring Minnesota State Capitol are other Saint Paul crowd-pleasers. 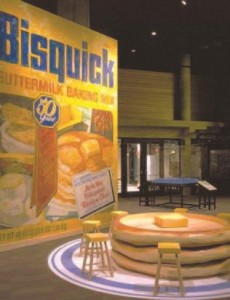 On the Mississippi River in downtown Minneapolis, Mill City Museum, housed in the ruins of the Gold Medal Flour mill, tells the story of the flour milling industry and the river’s role in building brands like Pillsbury and Betty Crocker. Next door is the state-of-the-art Guthrie Theater. The St. Anthony Main district, easily reached from Mill City Museum by the Stone Arch Bridge, abounds with restaurants and night spots. Hear the pounding of St. Anthony Falls as you cross the bridge and read interpretive displays on how the river was harnessed to turn the wheels of industry. For a different take on Minneapolis, consider booking your group on a Mississippi River paddling tour offered by Above the Falls Sports, an urban kayak specialist. Its 2.5-hour “Working the Local Channel” tour explores the waters above the lock and dam and down river from the Plymouth Avenue bridge. Half-day, full-day and luncheon trips also are available. 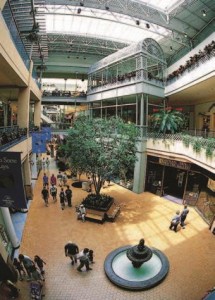 Shopping at Mall of America in Bloomington is a must for any group touring the Twin Cities.

A Twin Cities itinerary is not complete without a visit to Mall of America in Bloomington. The nation’s largest shopping and entertainment complex continues to add new stores and restaurants and just welcomed its first on-site hotel, Radisson Blu. Group programs include the popular “Meet & Greet,” a scavenger hunt organized by Dick’s Last Resort and customized educational presentations for students.

On their way to Southeastern Minnesota, groups on the Great River Road can stop in Hastings for some fun in the dirt at Extreme Sandbox. In this 10-acre playground, adults get a chance to operate bulldozers and other heavy construction equipment as expert instructors guide them through precision obstacle courses and activities.

The Great River Road in Southeastern Minnesota leads to charming towns that captivate tour groups with vintage buildings and specialty shops. From atop river bluffs, the fall foliage viewing is some of the best in the Midwest, and there’s great eagle watching in winter and spring. Other migrating birds flock to this area, known as the Mississippi Flyway. 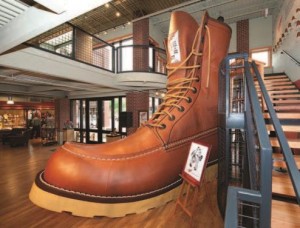 Red Wing has been home for over a century to Red Wing Shoe Co. and Red Wing Pottery. The shoe manufacturer offers factory tours from late May to October. The free-admission Red Wing Shoe Museum on Main Street features the “World’s Largest Boot,” which stands 16 feet tall; an attached store sells the shoes and work boots the company has been making since 1905. Groups can choose from several pottery shops and showrooms in town and see potters at work. The 1904 Sheldon Theatre offers a variety of music and drama performances.

A popular lunch spot affording views of the Mississippi is The Veranda restaurant in the historic St. James Hotel. Or have brick-oven pizza at the Falconer Vineyard Winery. Red Wing Brewing Co., a new microbrewery, has brought back two beers that were brewed in town at the turn of the 20th century.

Wabasha, another river town full of yesteryear charm, is best known to tour groups as the home of the National Eagle Center. Visitors can meet the resident bald eagles and attend an eagle presentation conducted by trained handlers.

Downtown Winona attracts museum buffs with the Winona County History Center, Polish Cultural Institute and Museum, and Watkins Heritage Museum at the nationally known home products company. From spices and organic flavorings to body oils and foot creams, Watkins products are made from natural ingredients in the company’s block-size complex, a downtown fixture since 1885. The museum gift shop sells more than 350 products.

A Trester Trolley tour of Winona includes Garvin Heights Overlook, which offers vistas extending as far as 30 miles on a clear day. For groups, a catered dinner with wine tasting can be arranged at Garvin Heights Vineyard.

Whether a group chooses to concentrate on one section of the Mississippi River Valley or has time to cover more territory, the Great River Road, as it has for 75 years, provides an enchanting path to new discoveries.