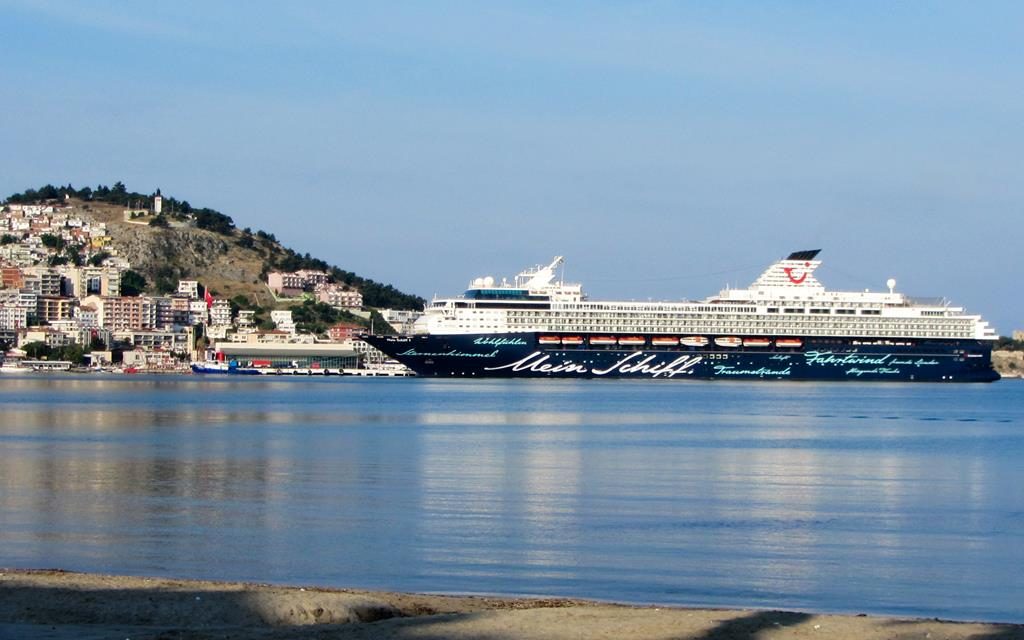 The notion of waking up almost every morning in a new city or country energizes those of us who cruise with the destination in mind. We can’t wait to get off the ship and start exploring, knowing we have only seven or eight hours to see what we can see. Whether we prefer to wander independently or take a ship arranged shore excursion, our goal is to make the most of every second in port. That urge to soak it all in tends to be especially strong in the Mediterranean, which abounds with iconic sights.

Cruising affords the luxury of visiting multiple countries without the hassles of plane or bus travel. You unpack just once and the ship becomes your floating home for a week or two. And since the ship does most of its traveling at night, you have full days to take in the urban hot spots and archaeological sites—spending your time sightseeing, shopping and just lingering at cafes to watch the world go by.

In turnaround ports—cities where the sailing begins or ends—most cruise lines offer pre- and post-cruise hotel packages. For those flying in and out the same day, the line also may offer a city-overview tour on day of embarkation or disembarkation—just after you arrive at the airport or before the flight home.

Here is a sampling of popular ports that show up on Mediterranean cruise itineraries:

The southern end of Las Ramblas, one of Europe’s best-known promenades for people-watching, is just a 10-minute walk from the cruise terminal in Spain’s largest port. The color-splashed pedestrian drag, with flower stalls, outdoor cafes, mimes and musicians, runs through the heart of the Old City, pulsing with an endless flow of humanity. Not far from the tree-lined thoroughfare is the atmospheric Gothic Quarter with its labyrinth of winding medieval streets and the huge Cathedral of Barcelona.

Many ship-organized excursions include La Sagrada Familia, an unfinished church that is considered the masterpiece of visionary Catalan architect Antoni Gaudi, who spent most of his life in Barcelona. He worked on the flamboyant landmark, famous for its splendid spires and stained-glass windows, from 1882 until his death in 1926. Another creative genius, 20th century artist Pablo Picasso, lived in the city during his formative years (ages 14-21), and many of his early works are enshrined in the Picasso Museum, which is housed in five connecting Gothic palaces in the La Ribera neighborhood. Montjuic Mountain, a scenic stop on city tours, affords panoramic views and is home to the stadium from the 1992 Olympic Games that Barcelona hosted. 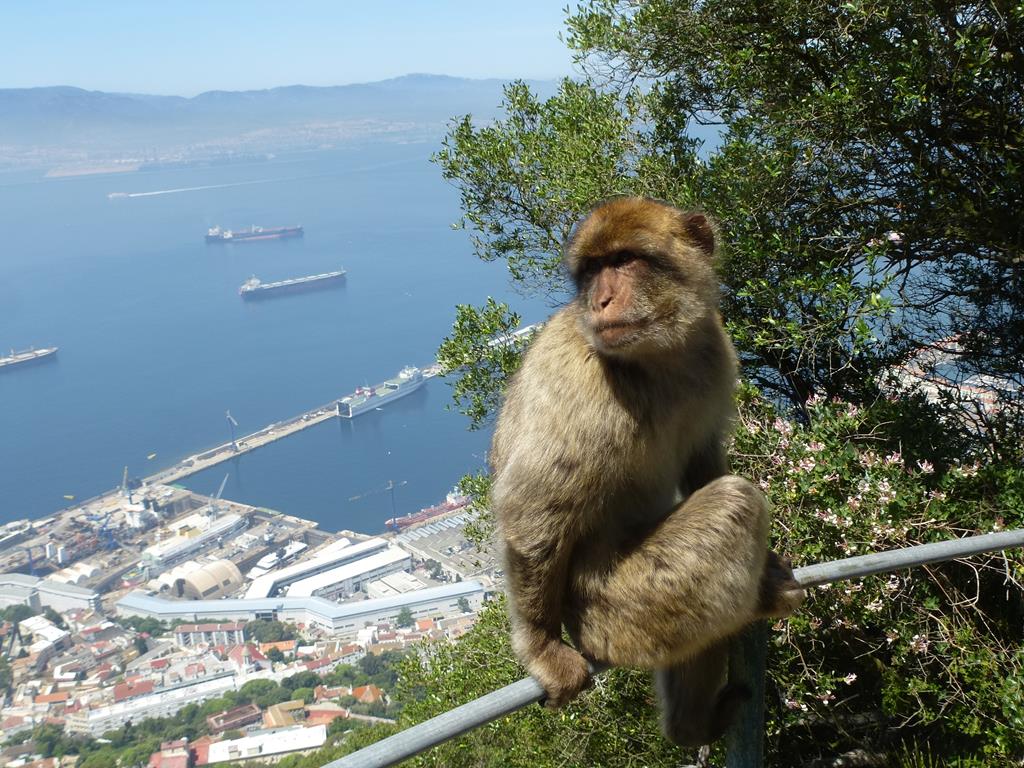 A geographical oddity, this British colony attached to the southern coast of Spain commands a strategic location on the narrow strait that connects the Mediterranean Sea and Atlantic Ocean—and separates Europe from Africa. Its chief claim to fame is the Rock of Gibraltar. In fact, Gibraltar is often referred to as simply “The Rock.”

The territory’s only town has many reminders of Mother England, from fish ’n’ chip eateries and traditional pubs to bright red phone booths, mailboxes and double-decker buses. Gibraltar’s real sightseeing highlights are found on the upper parts of the Rock, a nature preserve. The summit’s observation terrace, reachable by taxi or cable car, offers views in all directions. And everyone wants to get close-up pictures of the resident Barbary macaques (a species of tailless monkey) perched on rocks, railings or cannons. Beware—they will snatch food from your pocket or purse. 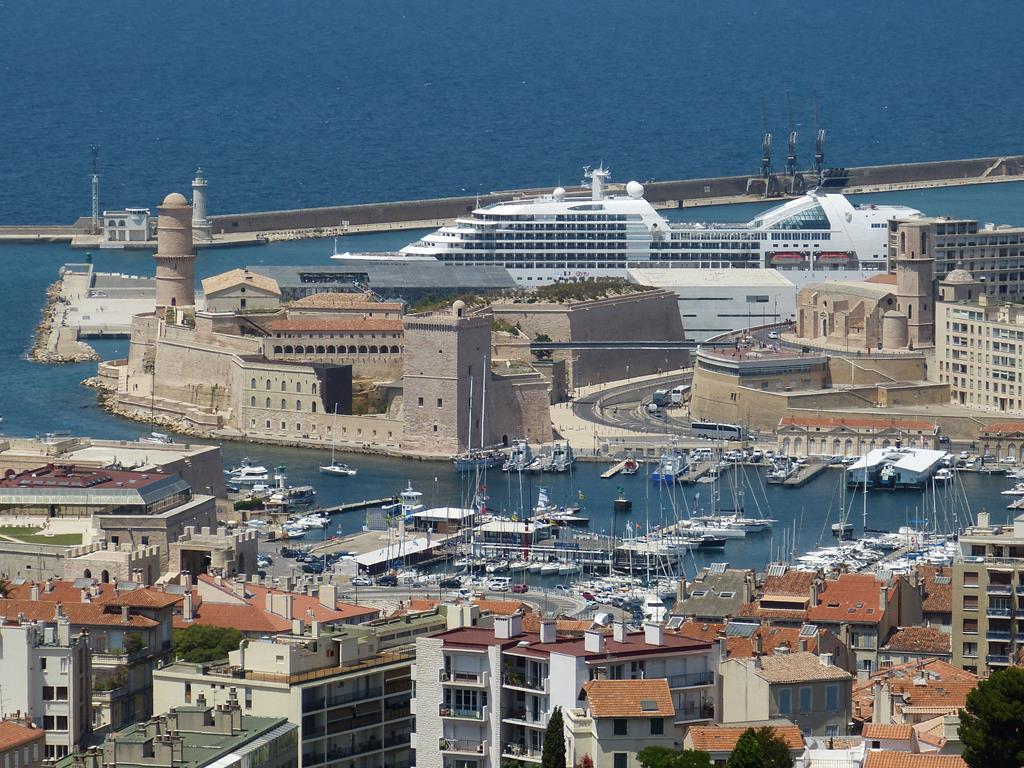 France’s second-largest city is a virtual melting pot of peoples and cultures. Many tours cruise down the Corniche President J.F. Kennedy, a scenic seaside boulevard with stunning views of the coast’s craggy cliffs, beaches and nearby islands.

Some shore excursions take you to the city’s highest point, where you’ll find the spectacularly situated Basilica Notre-Dame de la Garde. The square bell tower of the neo-Byzantine church supports a copper-and-gilded gold statue of the Virgin Mary that looks out over Marseille. Colorful mosaics decorate the interior cupolas.

In the Old Port (Vieux-Port), the city’s main harbor, working fishermen mingle with the younger crowd that frequents the fashionable bars, restaurants and theaters that have revitalized this part of town. Overseen by two massive forts, Fort St-Nicolas and Fort St-Jean, this is a great place to grab a bite at a waterfront cafe. Just offshore is the rocky island occupied by Chateau d’If, France’s Alcatraz. It was a prison made famous as the setting for The Count of Monte Cristo by Alexandre Dumas.

Marseille is also the gateway to Provence. Rather than see the city, some cruise passengers opt for tours to the countryside around Arles and Avignon, immortalized in the canvases of Van Gogh, Cezanne, Matisse and Picasso. Avignon is home to the Palace of the Popes, the residence of nine popes from 1309 to 1378 during their exile from Rome. 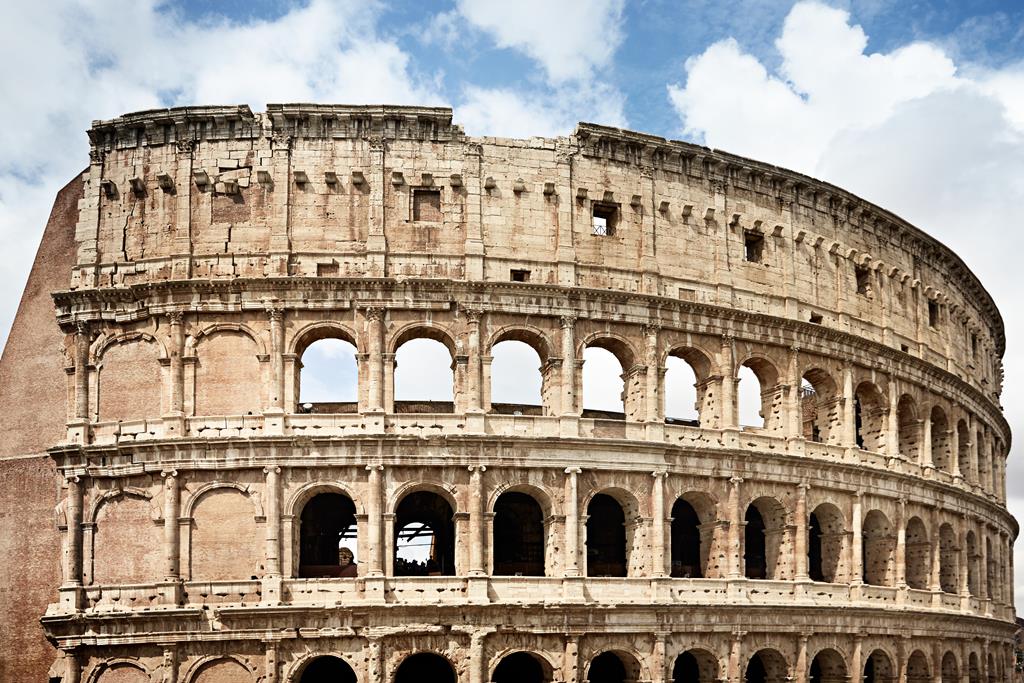 This port city may not be a household name, but Rome is. Many Mediterranean cruises start and/or end in this jumping-off point for the Eternal City, a 1½-hour bus ride away. Rome makes for a great pre- or post-cruise stay, and you really do need more than one day to do the city justice.

Cruise lines’ shore excursions feature the highlights of ancient Rome—the Colosseum, Pantheon and ruins of the Roman Forum— and may offer the chance to toss a coin in the Trevi Fountain, stroll the Piazza Navona and climb the Spanish Steps. A trip to Rome, of course, is not complete without a peek inside the Baroque sanctuary of St. Peter’s Basilica, the largest church in Christendom, or walking across St. Peter’s Square, where the faithful come to see the pope every Sunday. Many tours include the Vatican Museums and Michelangelo’s Sistine Chapel. Holland America Line offers a tour that visits filming locations used in Roman Holiday, the 1953 romantic comedy starring Audrey Hepburn and Gregory Peck.

Besides Rome, tours from Civitavecchia also explore the Italian countryside. Princess Cruises, for example, offers an excursion to the Umbrian hilltop city of Orvieto, famous for its white wine and 13th century cathedral. Other choices include Lake Bracciano and Tuscia wine country, and the medieval village of Tuscania with olive oil tasting at a family-owned farm. 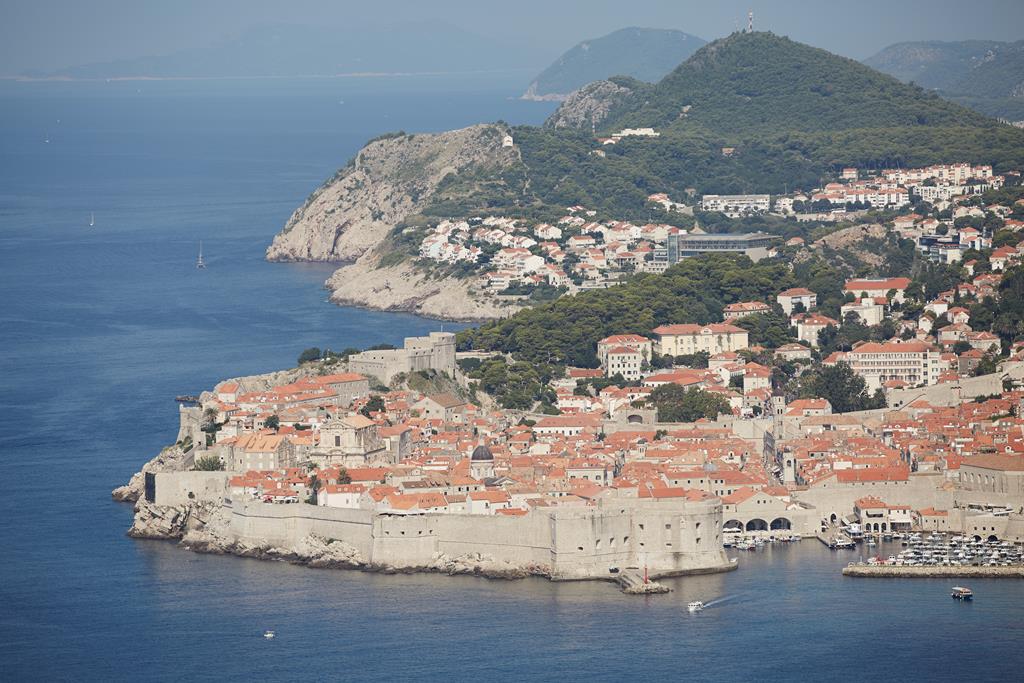 Compact and car-free, the medieval walled Old Town is a UNESCO World Heritage Site with cobbled streets, ancient stone buildings and fortified ramparts rising above orange-tiled roofs. Despite heavy damage from the war for independence from Yugoslavia in the early 1990s, this historic quarter has been restored to its pre-war beauty. The problem these days is the crush of cruise passengers who invade the popular town. To limit their impact, Dubrovnik now imposes a limit of two ship arrivals a day.

Exploring the Old Town, visitors discover a wealth of art and artifacts in the Franciscan and Dominican monasteries, Rector’s Palace and 1673 Cathedral. The pharmacy in the Franciscan Monastery, dating back to 1318, is said to be the oldest working apothecary in Europe.

Film crews have captured the splendor of Dubrovnik, long known as the Pearl of the Adriatic, and surrounding area in Game of Thrones, Star Wars and Robin Hood. Some shore excursions visit the nearby seaside villages of Cavtut, Ston and Trsteno. 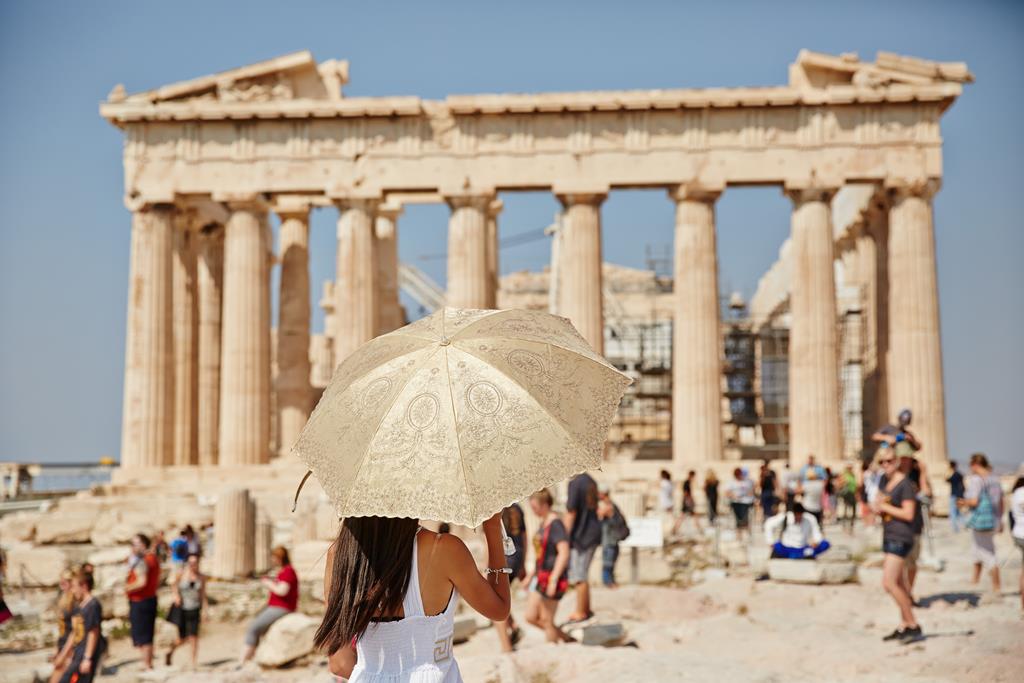 The gateway to Athens, a rather grimy place, is one of the Mediterranean’s busiest passenger ports and the launching pad for cruises to the Greek Islands. Central Athens is about a half-hour’s drive from Piraeus.

Most of the main sights in Athens, a sprawling, congested metropolis of 4.5 million, can be seen in a day. Cruise passengers make a beeline for the Acropolis, a hilltop where the Parthenon and other ruins of other 5th century B.C. buildings from Greece’s Golden Age inspire awe. The Acropolis Museum stands at the foot of the hill. Also just below the Acropolis is the Plaka, an Old Town district with narrow pedestrian streets full of tourist shops and tavernas.

Other Athens highlights include the Temple of Olympian Zeus; Old Olympic Stadium, host of the first modern Olympics in 1896; National Archeological Museum, which boasts the world’s largest collection of ancient Greek art; and changing of the guard ceremony at the Parliament Building on the city’s main square. 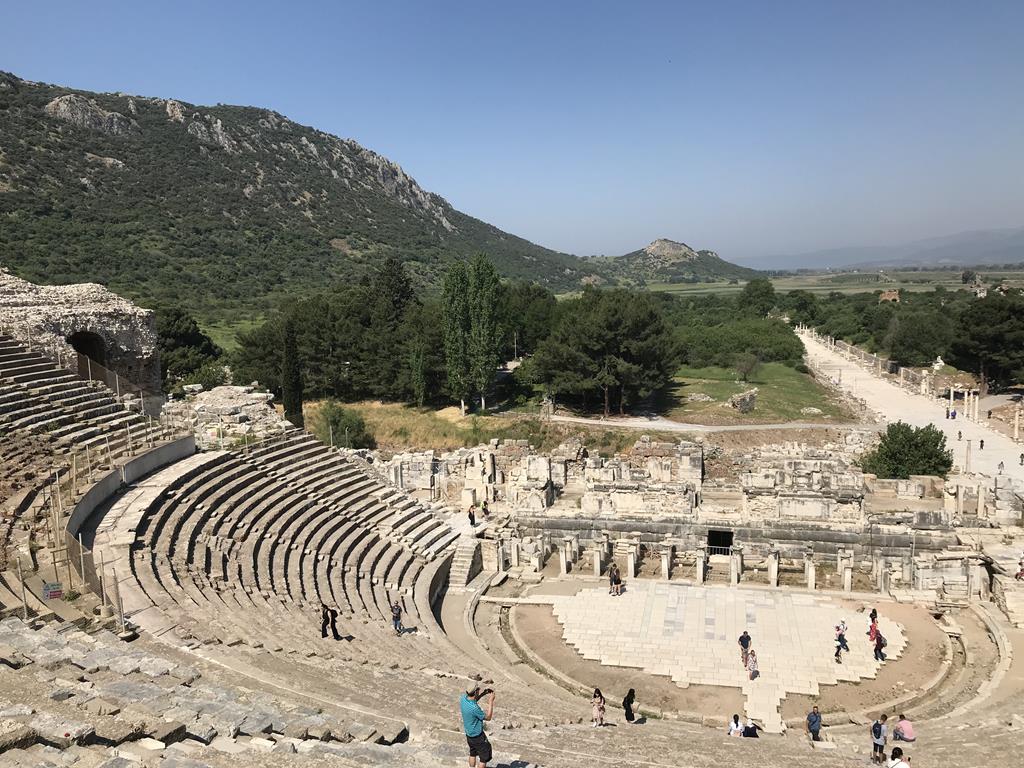 This Aegean port on the western coast of Turkey, a regular stop on the Eastern Mediterranean/Greek Islands circuit, serves as the stepping stone to the ruins of Ephesus, one of the most completely excavated Greco-Roman cities from antiquity. Shore excursions give passengers plenty of time to walk the ancient site’s colonnaded streets and prowl around the amphitheater. Everyone wants to frame the perfect photo of the Celsus Library’s magnificent two-story facade, which one guidebook compares to a “grandiose film set left behind after the shooting of a Roman spectacular.”

Often included in Ephesus excursions is the nearby House of the Virgin Mary, a Catholic pilgrimage site. A tiny church stands on the 1st century foundation of the home where Mary, according to legend, spent her final days after being brought to Ephesus by St. John the Apostle.

Happily for passengers arriving in Kusadasi, the town offers much to see and do just minutes from the cruise-ship docks. Minutes away by foot lies the idyllic little castle on Pigeon Island, which is connected to the coastal road by a causeway lined with tour boats. Walk from the cruise terminal in the opposite direction and the souvenir bazaars of Old Town await with carpets, jewelry, Gucci and Louis Vuitton handbag knockoffs, and “genuine fake watches.” Shop shelves contain onyx items, hookahs, fezzes, and ceramic bowls and plates in Turkish geometric designs.