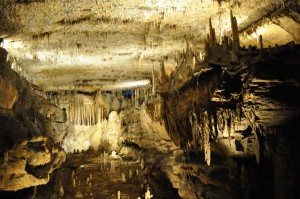 Only 45 minutes west of Louisville and less than 150 miles from both Indianapolis and Cincinnati, Marengo Cave holds an exciting day trip for any group touring Western Ohio or Tuckiana. The labyrinth of underground passages, discovered by two school children in 1883, was finally recognized by the Department of the Interior as a U.S. National Landmark 101 years later. The DOI called Marengo “the most profusely decorated cavern,” and for good reason.

Groups making a day of it in Marengo often take both of the cave’s main tours. Each tour is well lit, paved and won’t get you wet. The 40-minute Crystal Palace Tour winds through a series of formation-filled passageways before ending in the Crystal Palace—an enormous underground room brimming with stalactites and stalagmites. Lights are strategically placed throughout the room and the rest of the cave, and guides turn different sets on and off to provide a variety of spectacles.

The Dripstone Trail tour lasts an hour and shows groups everything from delicate soda straw formations to towering totem pole stalagmites. Guides will show you Pulpit Rock, where church sermons were once given inside the cave, and Music Hall, a section of cave with such good acoustics that community concerts were once held there. The tour ends under the only “penny ceiling” in the country. The right mix of minerals and water make the top of the passageway sticky, so guests can toss their own coins up to join the thousands already above them.

Hands-on groups may be interested in one of Marengo’s adventure tours. These excursions take guests through cramped, undeveloped sections of the cave. Participants should be ready to belly-crawl through muddy underground streams and rivers. Each guest is given a headlamp to use on the adventure tours and to keep as a souvenir. 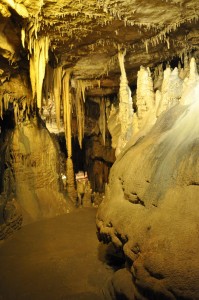 Two separate two-hour tours are available. The Underground Adventure tour passes through a stream and shows of some unusual cave dwelling life forms. The Waterfall Crawl starts by sending you down a vertical shaft into the muddy “Pig Pen.” Travel on and see an underground spring and waterfall.

Marengo features eight shorter crawling options, including popular routes such as The Masher and the Salamander Slide. Groups can test themselves on “The Crawl” cave simulator before committing to adventure tours. The wooden labyrinth was brought over from Belgium and simulates space and elevation changes that you might experience in undeveloped sections of the cave.

If some of your group isn’t up for the challenge of an adventure tour, they may enjoy a scenic canoe or kayak ride on the Blue River. Cave Country Canoes is Marengo’s sister facility and only five minutes from the cave. Both half- and full-day trips are available on the Blue River, which is known for its scenic views and the abundant wildlife on its shores.

Daniel Morrill is a senior Media Writing major at Taylor University in Upland, IN. He started working at Premier Tourism Marketing in May of 2012 as an Editorial Intern and regularly contributes destination features and sports content for the company’s Leisure Group Travel Magazine and InSite on Sports website.