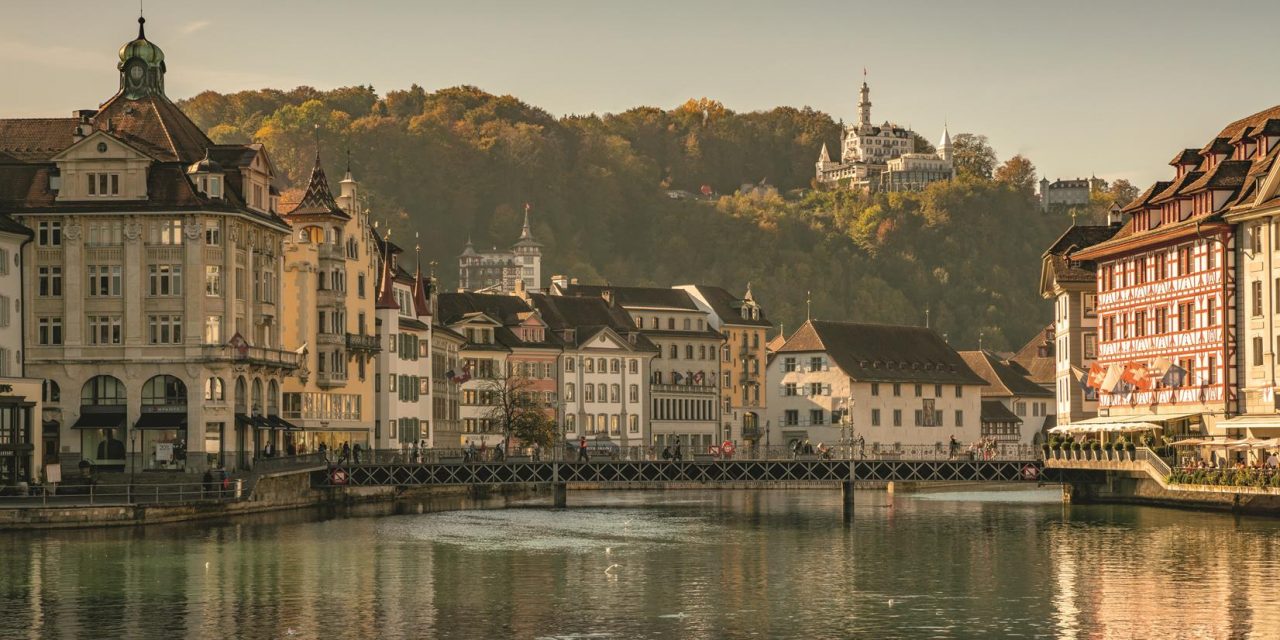 An enchanting and welcoming midsize Swiss city, Lucerne, situated on azure-blue Lake Lucerne, is a key tourist and transportation hub.

With its captivating history, spectacular Alps scenery and convenient location, Lucerne is a prime example of why Switzerland draws millions of visitors each year.

Located on the quintessential River Reuss in central Switzerland, Lucerne dates from the middle of the 8th century when a Benedictine monastery was built there to honor St. Leodegar. The small settlement officially became the town of Lucerne around 1178. A bustling gateway, Lucerne is easy to get to and makes a good base for day trips. An easy 50-minute train ride from Zurich, the city of 81,000 is a popular jumping-off point for 6,982-foot-high Mt. Pilatus, a landmark called the Dragon Mountain, and Mt. Rigi, nicknamed Queen of the Mountains.

Mt. Pilatus boasts the world’s steepest cog railway (with a gradient of 48 percent) and has restaurants and hotels at the top. There are 75 miles of hiking trails on 5,895-foot Mt. Rigi, the top of which can be reached by the Rigi Mountain Railway (inaugurated in 1871) or by an aerial cable car.

Both Mt. Pilatus and Mt. Rigi base stations can be easily accessed by boat, train or car. Not far from Lucerne at Mt. Titlis, visitors can enjoy a 360-degree panoramic view from a rotating gondola that glides over the deep crevasses of Titlis Glacier.

Another excursion possibility is the Swiss Knife Valley Visitor Center in Brunnen. The complex includes the museum and brand store of Victorinox, maker of the legendary Swiss Army Knife. Under the guidance of a professional, guests can assemble their own pocket knife in 15 minutes and have it personally engraved. A visit to this scenic region can be combined with a Lake Lucerne cruise. 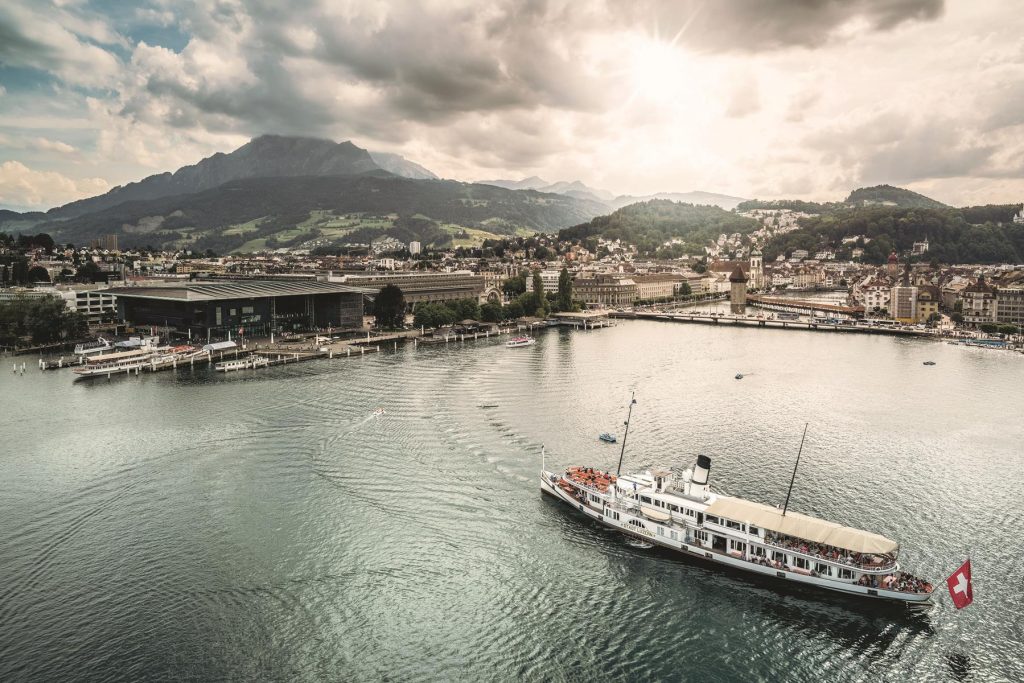 Lake Lucerne, one of Europe’s most awe-inspiring stretches of inland waterways, is 24 miles long and connects 33 villages and towns with a fleet of boats, some steam-powered. Passengers on the lake can go all the way to Fluelen on the other side to catch the SBB train to Italy.

Visitors to Lucerne have a wide range of educational, cultural and recreational possibilities. Nearly all the major sights in Lucerne are within walking distance of downtown, located right across the Chapel Bridge, which was built in the first half of the 14th century and once formed part of the city’s fortifications. The adjacent 111-foottall Water Tower, the most photographed landmark in Switzerland, was built around 1300 and was used at various times as a treasury, archives and prison.

The Old Town is a beautiful part of the city with narrow, car-free streets displaying well-preserved buildings decorated with fresco paintings. Here you can enjoy quaint plazas, ornate statues, bubbling fountains and shops that sell Swiss chocolate, clothing, jewelry, cameras and watches. There is also an abundance of bakeries and quaint cafes and restaurants.

The famous Musegg Wall was part of Lucerne’s ramparts from 1386. Three of its towers are open to the public, with a city clock from 1535 still attached to one. Visitors have fantastic views of Lucerne from these ancient walls.

The Church of St. Leodegar, built in 1633, is noted for its late German Renaissance altars and art, as well as bringing the Counter Reformation to Switzerland. Other important churches are the 13th century Franciscan Church, which was once Lucerne’s city hall; the twin-domed, Baroque-style Jesuit Church; the 1912 St. Paul’s Church, with its intricate glass paintings; and St. Matthew Church, the first Protestant church in the city. Switzerland’s only saint, Brother Klaus, was from the Lucerne area.

The Swiss Museum of Transport is a notable Lucerne attraction, drawing half-a-million visitors each year. It features rail, air, water and road transportation, plus space travel and telecommunications. As many as 60 steam and electric locomotives are on display. Switzerland’s first IMAX theater is also part of the museum.