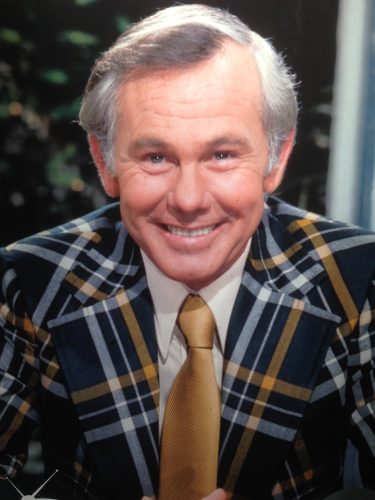 When Johnny Carson was hosting The Tonight Show for all those years between 1962 and 1992, I stayed up past my bedtime many a night to catch his monologue, the celebrity guests, hilarious sketches and banter with sidekick-announcer Ed McMahon. No other late-night host since has come close to winning my affection and making me laugh.

In fact, I had tears in my eyes chuckling at excerpts from a Carson video being shown in the gift shop before I even entered the museum proper during a recent visit. I was at Chicago’s Museum of Broadcast Communications to see the touring exhibition Here’s Johnny: The Making of the Tonight Starring Johnny Carson.

The exhibit, on view in Chicago through Oct. 15, has been created by Jeff Sotzing, Johnny’s nephew, former Tonight Show producer and current president of Carson Entertainment. The museum tour is organized by Fullerton Museum Center in Fullerton, California, where the exhibition first launched.

The exhibit is not big, but it includes video snippets from some of the shows, a lot of photographs and costumes from memorable Carson characters like Aunt Blabby’s granny dress and Floyd R. Turbo’s hunting coat and cap. Also displayed is a replica of Carnac the Magnificent’s turban, on loan from the University of Nebraska. (The Carnac sketch, with Johnny as the all-knowing, all-seeing soothsayer, was always my favorite.) Flamboyantly dressed bandleader Doc Severinson was an integral part of the show, and one of his jackets – a shiny magenta one with black sequins – is enshrined in one of the glass cases.

Other artifacts include Carson’s coffee mug, his Rolodex of Hollywood’s elite (open to Elizabeth Taylor) and reproductions of the May 8, 1987 monologue script and cue cards (with jokes about the Iran-Contra case that plagued the Reagan Admininstration). Johnny’s makeup kit from the 1980s contains a roll of Wint-O-Green Lifesavers. Also on view is his typewriter from the 1950s.

One wall is covered with Johnny interviewing guests like Muhammad Ali, Frank Sinatra, Woody Allen, Bob Hope and Milton Berle. A revealing video shows Johnny arriving at the studio parking lot and prepping for the show with his staff.

Another video shows Carson bidding his fans farewell on the final show, May 22, 1992. Reflecting on his 30 years as the undisputed King of Late-Night TV, he said, “I am one of the luckiest people in the world. I found something I always wanted to do, and I have enjoyed every single minute of it.” 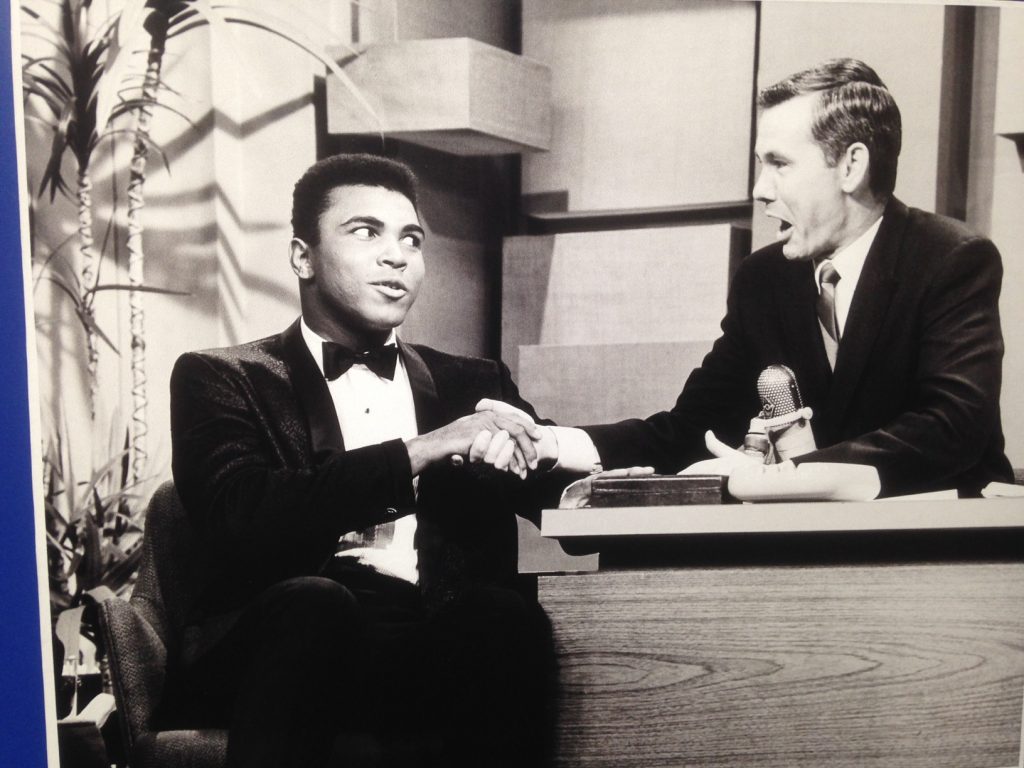 A museum theater outside the exhibit area shows classic Carson clips on a large screen.

Bruce DuMont, president of the Museum of Broadcast Communications, said, “Carson helped define and refine the late-night-talk-variety format that everyone uses today. Jimmy Fallon, Stephen Colbert, Jimmy Kimmel, Drew Carey and Ellen DeGeneres would quickly say they owe Johnny Carson a debt of gratitude. You can see his influence on late-night television every night…..You can’t underestimate his impact. Twenty million viewers tuned in to see Johnny during his last week, compared with shows today averaging three or four million.”

The Museum of Broadcast Communications, a treasure house of radio and TV history, is one of the great overlooked attractions in a city more famous for temples of culture like the Field Museum, Art Institute of Chicago and Museum of Science & Industry. You can see vintage commercials and clips of pioneering game shows like What’s My Line?, I’ve Got A Secret and You Bet Your Life with Groucho Marx. One room might be showing video of Carol Burnett reminiscing about her career. TV newscasts from the 1980s or excerpts from the 1960 Nixon-Kennedy debates show television’s role in political history. All kinds of advertising memorabilia, from the Pillsbury Dough Boy to the Jolly Green Giant, also bring back memories. Of interest to baby boomers who grew up in the Chicago area watching WGN-TV are exhibits on kids’ shows like Bozo’s Circus, Garfield Goose and Ray Rayner and His Friends.

The museum has a section on TV advertising icons like the Jolly Green Giant.

For information on the Museum of Broadcast Communications, visit www.museum.tv.com.