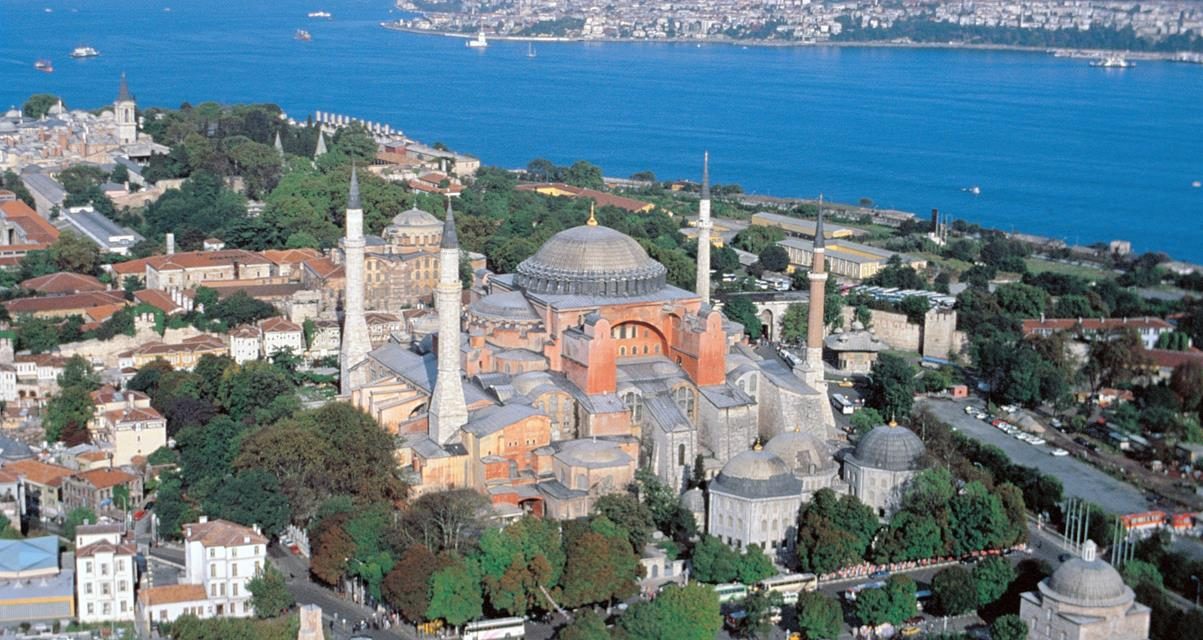 Poised at the crossroads of Europe and Asia, Turkey’s largest city offers a magic carpet ride into the Muslim world

A labyrinth of arched alleyways lined with stalls lit by garish light bulbs and manned by insistent merchants, the Grand Bazaar plunges the wayfarer into a heady realm of Turkish delights. Providing a kaleidoscopic peek into the culture of a proud country, the centuries-old marketplace is a photographer’s dream. Wide-eyed tourists explore with wonder, gaping at sculpted mounds of brightly colored spices and tea powders, heaps of dried fruits and nuts, stacks of oriental carpets, shelves of ceramics and brassware, and hundreds of tiny jewelry shops purveying gold and silver. 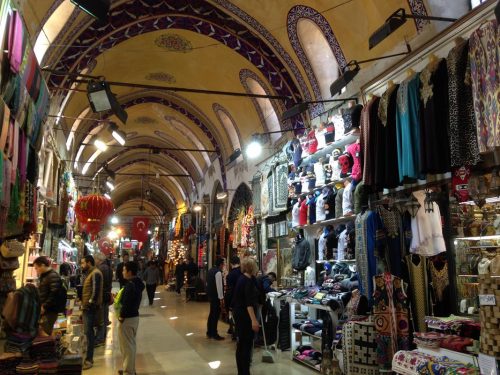 The famous bazaar is just one of many sights that merits the word “grand” in Istanbul, once the capital of two great empires—Byzantine and Ottoman—and today one of the largest cities on Earth with an estimated 16 million people. Conveniently for visitors, the top attractions are stashed within a compact area of the Old City. Key monuments of antiquity, within walking distance of the Grand Bazaar, are clustered on a triangle of land where the Bosphorus, the strait separating the European and Asian sides of Turkey, meets an inlet called the Golden Horn.
An important stop on the ancient Silk Road, Istanbul has always been a center of commerce, and the Grand Bazaar is the forerunner of the modern shopping mall. Built shortly after the Ottoman Turks conquered the region in 1453 and reconstructed in the 19th century, the largest covered bazaar in the world encompasses more than 60 streets and 4,000 shops. It’s easy to get lost in the nooks and crannies, but that’s half the fun. The Grand Bazaar, though, can be overwhelming, and you may need to step out into the sunlight now and then through one of its 22 gates.

Prowling the maze-like emporium, you may be tempted by brocaded slippers, leather bags and jackets, onyx objects or inlaid-wood backgammon sets. There are caftans, fezzes and hookahs (tobacco water pipes). How about a spangly belly-dancing outfit? The place brims with knock-offs of designer handbags and clothing advertised as “genuine fake.” Customers are expected to haggle over prices.
Grand Bazaar confectioners hawk lokum, a gel-like, cube-shaped candy that we call Turkish delight. Dusted with powdered sugar, it comes in a variety of flavors, from apricot to fig to pomegranate. Samples are given out freely. The historic Sultanahmet zone, the true tourist core of Istanbul, is home to a trio of can’t-miss sights—Topkapi Palace, the Blue Mosque and Hagia Sophia. 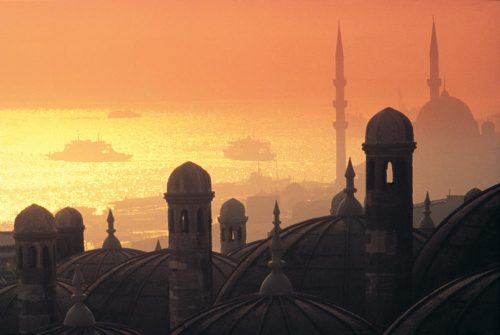 Topkapi Palace, its marble-paved terraces overlooking the Bosphorus, was the showplace residence of the sultans and nerve center of the Ottoman Empire from 1459 until 1856. A hodge-podge of stately buildings interspersed among gardens and grassy courtyards, the walled complex can be an all-day affair, but a guided tour will show you the highlights.
Everyone wants to see Topkapi’s fabled Harem, the compound that housed the sultan, his wives, children, servants, concubines and eunuch slaves. The Harem’s most impressive chamber is the Imperial Hall, where the sultan entertained visitors. It is decorated with gilt, mosaic tiles and Quranic inscriptions.
The palace’s Treasury displays four imperial thrones, jewel-encrusted weapons, one of the world’s largest diamonds and the Topkapi Dagger, its handle embedded with three enormous emeralds. In the Pavilion of the Holy Mantle, a sacred pilgrimage site, reside some of the holiest relics of Islam, such as hairs from Prophet Mohammed’s beard, one of his teeth and two of his swords. 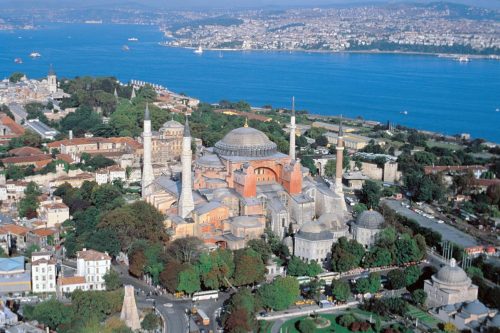 A short walk from Topkapi Palace leads to the Hagia Sophia, the greatest work of Byzantine architecture and for 900 years the largest church in Christendom. An engineering marvel built from 532-537, the cathedral, with its vast central dome and mosaics of biblical figures and Byzantine rulers, hosted imperial coronations after the Roman Empire’s capital was moved from Rome to Constantinople—the city’s name before the Ottoman conquest in 1453.
The Ottomans converted the church into a mosque (adding minarets), but since 1935 it has been a museum. Sheer awe strikes those who enter the huge, dimly lit nave for the first time. Eight giant discs are adorned with Arabic calligraphy, while the 9th-century apse mosaic represents the Virgin Mary and Christ Child. A long sloping ramp leads to the brighter upstairs gallery that has exquisite mosaics like the 13th-century piece showing Christ flanked by Mary and John the Baptist.
Across the park from the Hagia Sophia lies Sultanahmet Mosque, called Blue Mosque by Westerners because of blue tiles adorning much of its interior. Gracing the skyline with six minarets, a majestic main dome and succession of half-domes, it is the city’s most visited sight. Plushly carpeted, the cavernous space is noted for its 260 stained-glass windows, ceilings painted with floral patterns and excerpts from the Quran.
For a snack in the Sultanahmet area, try one of the pushcart vendors offering roasted chestnuts, corn-on-the-cob or bagel-like bread rings coated with sesame seeds (simit). The most popular street food is the doner kebab sandwich, slivers of grilled chicken or lamb shaved off a rotating spit and served in pitalike bread or rolled up in a flatbread wrap called a durum. Kebabs also may be grilled on skewers over charcoal.
Many visitors are intrigued by the cats wandering the streets of Istanbul. Favorite photo subjects and objects of tourists’ affection, they are seemingly well-fed. You see the kitties jumping across rooftops, lounging on the steps of mosques, devouring scraps from fishing boats and brushing against your feet at outdoor restaurants. They even make themselves at home in the Hagia Sophia.
From Galata Bridge on the Golden Horn, tour boats provide a good way to escape the urban frenzy and admire the mosques, marinas and mansions on the Bosphorus. Cruises offer great views of the fabled skyline, and at the strait’s narrowest point your boat passes the walls of 15th-century Rumeli Fortress.
Tour groups bound for Istanbul, the gateway to Turkey and the Middle East, soon will be arriving at the city’s brand-new airport, the first phase of which opens October 29, 2018. Upon completion, Istanbul New Airport (or Istanbul Yeni Havalimani) will be the world’s largest airport under one roof.
Turkish Airlines offers nonstop flights between Istanbul and nine U.S. cities—New York, Boston, Chicago, Washington, D.C., Atlanta, Miami, Houston, Los Angeles and San Francisco. For the last nine years running, Turkish Airlines has been rated Southern Europe’s Best Airline by Skytrax, which evaluates global airlines and gives out annual awards; it was recognized as the best in all of Europe every year between 2011 and 2016. Turkey’s national flag carrier serves more countries (121) than any other airline. (www.turkishairlines.com)
An excellent guidebook is Rough Guides’ pocket-size Istanbul by Terry Richardson. Full of color photos and with a pullout map inside the back cover, the 175-page volume concisely describes the most important sights, giving opening hours and admission costs, and has recommended cafes, restaurants and shops. Also useful is the glossary of Turkish words. (www.roughguides.com).
For information on tourism in Turkey, visit www.hometurkey.com/en
by Randy Mink