While Iowa is best known for corn and other crops, the lives of many notable Americans also took root in the Hawkeye State. Native sons and daughters who went from humble beginnings to the national stage include TV and movie stars, sports greats and even a president of the United States. 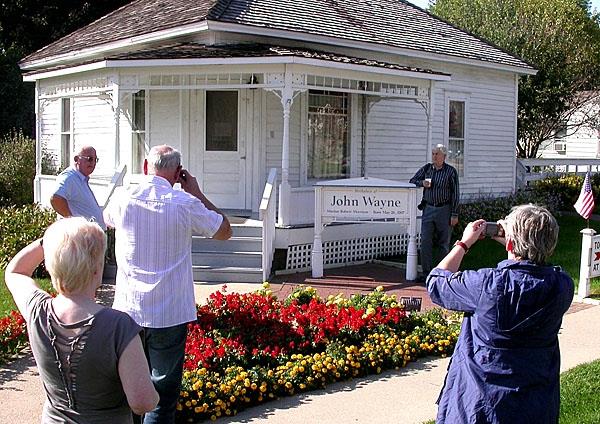 A recent trip in search of Iowa’s famous people took me to towns a bit off the radar screen. In doing some pre-trip research, I noticed that most of the childhood homes celebrate folks who made a big splash in the middle of the 20th century, so as a baby boomer who watched a lot of TV and read newspapers, I grew up knowing their names. Visits to these shrines, therefore, have special appeal to those of us from a certain generation.

Some of the towns have named streets for their hometown heroes. You might find yourself driving down John Wayne Drive, Glenn Miller Avenue or Johnny Carson Boulevard. Annual festivals or birthday observances pay tribute to the local who made good.

For several decades, no movie icon loomed as large as John Wayne, who weighed in at a hefty 13 pounds when he entered the world on May 26, 1907 in Winterset, about 45 minutes southwest of Des Moines. Nostalgia for the Old West and Hollywood’s Golden Age casts a spell on visitors to the John Wayne Birthplace, a modest, four-room cottage where the man who came to embody the American spirit was born Marion Robert Morrison.

A tour guide talks about the man and his family as well as his Hollywood career. You learn that the Morrisons moved to California when Wayne was four and how he got the nickname “Duke” growing up in Glendale. He had seven children, one of whom, California lawyer Aissa Wayne, is actively involved in birthplace affairs. Guests are given time to peruse photos, movie props and personal artifacts. On display are suitcases used in Stagecoach (1939), Wayne’s cavalry hat from Rio Lobo (1970) and his eye patch in True Grit (1969). The furniture is not original to the family.

In the visitor center/gift shop next door, you might be moved to pick up a DVD of a John Wayne movie, a collector plate or life-size cut-out. Around the block is a bronze statue of a rifle-toting Wayne, which will greet visitors to the brand new John Wayne Birthplace Museum when it opens next year. 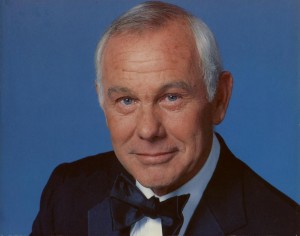 The next stop, 60 miles southwest of Winterset, is the Johnny Carson Birthplace in Corning (pop. 1,400). Located a few blocks north of a charming downtown highlighted by the renovated Corning Opera House, the home of the Tonight Show host, a bedtime favorite of mine and millions of others from 1962 to 1992, sits at Davis Avenue and 13th Street. Built in 1904, the two-bedroom, white frame house has been closed for restoration, though I was able to tour the gutted space in April. The reopening was set for Memorial Day weekend. Guests can view exhibits, watch TV clips and pose with a Carson cut-out at his desk.

Born in 1925, the “King of Late-Night Television” lived in Corning only eight years, but he donated money to the local library and elementary school and funded the Carnac Family Skate Park, named after Carson’s physic character, Carnac the Magnificent. 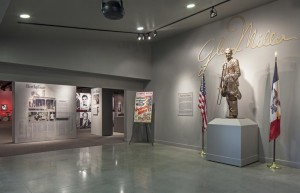 In Clarinda, about 45 miles southwest of Corning, the most popular dance band leader of all time is remembered at the state-of-the-art Glenn Miller Birthplace Museum, which opened in 2010 next door to the restored home where Alton Glenn Miller was born on March 1, 1904. Touring the galleries, you’re serenaded by Moonlight Serenade (his theme song), In the Mood and other tunes popularized by the Glenn Miller Orchestra, which was the rage from 1939-42, the height of the Big Band era.

On display are the trombone Miller played in the Army Air Force band he started during World War II, framed records and sheet music of hit tunes, a 2003 Grammy Lifetime Achievement Award and posters of two movies in which Miller and his band appeared—Sun Valley Serenade and Orchestra Wives. (The catchy Chattanooga Choo Choo was performed in Sun Valley Serenade.) A one-hour documentary made for public television can be shown to groups. The annual Glenn Miller Festival in June has made the American Bus Association’s (ABA) Top 100 Events four times.

Most of the landmark birthplaces are humble abodes—houses that hardly stand out. But in Shenandoah, about 20 miles west of Clarinda, the Everly Brothers Childhood Family Home is really tiny. Said one neighbor: “That house was so little that the Everlys had to go outside to change their minds.”

Relocated next to the Greater Shenandoah Historical Museum on downtown’s Sheridan Avenue, the plain white home of Don and Phil Everly is being restored. The singing duo, charter inductees of the Rock and Roll Hall of Fame, made their mark with 1957 hits “Bye Bye, Love” and “Wake Up, Little Susie.” (Both in their 70s, they live in the Nashville area.)

Take a walk down Sheridan and have fun reading the yellow-and-brown sidewalk plaques that make up the Iowa Walk of Fame, part of the streetscape project in this town of 5,100. More than 125 Iowa-shaped plaques are inscribed with names of luminaries, from football star Kurt Warner (Cedar Falls) to Ann Landers/Dear Abby (sisters from Sioux City).

Driving into Denison (pop. 8,300) in Western Iowa, you’ll notice the town’s slogan—“It’s a Wonderful Life.” The iconic 1946 Christmastime movie of the same name starred a hometown girl, Donnabelle Mullenger, later known as Donna Reed. Many of us know her as the neatly dressed mom on The Donna Reed Show(1958-66), which I still watch in reruns on cable TV. 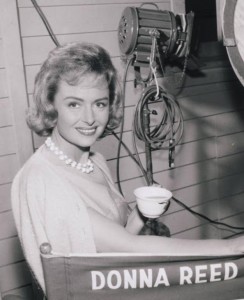 Donna Reed Center for the Performing Arts, housed in a restored 1914 opera house, features awards, movie stills and other memorabilia in a small storefront museum. A six-minute video narrated by her daughter is normally shown on a TV but can be projected on the theater screen for groups, who may also request a theater tour. Reed’s Oscar for Best Supporting Actress in From Here to Eternity is on display at the McHenry House, the town’s historical museum.

On the opposite side of the theater entrance, groups can have lunch at Reiney’s, a reincarnation of a soda fountain enjoyed by generations of movie goers, including Donna Reed. Born in 1921on a farm south of town (on what is now Donna Reed Road), she was proud of her roots and visited Denison often during her career.

My next stop brought back memories of another household name. The Mamie Doud Eisenhower Birthplace in Boone, about 50 minutes northwest of Des Moines, is furnished with some original family items, including the bed where the wife of President Dwight Eisenhower was born on Nov. 14, 1896. Famous for her trademark bangs and preference for pink, she was the last First Lady born in the 19th century.

After a guided tour of the simple home, which was moved from its original location across the street, groups can explore the basement museum, which showcases evening gowns, magazine articles and “I Like Ike” campaign buttons. 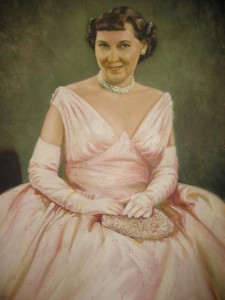 The Eastern Iowa town of West Branch celebrates another local who made it to the White House. The Herbert Hoover Presidential Library and Museum honors our nation’s 31st president, who served from 1929-1933. Visitors can view a 22-minute film and exhibits that depict not only Hoover’s political career but also his heroic work in spearheading relief programs to feed Europeans over the course of two world wars.

The adjacent National Park Service site contains several buildings from Hoover’s youth, including the tiny Birthplace Cottage where he was born in 1874 and Quaker meetinghouse where he worshipped. Hoover and First Lady Lou Hoover are buried near the museum.

The Dutch-flavored town of Pella, 45 miles southeast of Des Moines and famed for its Tulip Time Festival, is home to Pella Historical Village, a collection of buildings (including a giant windmill) full of treasures that tell the stories of pioneer Dutch immigrants. A row house original to the site contains the Wyatt Earp Boyhood Home, a place of interest to those who remember the 1955-61 TV series about the Wild West lawman played by Hugh O’Brian. (I prized my long-barreled Wyatt Earp plastic pistol.) Or perhaps you’re more familiar with the 1994 movie Wyatt Earp starring Kevin Costner. The Earps lived in the house before and during the Civil War; in its Gun Room you can see rifles, a sword and various wartime artifacts, along with photos of Earp.

Van Meter (pop. 1,016), on the outskirts of Des Moines, salutes a hometown boy who set many records pitching for the Cleveland Indians from 1936 to 1956.  The modern Bob Feller Museum has a 20-minute video and brims with memorabilia (much of it autographed and for sale) associated with “Rapid Robert” (1918-2010) and other Hall of Famers from his era.