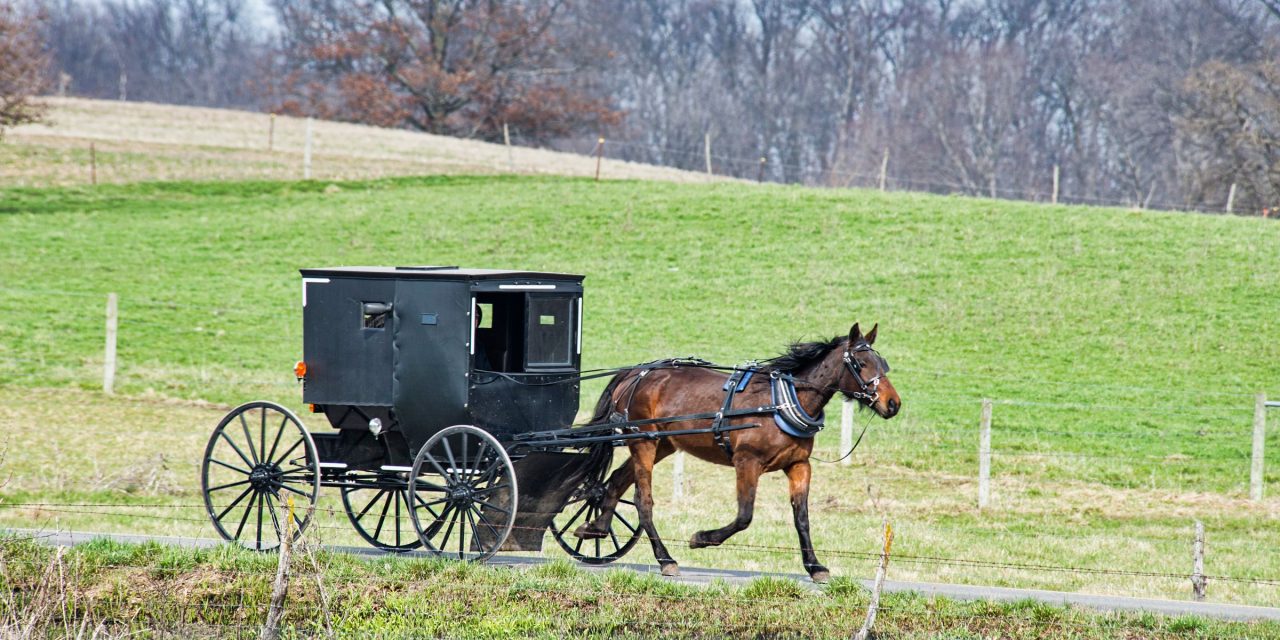 Slices of yesteryear and encounters with another culture enchant travelers in Shipshewana, a little town big on food, shopping and entertainment

The slower tempo creates a comfort zone for travelers seeking the pleasures of simpler times. Enhancing laid-back itineraries are wholesome entertainment, great shopping and eye-opening peeks into a culture that clings to its traditions.

Your most vivid memories revolve around the lifestyles of the Amish and Mennonites. With fondness, you’ll recall black buggies rattling down country roads, Amish boys on bikes, clotheslines with laundry flapping in the breeze and a bearded farmer manning his horse-drawn plow. For up-close encounters with the “plain people,” tourists have opportunities to eat in an Amish home or visit Amish stores and workshops. And who can forget the homemade pie? 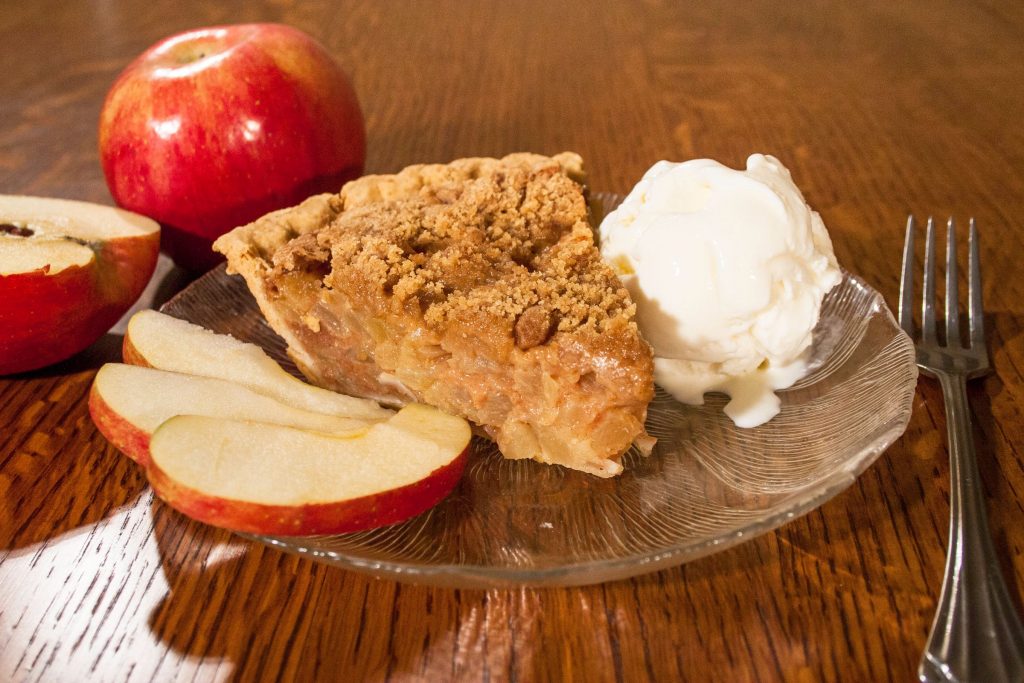 Whether you’re dining in an Amish home or an Amish-style restaurant like the Blue Gate, a meal is not complete without a slice of pie. From Dutch apple (above) to pecan, pumpkin and sugar cream, the variety of choices is staggering. (Photo credit: Blue Gate Hospitality)

La Grange and neighboring Elkhart County claim the nation’s third-largest Amish community; only Ohio and Pennsylvania have more Amish folks. Of La Grange County’s 40,000 residents, 49 percent are Amish. Shipshewana (pop. 703), with a wealth of hotels, restaurants, shops and attractions, is a tourist magnet.

A guided backroads tour provides the perfect introduction to Amish Country. Your step-on guide has the answer to all things Amish, pointing out curiosities the casual visitor would never notice. That was the case on our tour led by Lora Stutsman, a step-on who works with Shipshewana’s Blue Gate Hospitality, an operator of several tourism-related businesses.

A few minutes after departing from the Blue Gate Garden Inn, we were at Lambright Country Chimes, which makes 37 different kinds of wind chimes. We watched Amish teens string the aluminum rods while Amish owner Orley Lambright, formerly in the RV industry, explained the operation, which employs 13. He sells the melodious chimes to over 800 dealers in the United States and Canada. 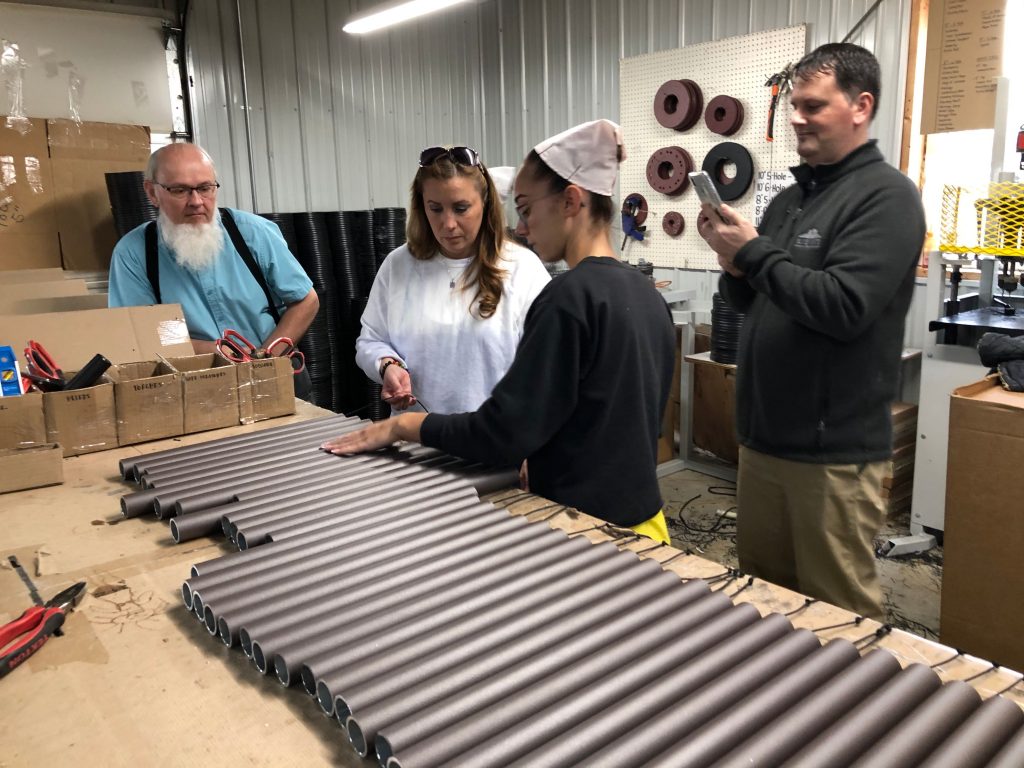 La Grange and Elkhart counties account for most of the RVs manufactured in the U.S. Out the bus window you’ll see factories and dealerships with fields and fields of gleaming white vehicles. Lora said the local RV companies employ many Amish, who lend their skills to the cabinetry and other motorhome features. It’s common for them to work full-time at the factory and do farming part-time. In Middlebury (Elkhart County), industry giant Jayco Inc. offers a trolley tour of its plant.

As we traveled from place to place, Lora filled us in on Amish ways. Though the Amish shun electricity and many forms of modern gadgetry, some do use battery-powered solar panels to heat their houses and run appliances, and some have cell phones, especially those in the more progressive western side of La Grange County. Lora pointed out homes with a dawdy house—an addition to the main house for grandparents. In the eastern part of the county, which has more Old Order Amish, the houses are white, whereas tan ones are allowed on the western side. The local bishop sets the rules. Sunday religious services are held in homes, not churches.

People typically have seven to 10 children, Lora said, and until eighth grade, they attend either public school or one of the 80-plus Amish schools in the county; some go on to high school. Children speak English in school and Pennsylvania Dutch, a dialect of German, at home. Dressing plainly, the men have pants with no zippers or belts. Amish women and girls wear bonnets and solid-color dresses (Mennonite women may wear print dresses). Tourists are advised to not photograph people’s faces, though distant shots of buggies and houses are okay. You’ll see Amish families shopping at stores in town, eating at restaurants, and going about chores like everyone else. 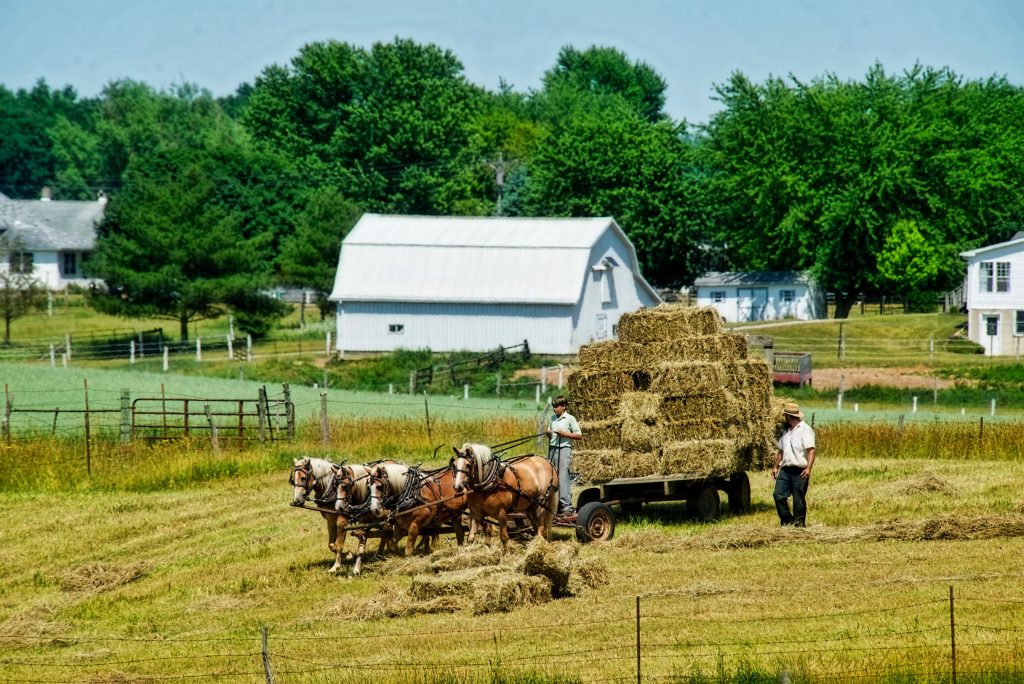 From Lambright’s workshop, our backroads tour continued on to Teaberry Wood Products in Middlebury, where Mennonite LaVern Miller (a pastor) creates works of art, mostly baskets with a woven look, from walnut, cherry, and maple. Other wooden items include puzzles, animals, and Nativity sets, and other religious items.

Also in Middlebury, we stopped at Dutch Country Market, an Amish-owned bulk foods store run by Norman and Katie Lehman and their six children. The shop is best known for its noodles, which you can watch being made in the morning. The Lehmans produce their own jams, honey and peanut butter spread as well. The latter, sometimes called Amish peanut butter, is made with marshmallow fluff and corn syrup. 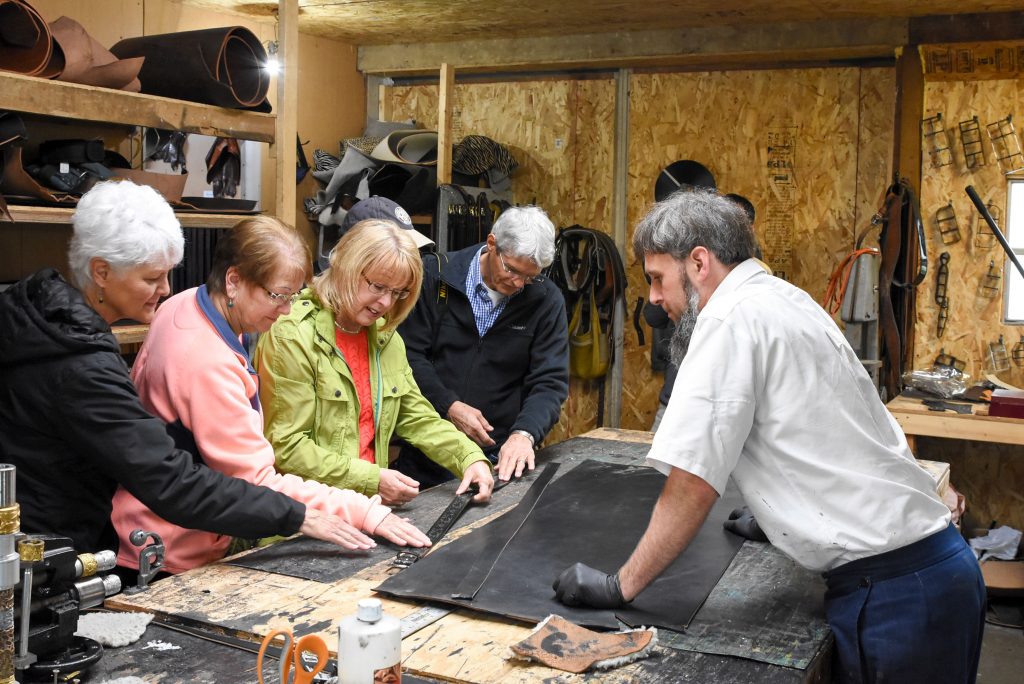 At Silver Star Leather, our last stop on the backroads tour, Amish owner Loren Yoder showed us how he makes a belt in two minutes. Besides cow leather, he works with exotic hides, ranging from ostrich, cobra, and alligator to hippo, elephant, and shark. I bought a Cape buffalo belt that will last me for years. Yoder also makes handbags, purses, wallets, and pillows.

Having a meal in an Amish home is another way to experience the culture. Many homes have a separate banquet facility on the property for hosting tour groups and individual travelers. The Ray and Linda Miller family’s Hoosier Banquets & Catering, for example, can serve up to two busloads. In the building next to their house, our group had something called poor man’s steak (ground beef coated in fried cracker crumbs and marinated with mushroom soup), plus grilled and fried Italian chicken in Italian dressing. Other meats on the catering menu include BBQ grilled chicken, meatloaf, meatballs, roast beef, ham, and Salisbury steak. We started with a lettuce salad with French dressing. Our sides for passing were mashed potatoes, corn, and noodles in chicken seasoning. There was butter and apple butter for the luscious hot rolls. Dessert was apple pie with streusel topping.

Not only did we chow down but had chances to ask questions about Amish customs. We even were allowed to tour the Millers’ house, which was more modern and spacious than we had expected. We saw an open Bible, religious sayings on the walls and lighting fixtures powered by propane; there was no TV. 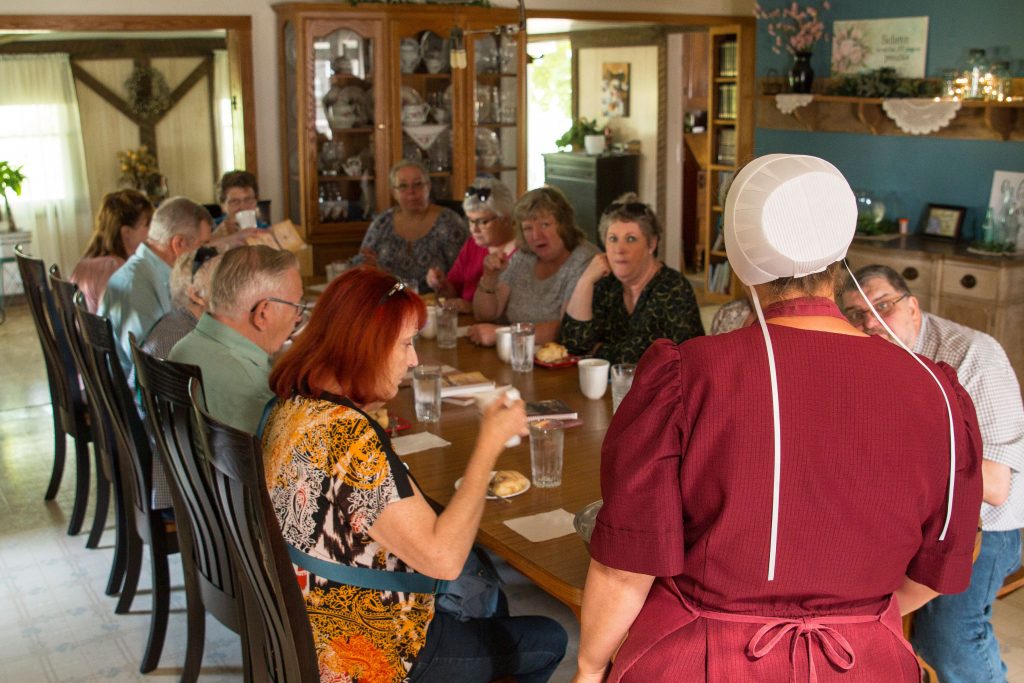 For many tourists, a hearty meal served in an Amish home is the highlight of a Shipshewana visit, a memory they will treasure for years to come. (Photo credit: Blue Gate Hospitality)

Fans of limitless portions of stick-to-the-ribs food also will find their slice of nirvana at downtown Shipshewana’s Blue Gate Restaurant, a must on any itinerary. The buffet offers everything from fried chicken, meatballs and BBQ pulled pork to mac ’n’ cheese, chicken dressing, buttery egg noodles, and mashed potatoes with gravy. (Though it seems like a lot of starch, you’ll notice locals piling the noodles on top of their mashed potatoes.) Save room for pie—it’s hard to decide between the choices. Coconut cream, peanut butter, Dutch apple, blueberry, sugar cream, and the list goes on. The Blue Gate’s bakery offers more irresistible taste treats, including handheld fry pies with fillings like raspberry, chocolate, and lemon.

In the same building, the intimate Blue Gate Music Hall stages Amish-themed and Christmas musicals, plus tribute shows saluting stars like Elvis Presley, Frank Sinatra, Barbra Streisand, and Neil Diamond. Down the street, the new 1,500-seat Blue Gate Performing Arts Center is next to the Blue Gate Garden Inn and features national headliners across music genres ranging from gospel and contemporary Christian to bluegrass, country, and rock. The lobbies of both theaters display signed photos and guitars of past performers. 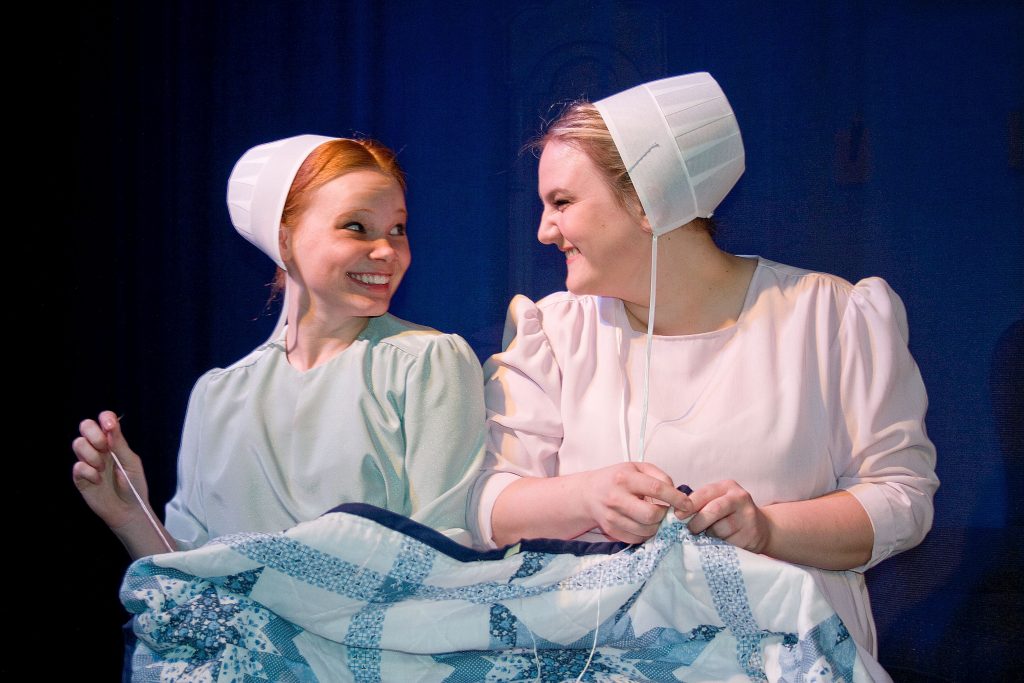 The hallways and guest rooms of the Blue Gate Garden Inn are adorned with beautiful Amish Country photos. My room was decorated with scenes of a windmill, a girl in a pony cart, and an Amish frame home. The inn’s first-floor lounge, across from the ice cream parlor, has photos of Blue Gate concert performers, including Kenny Rogers, Loretta Lynn, and Charlie Pride.

In one of the inn’s conference rooms, we noticed ladies working away at sewing machines. They had come from all over the country for a quilting workshop. Another group of quilters was gathering at the nearby Farmstead Inn & Conference Center, which is next to Menno-Hof, a museum that tells the Amish-Mennonite story.

Perhaps Shipshewana is best known for hosting the Midwest’s largest flea market. Every Tuesday and Wednesday from May to September (and certain weekends), up to 700 vendors man booths at the Shipshewana Flea Market, which is celebrating its 100th year in 2022. They sell everything from antiques and collectibles to gardening tools and yard ornaments. The food courts serve pork burgers, pork tenderloin sandwiches, sloppy joes, BBQ chicken, and fry pies. In the auction building, farmers buy and sell at the year-round Wednesday livestock and Friday horse sales. There’s also a Wednesday antique auction year-round. 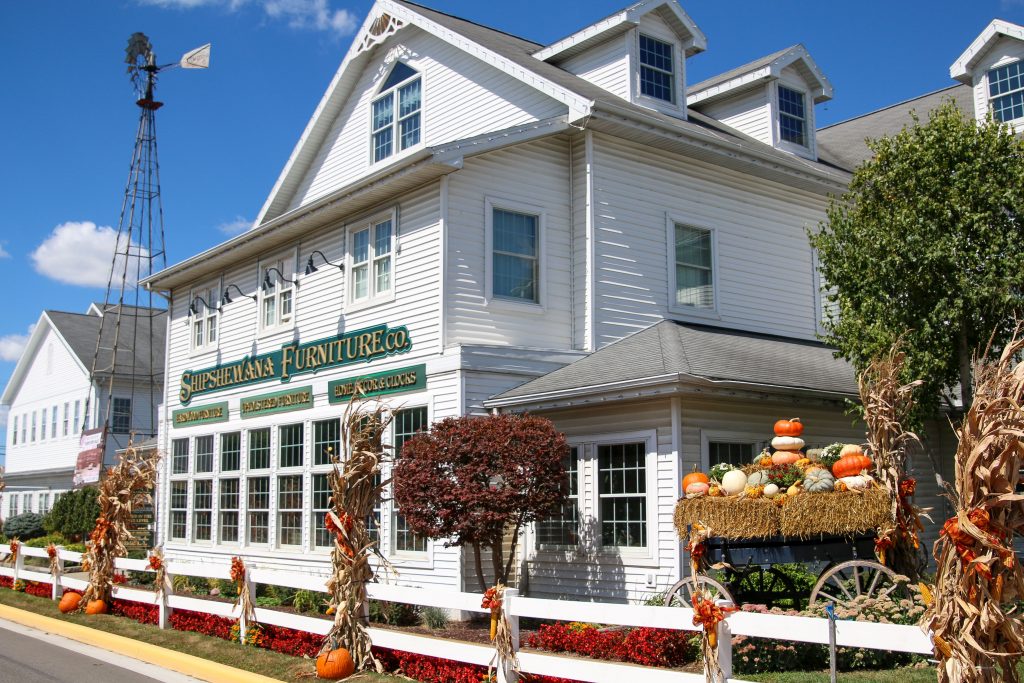 Next to the flea market are two prime shopping destinations—Yoder’s Meat & Cheese Co. and a two-level indoor mall, Yoder’s Red Barn Shoppes. For the largest selection of bulk foods, head down the road to E&S Sales. Downtown Shipshewana abounds with specialty shops.

More information is available from the website of the Shipshewana & La Grange County Convention & Visitors Bureau.