Hot Spots Along the Mother Road 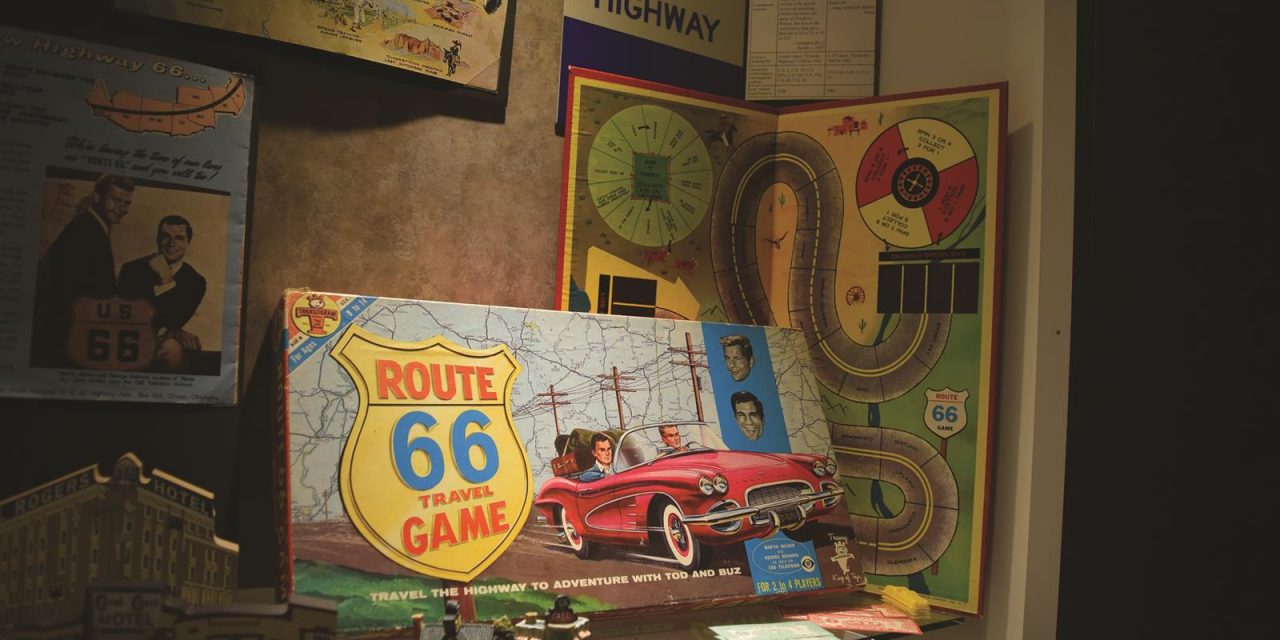 Seasoned travelers know it’s not about the destination, it’s about the journey

The historic highway that runs from Chicago to Los Angeles has long been seen as a symbol of escape, optimism and freedom. It also represents opportunity — not only for travelers, but for dozens of roadside attractions that set up shop along the road. Missouri entrepreneur John Woodruff first helped promote the idea for the highway in the 1920s. By 1938, the entire road was paved, and Midwesterners were using it to migrate or vacation in the Southwest. Realizing drivers would need motels, diners and services along the way, business owners flocked to the roadside, bringing life to formerly isolated communities along the route. The road became crucial for transporting goods and military supplies during the second World War. After the war, families found themselves with more income and leisure time, and the route boomed as vacationers embarked on the tradition of the Great American Road Trip. Much of Route 66 remains and travelers can still drive the famous road along Interstate 44. The remaining roadside attractions offer road-trippers an experience of true Americana on the Main Street of America.

Carthage Decades after the post-war boom, this classic symbol of American culture combines cars, movies and concession stands. With an enormous 66 sign on the back of the projector screen, the Carthage drive-in is one of the last of its kind. The screenhouse, playground and parking lot date back to 1949, so it still has much of its original character. 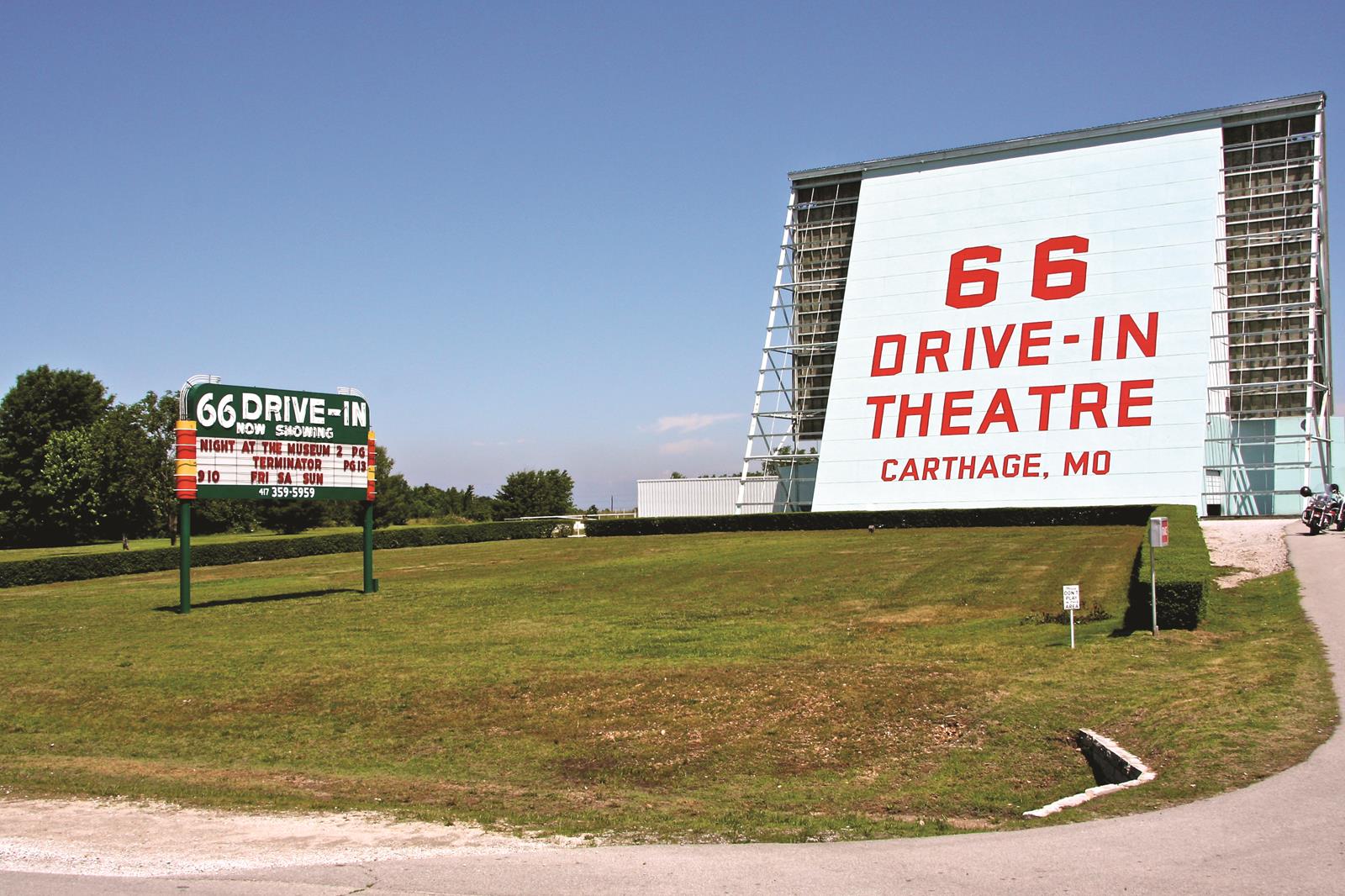 66 Drive In Theatre photo by openroads

Ash Grove This gas station doesn’t have any gas, but it has plenty of stories. Fred Watson, the original owner of the 1930s-style gas station, named the place after his wife, Gay. It became a favorite stop along the road before it burned down in 1955. Fortunately, it has been restored, thanks to Gary Turner. Visitors often stop at the service station to explore the antique road signs, vintage vehicles and old gas pumps, which stand in front of the roadside store. But the real reason to visit was for the conversation — Gary and his wife Lena would chat with travelers passing through, recommending places to stop for lunch down the road and sharing stories about the items at the old service station. Although Gary and Lena have both passed away, their daughter Barbara now runs the station as her parents did, greeting visitors with warm conversation and tales about living on old Route 66. 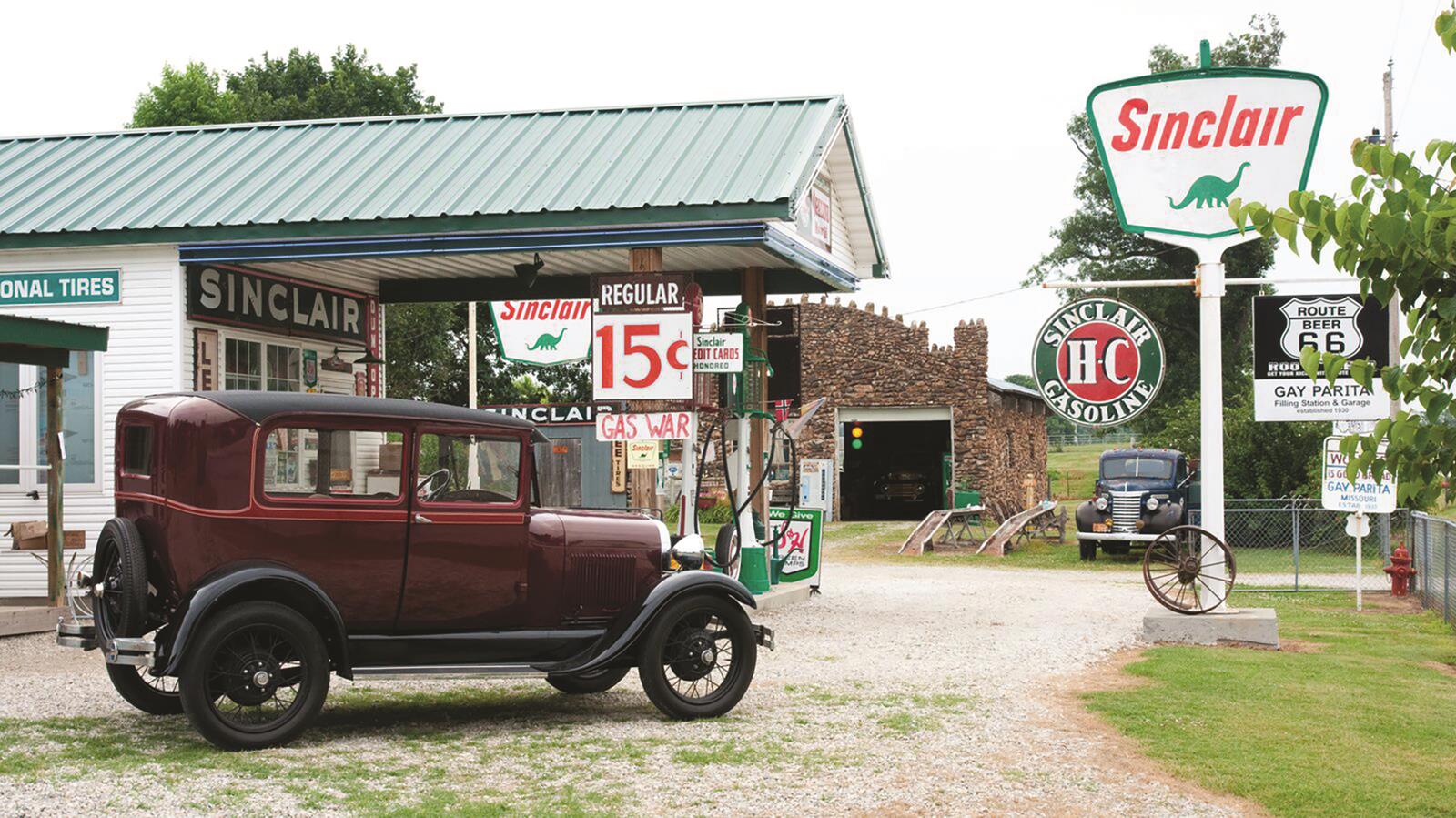 Lebanon Looking for some facts for the road? Lebanon’s Route 66 Museum opened in 2005 and has been sharing the history of the Mother Road ever since. See maps of the route, a 1950s car, a rusty guard rail and gas pumps from another time. The museum features a salt and pepper shaker collection from diners along the route and showcases items demonstrating the traditions of decades past.

Is your drive lacking funnel cakes? Looking for a tattoo shop or sports bar? Anything a driver could need can be found in Uranus, Missouri, an attraction that doesn’t skimp on hometown service. The site includes a festival food truck lot, nightclub, gun range and general store. There’s also plenty to see at the Uranus Sideshow Museum and the Escape Room. The Fudge Factory is particularly well-known for its homemade treats — the perfect sugar rush to get you back on the road. Another great stop is the Moonicorn Creamery & Funnel Cakery, which serves fabulous hand-dipped ice cream and funnel cakes.

Cuba After you treat your taste buds, treat your eyes to the sights of Cuba, Missouri, dubbed ”Mural City.” This Route 66 stop features 12 outdoor murals, each one featuring an interesting story. Stop by the mural of actress Bette Davis, who visited Cuba in 1948. Other famous visitors, including Harry S. Truman and Amelia Earhart, also have murals dedicated to them. Visitors can learn about local history through murals depicting life from decades past. From the Osage Nation meeting French settlers to a mural depicting the Civil War, moments from the region’s history have been captured with paint and displayed for passers-by to marvel at. 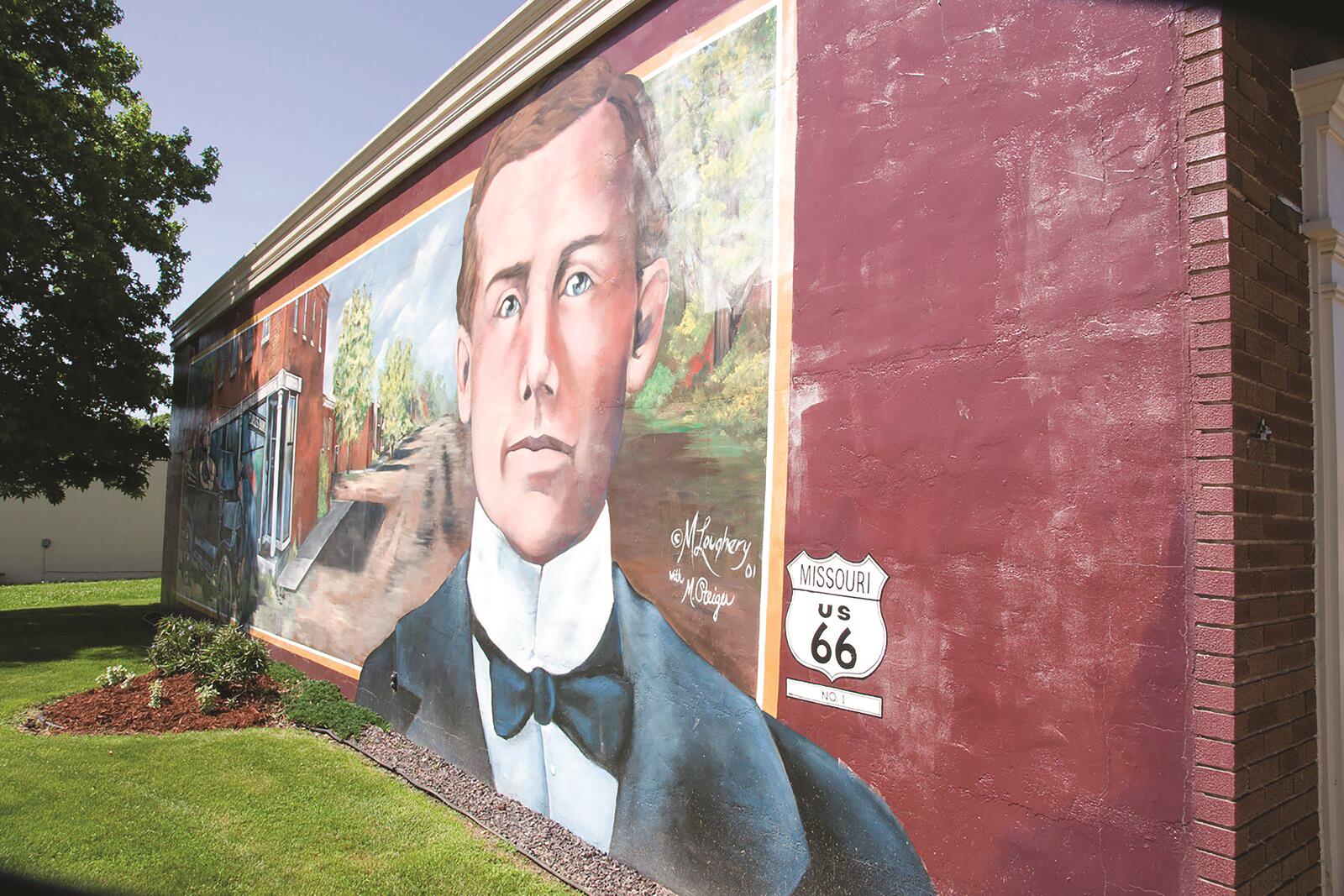 St. Louis If there’s one thing you should be sure to try on Route 66, it’s frozen custard. What is that, you ask? Well, other than delicious, this frozen specialty is made from cream, milk and eggs, making it denser and smoother than regular ice cream. It’s so thick that Ted Drewes employees turn it upside down before they hand it to you to demonstrate that it was made correctly. There are only two Ted Drewes locations and travelers flock to them, tempted by treats like the concrete, where you can choose various mixins such as chocolate chips and cone pieces. Not even winter weather stops customers from lining up at the store — yes, it’s that good. Since the shop doubles as a Christmas tree lot during the holiday season, many St. Louis natives consider it tradition to pick out the perfect tree while enjoying a frozen treat. Each October, the shop ventures to Nova Scotia where it selects and harvests the finest Christmas trees. Ted’s begins selling the trees the day after Thanksgiving through Christmas Eve. 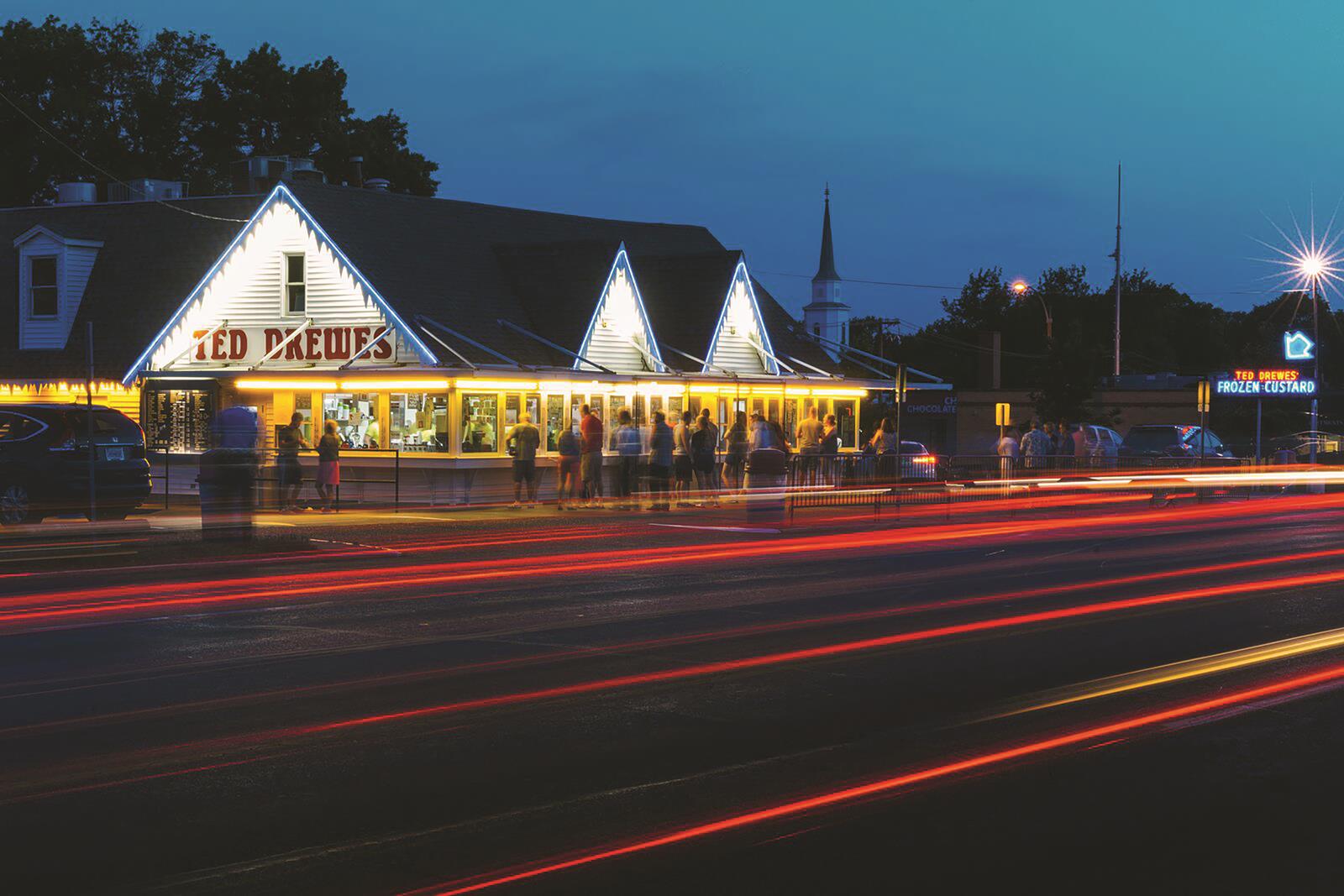 History Museum on the Square — Springfield It seems natural to end a journey where it all began. A meeting with Missouri State Highway Commission Chief Engineer A.H. Piepmeier and Cyrus Avery, chairman of the Oklahoma Department of Highways, determined that while they were satisfied with Route 60, they liked the sound of Route 66. They submitted the latter and it was approved November 11, 1926, the official birthdate of U.S. Highway 66. Located on the historic route, the recently reopened History Museum of the Square is a regional history and education destination. Six galleries with interactive and video displays are featured. None are more informative than The Birthplace of Route 66 gallery.