The landscape is dry and stony, the vegetation scruffy. In scenes right out of the Bible, Bedouins herd sheep and goats in the desolate countryside north of the Dead Sea. From the bus window, you might see a camel or two tied up by the nomads’ tents. 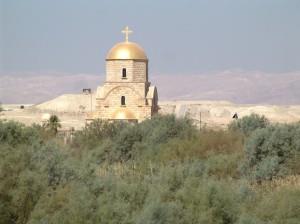 Several new churches have been built at Bethany Beyond the Jordan, the site where John baptized Jesus. (Jordan Tourism Board Photo)

Hardly lush and leafy, this area along the east bank of the Jordan River, opposite Jericho, is nonetheless ripe for discovery as one of the most significant sites in Christendom. Though Bethany Beyond the Jordan has been known for two millennia as the place where Jesus Christ was baptized by John, it was not until 1996 that stunning archaeological discoveries identified the exact site where John had been carrying out his baptisms, spurring renewed interest among religious travel groups. Before 1994, the area had been a military border zone full of land mines.
Bethany Beyond the Jordan, a place of pilgrimage from the fifth to 12th centuries, contains the remains of five memorial churches built by early believers; various Christian denominations today are putting up new churches and guest facilities near those ruins. A Jordanian national park, the protected reserve is run by an independent board of trustees—the Baptism Site Commission—appointed by King Abdullah II.