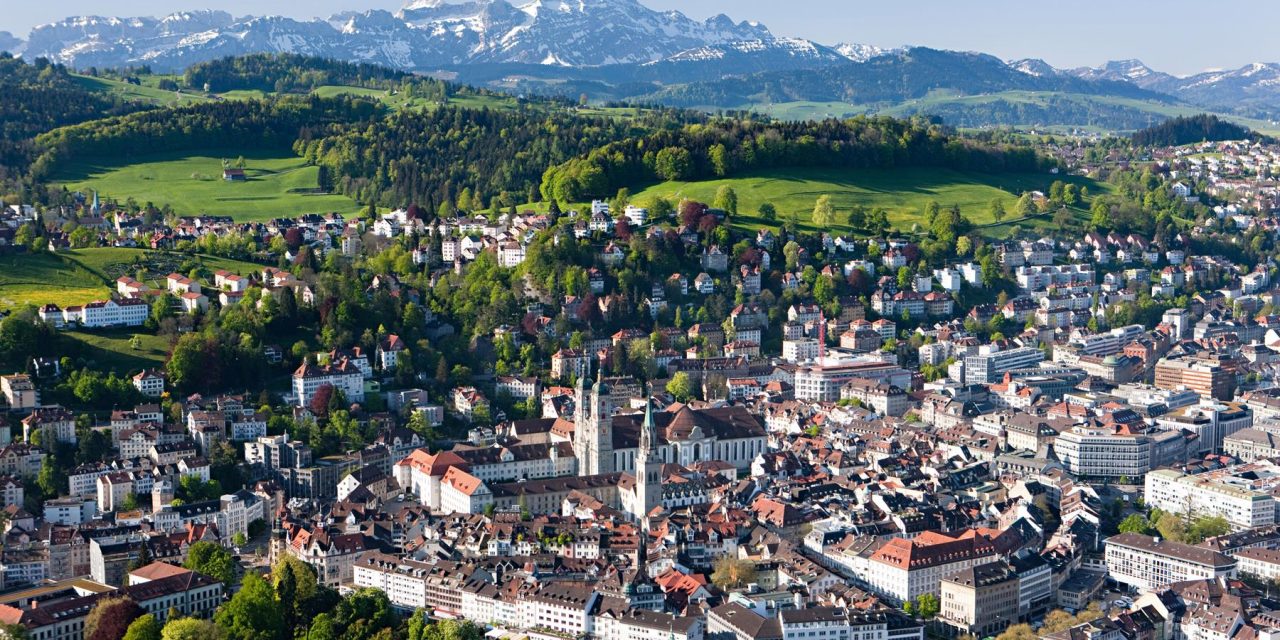 Just 15 miles from the shores of Lake Constance and set in the verdant Steinach Valley, St. Gallen, a city of 76,000 with a traffic-free Old Town, has been inspiring the faithful for centuries.

The city’s religious traditions revolve around the twin-tower St. Gallen Cathedral and the Abbey Districtwith its stunning Abbey Library. Both the library—dating to 820 and containing 170,000 books, various historical documents and 2,000 invaluable medieval manuscripts—and the entire district have been UNESCO World Heritage sites since 1983.

The Baroque cathedral’s remarkable white interior is adorned with green stucco ornamentation, rose marble altars and a gilded altar screen. Ceiling frescoes depict Biblical characters, and throngs of cherubs and saints gaze upon the scene from the clouds of heaven. Thousands annually make the pilgrimage to St. Gallen to strengthen their spiritual faith and explore the Abbey District. 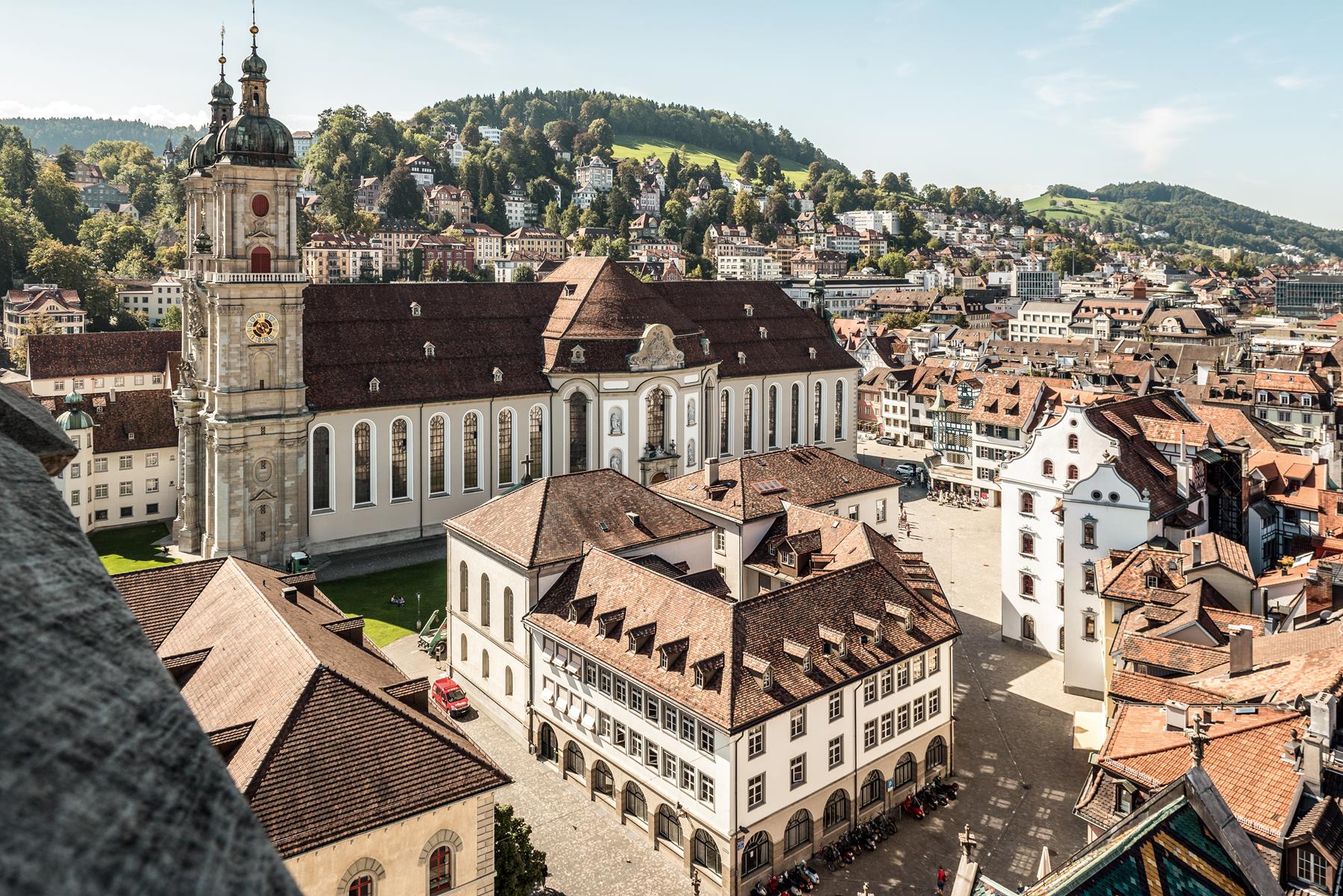 The oldest part of the cathedral (also known as the Collegiate Church of St. Gallen) is a small 9th century crypt that holds the graves of several abbots and bishops as well as Saint Othmar, the founder of the monastery. In 747 he introduced the Benedictine Rule, which set out the rules for medieval monks.

St. Gallen began as a hermitage by the Irish missionary Gallus, who established roots here around 612. During the Middle Ages the town evolved into an important center of culture and education. The Abbey of St. Gallen has existed since 719. It became an independent principality between the 9th and 13th centuries and was one of the chief Benedictine abbeys in Europe. The northern section of the abbey square consists of buildings from the 19th century and includes the ancient arsenal, Children’s and Guardian Angels’ Chapel and the former Catholic school.

The cathedral, completed in 1767, was designed by Peter Thumb, who also designed the Abbey Library. Among its rich decorations are frescoes painted by Josef Wannenmacher and the most complete set of historic church bells in Switzerland.

An original monastery plan in parchment, probably created between 819 and 826, is now on display at the new exhibition hall in the Abbey District. The parchment is the earliest known representation of a monastery district from the Middle Ages.

The city of St. Gallen itself, once a textile manufacturing town, is the economic and cultural capital of eastern Switzerland, and today hosts opera, hip-hop performances, art exhibitions, contemporary dance theater and poetry competitions. Its cozy restaurants, art museums, spacious green parks, busy shopping districts and intriguing alleys all attest to a lively, bustling city that is friendly and laid-back.

Other attractions in St. Gallen include the Natural History Museum, Textile Museum, St. Laurenzen Protestant Church (built for the citizens of St. Gallen’s Old Town) and Roter Platz (Red Square), where benches, fountains, sculptures and a car are coated in red. The Drei Weieren consists of three pools that supplied the textile mills and previously were used by monks to cool off.

St. Gallen is also known as the City of 700 Stars, a spectacle that celebrates its 10th anniversary in 2019. These specially-made lighted stars will again illuminate the city’s streets and squares during Advent. 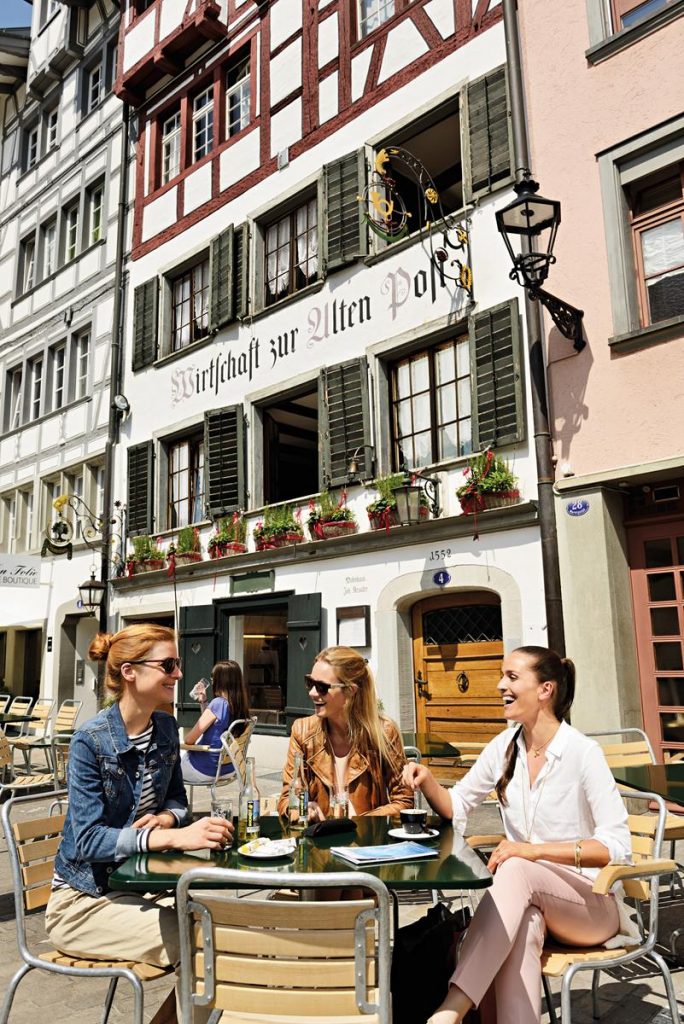 As many as 111 elaborate oriels—small projecting bay windows—have been preserved and adorn house facades in the Old Town pedestrian area. These carved, beautifully decorated architectural features tell the history of the town’s successful textile merchants. Most of the artistically cut oriels are to be found on four streets – Spisergasse, Marktgasse, Kugelgasse and Schmiedgasse.

St. Gallen experienced an oriel construction boom between 1650 and 1720. Some of the oriels have names such as Camel Oriel, Pelican Oriel and Swan Oriel. The oriels, which are typically seen on the second and third floors, are said to have been symbols of wealth. Residents often had these windows decorated with carvings of things they had seen on exotic journeys throughout the world. As in many Swiss cities, St. Gallen’s Old Town is a historic core that invites you to get immersed in its atmospheric, cobbled streets.

Tempting cafes, bars and restaurants are housed in the colorful facades. Join a guided tour of the Old Town or just wander through the narrow, winding streets with boutiques, art galleries and bakeries. Restaurants feature a variety of cuisine, from Swiss, Spanish and American to Vietnamese and Thai. You can dine outdoors in good weather.

While in St. Gallen, sample the famous white veal sausage, a clear favorite at barbecues, fetes and festivals in the region. In 2007 it was awarded special recognition status, of which the city’s butchers are proud. St. Gallen residents prefer their favorite sausage served crisp and brown from the grill, accompanied by a crunchy bread roll.