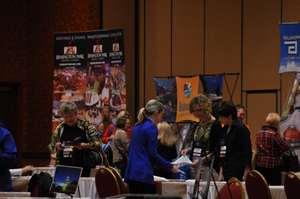 The late March conference, hosted by the A-team from Arkansas Parks and Tourism, took place in Northwest Arkansas, specifically Rogers and Bentonville. At the kick-off event attendees were treated to a private reception and dinner at Bentonville’s magnificent new Crystal Bridges Museum of American Art, the most significant art museum that’s opened in a generation. The museum’s permanent collection spans five centuries of American masterworks ranging from the Colonial era to the current day. And because of generous support of hometown resident Walmart, admission to the architecturally stunning museum is free.

View the Digital Flipbook Edition Below