When it comes to creating Christmas memories, few towns do it better than Grapevine, Texas. Its old-fashioned Main Street alone is a big enough reason to include Grapevine in a November or December tour itinerary, but the town offers more than 1,400 holiday events at numerous venues during a period that spans 40-plus days.

The Dallas-Fort Worth suburb started calling itself the “Christmas Capital of Texas” in 2007; the Texas State Senate made the designation official in 2009. 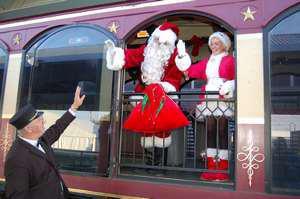 For many years, downtown Grapevine has had a Christmas parade, tractor-drawn wagon rides, costumed characters and a Santa on stilts, but the celebration has expanded, attracting merrymakers from miles around. These days more than a million lights festoon historic Main Street, an attractive shopping destination filled with specialty shops gussied up in ribbons, bows and wreaths.

A leisurely stroll evokes memories of a simpler time, before malls and big-box stores. Lighted wreaths adorn the old-time street lamps and the strains of “White Christmas” and “Silver Bells” ring out in the frosty air. The Light Show Spectacular, a computerized light display at the Town Square Gazebo, features a “singing” Christmas tree, and animated scenes in Liberty Park include beavers sawing and chopping logs, elves feeding Santa’s reindeer and Victorian carolers singing “Joy to the World.”

The historic Palace Theatre on Main Street presents Christmas stage shows in December, plus classic movies like It’s a Wonderful Life, White Christmas and A Christmas Story. The Texas Tenors, a trio that performs in Branson, entertained holiday crowds this past December in concerts that included Christmas carols as well as a tribute to Luciano Pavarotti and standards like “My Way” and “Proud to be an American.” Video clips of appearances on TV’s “America’s Got Talent” chronicled the group’s fast rise to fame. Grapevine hopes to get the group back this December.

The Grapevine Vintage Railroad, at the other end of Main Street, is transformed into the North Pole Express as Santa’s elves entertain during a ride in the 1920s- and 1930s-era passenger coaches. There’s even a visit from Santa. The festivities start with a brief, pre-boarding Christmas stage show at the Grapevine Cotton Belt Depot. Children are encouraged to wear their pajamas. 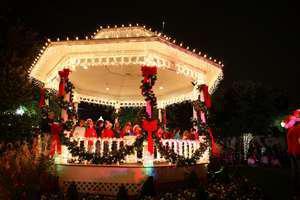 Another focal point of yuletide fun in Grapevine is the massive Gaylord Texan Resort, whose annual “ICE!” attraction showcases a world of dazzling ice sculptures (tinted with food coloring) inside a refrigerated tent set at 9°. Parkas are provided. The theme in 2011 was “Shrek the Halls,” with DreamWorks’ Shrek characters carved from 34-pound blocks of ice by artisans from Harbin, China, known for its annual winter festival featuring an elaborate ice village. The theme two years ago was “A Charlie Brown Christmas.”

Aside from the extra-cost attractions, visitors to the Gaylord can simply wander through the hotel’s three atriums, taking pictures of all the Lone Star Christmas displays, including giant snowmen, candy canes and nutcrackers. Other highlights in this winter wonderland: a 52-foot rotating Christmas tree and a life-sized gingerbread house, not to mention more than a million lights and 12,000 ornaments.

Grapevine’s mega-water park resort, Great Wolf Lodge, goes all out for Christmas, transforming itself into Snowland for three weeks in December, with daily snow in the lobby, visits from Santa, a life-size gingerbread house, toy creation station and Great Clock Tower holiday snow show, among other festivities.

Down the highway from these mega-resorts, holiday shoppers flock to Texas-size shopping destinations—Grapevine Mills, one of the Southwest’s largest malls—and a huge Bass Pro Shops Outdoor World.