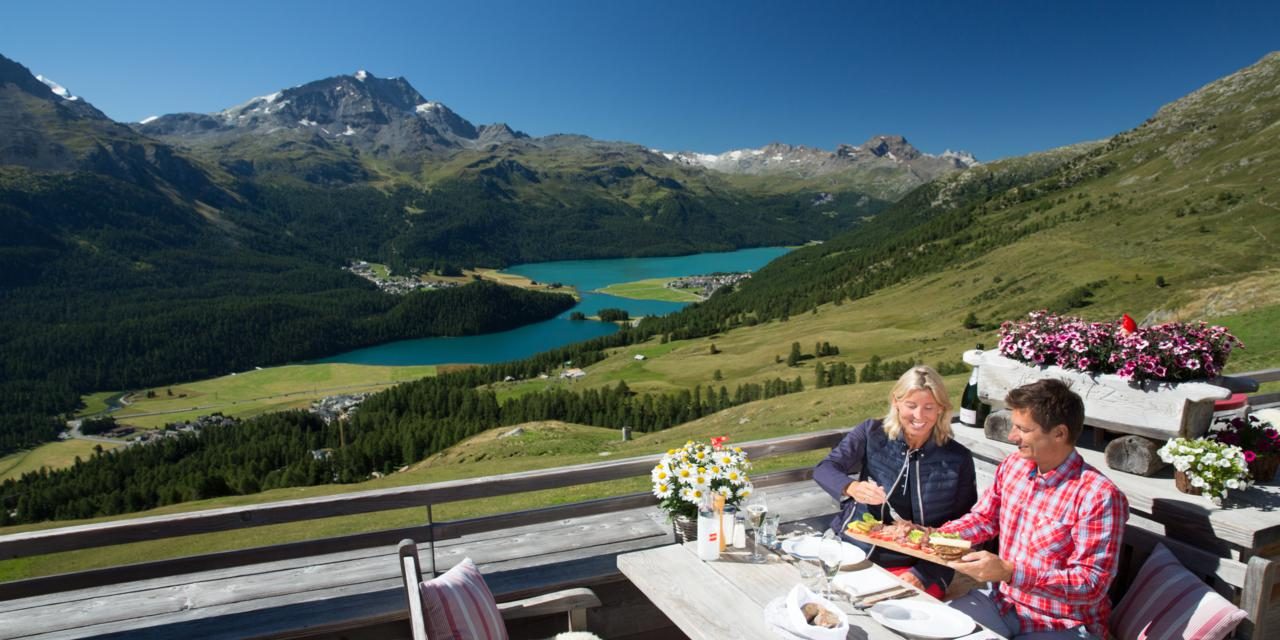 No mountain scenery in the world compares to the grandeur of the Swiss Alps, and the Grand Train Tour of Switzerland is the best way to soak it all in.

Switzerland Tourism has developed suggested itineraries that combine some of the country’s most beautiful rail routes into one carefree trip. The country’s public transport system is one of the most advanced on the planet. Noted for their comfort, efficiency, frequency and reliability, Swiss trains run like clock-work and serve all four language regions (German, French, Italian, Romansch), connecting cosmopolitan cities, small towns and world-famous resorts. Landscapes range from snow-capped peaks to palm-lined lakeshores.

One ticket, the Swiss Travel Pass, is all you need to ride the trains, and it’s valid on buses, boats and urban transit systems as well. Pass holders also receive free entrance to more than 500 museums in Switzerland and are entitled to 50 percent discounts on most mountain cable cars and cogwheel trains.

The Grand Train Tour, covering eight different routes, can start at any point, and there is no prescribed travel direction.

Here is one suggested four-day itinerary:

Start in Lucerne, a picturesque city situated in the heart of Switzerland. Enjoy Lucerne’s churches and museums, take a steamer on Lake Lucerne and see the 14th century Chapel Bridge, the country’s most photographed monument. Take the GoldenPass Line in German-speaking Lucerne en route to the French flair of Lake Geneva, traveling on a trio of top trains. The first change is made in beautiful Interlaken, one of the most visited places in Switzerland. Set between Thun and Brienz lakes, the small town rests below the famous trio of mountains—the Eiger, Mönch and Jungfrau. A short trip from Interlaken to Zweissimmen is followed by a change to the GoldenPass Panoramic of the Montreux Bernese Oberland Railway, which travels to Gstaad and finally Montreux, the most frequented resort on Lake Geneva. 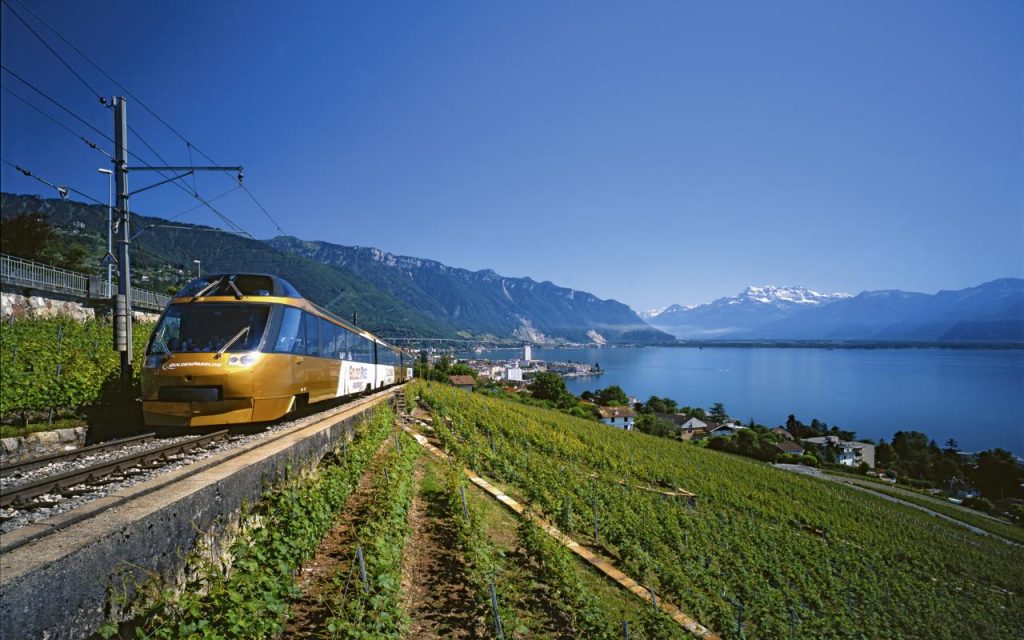 From Montreux, head to Zermatt, a classic ski village and mountaineering center with pretty chalets and views of the iconic Matterhorn (14,691 feet), Switzerland’s most majestic peak. Activities in the area include cable car rides to mountain summits like Klein Matterhorn. Attracting visitors of all nationalities, Zermatt is traffic-free, except for small electric vehicles and horse-drawn carriages and sleighs.

An all-day ride on the world-famous Glacier Express ends in late afternoon in St. Moritz, a chic ski resort in the high, sun-blessed valley of the Engadin in eastern Switzerland. With 300-plus days of sun a year, more than anywhere else in the coun-try, it’s not surprising the symbol of this winter sports capital is a sun. 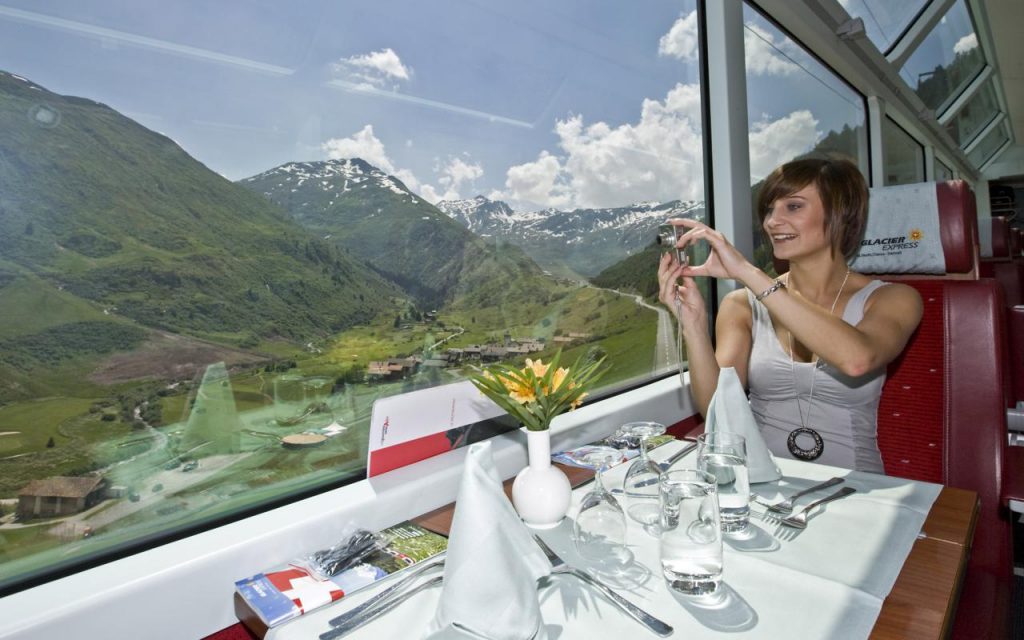 The “slowest express train in the world,” acclaimed for its engineering excellence and jaw-dropping panoramas visible from roof-high windows, travels through 91 tunnels and crosses 291 bridges on the eight-hour journey. Vistas from the Glacier Express include the confluence of the upper and lower Rhine rivers, and the Domleschg Valley with its 13th century Schloss Ortenstein and other castles. Other scenic highlights: the glorious Goms region, Disentis with its beautiful Benedictine monastery, the 1,312-foot-deep Rhine Gorge, the 6,670-foot-high Oberalp Pass, and, of course, the mighty Matterhorn—all in a spectacular setting of rugged rock faces, crystal-clear mountain lakes and unspoiled villages. 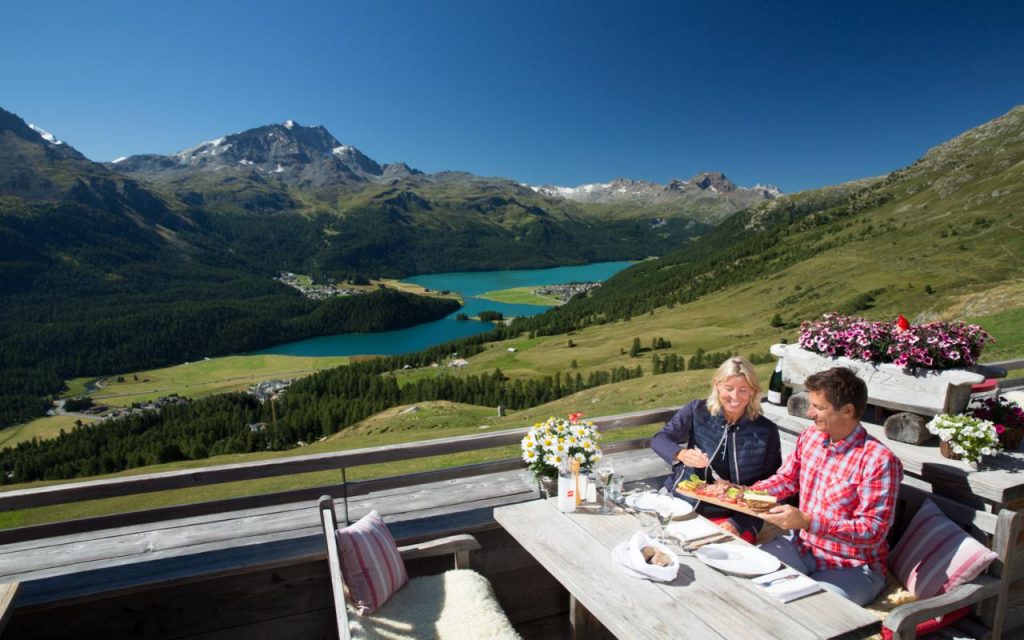 Board the narrow-gauge Bernina Express at the St. Moritz station for the most spectacular of all Alpine crossings. This legendary train seamlessly connects the cool north with Mediterranean climes along the Italian border. Near Filisur the train crosses the 213-foot-high Landwasser Viaduct, which dates back more than 100 years. The journey continues through 55 tunnels and 196 bridges, easily overcoming the 7 percent gradient. When the first glaciers glisten in the distance, passengers pop out of their seats in awe. The route continues through the Val Poschiavo, crossing into Italy’s Valtellina wine region. At Tirano you change to the Bernina Express Bus, which passes palm-lined Lake Como and arrives in late afternoon in Lugano, southern Switzerland’s largest town. 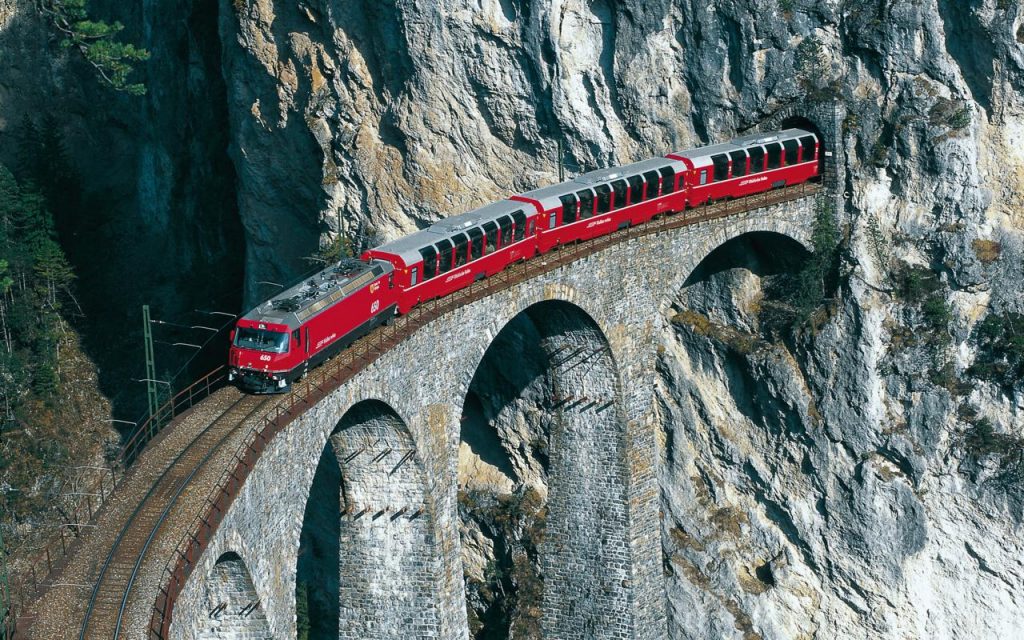 You may want to stay over in Italian-speaking Lugano and sample the Italian-influenced cuisine of the Ticino region. Besides museums, churches and lakefront beaches, Lugano delights visitors with an old town full of broad squares, gardens, Italianate architecture, and maze of steep alleys and stairways.

If you have to save Lugano sightseeing for another time, it’s back on the train bound for Lucerne, the starting point of your four-day Grand Train Tour. Switzerland Tourism also offers three other suggested four-day itineraries, plus an eight-day route from Zurich and back. For details on the Grand Train Tour of Switzerland, visit myswitzerland.com/en-ca/sts-grand-train-tour-of-switzerland.html.