Getting Some Kicks on Route 66 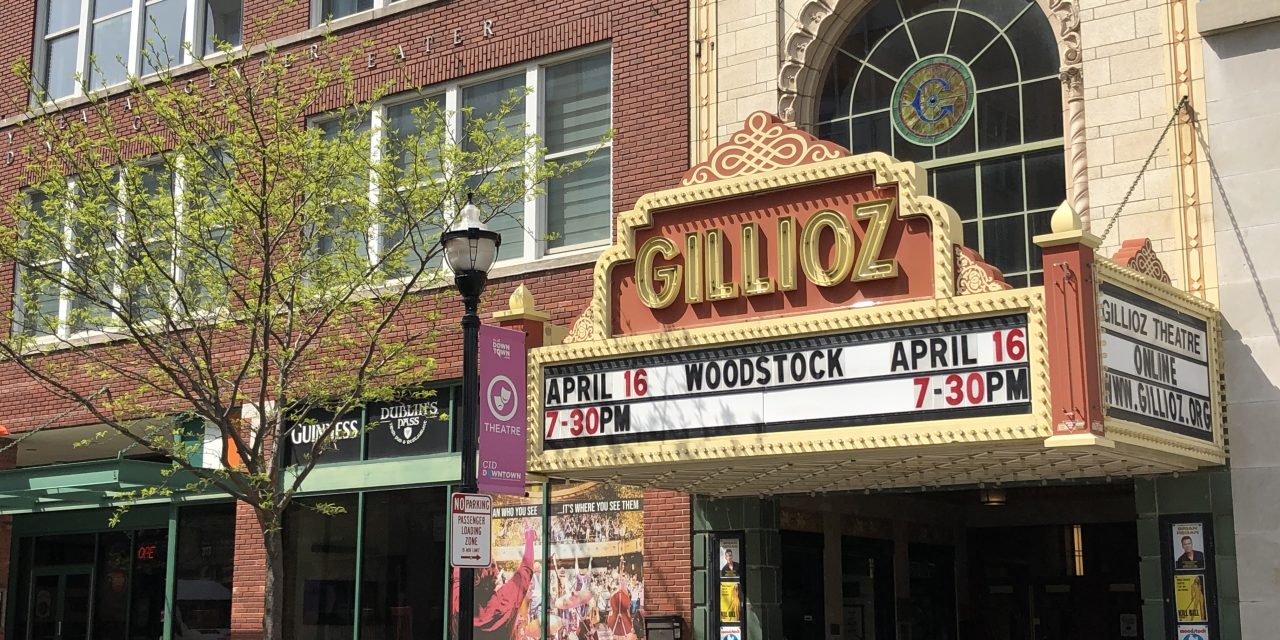 Being a fan of Route 66 lore, I try to visit sections of the old Mother Road every chance I get. I’ve always dreamed about a long road trip that would follow its entire 2,400-mile path from Chicago to Santa Monica, California, but for now I settle for segments in the Midwest.

I recently went to Springfield, Missouri looking for vestiges of the first completely paved national numbered highway and wasn’t disappointed. In fact, I was in Route 66 heaven. (The family room in my house, I should mention, is plastered with artwork and furnishings that recall good old double-6 and the golden age of automobile travel.)

A Fabled Road That Led to Romance and Adventure

Missouri’s third-largest city is considered the birthplace of Route 66. It was from a hotel there in 1926 that Missouri and Oklahoma highway executives sent federal officials a telegram proposing the new road be called U.S. Highway 66, a designation the Secretary of Agriculture approved a few months later. John T. Woodruff, a Springfield attorney and businessman who promoted roads in the Ozarks and elsewhere, was elected as the first president of the National Route 66 Association in 1927.

Starting in the late 1950s, Route 66 was gradually replaced by high-speed interstates. While the pioneering pathway’s official decommissioning in 1985 marked the end of an era, the legacy of the fabled east-west artery lives on. I-44 may have replaced Route 66 in Missouri, but hundreds of “Historic Byway” signs recognizing the original route can be found in Springfield and across the state.

Though the last Route 66 sign in Missouri was removed in 1977, visitors to Springfield find many ways to commune with the spirit of so-called Main Street USA, a road that brought growth and prosperity to small businesses serving travelers in Springfield and other towns along its path. Most reminders of Route 66’s glory days are clustered in the downtown area, mainly along College and East St. Louis streets, which have black-and-white “Missouri Route 66” shields painted on the pavement.

On Park Central Square, downtown’s hub, the History Museum on the Square is the ideal place for Route 66 fans to get their kicks. A 66-foot-long timeline and map of the highway traces its history, showing classic diners, motels, natural wonders and kitschy roadside attention-getters in the eight states it traveled through.

Artifacts from Springfield include a Standard Red Crown gas pump, a Sunset Drive-In movie theater sign, an A&W Root Beer curbside ordering box, a jukebox, and a sign and menu from Red’s Giant Hamburg, probably America’s first restaurant with a drive-up window when it opened in 1947. (The name originally was meant to be “Red’s Giant Hamburger,” but the “er” was cut off at the bottom when Red Chaney realized the sign was too tall to fit under overhead power lines). Museum visitors also will see vintage postcards, a Steak & Shake booth and a turquoise Chevrolet convertible from the 1950s.

Other galleries in the museum, which opened in 2019 to nationwide acclaim, showcase various aspects of Springfield and Ozarks history, including transportation, industry, pioneer settlement, Native American cultures and the Civil War. One exhibit spotlights what is said to be America’s first quick-draw shoot-out, an incident on Springfield’s town square in which Wild Bill Hickok shot a man through the heart. The 1865 gunfight made national news.

Car culture naturally is a big part of Route 66, and the Route 66 Car Museum, on West College Street one mile west of the Square, captures the vibe with antique gas pumps, oil cans, signs and other automotive memorabilia, not to mention aisles of restored vehicles buffed to a shine. Treasures on display include a black 1957 Corvette, a red 1956 Ford Thunderbird and a 1929 Ford Model A. The 1971 Gotham Roadster is an identical re-creation of a car seen on the old Batman TV show. One of my favorites was a 1939 Packard Safari Wagon used in Africa by Winston Churchill. Made specifically for big game hunts, the butter-colored, wood-sided beauty is one of only three produced and the only one known to still exist. The museum gift shop sells all kinds of Route 66 souvenirs and has a selection of old license plates from Missouri and other states. 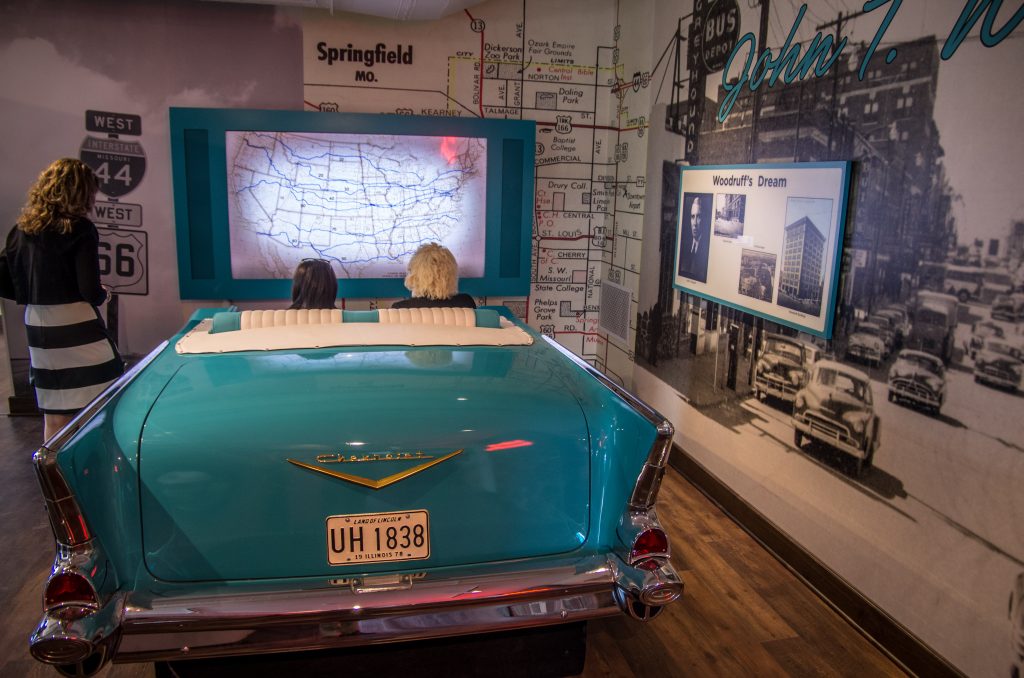 Visitors to the History Museum on the Square can watch a Route 66 video from a 1957 Chevrolet. (Springfield, Missouri, Convention & Visitors Bureau Photo)

The historic College Street Cafe, an unassuming little breakfast and lunch diner in a cement-block building accented with a red awning and checkerboard facade, shares a parking lot with the Route 66 Car Museum and seemed like a logical lunch place for a Route 66 aficionado like me. Offering classic, home-cooked fare, the menu tempted me with the meatloaf sandwich, open-faced meatloaf with mashed potatoes, pork tenderloin sandwich with fries and chili cheeseburger. The T-Bird burger, topped with egg, bacon and cheese, sounded good, too. But I chose the country-fried steak in white gravy with two sides (mashed potatoes and fried okra) and a biscuit with jelly. A slice of chocolate cream completed the comfort-food feast.

Among other Route 66 landmarks on College Street is Rockwood Motor Court, built in 1929 as a tourist camp with a Shell gas station and family residence. A modern motel today, it underwent renovations in 2019. Each room is Route 66-themed. All six cabins, as well as the filling station, cafe building and remaining single-car garage, are original to the property.  The gable-roofed cabins, framed in native oak lumber, are constructed of Ozark sandstone and trimmed with red brick.

Route 66 Roadside Park, also on West College, sports a full-size replica of the sign (with explanatory text) that stood in front of Red’s Giant Hamburg until it closed in 1984. The new Red’s opened in 2019 away from Route 66 but serves the same old-fashioned burgers, fries, pinto beans, ice cream and other items from the menu of long ago. You’ll see a sign like the original and a busy drive-through window.

Closer to downtown, Bud’s Tire & Wheel, in business on Route 66 since 1958, has a great nostalgic mural that’s worth a photo stop. 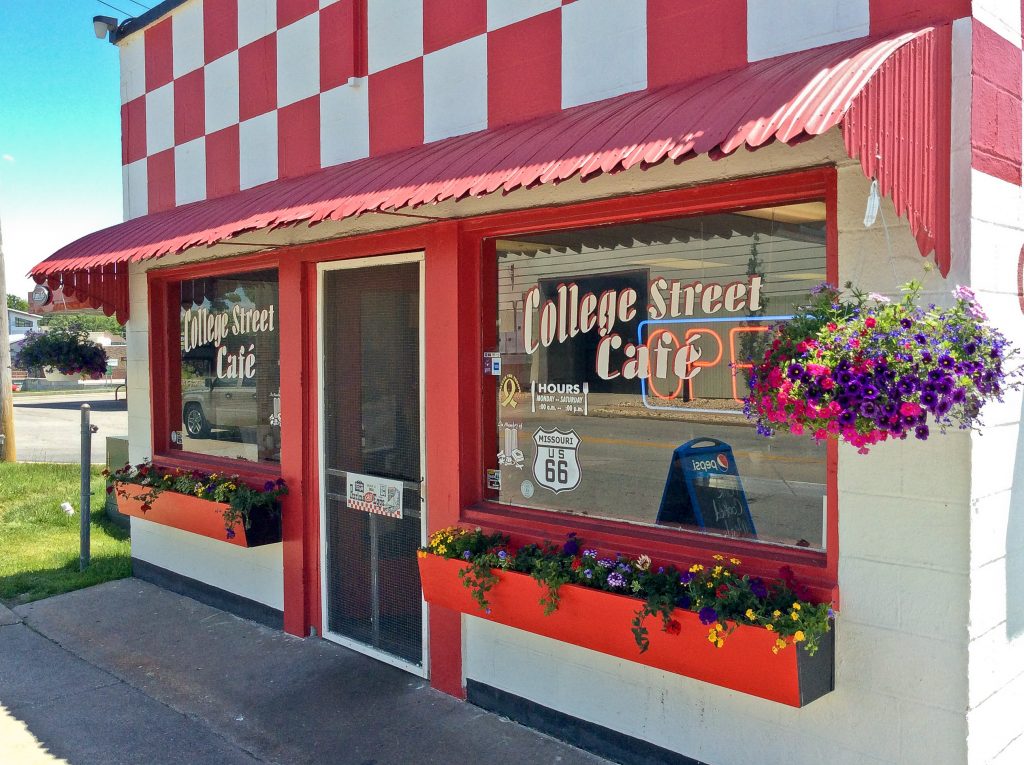 Exploring the Heart of Downtown and East St. Louis Street

The block east of the Square contains the Gillioz Theatre, an opulent movie/vaudeville house that debuted on Route 66 in 1926. Elvis Presley saw a movie there in 1956 before performing in concert down the street at the Shrine Mosque. After closing its doors in 1980, the grand old theater sat unused until its massive restoration was completed in 2006. The Spanish Colonial Revival gem now is a venue for music acts, comedians, plays and movies.

Continuing east onto East St. Louis Street brings you to Abou Ben Adhem Shrine Mosque, built by the Shriners fraternal organization in 1923. Its auditorium, once the largest west of the Mississippi River, hosts community events and concerts. Tours of the arabesque-style brick building, with its bulbous domes and terra-cotta polychrome turrets, can be arranged for groups. A block away, another Route 66 landmark, the stately 1926 Kentwood Arms Hotel, is now housing for Missouri State University students and named Kentwood Hall.

Walking along East St. Louis, I dropped into the Route 66 Springfield Visitors Center, where I picked up tourist brochures, got some friendly advice and took in the history exhibits.

The Steak ’n Shake restaurant on East St. Louis has served its Steakburgers, fries, chili and milkshakes to hungry travelers since 1962. Sporting the original signage, it is one of three Steak ’n Shakes still located on old Route 66, offering both car-side service and a dining room with black-and-white tile floor, red vinyl seats, neon signs, old photos and other retro decor. (Had I known about this location earlier, I wouldn’t have eaten at a more modern, less atmospheric Steak ’n Shake the night before.) 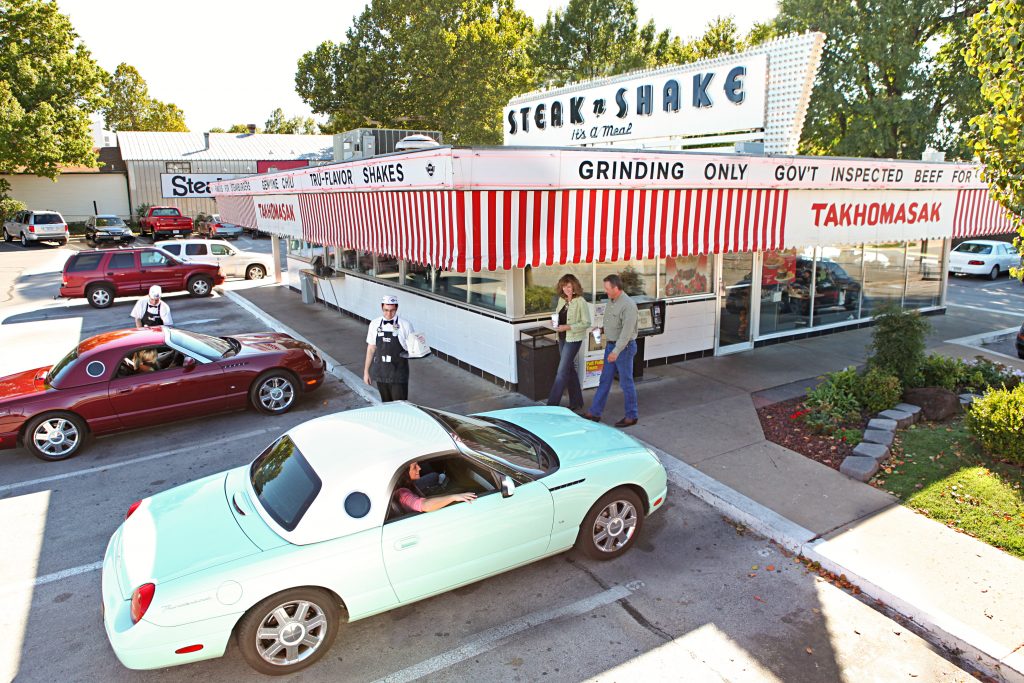 Steak ‘n Shake, a Route 66 landmark on East St. Louis Street in Springfield, has been serving its Steakburgers since 1962. Guests can dine indoors or use car-side service. (Springfield, Missouri, Convention & Visitors Bureau Photo)

The new Route 66 Food Truck Park is another fun place to grab a quick meal on East St. Louis. Vendors dish up everything from tacos and slow-smoked barbecue to Thai specialties and Jamaican jerk chicken. Guests can sit at picnic tables or dine indoors. The park’s giant fiberglass statue of a chef holding two spatulas is a throwback to the “Muffler Man Giants” once found at businesses along Route 66.

At the corner of East St. Louis and Glenstone Avenue is the Best Western Route 66 Rail Haven, which opened in 1938 as the Rail Haven Motel. Elvis stayed there in 1956, and guests can request the Elvis Suite. Marilyn Monroe and Wild Bill Hickok themed suites are available as well. 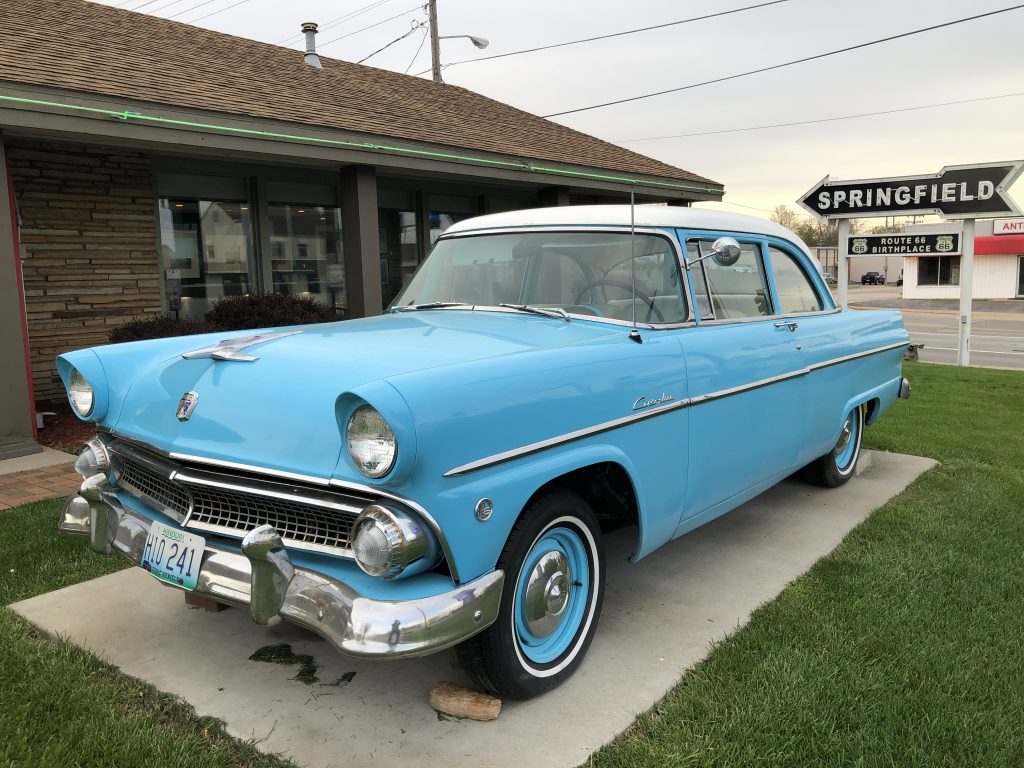 Speaking of old-time lodgings, I got off I-44 in Lebanon before arriving in Springfield so that I could see the Munger Moss Motel, whose beautifully restored neon sign is pictured in many Route 66 books. I bought a few trinkets in the lobby shop and chatted with owner Ramona Lehman. She and her husband Bob, who died in 2019, bought the motel in 1971. It has been serving travelers for 75 years.

Down the road from the Munger Moss is Wrinks Market, a general store that was operated by Glenn Wrinkle from 1950 until his death in 2005. It’s now run by his granddaughter under the name The Vintage Cowgirl but still features Route 66 souvenirs and the store’s popular fried bologna and other deli sandwiches.

A free-admission Route 66 museum inside the Lebanon-Laclede County Library has re-creations of a ’50s diner and gas station, along with antique cars, historical photos and other memorabilia.