The fish are waking up from a long winter and are hungry. The American Sportfishing Association estimated that there were 60 million anglers in the U.S. in 2011 and that number has likely increased since with fishermen and women who, like you, are heading to the nearest body of water to catch some bass. 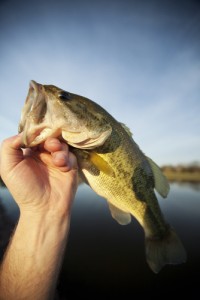 Located in the northern section of Alabama, this lake spans more than 69,000 acres and is 75 miles long. Bassmaster named Guntersville the number 3 spot on its list of the 100 best bass fishing lakes in the U.S. Public boat ramps and small marinas are found all around the lake with the heaviest concentrations around the Nickajack Dam and Guntersville Dam.

Guntersville State Park is next to the lake. Bald eagles are frequently seen through the winter with some staying year round. Watch where the eagles soar over the lake because they are just as interested in fish as you are. Large and smallmouth bass are abundant in this lake. Check with local officials on length limits on the black bass, a regulation established to allow this fish population to increase in the lake.

Grand Lake is located in northeast Oklahoma in the Ozark Mountain foothills. It was formed when the Pensacola Dam was built on the Grand River. The lake takes up more than 46,000 acres with 1,300 miles of shoreline.

Home of frequent fishing tournaments, Grand Lake sports largemouth, white, spotted and the hybrid striper bass strains. Fly into the South Grand Airport and rent a boat from one of the many marinas in Afton or Monkey Island. Largemouth bass are biting year round but the smallmouth favor January through October as they rest in the winter months.

The Potomac flows through four states (Pennsylvania, West Virginia, Virginia, Maryland) for more than 400 miles and empties into the Chesapeake Bay. The best time for bass fishing is July through December. Fishing from the shore in the shallow areas is common early in the season. The bass move to deeper waters in the winter months so you’ll need your boat.

With huge populations of largemouth and striped bass, the Potomac is a favorite of anglers in the East not only because of the fish but because of its proximity to several top-rated hotels and night clubs. While the best fishing is in the main body of the river, many small streams run into the Potomac where you can find good fishing when the river is crowded with other people.

As with other states, Maryland requires a boating permit to traverse the waterways. Luckily there are online sources that can help you through the test and get your permit. This will make your days on the Potomac safer and more enjoyable.

Located just outside of Minneapolis–Saint Paul, Minnetonka is 14,500 acres with 125 miles of shoreline. The cool Minnesota waters breed a large population of largemouth bass, which draws many fishing tournaments each year. Of 11,000 lakes, Lake Minnetonka is reported to be the best for bass fishing in Minnesota.

In 2011 the Department of Natural Resources (DNR) reported large populations of 14 to 18 inch long large mouth bass. In the 10 tournaments held in 2012, 869 contestants caught 1,989 largemouth bass with the largest weighing 6.25 pounds. This lake has plenty of bass to go around so you’ll not leave with an empty creel.