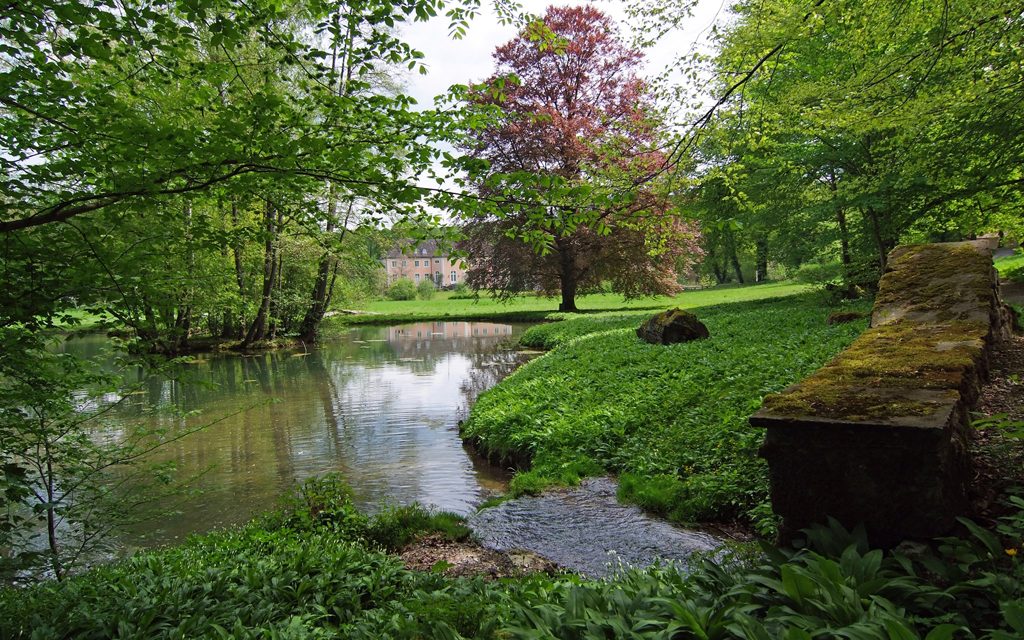 They say you’ve never really truly gotten to know a country unless you’ve gotten out of your car, walked through a forest, eaten the local foods, talked to people on the street and visited the natural attractions.

Many group tours to Germany are planned around an “in-and out approach” where only the most-visited, recognizable towns, monuments and points of interest are highlighted. But Germany is more captivating than you might think and offers a range of tours that might be described with words such as eco-friendly, nature-oriented, sustainable and low impact tourism.

One such area of Germany where this concept abounds is the Teutoburg Forest, a range of low, forested hills in Lower Saxony and North Rhine-Westphalia, part of the German North Uplands. Most of the ridges and valleys here are covered by deciduous forests, and agriculture is a large part of the landscape. 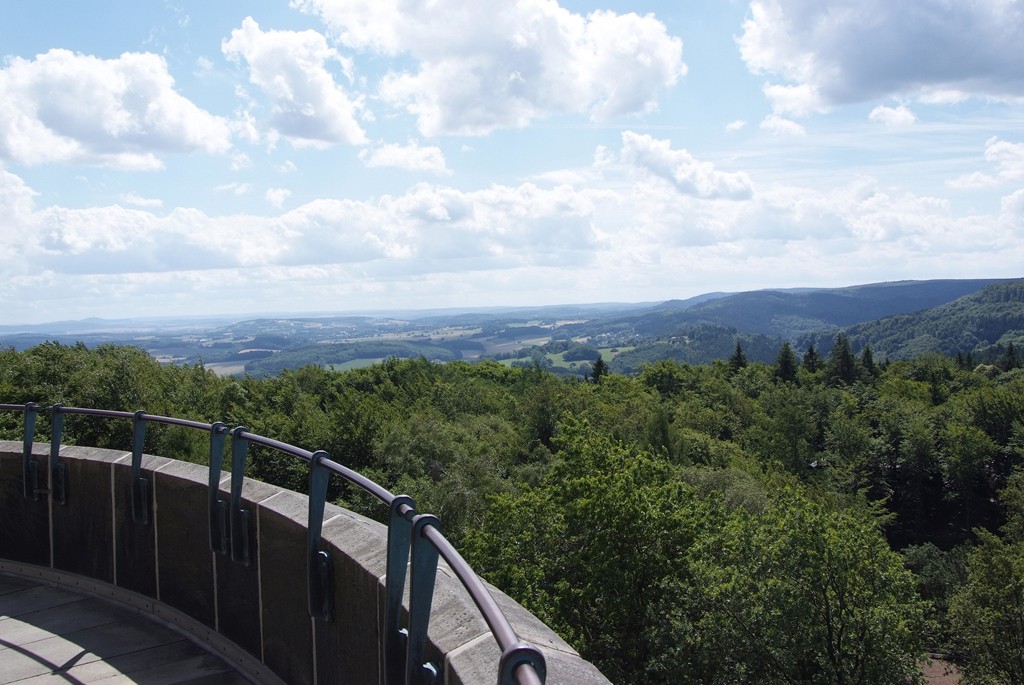 The verdant wooded hills here are called Germany’s “healing garden” and refer to not only the trees that provide oxygen, but also the many spas here and the mild climate. Exercise, wellness, fitness, medical centers and beauty facilities combine with the local hospitality of the people to ensure a relaxed experience.

Driving through the area by tour bus or van, your group will instantly recognize the less touristy, wooded areas as a “green belt” worth exploring where nature, cities and attractions make for a special blend of discovery, and where groups feel they can get to know the country better.

In Germany, areas of exceptional natural and cultural importance are given special protection in the form of 15 national parks, 16 biosphere reserves and 104 nature parks, as well as 39 UNESCO World Heritage sites, with sustainability a key factor in encouraging people to visit the country.

Germany tourism officials list respectful management of cultural heritage, extensive conservation of plants and animals, and a passion for upholding regional customs as goals that will ensure these national treasures will be preserved for generations to come.

In many vacation areas of Germany, guests now are presented with innovative ways to experience nature and first-class options for health and wellness. And today, every business is conscious of accessibility for the disabled.

A tour of the 580-square-mile Biological Station at Kreis Paderborn/Senne reveals an astonishing number of conservation initiatives that are preserving nature. From pasturing sheep on land to preserve the natural countryside, to gradual reforesting of oak trees that have died out over the years and restoration of wetlands, to special habitats for birds and bats, to making apple brandy from local orchards, the region is thriving as this non-profit association strives to make the land more productive and eco-friendly.

The station also conducts nature hikes, excursions and lectures on a wide range of topics. Courses in 2015 will be held on beekeeping, fruit tree pruning, harvesting and processing of honey, and bird watching. Groups are welcome to view the work of researchers. 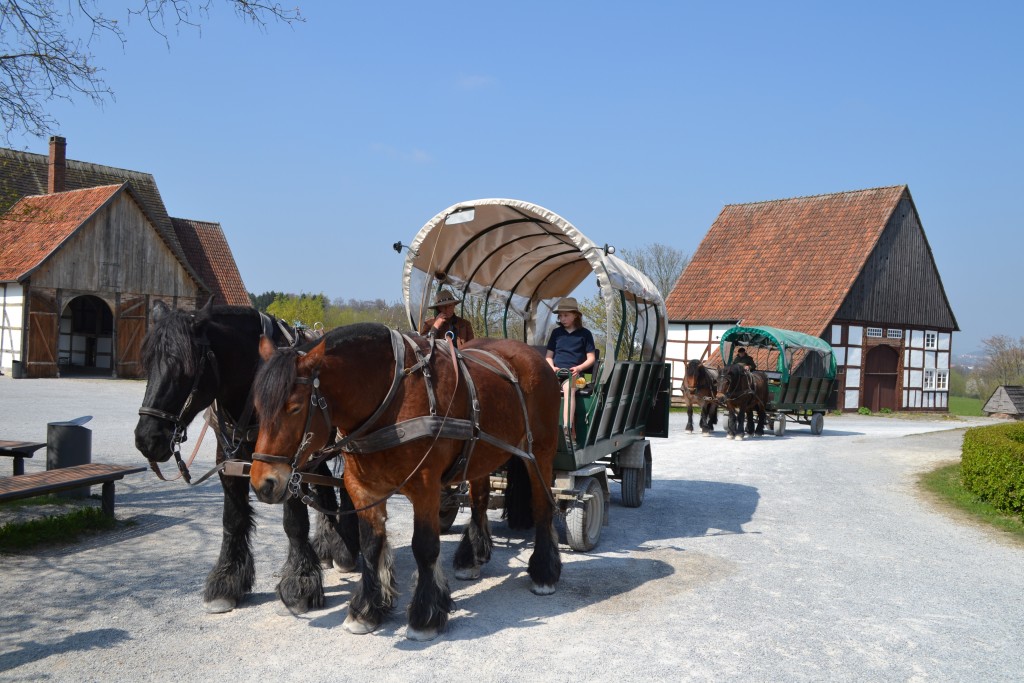 At the Westphalian Open-Air Museum in Detmold, 90 buildings celebrate German lifestyles of the past.

Another tour highlight in the region is Detmold, called the “City of Culture,” with about 600 historic half-timbered and plastered buildings, a large town square, a Renaissance Residence Castle and a Martin Luther church. Near Detmold, at the well-manicured, 250-acre Westphalian Open-Air Museum, the largest open-air museum in Europe, groups can visit as many as 90 completely furnished buildings from years gone by, including a bakery, photography studio, blacksmith, firehouse and more, with numerous craftsman displaying their skills. Horses and covered wagons supply the means of transportation from the parking area. The museum celebrates the past and the more natural ways that people lived 100 years ago. One of the museum’s buildings is a small procession chapel built around 1775 by a local farmer.

Delving into the region’s religious and cultural history, groups are welcome at the former Benedictine abbey of Corvey, a Baroque palace and a UNESCO World Heritage site since 2014. 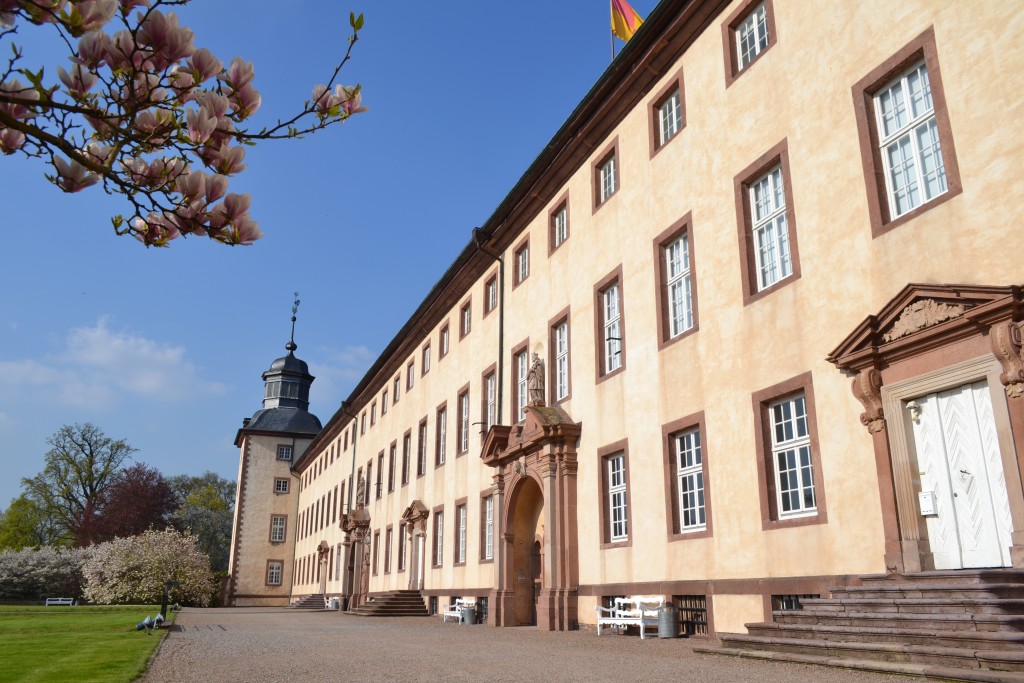 The Benedictine Abbey at Corvey, representing 1,000 years of monastic life, had one of the most extensive libraries of its time.

Considered one of the most important monastic establishments in medieval Germany, it represents nearly 1,000 years of monastic life. As one of the most complete preserved Carolingian facades in the world, the westwork design on the chapel is punctuated by two tall towers. The imperial abbey itself was visited by numerous kings and emperors. Its library is considered one of the most extensive of its time. Today the abbey complex features a museum, restaurant, wine house and hotel, and is close to the Weser bike path.

Groups might also enjoy a tour of the Dornroeschenschloss, or “Sleeping Beauty Castle,” at Sababurg, in the heart of the Reinhards Forest near Kassel. The castle, built in 1334 on a high hill, is a Brothers Grimm site on Germany’s Fairy Tale Road. The medieval vaulted cellar and open-air stage in the inner court are regular locations for plays, lectures and concerts. A zoo is located at the foot of the castle. Founded in 1751, it is home to 700 animals of 80 different species, and is one of the largest and oldest zoos in Europe.

Not far away is Hannoversch-Münden, a pretty little town where the rivers Werra, Fulda and Weser meet. The town was founded between 1155 and 1183 by Thuringian landgraves (counts), with the numerous beautiful half-timbered structures displaying their wealth. Attractions here include the Town Hall with its colorful old inscriptions and coat of arms, the Municipal Museum in the Guelf Castle and especially its lacework vases, and the Weserliedanlage, a vantage point where the three rivers converge.

A number of half-timbered homes here have particularly beautiful and original scrollwork imbedded in their exterior walls. Be sure to see the Verger’s house of the Church of St. Blaise, constructed in 1457; it’s the oldest half-timbered house in Lower Saxony bearing a date, inscription and decorative elements. Built around 1660, the house at Siebenturmstrasse has the longest inscription to be found in Münden, containing more than 28 fish and mythical animals from the river and sea. 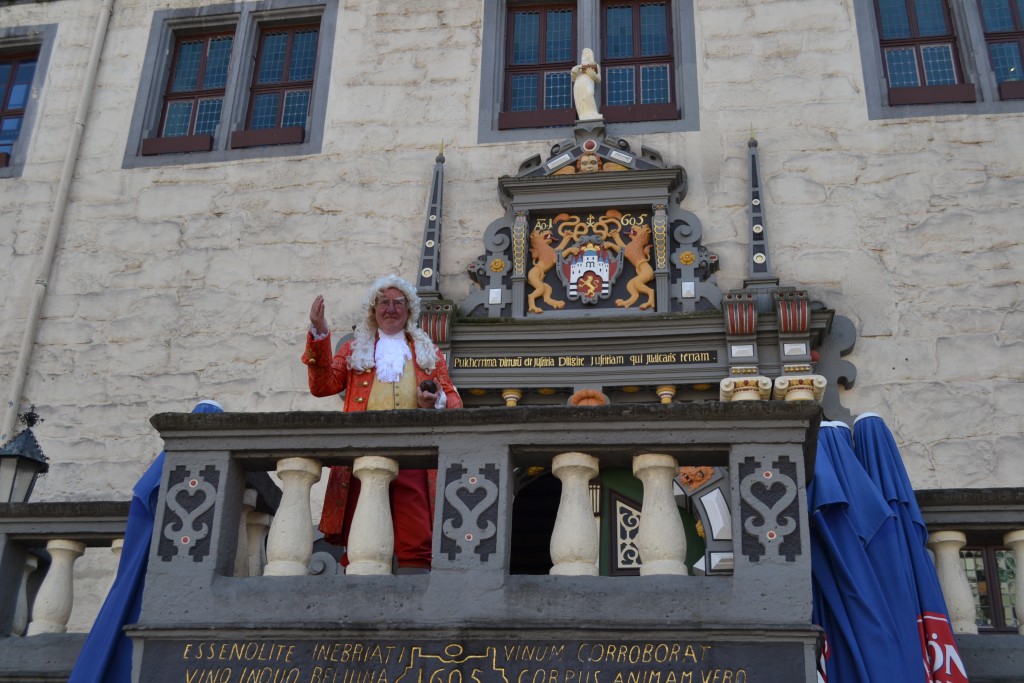 Dr. Johann Eisenbart, who practiced in Hannoversch-Münden in the 18th century, is brought back to life as a promotion for the city. Here he waves from the town hall.

Additionally, the town was the home of Doctor Johann Andreas Eisenbart, an itinerant 18th century physician who is said to have been a quack, but the town takes advantage of his fame with a costumed character and occasional appearances of the doctor at special events and on certain days of the week.

At the Town Hall, groups can tour the eco-friendly Ratsbrauhaus Brewery for a tour of the facilities, sample the various beers and then dine at the brewery’s buffet table.

At the Biohotel Werratal in Hannoversch-Münden, it’s green through and through. The hotel has long been committed to the environment, and each business decision is carefully considered how it might affect others, the brewery’s neighbors and its surroundings. As an example, the hotel uses energy-saving lamps and LEDs and environmentally-friendly cleaning products. The hotel has reduced water consumption by 50% and has a night reduction of the heating system. For its restaurant the hotel uses 100% organic food. 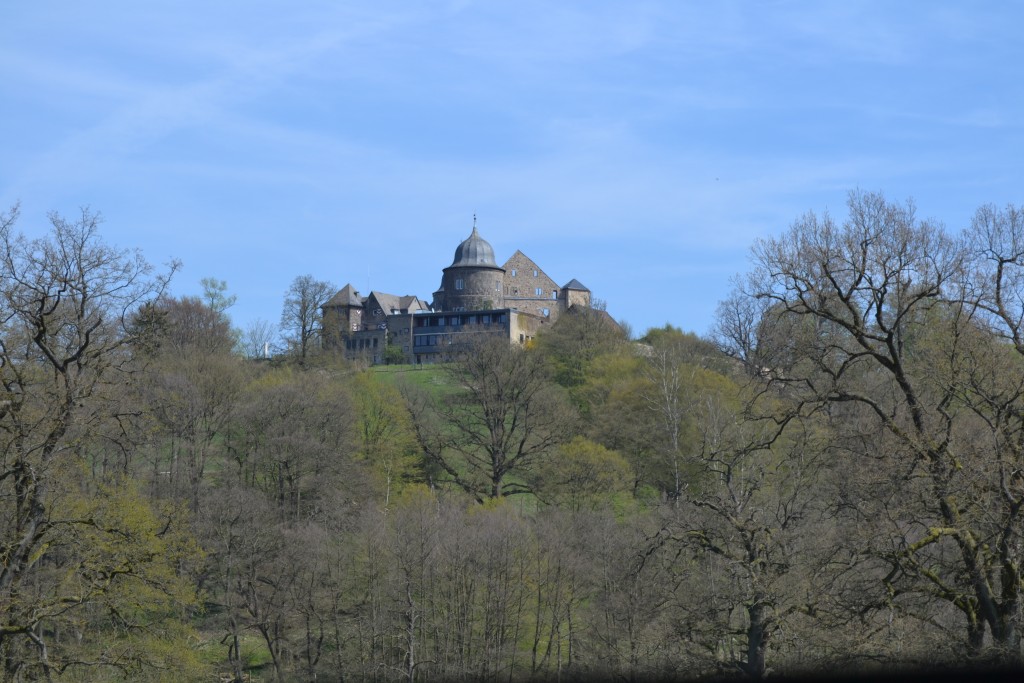 The Brothers Grimm were said to be frequent guests at the Sleeping Beauty Castle, or Dornroschenschloss, a 14th century castle at Sababurg.

The castle ruins of Hanstein near Göttingen is one of the more famous and interesting castle complexes in central Germany. In its present form, it was constructed in 1308 and was added to throughout the years. From its north towers you can see as far as the Brocken Mountain in the Harz mountain range. For more information, go to Germany Travel Naturally Unique

Don Heimburger experienced this eco-friendly region of Germany as part of the 2015 German Travel Mart, a once-a-year travel conference sponsored by the German National Tourist Board.