Savvy tour planners from around the world certainly have the South’s largest city and Georgia’s capital, Atlanta, in their sights. But more groups are packing for extra days and exploring the other gems that Georgia offers. Come along as we discover the charm, elegance and hospitality of Southwest Georgia’s Presidential Pathways, Plantation Trace and Historic Heartland regions.

Our journey begins in LaGrange, just an hour’s drive from Atlanta down I-85. Hills & Dales Estate, the home of textile giant Fuller E. Callaway, Jr, was completed in 1916. The home blends seamlessly with the lovely boxwood gardens that have plantings dating to the mid-19th century. 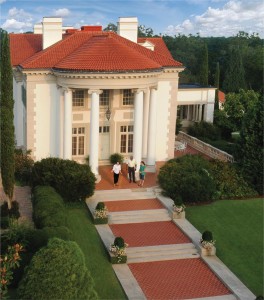 Explorations in Antiquity Center presents an interactive look at life in biblical times. Whether visitors are part of a faith-based travel group or simply looking to experience the biblical world’s history and culture, this is a must stop. Lives of shepherds, villagers and farmers are presented along with ancient tomb reconstructions, a Roman market and Roman theater. A highlight of any visit is the collection of artifacts offered by the Israel Antiquities Authority. The 250 pieces are displayed in living settings. One of only a dozen locations worldwide to have such a collection, the display is kept in a climate-controlled, earthquake proof facility. Explorations in Antiquity Center will be significantly expanding over the next few years.

Once a prosperous railroad town, Richland fell on hard times when the railroad departed. Today, the small town is a true renaissance story. The leader of the movement is Richland Rum, a single-estate rum that’s handcrafted in small batches, distilled in copper pots and aged in American oak barrels. The secret to the artisan rum’s success is the sugar cane grown on their estate’s farm. Richland Rum will convert you to a rum drinker.

Just east of Richland is Plains, the hometown of the 39th president of the United States. The Jimmy Carter National Historic Site includes Carter’s boyhood home and farm, Plains High School Museum and Visitors Center and the Plains Railroad Depot that was his national campaign headquarters. Yes, Billy Carter’s Service Station is still there.

Just a short drive east is Americus, an ideal hub-and-spoke center for Southwest Georgia tours. The Best Western Plus Windsor Hotel celebrated its grand re-opening in 2010 with President and Mrs. Carter cutting the ribbon. Built in 1892, it mirrored the finest hotels of the 19th century and today offers 53 individually appointed guest rooms. Plan your visit to Americus around a performance at the historic Rylander Theatre. Built in 1921, it closed its doors 30 years later, but was restored and reopened in 1999. A visit to the Habitat for Humanity Global Village & Discovery Center provides insight into world poverty and solutions through housing.

Andersonville, possibly the most infamous of Civil War prisons, is a short drive from Americus. Established as the Andersonville National Historic Site in 1979, it has three main features. The Prison Site commonly called Andersonville was built to relieve Richmond prisons and get Union soldiers away from the fighting. More than 26,000 struggled to survive the horrors of their everyday life. Today, white stakes mark the “deadline” area from the original site. Sentries shot prisoners wandering across that space. The National Prisoner of War Museum also serves as a visitor’s center. It reminds us that since the American Revolution our soldiers have been captured and held as POWs. The Andersonville National Cemetery serves as a final resting place of honor for veterans, including prisoners who died in the prison.

Next stop is Leslie and its Georgia Rural Telephone Museum, home to the largest collection of telephones and telephone memorabilia in the world. Housed in an old cotton warehouse, the exhibit contains rare switchboards, early pay phones and wall phones, and service vehicles. What’s the earliest phone you remember? 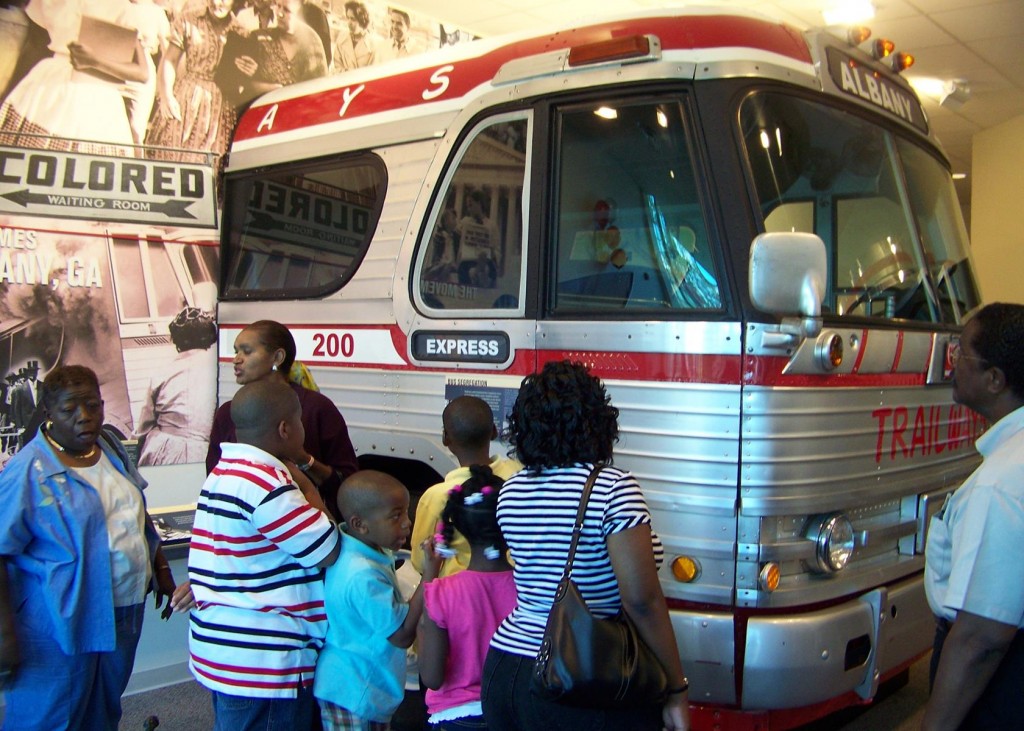 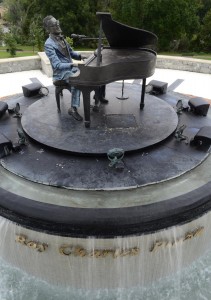 We’re on to Albany with first stop at the sapphire waters of Radium Springs. In the 1920s a resort and casino in the roaring ’20s overlooked the refreshing waters. Visitors still find the springs a relaxing place to go, often with a picnic lunch. The Albany Civil Rights Institute tells the story of African-Americans during the 1961-1962 Albany Movement and chronicles the events that took place throughout the country. You’ll hear the incredible story of the visit to Albany’s Old Mount Zion Church by Dr. Martin Luther King, Jr. A short walk from the Albany Visitor Center is Ray Charles Plaza. A life-size statue sitting at the piano honors Albany’s famous native son.

Just outside of Albany is a former 1,600-acre plantation that was the property of the largest slaveholder in Georgia. In 2011 New Communities, an organization dedicated to empowering the community through agribusiness and economic development, purchased the property. Renamed Resora, the property serves as headquarters for the organization, a farm, and a retreat and conference center for racial healing. A faith-based retreat with overnights in the cabins is an uplifting experience. 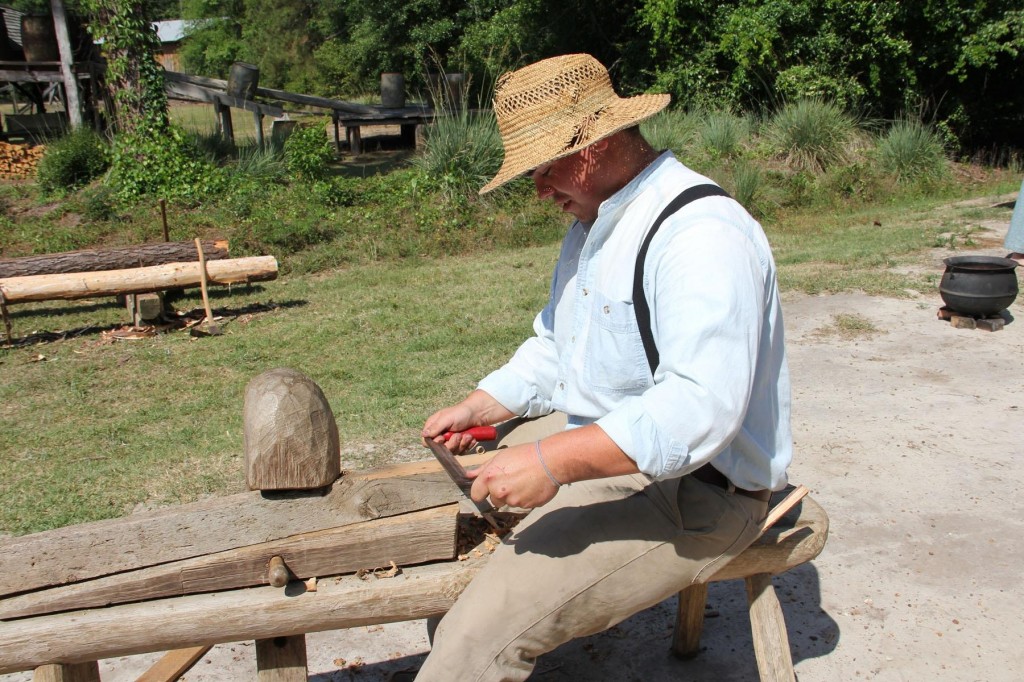 If you had any doubt that agriculture in Southwest Georgia was important, our next two stops should be convincing. The Georgia Museum of Agriculture & Historic Village in Tifton is a must see. The area consists of the Museum of Agriculture Center and more than 35 structures faithfully resorted to their period. There are numerous hands-on programs available to groups. Off I-75 at Exit 142 you’ll find Lane Southern Orchards in Fort Valley. A stop for lunch at the Peachtree Cafe and Bakery is advised, but plan to stay for a farm tour and some shopping at the Roadside Market.

Moving on to Warner Robins a stop at the Museum of Aviation should be on every itinerary. A U.S. Air Force museum, it’s one of the largest aviation museums in the United States. Collections include an SR-71 spy plane and a large number of fighter aircraft, including a Thunderbirds F-16 and a F-4D that recorded two MiG kills during the Vietnam War. Exhibits include tributes to the “Hump” Pilots of the China Burma India theater during WWII, the Tuskegee Airmen and the Korean War.

Plan to spend a few nights in Macon. There are plenty of choices to fill your itinerary. An entertaining option is a visit to the Grand Opera House. It’s dark you say? Talk to the CVB and inquire about a tour, a catered dinner on stage and live entertainment by Macon Pops and the Hayiyah Dance Theatre. The Ocmulgee National Monument is testament to people living in the area for 10,000 years; visitor center exhibits describe human habitation of the site. The Hay House reflects a true statement of luxury in an antebellum home that was featured on A&E’s “American Castles.” Private dinners can be arranged in the magnificent dining room. The largest facility in the Southeast dedicated to African-American art, history and culture, the Tubman African-American Museum should not be missed.

Just an hour south of Atlanta is the beautiful 1,500-acre cattle ranch, The Rock Ranch. If there was ever a perfect destination for a family reunion, this might just be the place. More than two dozen attractions from cane pole fishing and paddleboats to the Zip Line/Rock Wall and Rock Ranch Railroad will keep your group busy. A Conestoga Camp Out complete with hayride will appeal to the more adventuresome, while four chic cottages will satisfy those in need of a little more comfort.

Although they are an eclectic mix of tour options that await you in these hidden gems of Southwest Georgia, rest assured you’ll experience true Southern hospitality and charm at every stop. Start planning at exploregeorgia.org.