Historic Ford’s Theatre was the site of President Lincoln’s assassination on April 14, 1865. Since its reopening in 1968, the theater has hosted millions of visitors and is one of the most visited sites in the Nation’s Capital. 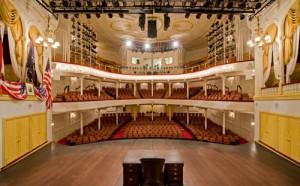 The theater’s main goal is to celebrate and preserve the legacy of Abraham Lincoln through education and theater productions. The recently renovated theater includes 699 seats (all newly replaced), upgraded lighting and sound systems, and updated stage features for casts and crews.

Roughly one million visitors each year come to take part in the historical and cultural experiences that Ford’s Theatre has to offer. Recent shows include Big River, Meet John Doe and The Heavens are Hung in Black. The 2011-2012 calendar includes the Tony Award-winning musical Parade, Sept. 23-Oct. 30; A Christmas Carol, Nov. 18-Dec. 31; and 1776, March 9-May 19, 2012. 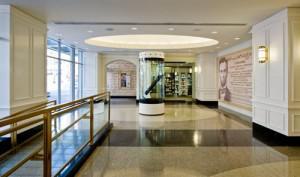 Ford’s Theatre Museum focuses on Washington D.C. and the United States during the 1860s. Exhibits take visitors through Lincoln’s presidency and the Civil War. The gun that John Wilkes Booth used to kill Lincoln is on display along with his compass, diary and knife, as is Lincoln’s clothing from the night of the assassination. Group visits can include a ranger presentation about the theater and assassination.

The Petersen House (closed for renovation at least through mid-June), located across from Ford’s Theatre, is where Lincoln was brought after being shot. He died in a back room the morning following the shooting.

Center for Education and Leadership

Scheduled to open in 2012, the Center for Education and Leadership will be located directly across the street from the theater and provide interactive displays exploring Lincoln’s legacy. The center will also include a Lincoln Memorial Theatre, exploring the effects Lincoln had on social change as well as two floors of studios to house workshops for groups after their visit.