Cruising the Atlantic Coast with nearly three thousand other passengers on the Carnival Glory, we couldn’t have asked for fall weather more glorious. Glad that we had packed shorts and T-shirts as well as sweaters and sweatshirts, we reveled in the unusually warm temperatures and didn’t even need a jacket the first three days. Indian summer it was.

Our early October sailing, a seven-day roundtrip from New York, called at two New England ports—Boston and Portland, Maine—before continuing north to Canada’s Maritime Provinces, with stops in Saint John, New Brunswick and Halifax, Nova Scotia. New York is probably my favorite city in the world, so it’s a real plus whenever I can sail from there (and, of course, stay a few days before or after the voyage).

The Hudson River cruise-ship piers may not be the most inspiring slice of New York City, but the 77-degree day and anticipation of our “foreign” trip eclipsed the less-than-scenic surroundings. Soon Carnival Cruise Lines’ mega-ship was gliding past the Manhattan skyline into New York Harbor, passing two powerful symbols of the American story—Freedom Tower rising at the World Trade Center and the Statue of Liberty.

Boston in a Nutshell 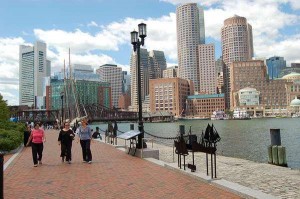 Just before 2 p.m. the next day our ship arrived in “America’s Walking City,” blessed with its own share of patriotic landmarks. We had a good five hours to explore the historic core of Boston before dinner. On this picture-perfect day in the low 80s, we hoofed it along the scenic HarborWalk, getting to Faneuil Hall in 40 minutes. After soaking in the festive pedestrian marketplace, alive with street performers, kiosk vendors and outdoor restaurants, we entered the 1761 landmark for a ranger’s talk about the hallowed assembly room where early revolutionaries met. We then wandered across the plaza to Quincy Market, successfully resisting the gourmet brownies, ice cream and other treats.

From Faneuil Hall we followed the Freedom Trail—marked by a red line on the sidewalk—to Boston’s North End, where Revolutionary history resounds on the narrow streets. It was late afternoon, but we still got some decent pictures of the Paul Revere House, the equestrian statue of Revere, and white-steepled Old North Church. Also fun was popping into Italian shops in this old ethnic neighborhood. To fortify ourselves before the trek back to the ship, we stopped for a chewy slice at Ernesto’s Pizzeria, a storefront place decorated with pictures of Frank Sinatra, Sophia Loren and The Godfather movies. 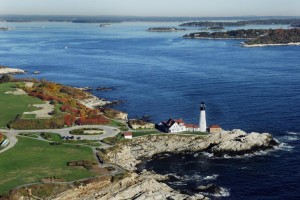 The cruise terminals in Maine’s largest city (pop. 65,000) are located right on the working waterfront, just steps from specialty shops and art galleries in vintage brick buildings flanking the Old Port district’s cobblestone streets. You can browse a dockside fish market, pose next to a stack of lobster traps or string of buoys, watch the seagulls and smell the salt air, stop for a lobster roll or bowl of creamy chowder. It doesn’t get more coastal New England than this. We couldn’t help buying a lobster stuffed animal, lobster-print socks and a silly lobster hat.

Many boutiques and pubs were decorated for Halloween, adding a layer of festivity to their funky vibes. To toast the season we sampled Pumpkinhead ale (with pumpkin pie spices) during a free tour of Shipyard Brewery. Back on the ship that night, baseball fans were in the sports bar watching the MLB playoffs while others huddled in blankets to watch Monday Night Football on the Lido Deck’s theater-size screen—two other signs of October in America. 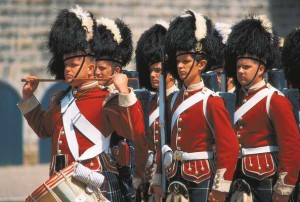 The Carnival Glory docks right in the center of Saint John, a small city just 70 miles from the Maine border. One shore excursion provides an all-day pass on Ambassatours Gray Line’s Big Pink double-decker buses (pink to promote breast cancer awareness). The hop-on, hop-off service (also available in Halifax) offers three loops with stops at attractions like the New Brunswick Museum, shopping areas, and Fallsview Park for views of Reversing Falls, a wild phenomenon in which rapids and whirlpools caused by the Bay of Fundy’s high tides force back the St. John River.

Of the cruise line’s 17 Saint John offerings, we chose “Top 10 Best of Saint John,” a full-day tour that combined city sights with New Brunswick’s countryside. In the fishing village of St. Martins, lunch was at The Caves restaurant, where we savored its “world-famous” chowder at an outdoor table overlooking the picturesque Sea Caves. At low tide you can walk from the beach and explore the red-rock outcroppings carved out by ocean waves.

Another photo op in St. Martins is a spot where you can get two covered bridges in one picture. Our guide, Kelly Anne Loughery, helped us frame the shot without getting run over by cars. Dressed in the garb of British Loyalist refugees who fled to Canada during the American Revolution, she really made the trip, regaling us with tidbits about historical events, moose hunting, lobstering and all things New Brunswick.

A tour highlight was feasting on the scenery as our bus skirted the Bay of Fundy and rolled through farmlands and villages with quaint country churches. The fiery red and electric-yellow leaves of turning maple trees flecked the spruce and fir forests, providing the only fall foliage on our week-long October odyssey. The trees were still green elsewhere.

At the Maritime Museum of the Atlantic we learned about Halifax’s role as the rescue and recovery center following the 1912 Titanic disaster. A video and Titanic artifacts, including a deck chair, tell the tale.

On a city tour after lunch, we visited Fairview Lawn Cemetery, where 121 Titanic victims are buried under simple granite markers engraved with the same date of death: April 15, 1912. The Citadel, a star-shaped British fort high above downtown, was our other stop, affording panoramas from the ramparts and chances to interact with kilted 78th Highlander re-enactors.

Before reboarding the ship, we had time to breeze through the Canadian Museum of Immigration at Pier 21, conveniently located next to the cruise terminal. Occupying the hall that welcomed a million immigrants from 1928 to 1971, it offers powerful displays and video accounts, much in the manner of New York’s Ellis Island museum. 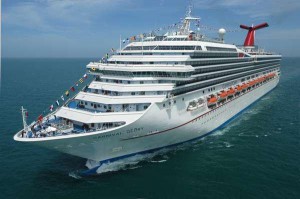 What we didn’t see in the way of autumn glory ashore on our fall frolic was made up for by the Carnival Glory’s decor, a kaleidoscope of hues that wowed us at every turn. In fact, the ship’s design scheme is based on a colors theme. From the metallic tones of the Golden and Platinum Dining Rooms to Bar Blue and golf-themed On the Green bar, it’s a rainbow of color-drenched impressions. Reds accent the Cinn-A-Bar lounge, deep greens the Emerald Room Steakhouse. We spent a lot of time at the Lido Deck’s nautically-themed Red Sail buffet restaurant and visited adjacent food stations serving pizza, burritos, deli sandwiches, fish ’n’ chips station and Asian fare.

My favorite room was the Amber Palace show lounge, a symphony in red and gold right out of imperial Russia, complete with eagle motifs, crystal chandeliers, mirrored pilasters and brocaded seats. Another signature spot: The Old Glory Atrium and its Colors Lobby and Bar, dominated by glass elevators and graced with paintings of the Stars & Stripes. The Americana carries over into stairwells with oversized artwork depicting Mt. Rushmore, the New York skyline and other classic images of the USA.

Though our sailing was fully booked, we had plenty of elbow room and never felt cramped. Lines were rarely a problem. Seniors comprised the vast majority of passengers. There were several groups, including a nursing school reunion and a Brooklyn professional women’s association.

When the Carnival Glory cruises New England and Canada next year, it will offer fresh dining options being added during a dry dock in November as part of the line’s ongoing “Fun Ship 2.0” enhancement program. New features will include Guy’s Burger Joint, a complimentary poolside venue offering fresh-made burgers, hand-cut fries, and innovative toppings and condiments created by Food Network star Guy Fieri. Also debuting next year are BlueIguana Cantina, a Mexican eatery, and the poolside BlueIguana Tequila Bar and RedFrog Rum Bar.

Five 2012 departure dates for the Carnival Glory’s seven-day New England-Canada itinerary from New York are scheduled from Sept. 8 to Oct. 6, 2012. In 2013 the Carnival Glory again will sail from New York to Canada, with five one-week departures scheduled from Sept. 7 to Oct. 5. From Boston it will offer three seven-day-cruises in June and July, with calls at Portland, Saint John, Halifax and Sydney, Nova Scotia. Shorter cruises from New York and Boston will be available throughout summer of 2013.