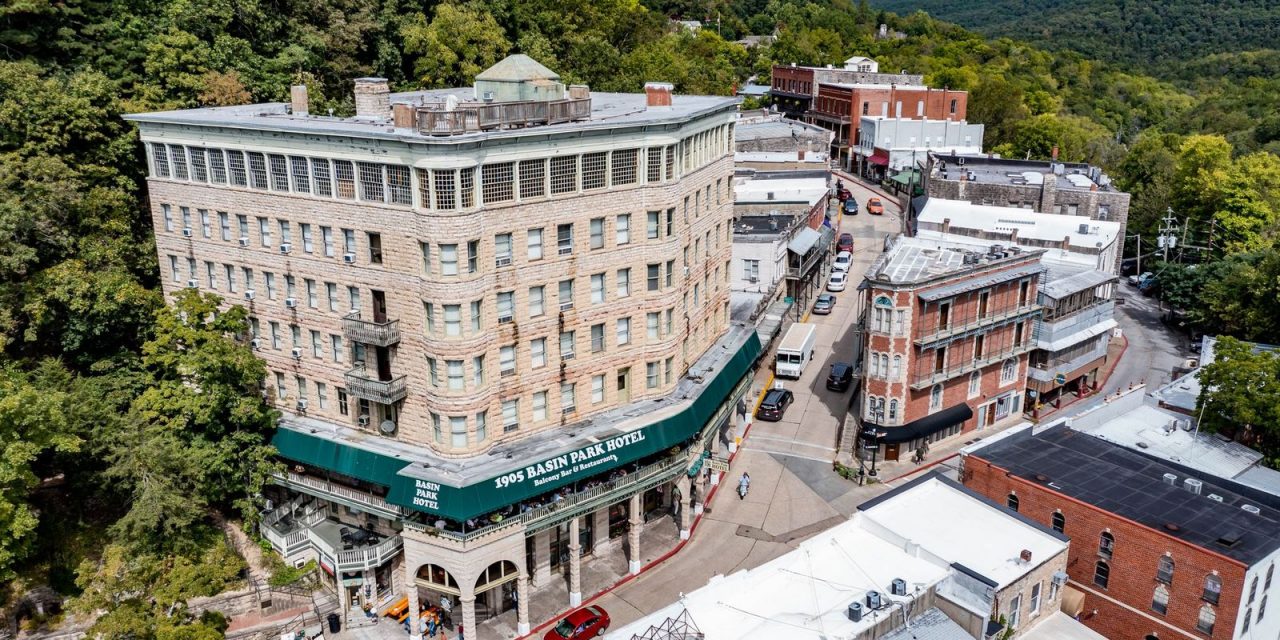 An artist colony and Arkansas’ most-talked-about tourist town, little Eureka Springs is one of America’s truly distinctive destinations. There’s really no place quite like it.

Here in this turn-of-the-20th century Victorian village, cliff-clinging cottages appear to be stacked one on top of another. Crooked streets wind higgledly-piggledy through town, meeting at right angles only once. In some cases, steep stairways substitute for sidewalks, giving Eureka Springs the nickname “Stairstep Town.” The entire downtown is listed on the National Register of Historic Places.

Founded in 1879, Eureka Springs soon established itself as a popular health resort, attracting visitors from around the country to the restorative and healing waters of its natural springs. Some guests stayed months at a time at hotels and other lodgings in the “City That Water Built” (once the fourth-largest in Arkansas). Two of the early days’ most stately hostelries, the Crescent and Basin Park hotels, are still around and combine modern amenities with touches of yesteryear. 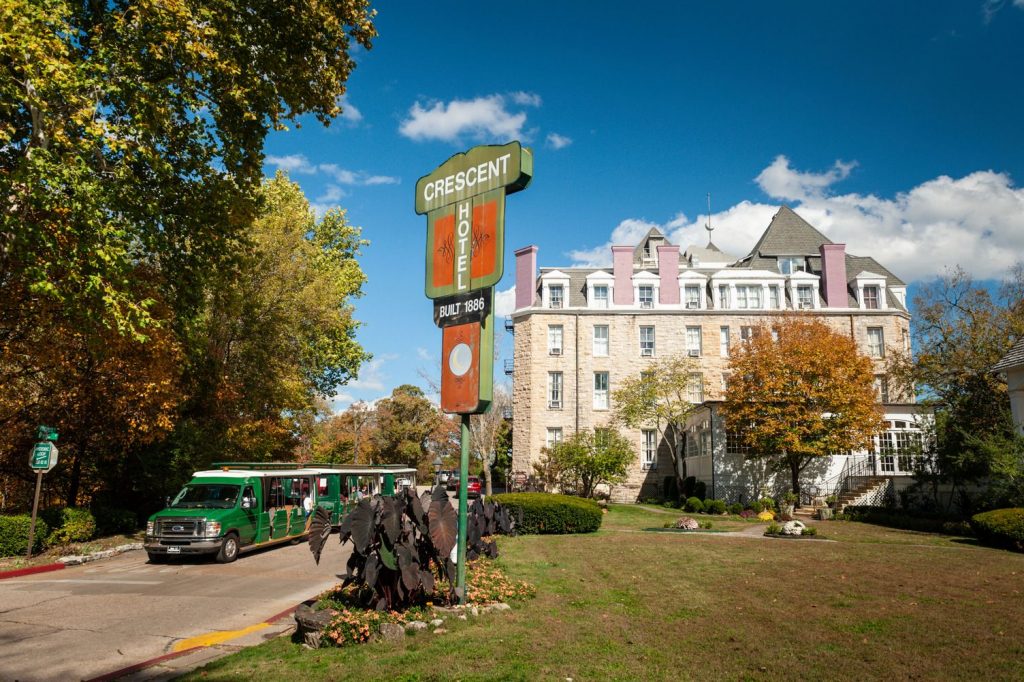 Eureka Springs’ 1886 Crescent Hotel, a member of Historic Hotels of America, is a stop on the public trolley route and on narrated tram tours. (Photo credit: Arkansas Tourism)

Grand Hotel With a Storied Past

Like Eureka Springs itself, The 1886 Crescent Hotel and Spa has a personality that definitely borders on the quirky side. This historic hilltop “castle in the air,” once billed as the “premier resort hotel of the Ozarks,” originally catered to the “carriage set.” Its affluent guests enjoyed afternoon teas, dances in the ballroom, tennis and shuffleboard courts, stables and bridle trails, and two bowling lanes (the original floor of one lane can be seen in today’s garden-level New Moon Spa & Salon).

To supplement business in the low season, the hotel in 1908 became the site of Crescent College and Conservatory for Young Women, operating as a school from September to May and as a resort hotel from June to Labor Day. School memorabilia is displayed on the fourth floor. The Great Depression caused the hotel and school to close in 1934.

Three years later, millionaire businessman Norman Baker in 1937 bought the majestic limestone building and turned it into a cancer hospital, a clinic touted as the “World’s Most Beautiful Health Resort” and a place “Where Sick Folks Get Well.” But the shady “doctor,” a man with no medical training but claiming to have the cure for cancer, was convicted of mail fraud and the hospital closed in 1940.

The Crescent reopened as a hotel after World War II and was renovated twice before owners Martin and Elise Roenigk, a preservation-minded couple from Connecticut, bought it in 1997 and spent millions in improvements to the “Grand Ol’ Lady of the Ozarks.” (Elise lives on the building’s top floor and is philanthropically involved in the community. Martin died in 2009.) 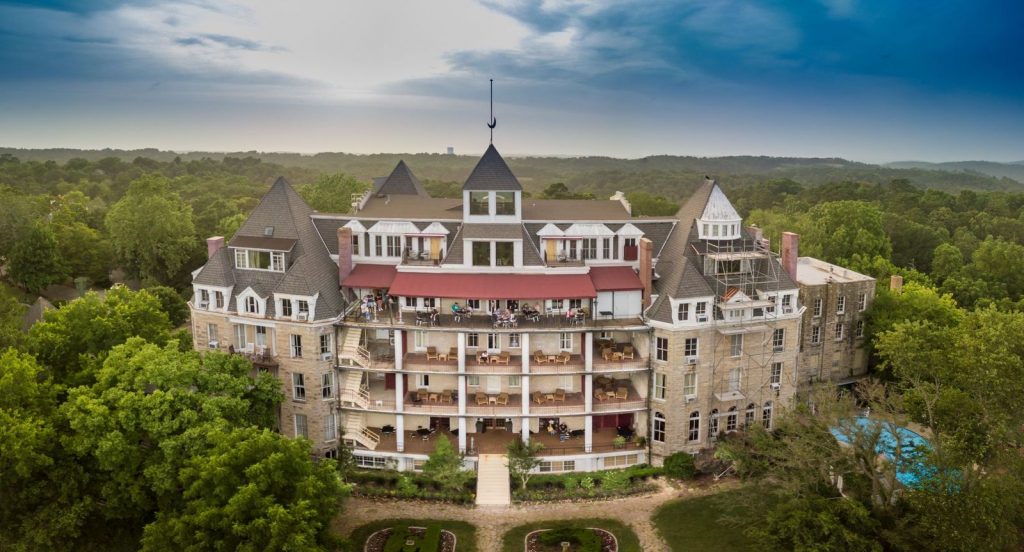 Talk about a hotel with character. What fun it is roaming the warped floors of the dim, high-ceilinged hallways. Guests encounter cockeyed door frames, scratched woodwork, peeling paint, chipped plaster, and old-fashioned, steam-heat radiators. Some of the wood obviously has been painted over many times.

Breakfast is served in the Crystal Dining Room, the former ballroom, a cavernous space with tall windows and crystal chandeliers. At dinner time the room becomes La Cena, an Italian restaurant with red-and-white-checked tablecloths. One night I feasted on chicken pesto Alfredo pasta, phenomenal garlic butter breadsticks and a huge square of tiramisu. The room’s two hutches are the only original pieces of furniture in the hotel.

Out in the lobby, you may find Jasper, a big black cat with a white chest and paws, curled up on the floor, perhaps on the rug by the vintage organ. Jasper continues the tradition of the hotel’s long line of resident cats.

Each guest room at the Crescent Hotel is different. I stayed in Room 219, which had a wooden rocking chair, beautiful armoire, granite-topped nightstands and a blemished dresser that looked like it had been there for decades. One wall consisted of exposed brick and cement mortar. The mattress, pillows and plush white towels were comparable to those found in any top hotel, and there were a refrigerator, coffeemaker and television. The bathroom was totally up to date. 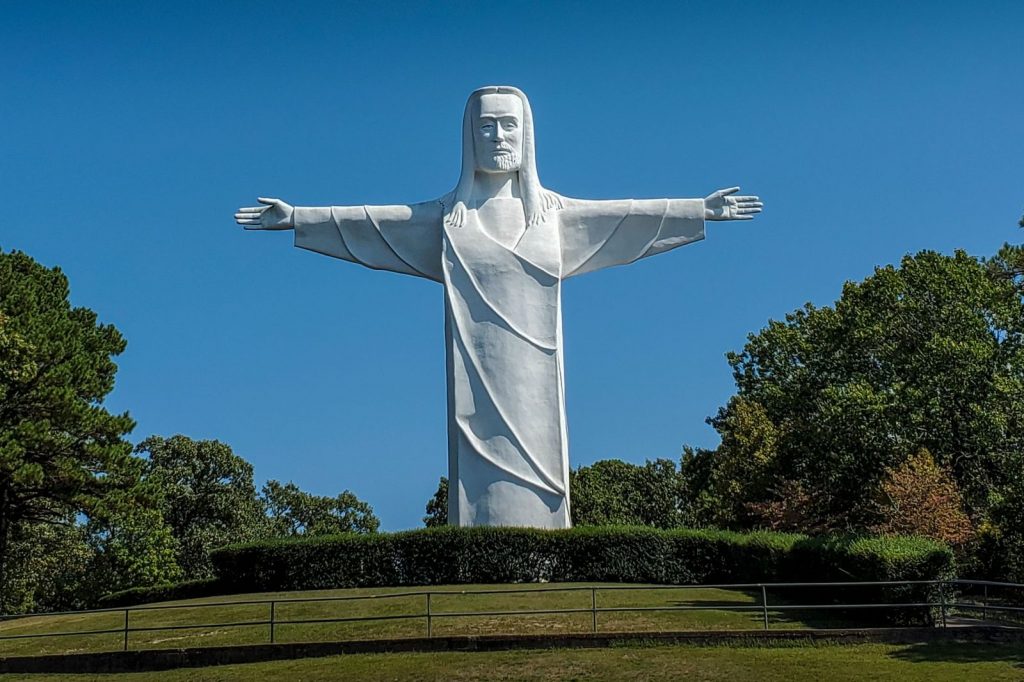 The Christ of the Ozarks statue, measuring 67 feet tall, is visible from the 1886 Crescent Hotel. (Photo credit: Arkansas Tourism)

From my spacious, enclosed balcony, which had two table-and-chair ensembles, I had views of the hotel garden, woodlands and Saint Elizabeth of Hungary Catholic Church, a limestone beauty with a bell tower and red-tile roof. Mountain ridges loomed in the distance, and I could spy the gleaming white, 67-foot-tall Christ of the Ozarks statue, a local landmark, across the valley. A five-mile hiking trail loops through the Crescent property.

The hotel’s fourth-floor Sky Bar pizzeria and Top of the Crest cocktail bar also have outdoor areas that showcase the Ozarks’ splendor and are prized spots at sunset. Across the hall are exhibits of old hotel photos, brochures, ads, postcards and newspaper clippings. One local report on the Crescent’s 1886 opening called it “the most luxurious resort hotel in America” and “a showplace of today’s conveniences.” 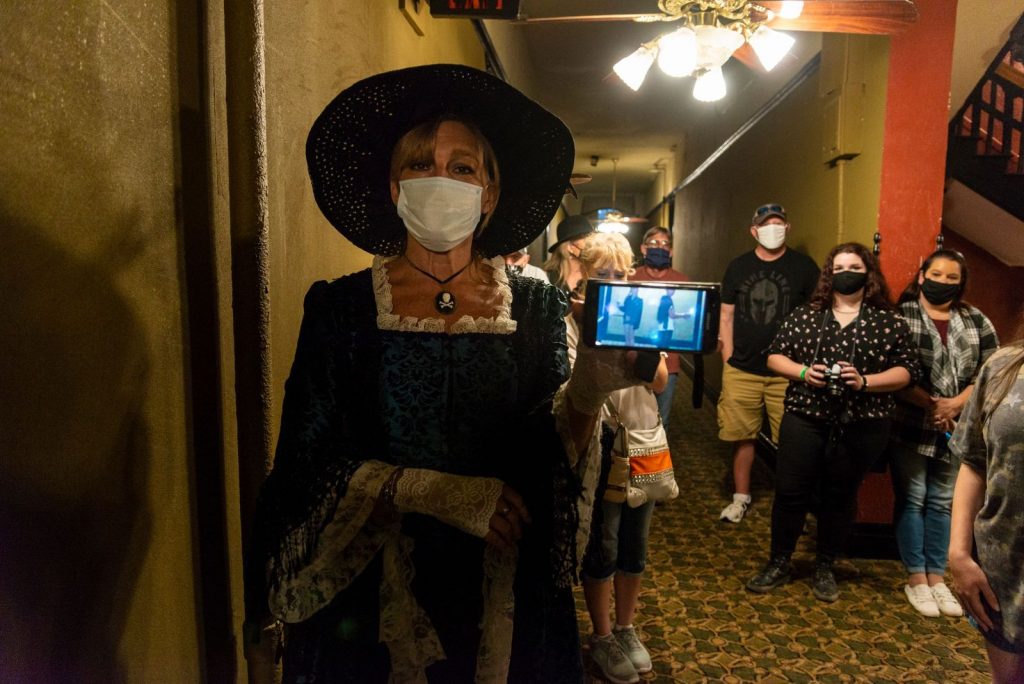 Even for those not staying overnight, the Crescent may be part of their Eureka Springs itinerary, as “America’s Most Haunted Hotel” is known for its nightly ghost tours. The last stop on the tour is the “morgue,” a space that long ago served as the hotel’s kitchen and later the cancer hospital’s autopsy room. On display are the autopsy table and walk-in cooler where Baker kept cadavers and body parts. Shelves contain jars of fleshy tissue floating in liquid, medical specimens (perhaps tumors) discovered in 2019 during a certified archaeological dig on the hotel grounds. They apparently had been surgically removed from patients. Besides a ghost tour, groups can book a theatrical presentation by a local actor who takes on the persona of the infamous Baker.

Some people on our macabre tour were so fascinated with the tales of ghostly spirits that they reserved tickets—on the spot—for the “Paranormal Investigation” being led by the same guide an hour later at the 1905 Basin Park Hotel, the Crescent’s sister hotel in downtown Eureka Springs. The eight-story building resides next to Basin Spring Park, a focal point of public entertainment and the site of the town’s original healing spring. Tours of the town’s underground tunnels start at the park. 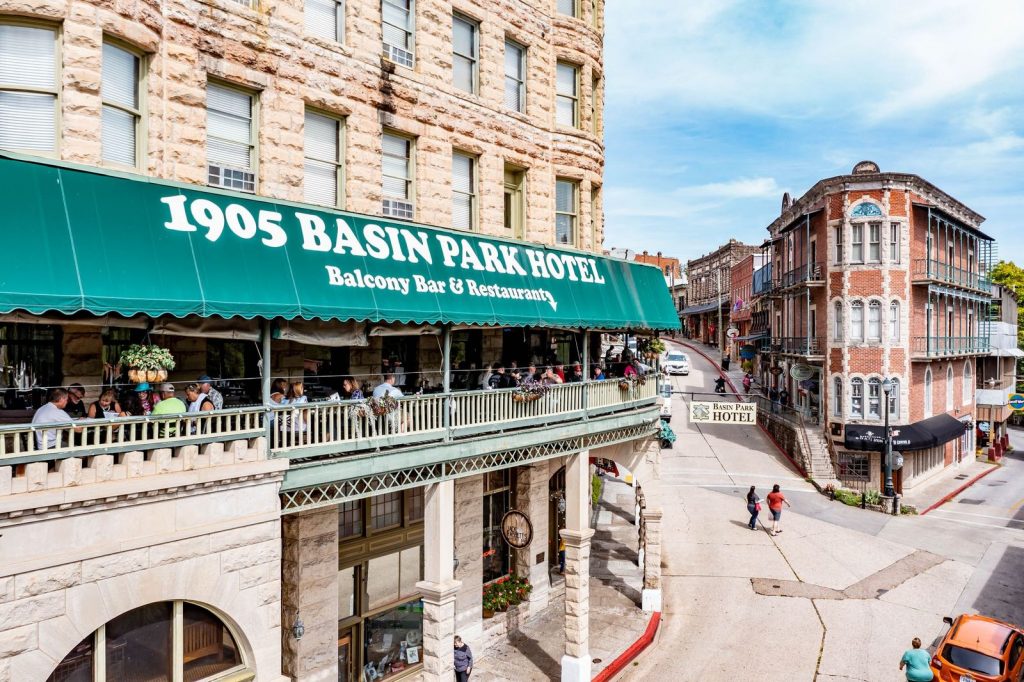 The Basin Park’s Balcony Bar & Restaurant, with outdoor seating overlooking Spring and Center streets, offers sweeping mountain panoramas. For lunch there, I enjoyed a hefty, perfectly crafted Monte Cristo sandwich dusted with powdered sugar and accompanied by raspberry jam for dipping. The eatery is famous for its huckleberry pie with huckleberry ice cream.

Art and crafts galleries are part of the commercial scene as well. (It’s said that the town of 2,278 people is home to some 300 artists and musicians.) Examples of public art include downtown’s oft-photographed Rainbow Stairs, a long, steep, color-splashed staircase that connects Center Street with North Main Street. 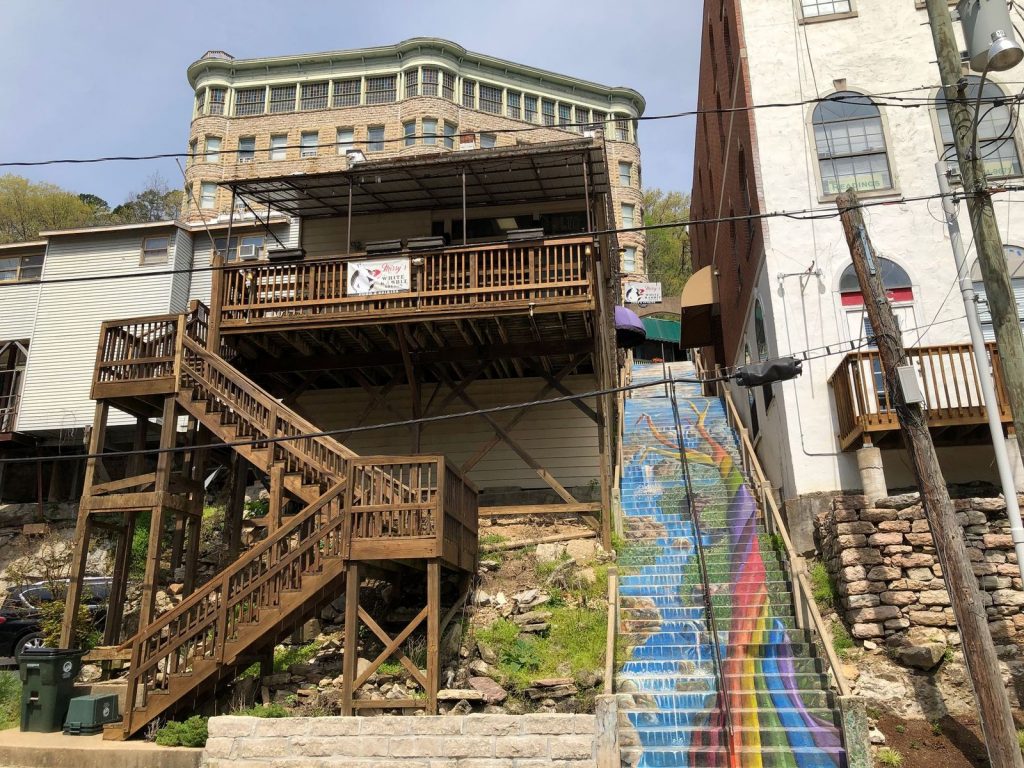 The Rainbow Stairs, a stunning work of public art, connects one level of downtown Eureka Springs to another. (Randy Mink Photo)

Eureka Springs Tram Tours conducts 90-minute narrated excursions through the historic district, with stops at the Crescent Hotel and Grotto Spring, one of the 60-plus springs inside the city limits. For those wishing to explore independently on public transportation, the Eureka Springs Transit System offers an all-day pass that is good on all four trolley routes.

Lodging options in Eureka Springs range from bed & breakfasts and rustic rental cabins to national chain hotels and mom-and-pop motels. Just outside of the historic district are the group-friendly, resort-style Best Western Eureka Inn (86 rooms) and Best Western Inn of the Ozarks (122 rooms).

The Christ of the Ozarks statue is part of The Great Passion Play campus, one of Northwest Arkansas’ top visitor magnets. Performed in a 4,000-seat amphitheater on select evenings from May through October, the epic drama about Jesus Christ’s last days on earth features a cast of over 150 actors and dozens of live animals, including horses, camels, donkeys, sheep and birds. The massive stage is three stories tall and 500 feet across. Backstage tours are available. 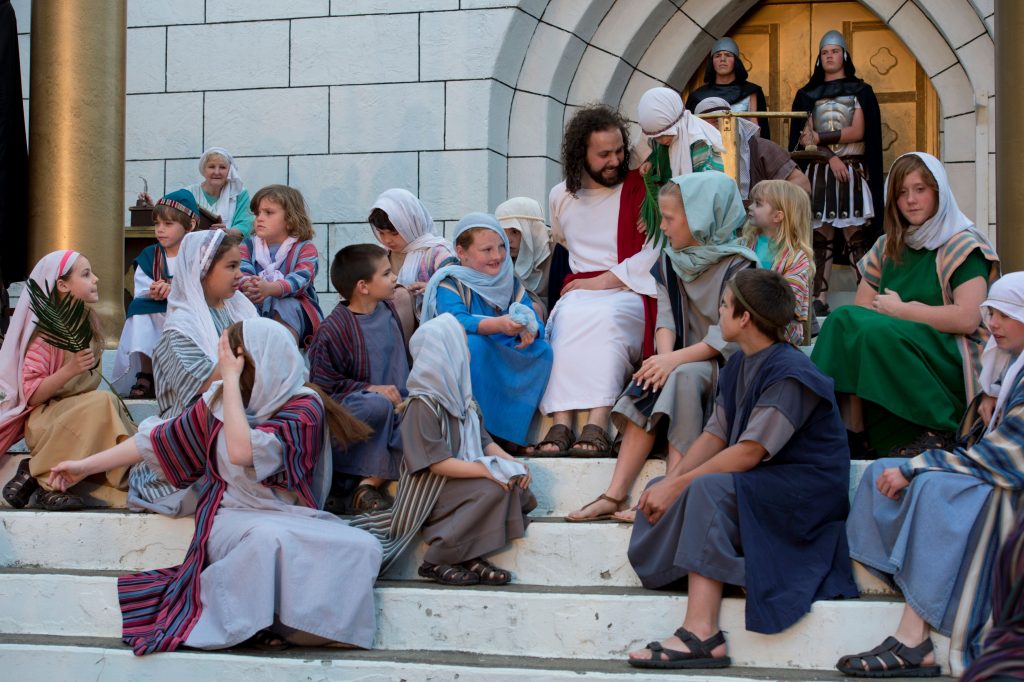 The Great Passion Play, telling the story of Jesus Christ’s last days on earth, is performed on a massive outdoor stage in Eureka Springs from May through October. (Photo credit: Arkansas Tourism)

Besides seeing the “The Greatest Story Ever Told” acted out, many groups schedule a bus tour through The Holy Land, an area of the Great Passion Play campus where they meet costumed characters at exhibits replicating the Jerusalem Marketplace, Garden Tomb, Sea of Galilee, Upper Room, Moses’ Tabernacle and other Biblical sites. The tour takes about two hours.

Also on the grounds are the Sacred Arts Museum, which displays Christ-centered art dating as far back as the 9th century, and the Bible Museum, where rare artifacts include a 1611 King James Bible, a page of the Gutenberg Bible and the first Cherokee Bible. Both museums and the Christ of the Ozarks are free, as are Noah’s Ark Park Petting Zoo, a 10-foot section of the Berlin Wall, the History Museum (on creation and mankind) and Church in the Grove, a small country church built in 1914. Groups can arrange a lunch or buffet dinner in the Great Hall building.

The Passion Play’s 667-acre property also has 20 miles of world-class mountain biking trails that are open to hikers as well. The trails are open all year, as are the Bible Museum and Holy Land tours. More recreational opportunities are available at Lake Leatherwood City Park, which has trails, cabins, camping and a lake with fishing, swimming and boat rentals.

Many Eureka Springs itineraries include Turpentine Creek Wildlife Refuge, a sanctuary for rescued tigers, lions and other big cats, most of the survivors of the exotic animal trade. A variety of guided tours and educational programs are available. On-site accommodations include tent camping and RV sites, a treehouse bungalow, and safari-themed tents and suites. 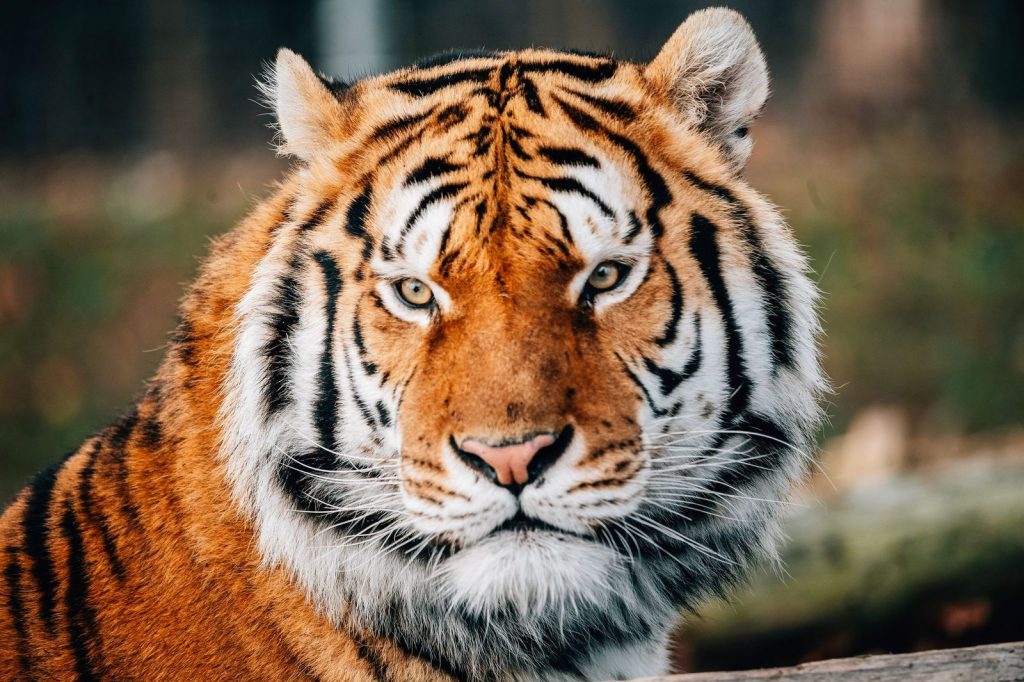 Tour organizers also might consider the Eureka Springs Historical Museum; area show caves like Cosmic Cavern, War Eagle Cavern and Onyx Cave; a Belle of the Ozarks cruise on nearby Beaver Lake; or a ride on the Eureka Springs & Northern Arkansas Railway, a tourist train known for its dining car. Also popular with groups are Thorncrown Chapel, a stunning architectural gem of wood and glass in a dreamy forest setting, and Blue Spring Heritage Center, an enchanting spot with lush woodlands and native gardens surrounding a beautiful spring.

Travelers can experience an evening of wonder at the magic show staged by illusionist Sean-Paul in the Intrigue Theater, a former church building not far from the Crescent Hotel. His performance as a Victorian-era illusionist, with Juliana Fay as the medium, blends science, mystery, illusion and spiritualism into one fun-filled, family-friendly show. In a similar vein, the 3 Fox Sisters Theater presents magic and psychic comedy shows, plus a theatrical seance experience.