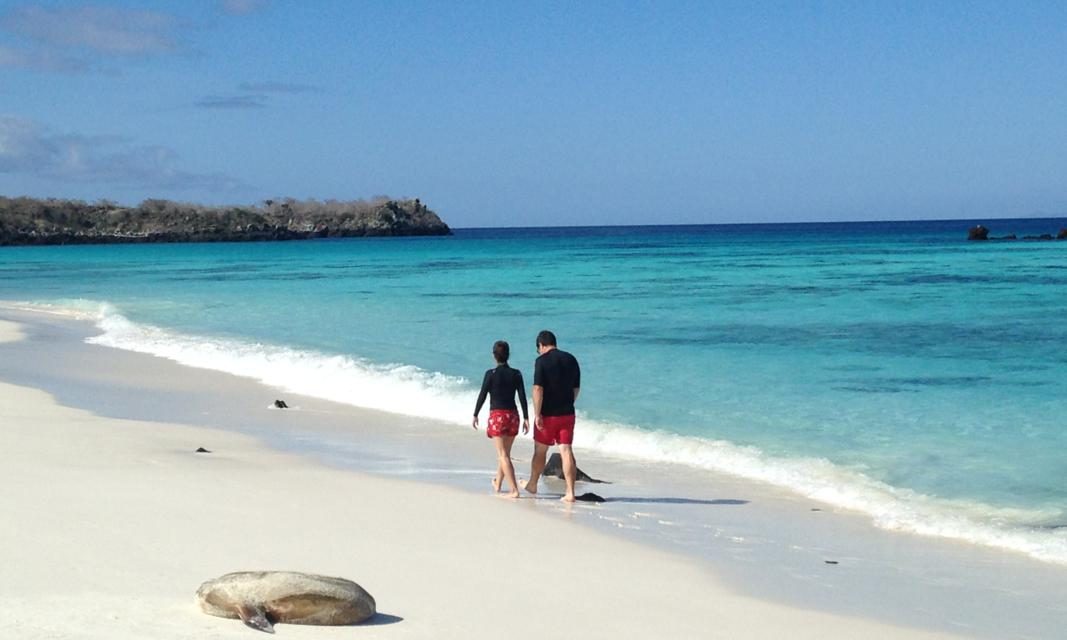 Strange animals intrigue cruise visitors on nature safaris in the Galapagos Islands, a paradise for eco-tourists

On the island of Espanola, we tread carefully on the rocky trail, trying not to step on the clusters of lazy marine iguanas littering our path. According to Galapagos National Park rules, we weren’t supposed to get within two meters (just over six feet) of the wildlife. But here, as in many other instances during a six-day cruise to this remote archipelago, keeping our distance was unavoidable. Of course, the close proximity was a photographer’s dream.
Unafraid of humans, the unusual reptiles, mammals and birds of the Galapagos don’t run, swim or fly away when approached. They roam without fear, unfazed by the presence of visitors, because they have few natural predators. 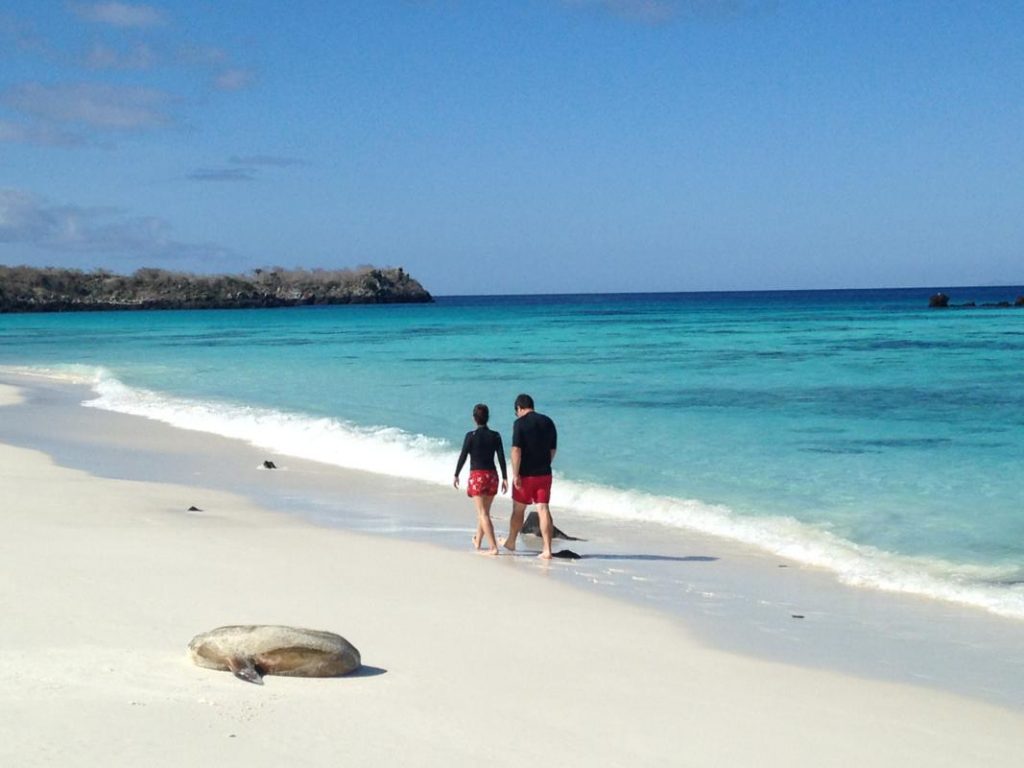 The small number of species living in isolation has fascinated scientists for generations and today brings boatloads of curious tourists to the chain of barren, volcanic islands straddling the Equator, a sanctuary administered by the government of Ecuador. Of the 13 major islands in the blue-green Pacific waters 600 miles off mainland Ecuador, only four have human settlements, but exotic wildlife abounds. In short, a trip to the Galapagos is all about nature, pure and simple.

At one point during the quirky voyage, my veterinarian daughter remarked that she felt we were no longer on Earth.
“You’re right,” I said. “It’s like we’re on another planet.”
Our home on this otherworldly eco-adventure was the newly renovated, 16-passenger Sea Star Journey, a deluxe, yacht-like vessel operated by Ecuador-based tour operator Latin Trails. Most ships in the ecologically fragile islands, in fact, are in the 12-to-20- guest range. Passenger limit in the Galapagos is 100, and a few ships hold that many.
The archipelago has more than 100 endangered species of animals and plants. Reptiles, some of them prehistoric-looking, are the most iconic creatures, with iguanas and giant tortoises being the best known. Of the islands’ 22 reptile species, 20 are found nowhere else, and about half the birds are endemic to the Galapagos.
The marine iguana is the only seagoing lizard in the world. Our guide told us they can stay underwater up to an hour. The ones we saw on our hike around Espanola Island’s Suarez Point were black with specks of red and white, but a few sported a mating-season coloring of red and pale turquoise. Their tails leave marks in the sand, like bicycle tracks.
Bird sightings on Suarez Point included Galapagos hawks, pelicans, Nazca boobies and a waved albatross, the largest seabird in the islands. Espanola, the most southerly isle in the Galapagos, claims nearly the entire world population of waved albatross. (As for the word “booby,” early Spanish sailors, unimpressed that the birds did not fly away from them, called them bobo, or stupid.)
Our group of 15 had arrived on Espanola soon after breakfast aboard one of the Sea Star Journey’s two motorized dinghies. These early-morning departures were designed to let us explore before the equatorial sun reached its height. Though we could feel the heat on Espanola, a cool breeze helped a bit and made it pleasant for hiking the rocky, unshaded paths, which were mostly flat except for two spots that called for a little uphill scrambling. Tip: bring plenty of sunscreen. I never used so much in my life.
We were back on the Sea Star Journey by 10:45 a.m. and greeted with what would become standard after time ashore—a damp towel and refreshments, which might consist of juice, tea or hot chocolate and fruit, cookies or empanadas. After a noon lunch, we had a little time to rest and then were off to Gardner Bay and its long white coral-sand beach, also on the island of Espanola. It was here that my daughter filmed me being “chased” along the beach by a sea lion, a video later viewed all over social media (“run, Dad, run”). From Day 1 the frolicking sea lion became everyone’s favorite mammal. We never tired of watching them clamber on the rocks, body surf in the waves, roll in the sand and bark at each other. They even swam with us at the beach and on our snorkeling outings, the first of which took place in gorgeous turquoise waters around an outcrop in Gardner Bay. (Though sea lions may seem playful, it’s best not to push it—they occasionally will attack a human.) 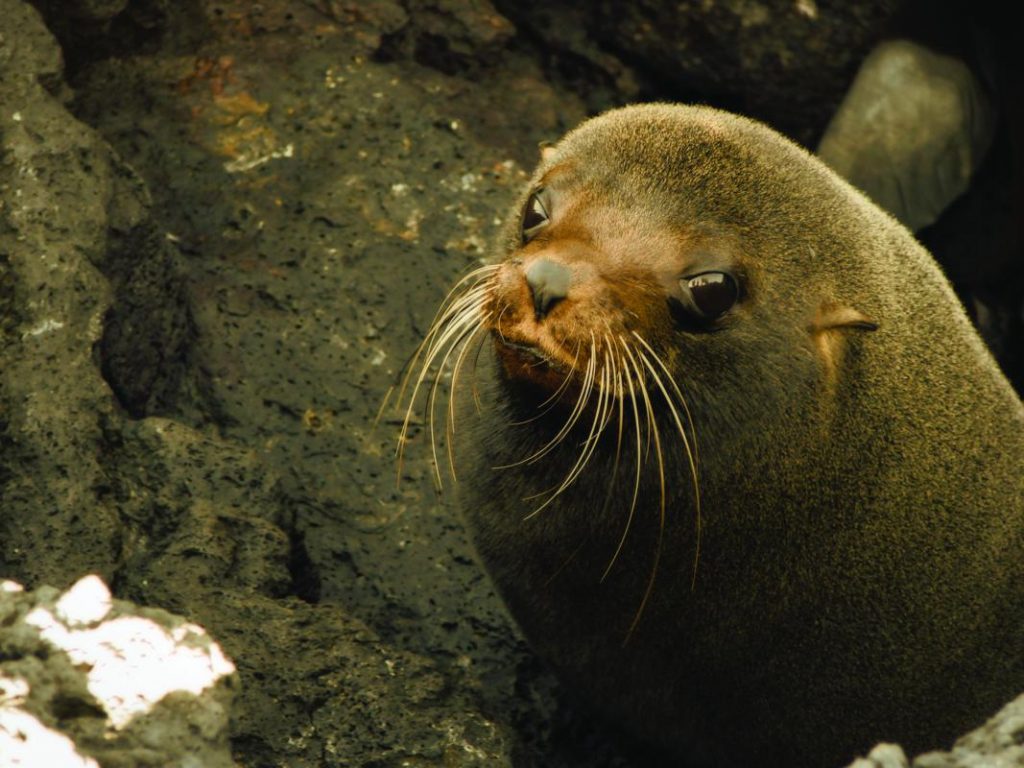 On Floreana Island the next day we hiked and snorkeled at two locations. At Punta Cormorant, right off powder-soft Flour Sand Beach, we spotted two Galapagos penguins, the most northerly penguins in the world and only species that lives in the tropics. Then we hiked to a brackish lagoon to look for Galapagos flamingos. The afternoon snorkeling session was one of our great memories as we got really close to Pacific green sea turtles, which weigh about 200 pounds and measure more than three feet long. One passenger with an underwater camera got fantastic pictures of the graceful reptiles, which can be found throughout the chain. 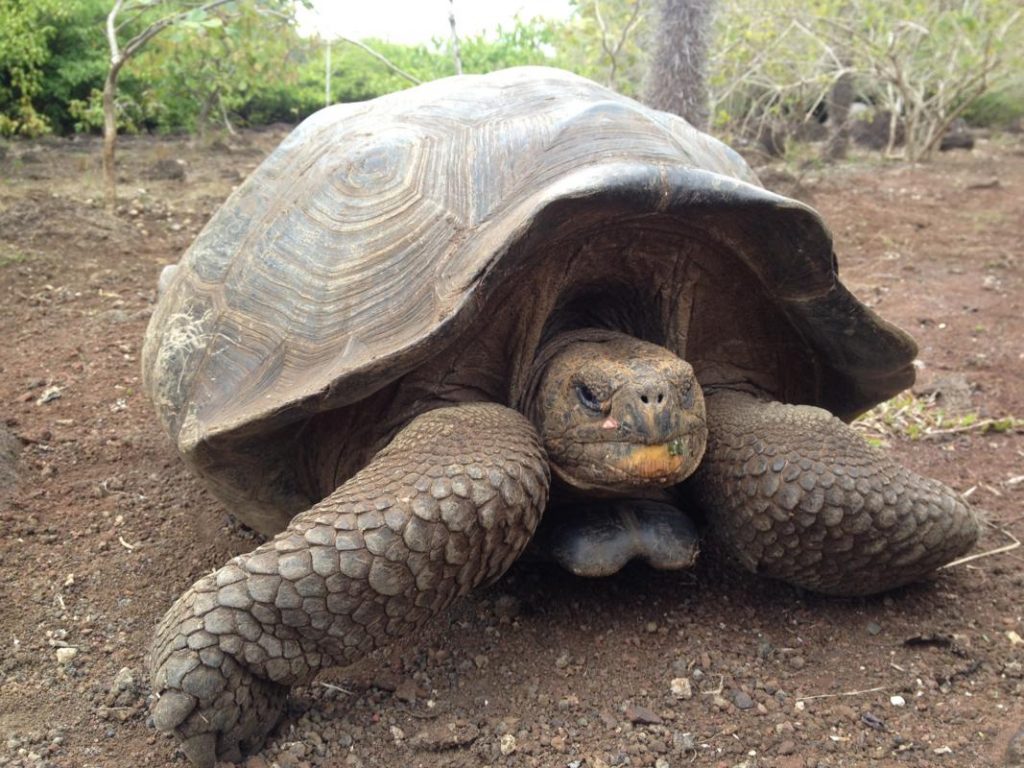 The most famous shell-encased reptile in the Galapagos, however, is the giant tortoise. On the island of San Cristobal, we were shuttled on a national park bus to La Galapaguera, a breeding center for the largest species of tortoise in the world. Walking along a lavarock trail, we saw several of these lumbering land tortoises vegetating in the grass and lots of babies in the “nursery” up the hill. Of the 1,710 tortoises on San Cristobal, 370 reside at La Galapaguera, with an estimated 15,000 in all the Galapagos islands. Thousands were killed for their meat by whalers in the 18th and 19th centuries. (Galapago is an old Spanish word for a saddle similar in shape to a tortoise shell.) The slow-moving giants exist only in the Galapagos and in smaller numbers on a few islands in the Indian Ocean. 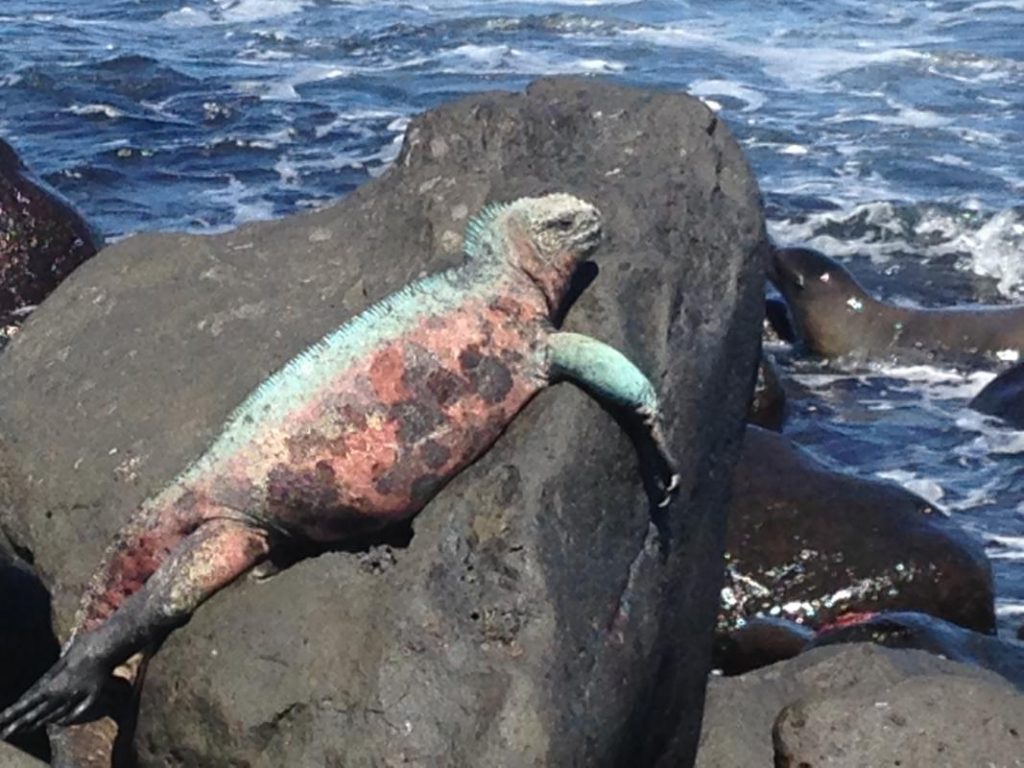 The marine iguana, found only in the Galapagos, can stay underwater up to an hour.

One day we got good looks at several subspecies of Galapagos land iguanas on Santa Fe and South Plazas islands. With spiny backs and a fearsome appearance, these harmless “mini-monsters” are the most prehistoric-looking reptiles in the Galapagos. Mostly drab, though some are a golden yellow, they blend in with the landscape.
We also saw land iguanas on North Seymour Island. But the big attraction there were the frigate 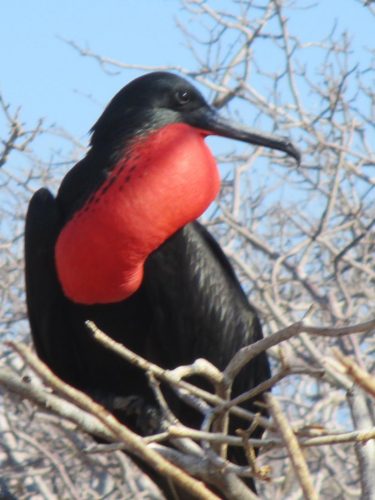 birds perched in the bare trees. These are the seabirds whose males create a spectacle during mating season when they inflate their scarlet chest pouches to the size of a basketball. Though it wasn’t breeding time, we saw some pretty big bulges, which our guide said was just a sign of machismo.
Most days we felt as if we had the islands all to ourselves, though occasionally our gang crossed paths or shared snorkeling sites with other small groups. There were often two or three ships anchored near ours.
Forays ashore were led by Hanzel Marcinetti, an Ecuadorian guide with 27 years’ experience and a walking encyclopedia of everything Galapagos. Each evening at 6:30 the resident of San Cristobal Island would go over the next day’s schedule in the ship’s lounge and give talks about wildlife, sometimes with a PowerPoint presentation. One night he discussed the islands’ human history, covering European explorers, whalers, buccaneers and a certain young Englishman named Charles Darwin, who visited four islands on a scientific expedition in 1835. Darwin’s notes from that trip, detailing differences between plants and animals on islands so close to each other, formed the foundation of his revolutionary theory that all species are always in a slow state of change and evolve to adapt to their physical surroundings. His conclusions, published in the groundbreaking On the Origins of Species (1859), would provide the basis of the modern theory of evolution. 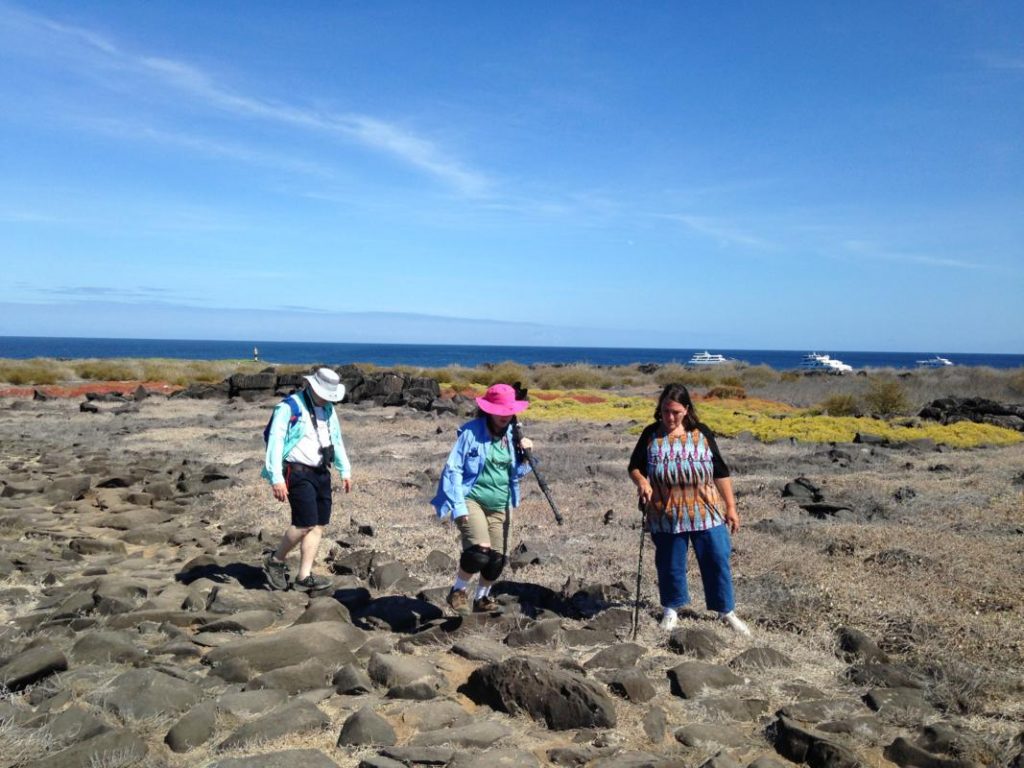 Nature hikes in the islands are leisurely and accommodate all abilities.

We enjoyed getting to know our fellow passengers at the cocktail-hour briefing and buffet-style meals in the adjacent dining area. They came from the U.S., Canada, Britain and Australia. Two Australian ladies were traveling with their 83-year-old father, a real trooper who made every hike, using a cane and getting support at times from crew members. (The Ecuadorian crew of 12 took good care of us all from morning to night, and we were always impressed by the concern the captain and his men showed for our safety in getting us on and off the dinghies.) 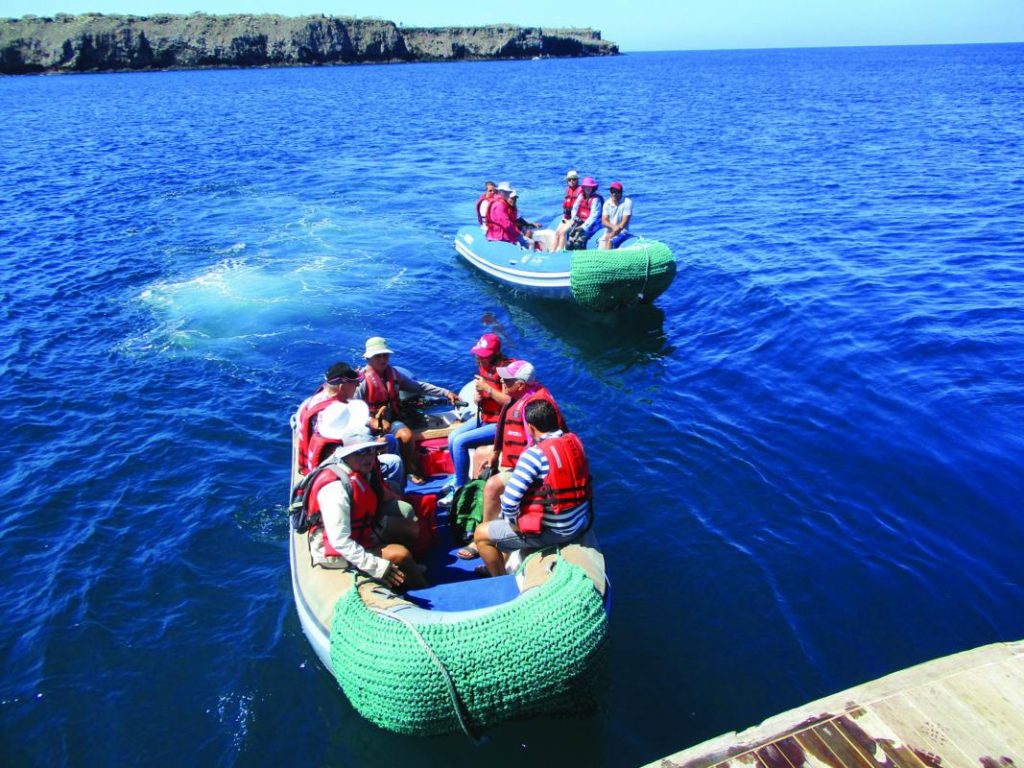 Motorized dinghies shuttle Sea Star Journey passengers to and from the islands.

Over meals, passengers developed a real camaraderie and enjoyed sharing the day’s experiences without the distractions of cell phones and searching for things on the internet (to which there was no access). The wide selection of food was impressive considering there were only 15 of us. Many dishes had Ecuadorian touches. The last lunch featured a whole roast suckling pig, the final dinner a whole turkey. Our favorite meal was an alfresco barbecue dinner in which the whole group gathered on deck for a feast of grilled chicken, steak, tuna and sausage. To cap off the festive evening, sea lions and flying fish put on a show off the stern.
Shipshape by any standard, Latin Trails’ Sea Star Journey (constructed in 2011) was named the Best Boutique Cruise in South America by the World Travel Awards in 2017. Each of the eight generously sized cabins has a large bathroom with lots of counter space and a mirrored wall, air conditioning with individual controls, a mini-refrigerator, closet with safe, couch and two twin beds (or faux queen). Our Galapagos Suite (one of seven) measured 271 square feet, giving us more than enough elbow room. The ship’s largest cabin is the extra-spacious Sea Star Suite at 377 square feet. 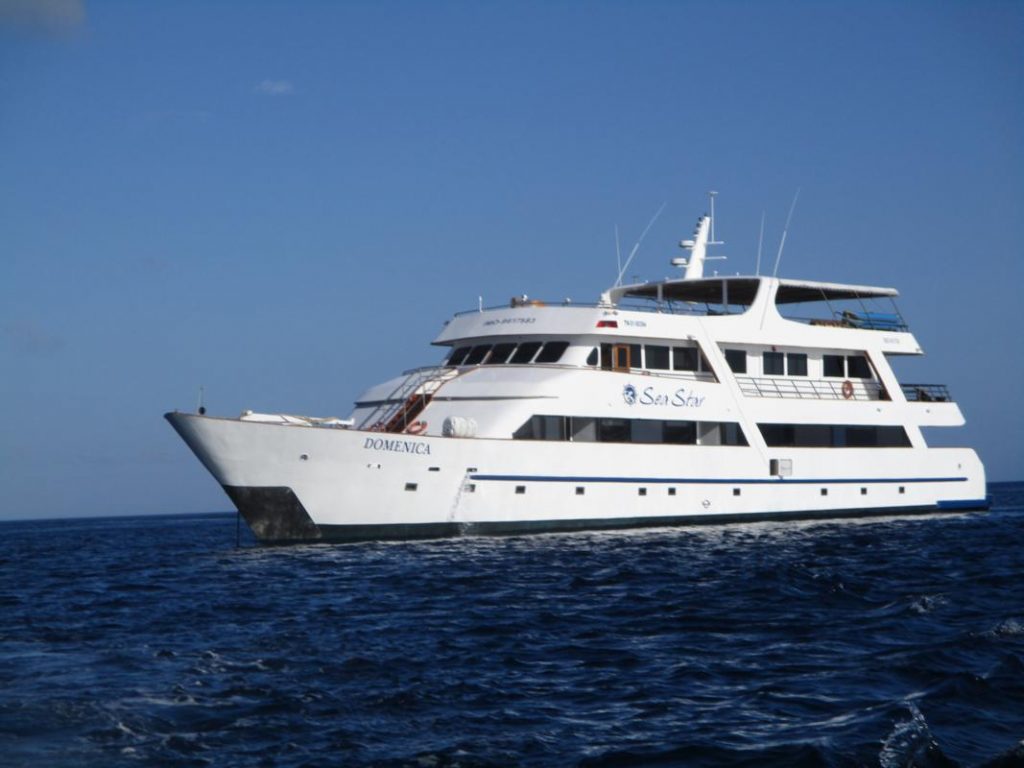 The Sea Star Journey was named the Best Boutique Cruise in South America by the World Travel Awards in 2017.

Up the stairs from our quarters was the partially covered sun deck, appointed with two hot tubs, padded loungers and wicker chairs, and a dryer for wet clothes. The four cabins on the deck below us had small balconies, which were added in last fall’s massive renovation, a project that included new wooden flooring throughout, new showers and sinks in the bathrooms, new furniture and wall decor in the lounge, a redesigned kitchen and updated technology.
Island-hopping in another world while leading the good life on a luxury yacht—a bucket-list dream fulfilled.
For more information on Sea Star Journey cruises in the Galapagos Islands, email Latin Trails at travel@latintrails.com or log on to www.latintrails.com.