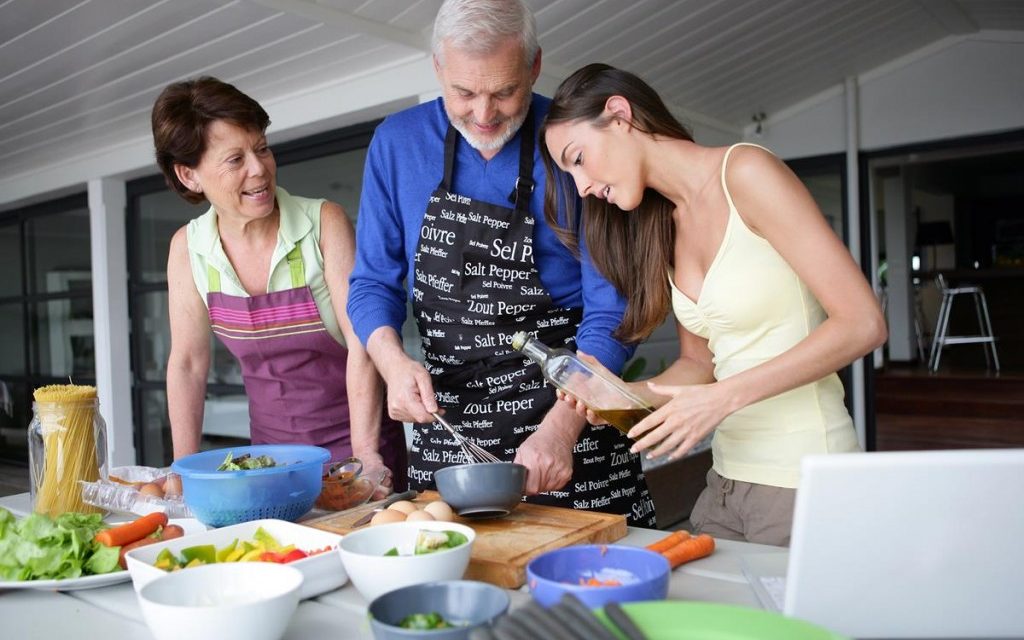 Edible Destinations.com dishes up flavorful forays for travelers open to exploring regional cuisines and dabbling in the culinary arts.

For those passionate about food, especially the Italian table, a week in the Abruzzo region east of Rome would seem to be a little slice of heaven. One day you visit an olive grove, taste the oils and learn how they’re processed. Another day it might be a cheese factory, biscotti-making class or making pasta with a local chef. Seafood sampling on the Adriatic coast, a wine-pairing session, comfortable accommodations in the historic hilltop village of Carunchio….they’re all ingredients of a culinary escape offered by Edible Destinations.com in the rugged foothills of central Italy’s Apennine Mountains.

For serious foodies, those looking to sharpen their kitchen skills, and travelers who just enjoy eating and learning about regional cooking, Edible Destinations.com offers a smorgasbord of appetizing trips, foreign and domestic. Peruse its website, lavishly illustrated with mouth-watering creations, and you can’t help drooling.

The company’s five- to 10-day “Edible Vacations” are escorted overseas tours that include hands-on cooking classes and meals that feature the fruits of your labor. Most of these full-immersion opportunities are in Europe, but other countries include Argentina, Peru, South Africa, Thailand, Costa Rica, Turkey, Morocco and Mexico. Two- and three-night mini-tours, called “Edible Getaways,” take place in North American culinary hotspots.

At the request of a group of 14 women in Kansas City, Loy said Edible Destinations created a Scotch-tasting tour in Scotland and Ireland that included several distilleries. Trips for vegetarians also have been arranged.

“We can create a custom package for a group travel agent, brand it with their branding and name it anything they want,” Loy said. The trip even comes with its own private website.

Edible Destinations, he said, has tended to be “a consumer-driven company,” but to grow the market he wants to reach out and have more involvement with agents and other group planners. The minimum agent commission is 12 percent.

Loy’s ability to make things happen rest on his background in the travel industry, online travel in particular. In the early 1990s he was the executive director of Discover America in Washington, D.C. and from 1996-2000 served as executive director of international travel for Trip.com. In 2003 he launched Groople, a consumer site that offered automated group hotel booking and planning capability, later entering into a partnership with Travelocity whereby his site powered all of its group hotel bookings.

Loy’s passion for cooking sparked the formation in 2006 of Epitourean.com., which offered two- and three-night culinary getaways in the U.S. Then he founded Cooking Vacations.com for international trips. Just over a year ago he merged the two sites to form Edible Vacations.com, which still uses the website with that catchy address—epitourean.com.

As for his interest in food, Loy said, “I got hooked on the food and cooking channels, and I’m the one who does all the cooking in my household…I love to cook and I love to travel.”

What kind of travelers do these trips attract? The vast majority of initial inquiries, Loy said, come from women, but the male-female mix of those who actually travel is much closer, a 60/40 ratio. Often it’s the man on the trip, he added, who is the cook at home.

One doesn’t have to be an accomplished cook to “thoroughly enjoy one of these trips,” Loy said. Everyone can appreciate the special meals and dinner-party atmosphere. Trips, moreover, include free time and historical sightseeing—not every minute is spent in a kitchen or dining room.

Because travelers come with different degrees of cooking acumen, “the chef will take the temperature of the group and measure the level of experience in the kitchen” in fashioning his instruction, Loy said.

The average group size on international trips is 12, but it could be up to 20. As for the age range, he said, “We’ve found the sweet spot is 45-65…on the girlfriend getaways it’s a little bit younger.”

For many travelers, a culinary trip to Italy or elsewhere in Europe is a special way to mark a milestone in their lives, perhaps a 50th birthday or 25th wedding anniversary, Loy said. “A lot of people do the trips as bucket-list items.”

Italy is the No. 1 seller for Edible Destinations, which annually handles about 3,000 passengers in Abruzzo, Tuscany, Umbria, Rome, the Amalfi Coast and other locations. “To many people, Italy and cooking vacations tend to be synonymous,” Loy remarked. The next most popular countries are Greece, Spain and France.

On the menu of international trips listed on the website, there are no set departure dates because a package can be arranged practically any time the client wants to go. If a group wants to go to Abruzzo from late March to early November, for example, securing accommodations in Carunchio is no problem, as Edible Destinations buys out all the inventory from the Palazzo Tour d’Eau, a historic luxury residence perched on the highest point in town. The published price of the six-night Abruzzo program is $3,498 per person, double occupancy, plus taxes and airfare.

Another six-night program based in one European city is “A Showcase of Spanish Cuisine in Madrid.” In three cooking classes, guests learn how to make such dishes as paella Valenciana, gazpacho and arroz con leche (rice pudding). Tasting tours focus on sweets, tapas, and wine and brandy.

Food-focused vacations may not be every group’s cup of latte, but for the right audience, these specialty tours hit the spot. Invite your groups to broaden their palates, pack their appetites and dig in.

For more information on Edible Destinations.com, call 800-390-3292 or visit epitourean.com.