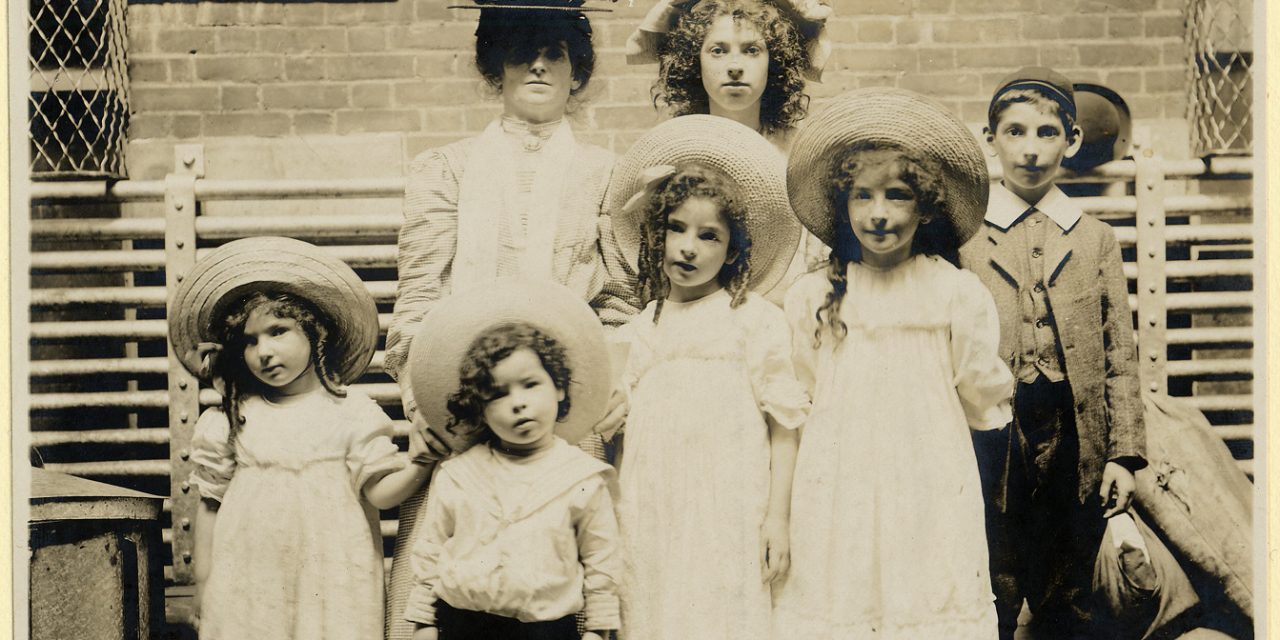 Anyone who sails into New York Harbor on a tour boat has to be inspired by the sight of the Statue of Liberty, that majestic beacon of freedom with her torch held high. It’s a moving experience, indeed.

But imagine arriving on a transatlantic steamship after a long, uncomfortable voyage as a poor immigrant from Poland or Italy at the turn of the 20th century. Filled with the hopes and fears of starting a new life in a new land, you’re overcome with emotion, awed not only by the promise of Lady Liberty but by a skyline unlike anything you’ve ever seen.

On a visit to the Ellis Island National Museum of Immigration, one of New York City’s top tourist attractions, leisure travelers today get a good sense of what newcomers encountered. Located on a tiny island originally used for harbor defense, the museum occupies the very building that served as the U.S. point of entry for millions, a 1900 brick structure capped with four towers and trimmed in limestone and granite. 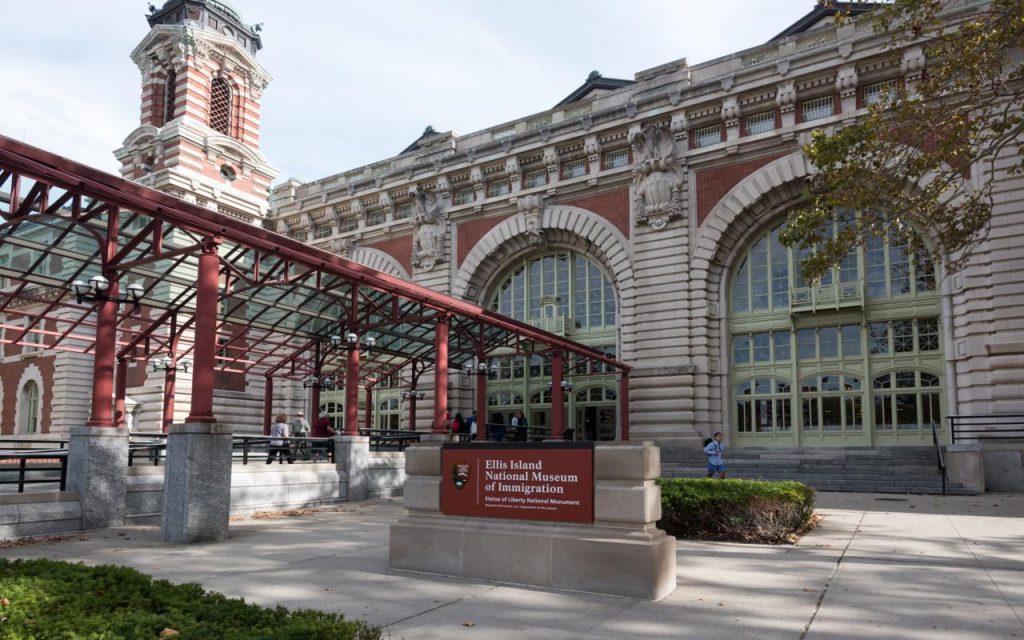 The historic site is accessible by ferries operated by Statue Cruises. Your ferry ticket ($18) includes roundtrip transportation and museum admission. Departing from Battery Park in Lower Manhattan, the boat first stops at Liberty Island (a 20-minute trip) and continues on to Ellis Island, five minutes away. Statue Cruises also offers service to the islands from Liberty State Park in Jersey City, New Jersey. 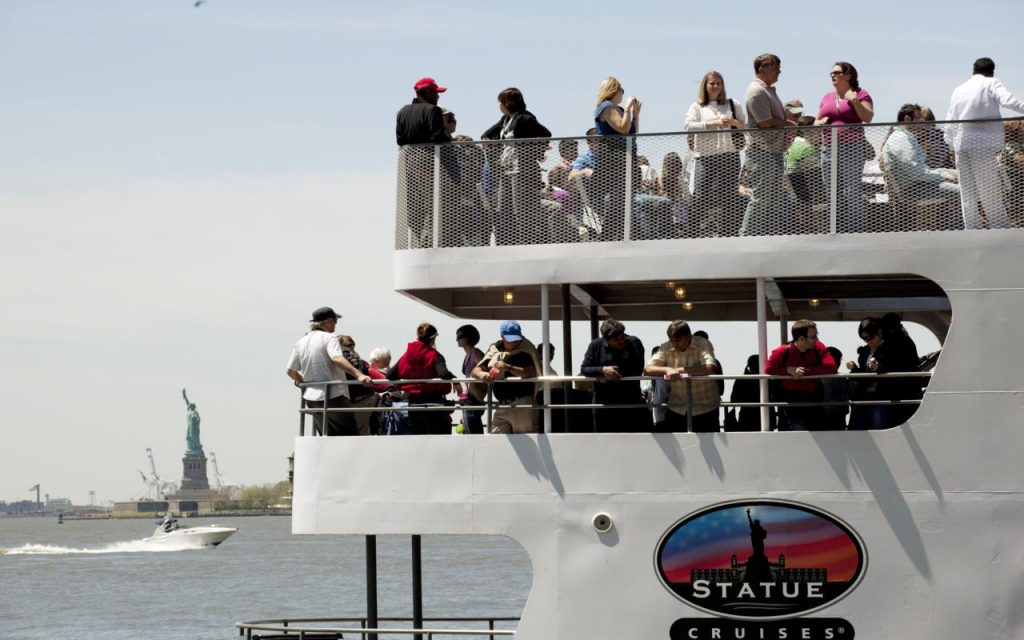 Many of us have a deep personal connection to Ellis Island. In fact, 40 percent of Americans can count at least one ancestor who passed through there. Between 1892 and 1954 federal inspectors processed more than 12 million immigrants, mostly Europeans, in what’s been called the largest migration in human history. During the peak of the immigration years—before national quotas were set in the 1920s—the two biggest groups were Italians and Eastern European Jews. After the inspection process was transferred to U.S. consulates in the ’20s, only a small number of detained immigrants went through Ellis Island until it closed.

Looking for a better life in America, many immigrants were escaping poverty, unemployment, political strife, and religious and ethnic persecution in their homelands. Others came for the lure of adventure, perhaps with dreams of making a fortune. With immigration a hot political issue today, the story of Ellis Island is more timely than ever. 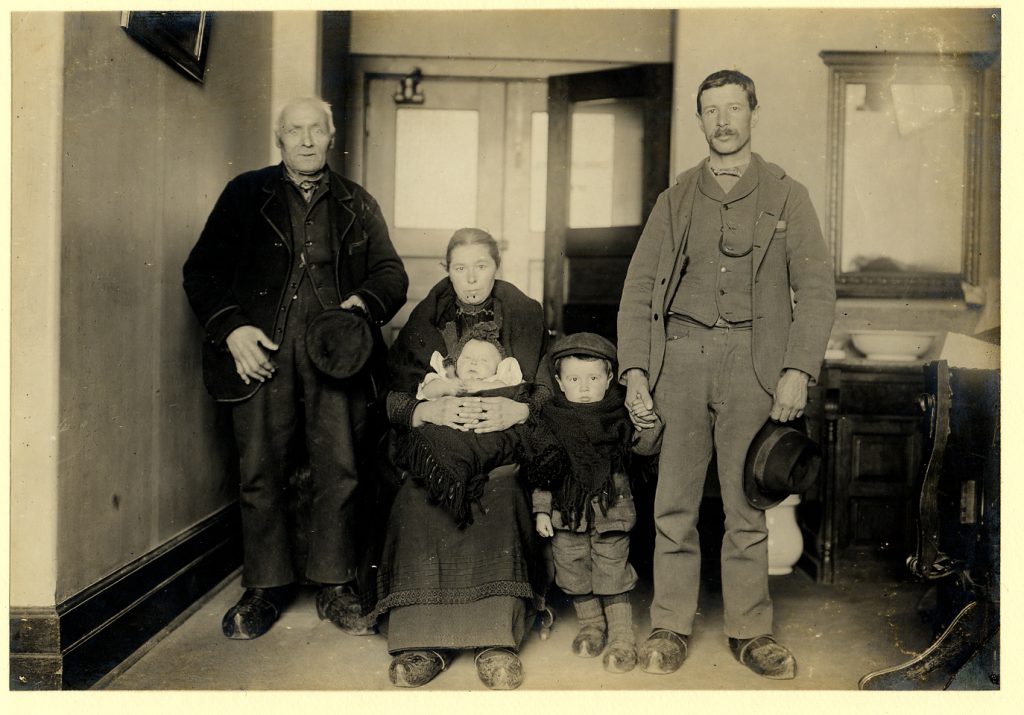 Only passengers booked in steerage (third class) had to go to Ellis Island, traveling there from the steamship on crowded ferries and barges. Those in first and second class got permission to land as soon as they got off the ship.

For museum visitors, immigrants’ tales come to life in three floors of vibrant exhibit galleries with artifacts, listening stations, enlarged blocks of text and oversized, black-and-white photos. Free handheld audio devices include eyewitness accounts from immigrants and richer detail than exhibit signage can provide. Two theaters show the 30-minute documentary film “Island of Hope, Island of Tears,” a poignant production that focuses on new arrivals’ dreams for a better future in a strange land and the great anxiety they had over passing through the gauntlet at Ellis Island. Filled with archival footage and immigrant interviews, it’s worth the time and really sets the stage for your visit.

If your time is limited, go directly to the second floor, climbing the same stairs immigrants did when they approached the cavernous Registry Room (or Great Hall) with its white tile-vaulted ceiling. Off the hall, in the section called “Through America’s Gate,” you follow in their footsteps in the actual rooms where they underwent examinations and interrogations. Inspectors did their best to weed out those who had medical or mental problems, criminal histories, anarchist leanings, and those “likely to become public charges” (unable to earn a living). The majority of immigrants got through in less than a day, but 20 percent were detained for further medical or legal examination and were housed in Ellis Island hospitals or dormitories; only about two percent were denied entry and sent back home at the steamship company’s expense. You see the restored hearing room where detainees could plead their case to the Board of Special Inquiry. 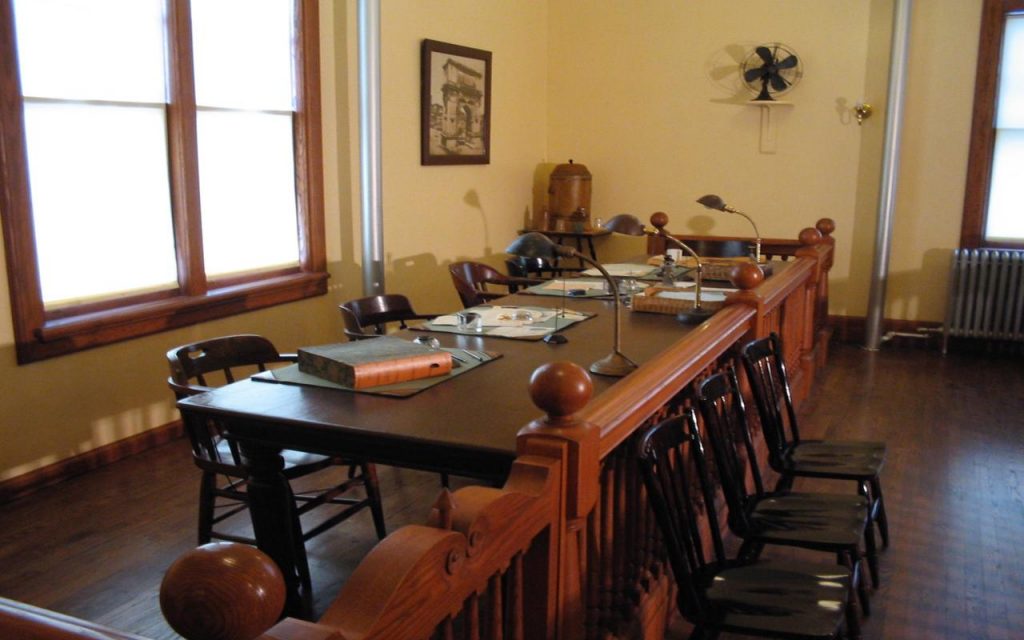 Especially intriguing are the exhibits on health inspections, in which doctors examined people for everything from anemia to varicose veins. Of special interest are the photos and audio tour accounts of the feared “eye men,” doctors who were looking for anyone with trachoma, a highly contagious eye disease that can lead to blindness, a common ailment at the time in southeastern Europe. Photos show the “eye men” rolling up patients’ eyelids with button hooks, a cringe-worthy sight. Having trachoma was a sure way of being deported.

A U.S. Public Health Service physician who worked at Ellis Island from 1919-1922 is quoted saying that it was a place of “great happiness and great sorrow.” Seeing families reunite after being apart for many years “was marvelous,” he said. “Unfortunately, times did occur when a family had to be separated because of deportation or death. Then you wished you were somewhere else.”

To assess new arrivals’ mental faculties, inspectors used standard intelligence tests and ones they developed themselves. Relating her experience with questioners, a Polish Jewish immigrant who arrived in 1917 recalls in a recorded 1985 interview: “They asked us ‘How much is two and one? How much is two and two?’ But the next young girl, also from our city, went and they asked her, ‘How do you wash stairs, from the top or from the bottom?’ She says, “I don’t go to America to wash stairs.”

The food service exhibit spotlights the private restaurant concession, which served three meals a day in the Ellis Island dining room. The costs were charged to the steamship companies, which were required by law to provide food for former passengers who had been detained. Meals were plain but wholesome. An exhibit description notes, “Though boiled beef, stewed prunes and baked beans were the restaurant’s staples, many immigrants also remember eating American favorites such as ice cream, bananas and white bread.” 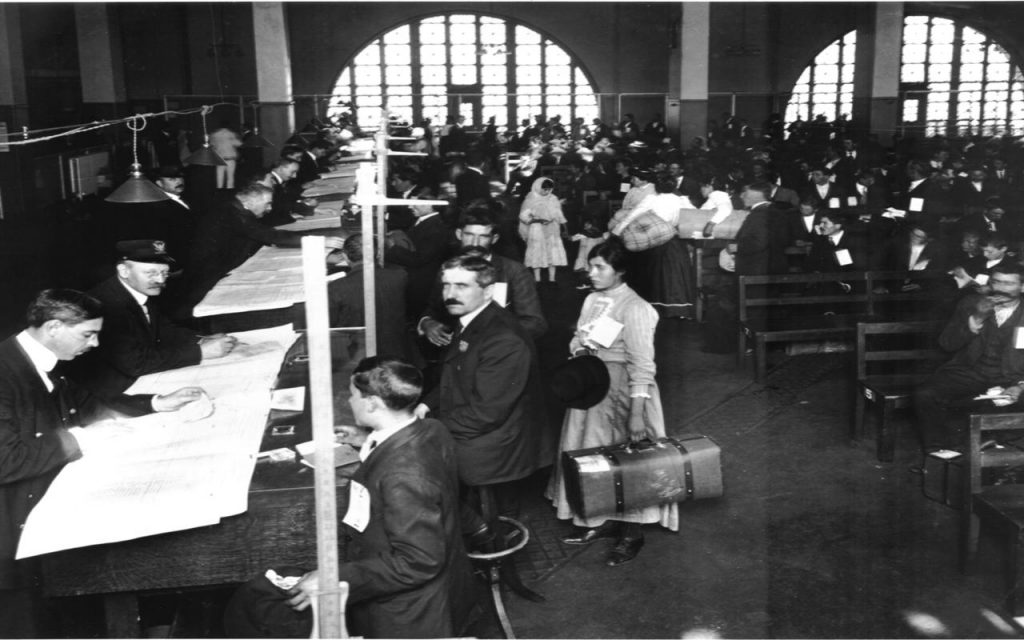 The second floor’s “Peak Immigration Years” galleries explore the massive wave of newcomers that entered the U.S. between 1880 and 1924. It explains why people left their homelands, how they adapted to American life and the importance of learning English. Photos show immigrants as shopkeepers, peddlers and push cart vendors. They’re seen in industrial settings such as a Detroit brewery, Pittsburgh steel mill and the Chicago stockyards, and in neighborhoods like New York’s Little Italy and San Francisco’s Chinatown. Songwriters and playwrights, some of them children of immigrants, lampooned ethnic ways through stereotypes that would be considered insensitive today. A display of sheet music includes songs like “Macaroni Joe” and “I’m Going Back to the Land of Spaghetti.”

On the third floor, “Treasures from Home” exhibits showcase items brought from the Old World. On display are folk costumes, wedding dresses, Bibles, toys and home furnishings donated by immigrants or their families. “Silent Voices” depicts an abandoned Ellis Island and how the buildings deteriorated after the immigration station shut its doors. The site was restored in the 1980s and the museum opened in 1990. 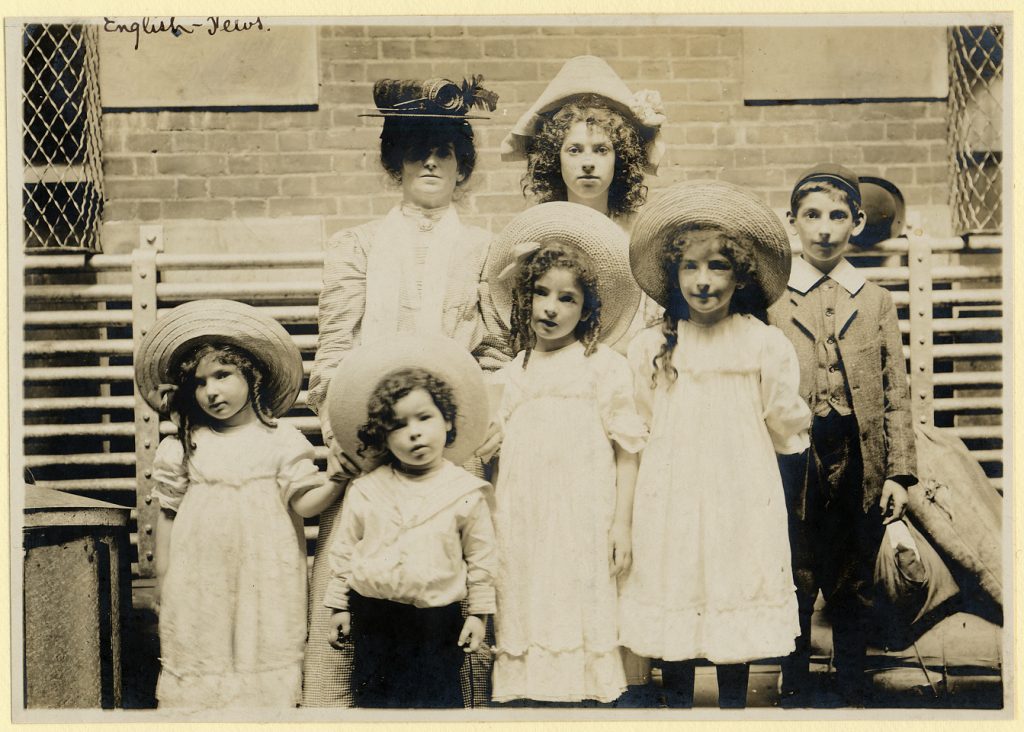 Exhibits on the recently renovated first floor tell the general history of immigration to the United States. At the American Family Immigration History Center, you can look up your ancestors (for a fee) in the computerized database of ships’ manifests.

National Park Service rangers give 30-minute guided tours of the museum. Hard hat tours of the island’s unrestored hospital buildings, contagious diseases wards, morgue, housing and maintenance facilities are available for those who book in advance.

Ellis Island is part of Statue of Liberty National Monument. For information, visit www.nps.gov/elis and www.statuecruises.com.