Eating Your Way Through St. Louis

Dining, snacking and grazing have always been highlights of my trips. Lately, though, sampling distinctive regional food and drink has become an absolute passion of mine.

Take my recent trip to St. Louis, for instance. I worked up an itinerary focusing on the culinary scene. My three-day mission to find favorite St. Louis foods and restaurants took me to neighborhoods throughout the city. Unfortunately, there are not enough meal and snack times in a day—or a month—to fully sample the gastronomical bounty. 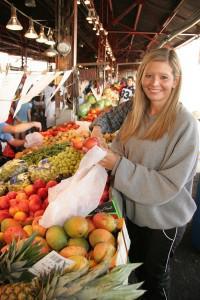 Travelers seeking local color and palate-pleasing delights find happiness in Soulard Farmers Market, my starting point on a Saturday morning. Located in the historic Soulard neighborhood south of downtown, it’s a delicious slice of St. Louis life. In the aging, two-block-long building under a roof supported by iron girders, vendors in nearly 150 stalls hawk fruit, vegetables, flowers and artisan breads. “Watermelons $3, two for five bucks….crate of okra $5….honey fresh from the honeycomb,” they cry out.

You’ll be mesmerized by gourmet cupcakes, just-picked peaches and apples, giant carrots and zucchinis, piles of cherries and sweet potatoes. Be on the lookout for free samples of cantaloupe, peaches, or fresh-baked bread and pastries. And don’t forget to pick up a bag of hot cinnamon-sugar mini-donuts, fresh from a bath in oil. I had the little donuts for breakfast, plus pancake-and-sausage-on-a-stick with a cup of syrup for dipping.

At the Soulard Bakery window I couldn’t resist a slice of gooey butter cake, an excellent rendition of this St. Louis specialty with a pudding-like filling and crispy edges. One snack shop sells pretzel brats and hot dogs from Gus’ Pretzels, a St. Louis favorite since 1920. The soft pretzel sticks resemble oversized cigars. Gus’ store is not far away, just a few blocks from Anheuser-Busch Brewery.

Most stalls at Soulard Market are open-air, but some, like the bakery and meat market, are indoors. Among the more exotic meat offerings are buffalo brats, burgers and jerky, cherry sausage and alligator-on-a-stick.

Market entertainment might include a country singer playing for tips or a folk group with fiddle, guitar and banjo players. In the grassy area next to the building are tents with hand-crafted jewelry, tie-dyed clothing and other apparel.

Soulard Farmers Market, open from Wednesday through Saturday, is a great place for photos and meeting locals. Leave some time to explore the adjacent neighborhood, St. Louis’ oldest, with its churches, brick sidewalks and vintage row houses.

The Cherokee neighborhood, next door to Soulard, is another area with a history cast in red brick. It’s fun to prowl the six-block stretch of Cherokee Street known as Antique Row. I spent a leisurely hour poking into antique shops and then had lunch at the Mud House, a high-ceilinged coffeehouse that offers a quiche of the day and Nutella-and-banana crepes. 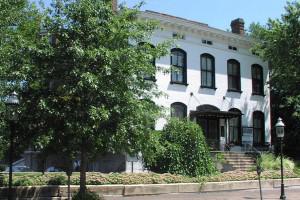 Also in Cherokee are the Lemp and DeMenil mansions, 19th century homes a few doors apart on DeMenil Place. The Lemp, open for lunch and dinner, offers murder mystery dinners for groups. The Demenil’s Carriage House Cafe is open for lunch and group events.

Whatever your mood, appetite or budget, the Loop neighborhood abounds with mealtime choices. Just take a stroll down Delmar Boulevard and you’ll find everything from Ethiopian and Middle Eastern to Mexican and down-home American. At Thai Pizza Co., I had a light dinner of thin-crust chicken satay pizza, an exotic treat marinated with tumeric and coconut milk. (Other choices included green, red and yellow curry pizza.) I was saving room for a root beer float down the street at Fitz’s, makers of St. Louis’ premium root beer.

Also on Delmar is a location of Pi Pizzeria, famed for its organic ingredients and cornmeal crust. President Barack Obama discovered this place during the 2008 presidential campaign and later invited the owners to prepare some of their pizza at the White House. You’ll see a framed photo of the owners posing with Obama. Street signs on this block declare “Barack Obama Boulevard,” an honorary designation. 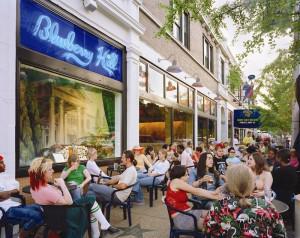 If you like macaroni and cheese—and who doesn’t—try some different takes on this all-American classic at Cheese-ology, a rather Spartan establishment on Delmar. The Black & Bleu combines bleu cheese with Cajun spices.

A lunar theme flavors Eclipse in the Moonrise Hotel, a two-year-old Loop landmark recognizable by the lighted, revolving moon on its rooftop. Setting the mood in the quirky but sophisticated restaurant are rocket ship models, toy space guns, astronaut figurines and various moon-themed bric-a-brac. One breakfast item is Houston, We Have a Sandwich, which consists of crisp pancetta, two fried eggs and Swiss cheese on a brioche bun. The Twenty Dollar Burger is eight ounces of ground chuck with shaved prosciutto, fried eggs, field greens and foie gras butter on a brioche bun, plus fries. Enjoy a warm summer’s night on the Rooftop Terrace Bar, which offers great views of the moon, both the real one and the signpost version.

Turndown service at the Moonrise Hotel includes a mini-Moon Pie. Silver track lighting and a big swivel “moon” lamp lent a celestial tone to my room, the Betty Grable Suite. Framed photos of Grable, Hollywood’s top box office star in 1943, pay homage to the pin-up legend, whose swimsuit poster was a prized possession of one in every five U.S. servicemen at the time.

The retro look carries over to the nearby Pin-Up Bowl, a hip, eight-lane bowling alley created by Joe Edwards, the owner of Blueberry Hill, the Moonrise Hotel and two of the street’s entertainment magnets—The Pageant concert nightclub and Tivoli Theatre, an art movie house. Decorated with magazine pin-up girls from the 1940s, the neon-lit, Art Deco-style bowling establishment serves Campbell’s soups, freshly baked pizzas and Pop-Tarts.

Embedded in the sidewalks on Delmar are brass stars saluting famous St. Louisans along with plaques summarizing their achievements and connection to the city. Among the honorees are Chuck Berry, Tina Turner, Maya Angelou, Betty Grable, Bob Costas, Stan Musial and Charles Lindbergh.

If you’re looking for Italian food and flair, you’ll find it in The Hill, another distinctive neighborhood. Loaded with fine restaurants, this ethnic enclave is the place to sample one of St. Louis’ signature foods—toasted ravioli. Found in the appetizer listings of menus throughout the city, these breaded, deep-fried pillows filled with beef or veal are dusted with grated Parmesan cheese and served with marinara sauce.

The Hill, a 50-square-block area of South St. Louis, invites curiosity-seekers to shop for ethnic specialties and walk down streets lined with well-kept houses and neat-as-a-pin yards. Baseball greats Yogi Berra and Joe Garagiola both grew up in the neighborhood, which has retained its tightly woven character over the years.

Lightpole banners and fire hydrants are emblazoned in red, white and green, colors of the Italian flag. It’s fun popping into Italian bakeries, delis and grocery stores. In one store I sipped samples of The Sopranos wine. In the garden of a tavern I spied men playing the Italian bowling game of bocce.

I saved my appetite for a dinner at Charlie Gitto’s, where pasta entrée choices range from tortellini and manicotti to six-layer lasagna and baked spaghetti with meatballs. I chose the rigatoni with sweet and hot Italian sausage in a fresh tomato sauce. Meat entrees include chicken spiedini, skewered and char-grilled; chicken or veal saltimbocca, with prosciutto and fontina cheese in a white wine lemon sauce; and classics like veal Parmesan and shrimp scampi.

Crown Candy Kitchen has been a St. Louis tradition since 1913. Located on the edge of the downtown, it’s an old-fashioned soda fountain famous for its giant sundaes, 24-ounce malts and homemade chocolate candy. (Anyone who can drink five malts in 30 minutes gets them free.) The ice cream, 14 percent butterfat, is blended right in the shop in an antique copper candy kettle.

You can also order sandwiches, salads and chili at Crown Candy Kitchen. A jukebox and Coca-Cola memorabilia set the tone at this nostalgia-filled favorite run by the third generation of a family whose grandfather brought his confectionery skills from Greece.

Ted Drewes Frozen Custard is yet another St. Louis institution. A Route 66 landmark since 1931, it’s best known for its concretes—milkshakes that are so thick that they hand them to you upside down. The rich vanilla custard is blended with a variety of cookies, candies, fruits and nuts. I tried the Elvis Presley, a mixture of banana and peanut butter (one of his favorite sandwiches). On summer nights the multiple lines are 20 deep but go surprisingly fast.

Whether you’re a serious foodie or just want to pig out, St. Louis sets the table for hungry travelers searching for one-of-a-kind taste treats.