Considering that the central part of Dresden was almost completely leveled by bombs in World War II, you’d think this German city of half a million people would still be recovering. And while its Old Town is rebuilding even today, Dresden is a magnificent architectural wonder that will leave you wondering why you haven’t visited earlier.

Spacious plazas, gilded palace domes, inviting water fountains and parks, vibrant nightlife, museums, cathedrals and a romantic river are high points of this city, once part of the German Democratic Republic, or East Germany. Dresden has a worldwide reputation for art and culture. 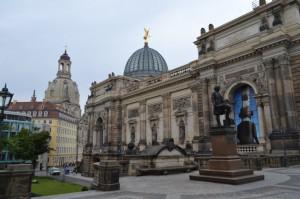 Sometimes called the “Florence on the Elbe,” Dresden welcomes groups, and it can handle them with good transportation, a number of good hotels and a tourist-friendly atmosphere.

Let’s begin in the center of the city. As long as you can see the Frauenkirche on Neumarkt, you won’t get lost. The Church of Our Lady is Germany’s most important Protestant church, erected between 1726 and 1743. Its characteristic dome, called the “stone bell” owing to its shape, collapsed in February of 1945 after the Allied bomb raids.

To look at the completely restored sandstone church today, and understanding the gargantuan rebuilding task, would make a believer out of anyone. Rebuilding began in 1994 and was completed 11 years later with the use of 500,000 stones, including new and reused ones, at a cost of some 131 million euros, 65% of which came from donations.

All around the Neumarkt area, a wide plaza, you’ll see new buildings based on old designs, some of them still being erected. A nearby church, the Kreuzkirche, home of the Kreuzchor boys choir (with a 700-year-old tradition), is just steps away from the Rathaus (Town Hall).

Continuing to the right, you’ll come to the Albertinum, which houses several world-class museums. This terrace, also known as “Europe’s Balcony” and originally designed to be a private garden for Saxon Prime Minister Count Bruhl, is a place that you’ll want to come back to again and again during your visit. It’s a visual treat, day or night.

Continue down the Terrasse toward the Theaterplatz, passing monuments to the likes of Johann Friedrich Bottger, inventor of European porcelain, and master builder Gottfried Semper. You’ll have a great view of the Elbe and its well-revered paddlewheel steamers that celebrate their 175th anniversary this year. Across the river see gold domes of the Ministry of Finance and the Saxony state government buildings.

Situated at the Augustus Bridge is the Catholic Hofkirche built between 1738 and 1755, with its exterior featuring a combination of Roman and German Baroque architecture. Inside is a case containing the heart of Augustus the Strong, a powerful emperor during the 1700s.

The yellow, Neo-Baroque building near the church was once the palace of the second-born princes and adjunct to the Hofkirche is the Royal Palace, which is adorned with a host of towers. Today, parts of it are being remodeled for the State Art Collections, but you can visit the Green Vault and the Cabinet of Prints and Drawings.

The Green Vault’s nine spectacular rooms are a must; as many as 4,000 objects are displayed, including tankards, goblets, and items in gold, silver, ivory, ebony, jasper, amber and bronze. The collection, started in 1560, was the brainchild of Prince Elector Augustus I and includes a miniature Indian mogul ruler’s court with 130 golden figures and studded with 5,000 diamonds. Audio guides are available in several languages, and timed-entry tickets should be reserved well in advance.

Other important buildings are the Semper Opera House, best appreciated as part of a guided tour; the Baroque Zwinger Palace, the most important Dresden structure with pavilions, galleries and courtyards; and the Furstenzug, a 394-foot-long mural made of 24,000 Meissen tiles depicting Saxony rulers between 1123 and 1904.

After a day of taking in the sights, be sure to leave time for the many shops around Neumarkt Plaza and in the New Town area across the river. 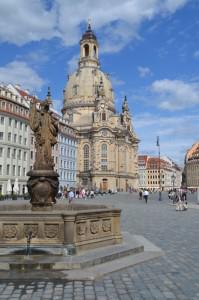 You’ll find a number of Dresden shops that sell finely handcrafted wooden Christmas decorations and toys made in the nearby Erzgeberge area. Try Traditions & Form at Landhausstrasse 6 (in the British Hotel), where owner Mario Somplatzki will offer you a big smile and answer questions about his plentiful stock.

You’ll work up a good appetite from all your walking, so check out the numerous restaurants and pubs in Dresden. You can sit down and relax for coffee, beer or wine, elegant ice cream concoctions or a hearty meal. The restaurants, with their large outdoor umbrellas, cater to the thousands of tourists who descend on the city daily. You’ll not go hungry in Dresden, but the words “to go” don’t have much meaning here (as in all of Germany), so be prepared to take your time. Once you sit down at a table, it’s often yours for as long as you’d like to be there. Try Saxon treats such as the Sauerbraten, potato soup or tasty Quarkkeulchen (curd-shaped like drumsticks).

Nightlife is abundant, from operas to plays, to concerts to dining and drinking (Germans consume more beer than any other people), and just listening to the wonderful street musicians in the narrow passageways around the city. One evening I listened to a young man and woman sing opera for 20 minutes outside the Opera House, and I gladly gave them a couple of euros for their electrifying performance. They received a rousing applause from those gathered. An inexpensive way to enjoy the setting sun by the riverfront is to purchase a wurst and a beer from a street vendor on the Terrasse and watch the people go by. 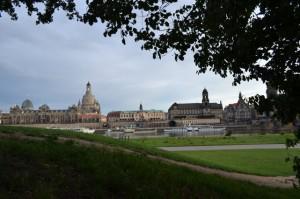 Old Town Dresden from across the Elbe River.

There are many other highlights of a trip to the area, such as visiting the unique castles and wineries, riding the Lossnitzgrund steam railway from Radebuel Ost to St. Moritzburg Castle, visiting the Radeburger Brewery for a tour, floating down the Elbe on a Saxon Steamship Company paddlewheel steamer for a sunset cruise, or going during Advent for the famous Striezelmarkt (Christmas Market), where Dresden’s famous delicious stollen is served.

From Baroque to avant garde, Dresden has come a long way in the last 65 years. The Florence on the Elbe is worthy of a place on your itinerary.