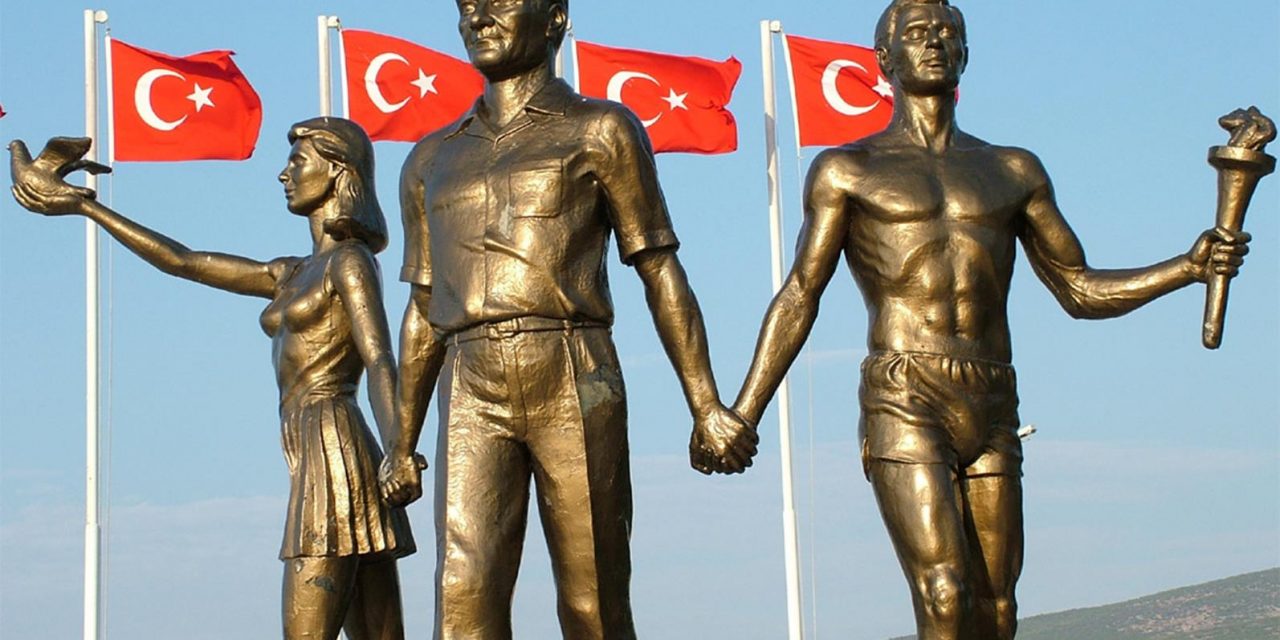 Though the Aegean resort town of Kusadasi is well known among sun-seeking European travelers, most Americans are not familiar with it unless they have been there for the day on an Eastern Mediterranean cruise. A popular port of call on cruise itineraries out of Athens and Istanbul, Kusadasi is just a half hour’s drive from the ancient Roman ruins at Ephesus, one of the most impressive archaeological sites in the world.

I had been to Kusadasi on two cruises but recently had the luxury of getting to know the place better when my son Jeremy and I spent a week in Turkey, dividing our time between Kusadasi, Istanbul and the Cappadocia region.

We couldn’t have chosen a better hotel for ambiance, location and price. For anyone thinking of a land vacation in western Turkey, I recommend Mr. Happy’s Liman Hotel, a six-story, budget hostelry directly across the street from the cruise port. Our balcony room (about $140 for three nights including bountiful breakfasts at the rooftop restaurant) provided sweeping views of the harbor and coastline. Mr. Happy (proprietor Hasan Degirmenci), a jolly soul, arranged an Ephesus tour for us, not to mention the transfers from and back to the airport at Izmir, an hour away. The shuttle bus driver was there waiting for us after our Turkish Airlines flight from Istanbul had landed in Izmir. 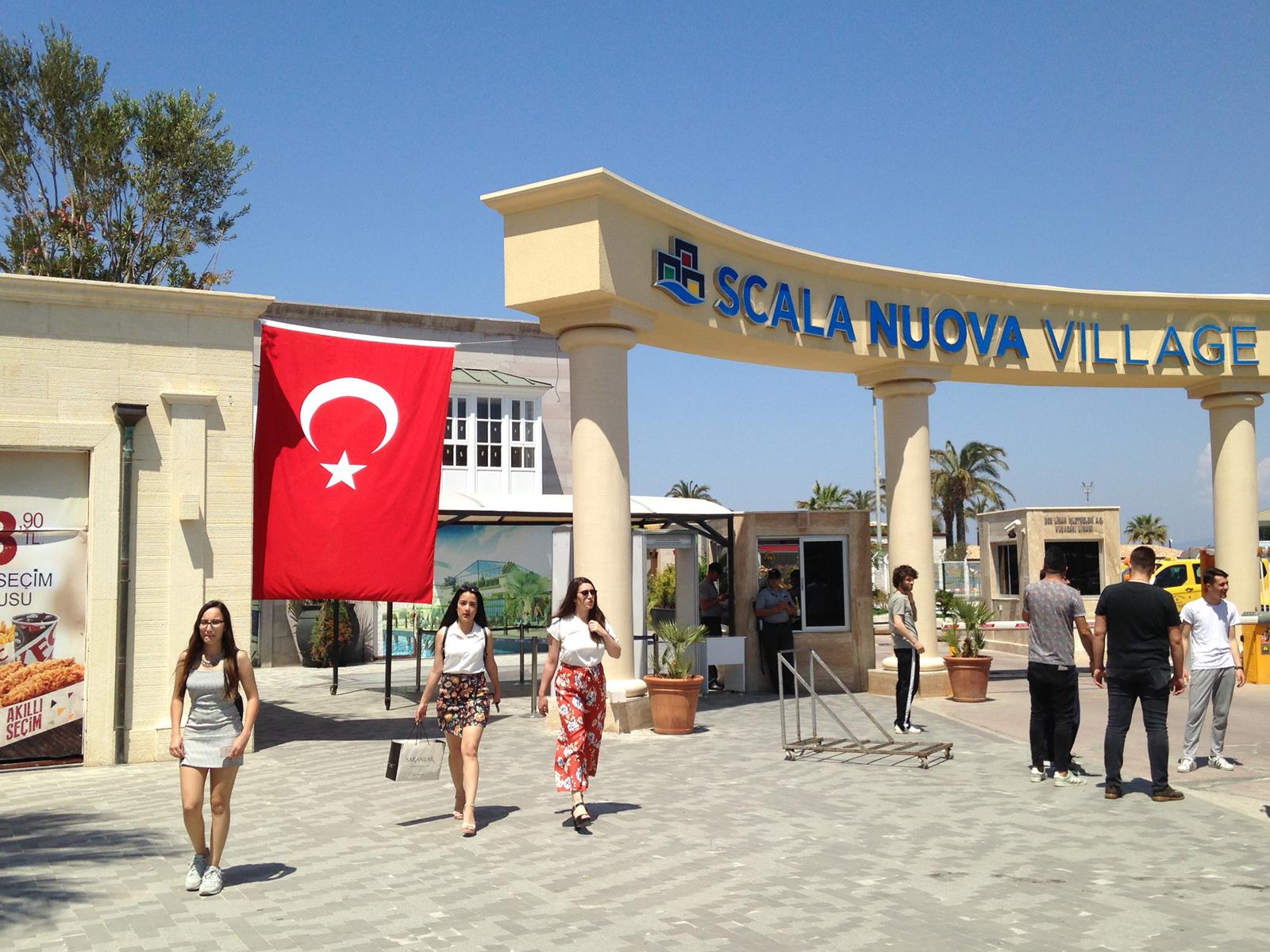 Clean and well cared for, Mr. Happy’s is praised in Lonely Planet, Rough Guides, Fodor’s and other guidebooks. Ottoman-style rugs, cushions and other decorations give the public areas lots of local flavor. Best of all, most points of interest in town—and lots of shops and restaurants—were a short walk away.

A picturesque offshore island rimmed by the ramparts of what locals call the “pirate castle” was our first destination in Kusadasi. Lapped by azure Aegean waters, the iconic chunk of real estate (Pigeon Island) is a five-minute jaunt from the port via a waterside promenade and pedestrian causeway.

After passing through the castle gate, visitors can go inside the tower or follow the path along the stone walls, enjoying views of the shoreline, cruise ships and other watercraft in the bay. Once used for defense, Guvercinada (“Dove” or ‘Pigeon”) Castle dates from the 1500s; its walls are 19th century creations. The island’s park-like setting features tree and plant specimens—pine, cypress, olive, fig, oleander—with descriptive labels in Turkish and English, display panels on the area’s flora, fauna and history, and a large aviary with peacocks. (The word Kusadasi means “bird island” in Turkish.) 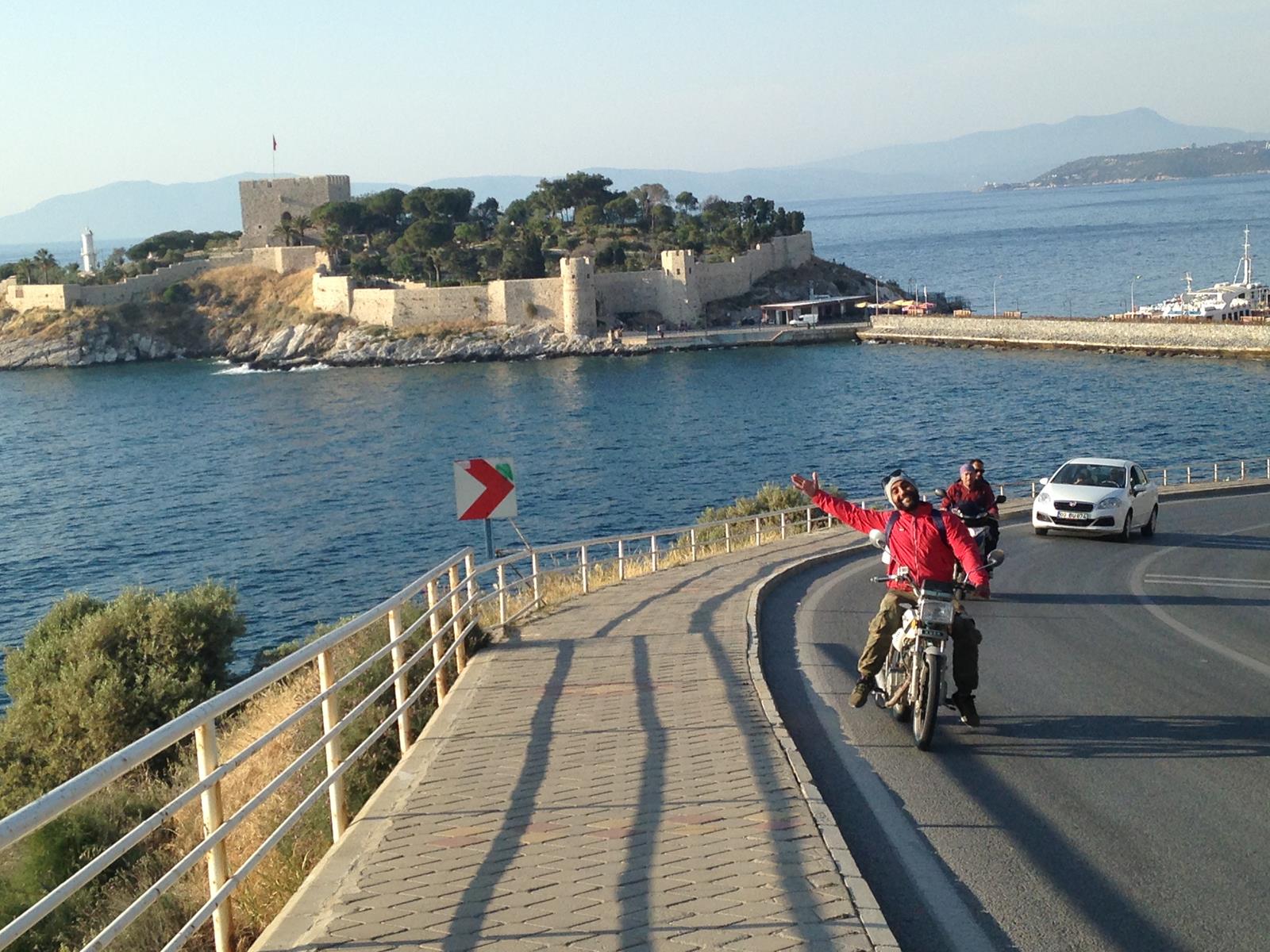 The coastal road in Kusadasi, Turkey, affords views of the iconic castle on Pigeon Island and the Aegean Sea. (Randy Mink Photo)

Before heading to other parts of town, take a break at the cafe just outside the fortress. Tourists are intrigued by the stray cats lurking around the cafe tables and looking for morsels of shrimp by the fishing and excursion boats lining the causeway. A one-hour bay cruise (only $1.25) affords panoramas of Kusadasi (pronounced “Koosh-a-DAH-suh”), a sprawling jumble of white, beige and pale-pink buildings tucked between green hillsides and blue ocean. A “Kusadasi” sign in giant white letters adorns one slope, and above it looms a golden statue of the revered Mustafa Kemal Ataturk, the Republic of Turkey’s founder and its first president (from 1923 until his death in 1938). North and south of town are beachfront hotels. Day-long boat cruises visit three isolated beaches.

For lunch, you might want to dine in Scala Nuova Village, the tidy port complex that traces its Italian name back to the 15th century, when the Venetians and Genoese dominated commerce in the region. Restaurants, all with waterside patios, include an upscale seafood place, Mangal Burger (for sandwiches) and KFC (with rooftop and ground-level seating). There’s also a Starbucks.

The local tourist office, directly opposite the port entrance, can provide a walking-tour map of Kusadasi’s Old Town, which lies just steps away. Everyone stops to pose at the photogenic Caravanserai, a classic Ottoman-style castle, and then poke around its courtyard. A vertical Ataturk banner flanked by Turkish national flags, their blazing red fields accented with a white crescent, hangs from the Caravanserai’s imposing facade. Once a way station for camel caravans, the 16th century Caravanserai stands across from the fishermen’s harbor and a bevy of restaurants serving fresh catches of the day. Other Old Town landmarks include historic Kaleici Mosque and the Castle Gate, a stone tower that remains from a medieval wall. The mostly pedestrian bazaar area begins near the tower, itself home to vendor stalls. 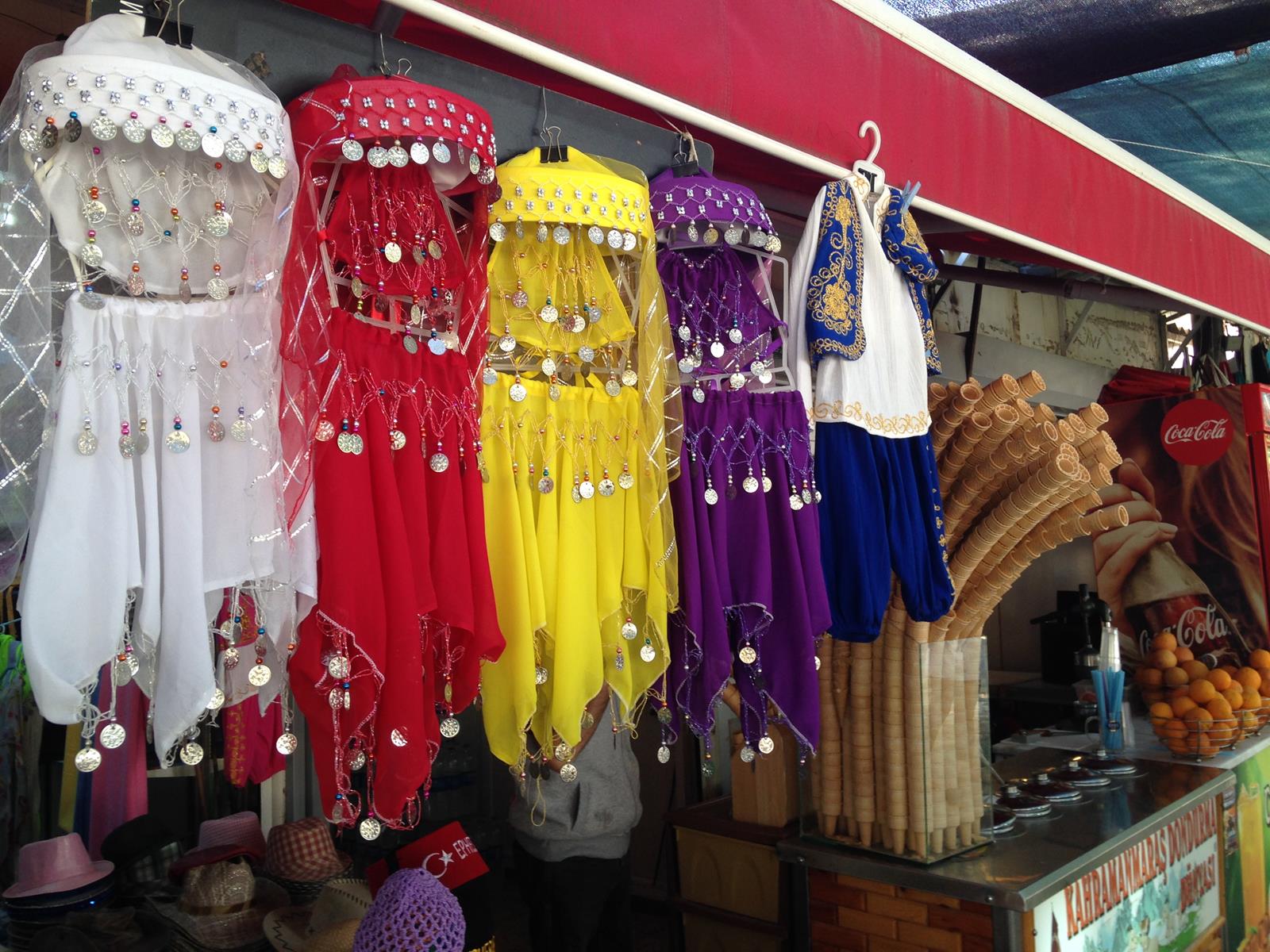 Belly dancing outfits are among the many souvenirs offered by shops in Kusadasi. (Randy Mink Photo)

Merchants peddle everything from rugs and wall hangings with traditional Ottoman patterns to knockoffs of Gucci, Louis Vuitton and other designer handbags and accessories. Or maybe “Genuine Fake Watches” will catch your eye. Shelves display onyx items, hookahs, fezzes, and ceramic bowls, plates and vases in geometric Turkish designs. Clothing—embroidered caftans and blouses, belly-dancing outfits, and sports jerseys and T-shirts—festoon many stalls. Turkish delight, a gel-like sweet that comes in flavors from lemon, apricot and pomegranate to pistachio, almond and hazelnut, is another souvenir staple. Most shopkeepers are not overly aggressive, so the street vibe is relatively laid-back, a relief to Americans not used to heavy-handed sales pitches. Signs declare “No Hassle” or “Disturbance-free Shopping.”

Outdoor restaurants in Old Town offer a vast selection of Turkish specialties, including marinated lamb or chicken kebabs grilled on a rotating vertical spit and served with French fries or rice, vegetables and pita bread. Also consider pide, an oval, Turkish-style pizza, or a plate of iskender, sliced kebabs smothered in a thick yogurt-tomato sauce. Opt for a ringside seat overlooking the street action or the quieter confines of a garden courtyard.

An alternative to venturing into the lanes of Old Town is taking a stroll along the breezy seaside promenade that parallels the coastal road. Landscaped with pines and palms, the public gathering place abounds with cafes and benches for soaking in the scene.

The classical world comes alive in Ephesus more than almost anywhere else in the Mediterranean. It is perhaps the most completely excavated and best preserved of the great Greco-Roman cities, an archaeological treasure chest matched only by Pompeii.

Panoramic views reward those who climb to the highest rows of the Great Theater at Ephesus. (Jeremy Mink Photo)

Ephesus, once the second largest city after Rome, was home to about 500,000 at its height. Located on a strategic trade route, the thriving port was a cultural, religious and commercial crossroads and has associations with the Apostle Paul. The famed missionary lived there from 53-56 A.D., founding a congregation and causing controversy among the Roman citizenry as he spread the Christian message.

Beginning in the 2nd century B.C., Ephesus was the Roman capital of Asia Minor and flourished for several centuries until the harbor silted up during the early Christian era. It once had many shrines erected to pagan gods, but by the 4th century the Christians had plundered the classical temples for the building of churches. The city was abandoned after the Ottomans came into power.

Memories of walking Ephesus’ colonnaded streets of marble, scrambling up the amphitheater’s steps and framing photos of the Celsus Library’s magnificent, two-story facade will linger for many years to come. The thrill, though, comes at the expense of jostling crowds. After all, Ephesus is the second most popular sight in Turkey (after the Sultanahmet district of Istanbul). And beware that there’s little shade from the hot sun beating down on the fields of white stone. Bring a brimmed hat, sunglasses, water and sunscreen, and take care not to slip on the marble pathways—one spot is especially treacherous going downhill; our guide said someone falls there every day.

Tourists from around the world throng the colonnaded streets of Ephesus, one of Turkey’s most visited attractions. (Jeremy Mink Photo)

The library, Ephesus’ best-known monument, originally was part of a complex that held 12,000 scrolls in wall niches, a reading room and a mausoleum to Julius Celsus, the Roman governor of Asia Minor. It was the third largest library in the ancient world (after Alexandria and Pergamon). Tourists are allowed to climb the marble steps of the lofty building, which was extensively restored in the 1970s. One guidebook compares the library to “a grandiose film set left behind after the shooting of a Roman spectacular.”

To command views of the ruins and surrounding countryside, ambitious visitors delight in climbing to the top of the 24,000-seat Great Theater, built by a Hellenistic king and re-erected by the Romans between 41 and 117 A.D. St. Paul preached to the Ephesians there and in their homes and synagogues as well.

Besides visions of past grandeur, visitors also get a look at the mundane side of life in Ephesus. Everyone chuckles when the guide points out the row of open-air public latrines—holes in the marble where people of both sexes would do their business side by side. Guides also fill you in on shops, markets and brothels. Resident cats prowling among the stones and weeds add a welcome diversion to the history lessons.

Many excursions combine the ruins of Ephesus with a visit to the House of the Virgin Mary, a Catholic pilgrimage site on Mount Koressos. According to legend, St. John the Apostle brought Mary, the mother of Jesus Christ, to Ephesus, where she spent her final days in a modest stone dwelling. A tiny church stands on the home’s 1st century foundation. Besides a brief look inside the chapel (no photos or talking allowed), visitors to the peaceful spot may light candles at a station outside and fill bottles with holy water from the spring. A wishing wall has scraps of cloth and paper with hand-written wishes and prayers. Paths shaded by olive and pine trees are lined with descriptive panels in multiple languages that explain the site’s history and significance. A shop sells statues and icons of Mary, Nativity sets and other religious items.

The monumental Celsus Library, built in the 2nd century A.D., is the very face of Ephesus, one of the grandest archaeological sites in the world. (Randy Mink Photo)

Ephesus treks from Kusadasi also may stop at or pass by the ruins of the Basilica of St. John, an ornate Byzantine church that rivaled Istanbul’s Hagia Sophia in size. Only a few graceful columns and mosaic fragments survive. Said to be built over the tomb of St. John, the hilltop church marks the spot where it’s believed Christ’s most beloved disciple wrote his section of the Bible. No matter where your excursion goes, it most likely will feature a demonstration/sales pitch at a carpet or leather goods shop.