Discover the Castles, Palaces and Monasteries of Switzerland

Any group trip to Switzerland can be enhanced by taking a step back in time. And what better way to time-travel than visiting the many castles, palaces and monasteries. They serve as an open book to this country’s rich heritage.

In Switzerland, there are dozens of captivating stories and treasures behind castle gates, palace doors and monastery walls, all waiting to be discovered and enjoyed. And because Switzerland is about the size of Vermont, it’s easy to reach these historic places by car, train, bus or boat.

Here is an overview of some of these Swiss gems:

Exquisite Chillon Castle, the most visited historic building in Switzerland, rests on the banks of Lake Geneva near Montreux and sits at the foot of the majestic Bernese Alps. For nearly four centuries, Chillon was the residence and toll station of the counts of Savoy. Visitors can tour the dungeon, medieval kitchen, halls and sleeping rooms, and see collections of ancient furniture and pewter. Lord Byron made the castle famous in his poem The Prisoner of Chillon. 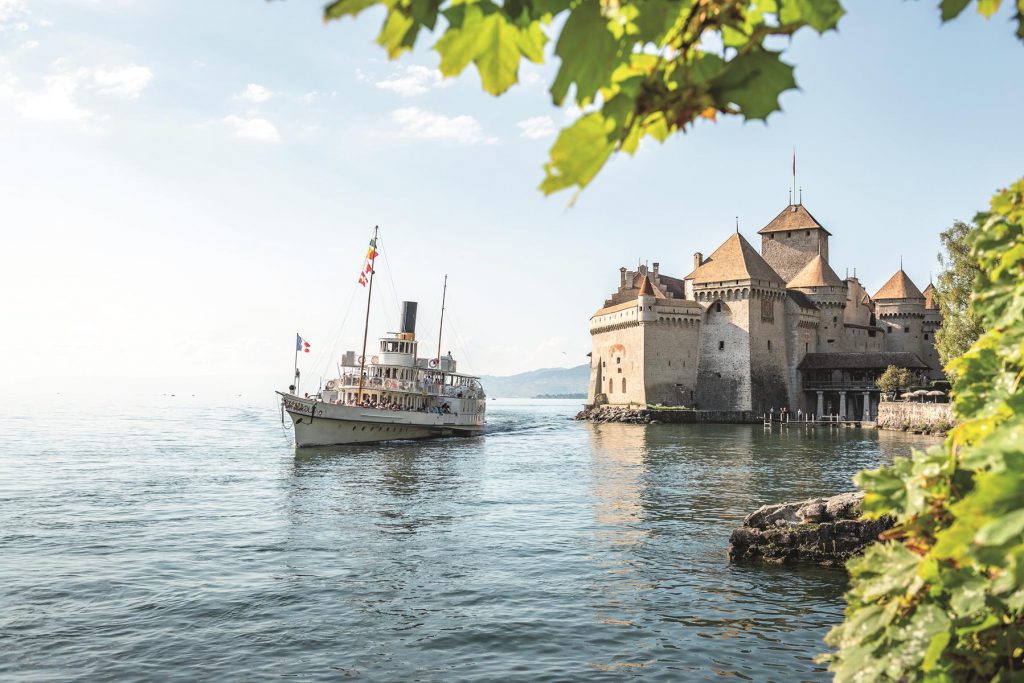 The 1020 Habsburg Castle, in the small town of Habsburg near the Aare River, is a medieval jewel. Hardly any other family has shaped European history as much as the Habsburgs. The remains of the front castle invite you to wander and climb, and the majestic castle behind hosts a permanent exhibition on the dynasty’s colorful past. The most scenic way to approach the castle is to walk on winding forest trails from the town of Brugg. The 11th-century Hallwyl Castle, one of the foremost “water castles” in Switzerland, is located at the northern end of Lake Hallwil on two islands near Seengen. The impressive complex, open to the public since 1925, was the family seat of the minor nobility of Hallwyl for 800 years. Members of this lineage made their mark on the battlefields of the old Swiss Confederacy, at the European courts, in science, politics, commerce and the world of finance. 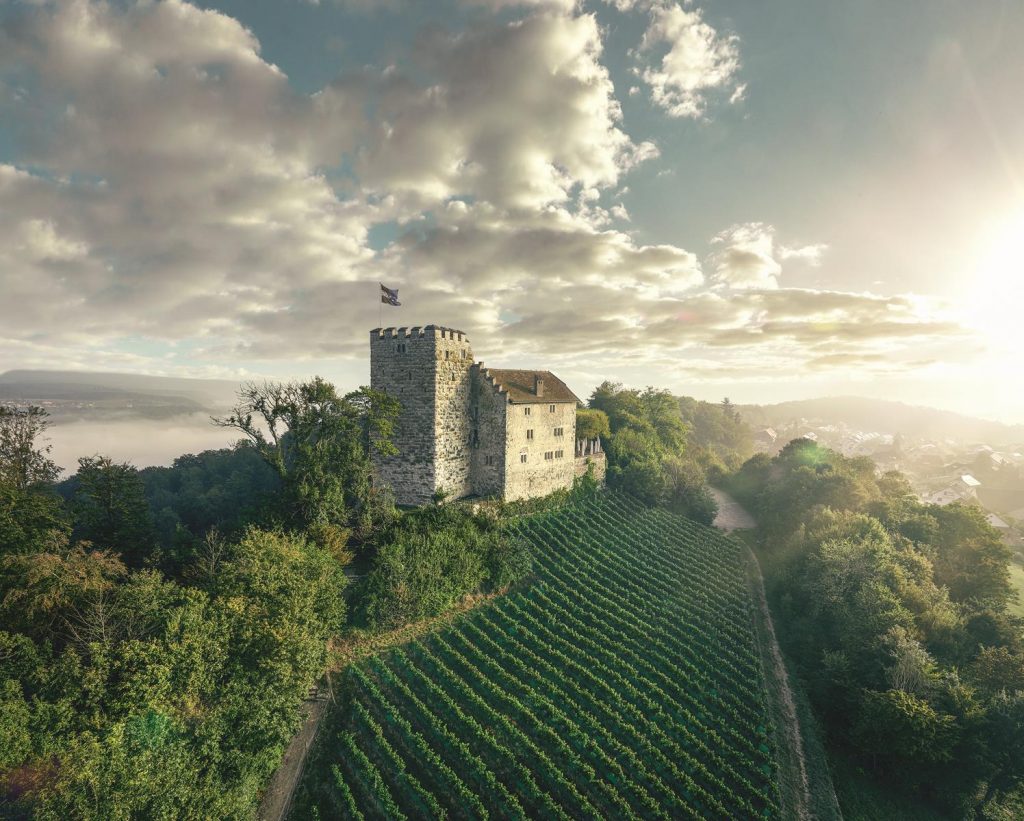 Munot Castle is a large, circular 16th-century Renaissance fortification crowning a round hill in the center of Schaffhausen. Surrounded by vineyards, the fortress serves as a symbol of this city on the Upper Rhine. The earliest presence of a castle dates to 1379, but the Munot was built between 1564 and 1589. Fallow deer were introduced to the fortress moat in 1905 and can still be viewed grazing happily undisturbed on the grass below the stone walls. The castle’s night watchman is exceptionally skilled at leading tours. 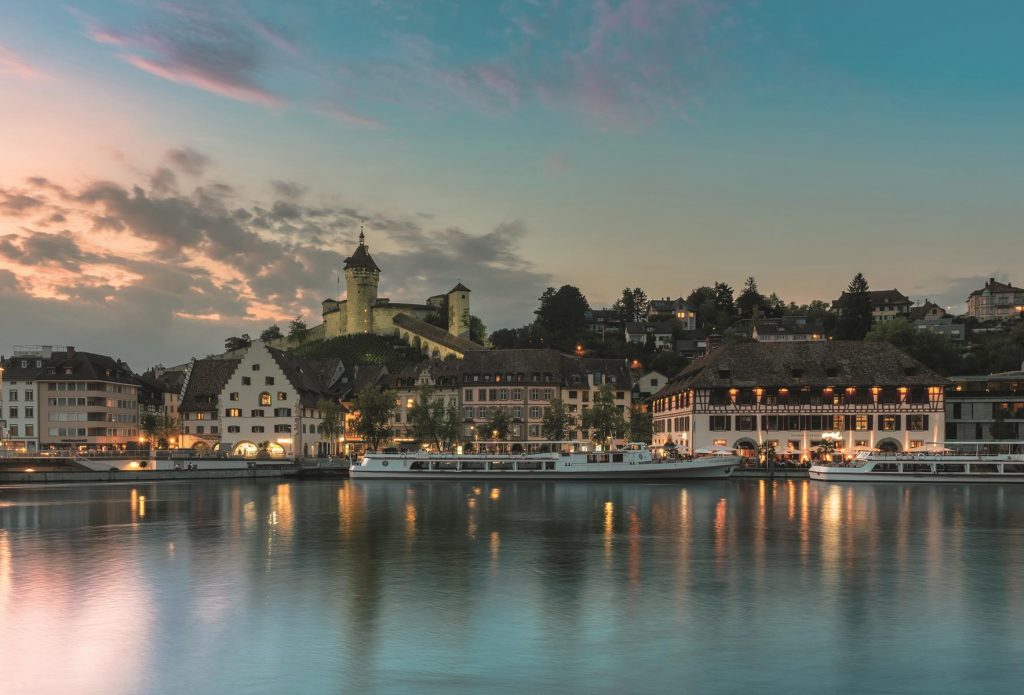 Castelgrande, the oldest of a trio of castles in Bellinzona, was built on a site first fortified in the 4th century. Easily identified by its two stone towers, the medieval monument stands on a flat-topped hill near the town center. It features two restaurants and a courtyard that’s perfect for picnics. Montebello Castle was built in the 14th century, expanded in the 15th century and renovated in the early 1900s. The castle affords sweeping panoramas of the city and is home to the Civic Museum, which showcases archaeological artifacts from prehistoric burial sites in the region. The third castle, Sasso Corbaro, dates from 1479 and houses exhibition halls and an excellent restaurant. The Sforzas built the geometrical structure after the defeat of Milanese troops at the Battle of Giornico; it was designed and completed in just six months.

Gruyères Castle, a 13th-century landmark ensconced atop the quaint town of the same name, offers grand vistas of Fribourg canton’s Alpine foothills. Treasures include stained-glass windows dating from the Middle Ages and capes belonging to Charles the Bold’s Knights of the Order of the Golden Fleece. Storytellers in medieval costume recount the legends of the castle and region on entertaining guided walks. There’s also a multimedia show. The castle pairs well with a visit to nearby La Maison du Gruyère AOP, a show dairy where Gruyère cheese is made.

It’s said that in St. Gallen you will find history at every turn, especially in its Abbey District. The spirit of the early Benedictine monks is discernible when you enter the famous Abbey Library, the world’s oldest library, at the Abbey and Convent of St. Gall, also known for its Baroque cathedral. The convent, including the library and monastery archives, was added to the UNESCO World Heritage list in 1983. 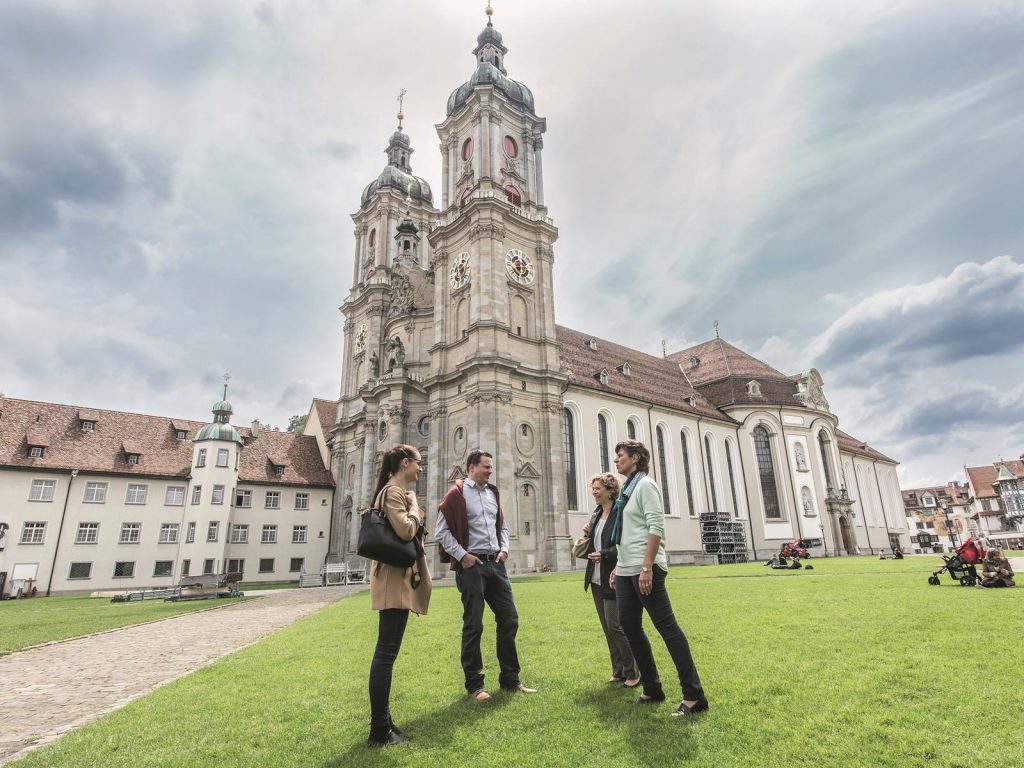 Pilgrims have been visiting the extraordinary Monastery of Einsiedeln for more than 1,000 years. Founded by the Benedictine monk Meinrad in 835, the Baroque complex, a major station on the Way of St. James, lies amid a breathtaking landscape with a deep blue lake and jagged mountaintops. The black marble Mercy Chapel in the monastery church contains the precious 15th-century Black Madonna.

The internationally-renowned Convent of St. John in Mustair contains the largest collection of early medieval frescoes from around the 800 period. The UNESCO World Cultural Heritage Site owes its existence to Charlemagne, being one of the few architectural examples from the Carolingian period. At the museum in the Planta Tower, visitors can view some of the convent’s inner workings and an exhibition presenting 1,200 years of monastic and architectural history. At the convent’s guesthouse and chapel, visitors may join in church prayers and the Eucharist. The smaller Holy Cross Chapel features Europe’s oldest dated wooden beam ceiling. The area is bordered by the Swiss National Park.

Disentis Monastery, located southeast of Lucerne, is the spiritual and educational center of the Upper Rhine Valley and the oldest Benedictine abbey north of the Alps. Founded around 720, it has a museum with ecclesiastical art and exhibits on abbey history. Benedictine monks welcome visitors at their hourly prayers and at the celebration of the Eucharist.

What’s special about Rapperswil Monastery at Rapperswil-Jona is that guests can truly immerse themselves in the life of the monastery community. Guests are asked to participate in the religious services and meditations during their time there, and men and women of all denominations and religions are welcome. Guests are assigned an accompanying brother or sister, and the length of the stay is decided in advance, but always starts and ends on a Sunday. Rapperswil-Jona, located on the upper end of Lake Zurich, combines Riviera-type sights, cultural life, hiking and sports possibilities with a Mediterranean holiday atmosphere.

Chateau de Prangins, built in the 18th century with classic architecture by Louis Guiguer, a Swiss banker living in Paris, has hosted illustrious guests from Voltaire to Joseph Bonaparte. Overlooking Lake Geneva, the elegant building is home to one part of the Swiss National Museum. The chateau features a romantic French-style park and the largest historical vegetable and fruit garden in Switzerland. The permanent exhibition “Noblesse Oblige! Life at a Chateau in the Eighteenth Century” is set in the former reception rooms, which comprise the salon, dining rooms and libraries.

L’Isle Palace is Versailles in miniature, a harmoniously designed palace in the French Neo-classical style. Located in the canton of Vaud in the Lake Geneva region, it was built in 1696 for Charles de Chandieu, an officer in the French Army. Purchased by the town in 1877 and now used as a school, it is not open to the public (except for banquets) and can only be admired from the outside.

Pretty Chateau de Villa, situated in the middle of rolling vineyards in Sierre, awaits your visit for a fine meal and delectable wines. Raclette is a specialty of the house restaurant. The wine list features some 650 wines from more than 110 wineries in the canton of Valais. 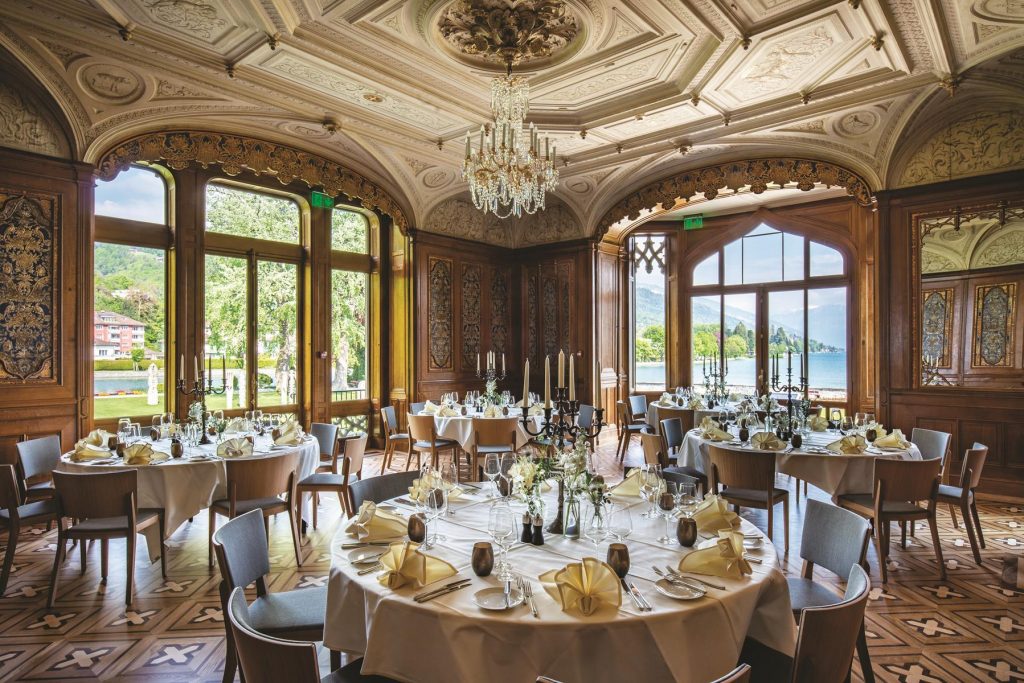 Feed the ducks on the shores of Lake Thun or rest on a bench at Schadau Park Castle, built in the Romantic and Neo-Gothic styles between 1846 and 1854. Or you can take a walk along park paths through the woods and across inviting meadows. Catch great views of the Eiger, Mönch and Jungfrau peaks and then have brunch, lunch, tea or dinner in the castle restaurant and stay the night in one of the luxurious rooms. 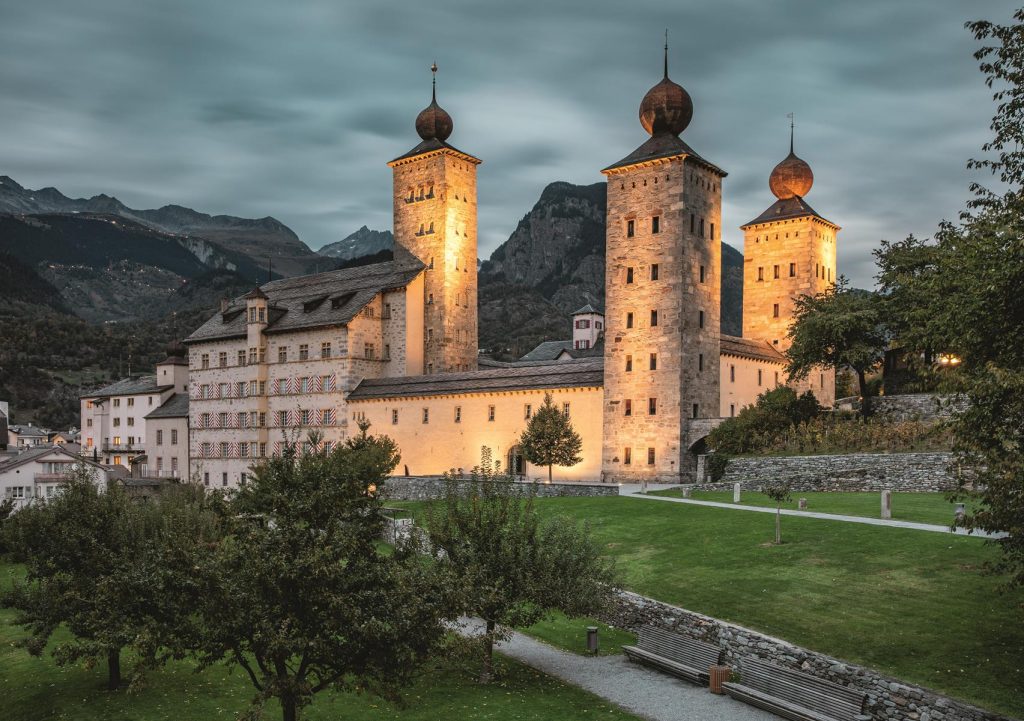 In Brig-Glis, Stockalper Palace, built by Kaspar Stockalper in the 1600s, is an extension of his ancestors’ mansion. The massive palace is the largest Baroque secular building in Switzerland and was nicknamed the “houses and the chapel of the Three Kings” by Stockalper, who was one of the most significant figures in the history of the canton of Valais. Stockalper was a statesman, politician, builder and jack-of-all-trades who amassed an impressive fortune. On the ground level, a museum features exhibitions on the history of the Simplon Pass and is the starting point for tours.