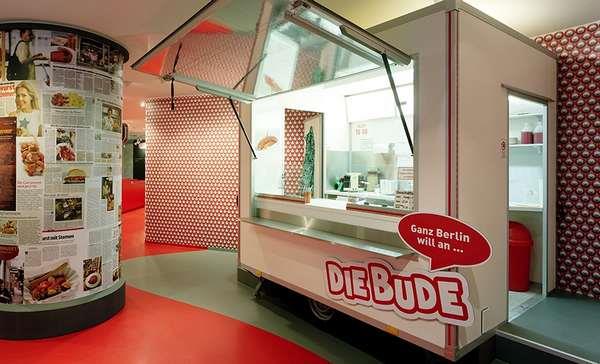 Eaten with a tiny plastic or wooden fork from a flimsy white paper plate, currywurst is a popular fast food found at snack stands throughout Berlin. So popular, in fact, that it enjoys cult status and reigns supreme as a culinary emblem of Germany’s capital and largest city.

More than 70 million currywursts are sold annually in Berlin, the world’s currywurst capital. 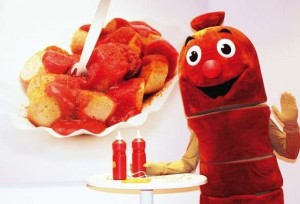 Usually served with french fries or a roll, currywurst is a sliced-up pork sausage smothered in a tangy ketchup-like sauce. You order it with or without casing.

For all the lowdown on this humble meat treat, visit the quirky German Currywurst Museum Berlin, located not far from Checkpoint Charlie in the city’s historic center. You learn about the street food’s history and its role in popular culture, as well as those who make and serve the iconic indulgence. There’s even an exhibit on the ecological consequences of using paper plates.

Currywurst, as the story goes, was invented in 1949 by Berlin snack kiosk owner Herta Heuwer. It was a slow day, so she had time to experiment with a new sauce recipe. She mixed Worcestershire sauce, curry powder, tomato puree and a few other ingredients, then poured it over a sausage. The dish became a hit with American soldiers stationed in Berlin after World War II. Herta patented her chili-ketchup sauce under the name “Chillip” 10 years later. 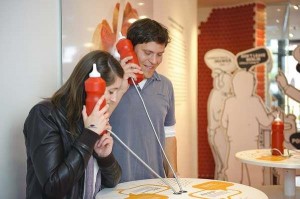 Museum visitors learn everything they ever wanted to know about currywurst through interactive exhibits.

Every currywurst vendor has his or her own secret recipe, but common ingredients are tomatoes, onions, salt, chili peppers, sugar, vinegar, oil and water. There may be curry powder in the sauce or it may be dusted on. One of the museum’s exhibits looks at all the spices involved and lets you take a whiff.

Museum visitors can watch the humorous documentary film “The Best of the Wurst.” Nearby monitors show the significance of currywurst on TV. Contributing to the snack’s fame was the 1980s German TV series “Three Ladies and Their Hot Dog Stand.”

Visitors also can go behind the scenes of a food trailer, smell spices at “scent stations,” relax on a “Sausage Sofa” and locate currywurst purveyors on a map of the world. In the computer game “Curry Up” they undertake the challenge of preparing a virtual currywurst in 60 seconds, from cutting up the sausage with a plastic knife and pouring on sauce to adding curry powder and a dash of chili for extra spiciness.

Currywurst in a cup, served at the museum’s on-site food stand, is included in the price of admission. The gift shop sells more than 70 currywurst-themed items, from jars of sauce and spices to plush toy sausages.

Among Berlin’s best-known currywurst stands are Konnopke’s, located beneath a railway viaduct in the Prenslauer Berg neighborhood, and Currywurst 36 in the bohemian Kreuzberg district. A kiosk near tourist-thronged Checkpoint Charlie is called Checkpoint Curry. 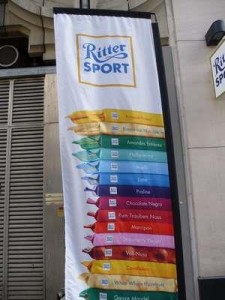 Sweet toothes in Berlin find their way to Ritter Sport Chocolate World, a short walk from the Currywurst Museum. It’s a great place to stock up on your favorite flavors—and try new variations–of the solid square candy bar made in Germany. The whole hazelnut, raisin and nut, marzipan, yogurt, cornflake, and biscuit varieties are among the most popular. The store’s Ritter Sport bars are much less expensive than in the U.S., with multi-packs especially good bargains. Oversized bars make fun gifts. You can even have a bar custom-made with ingredients of your choice.