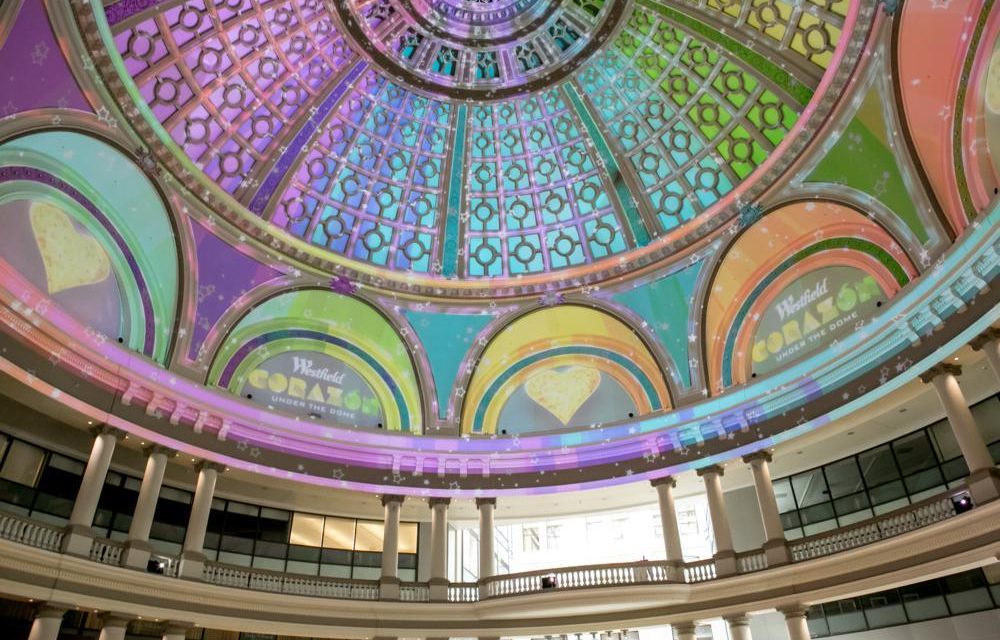 Showcasing iconic images and set to beloved San Francisco-centric songs, the dazzling musical rocks through the decades delighting visitors of all ages. Corazon Under the Dome will be projected on the Centre’s majestic 102-foot wide dome nightly from July 11—September 3.

“As San Francisco commemorates the 75th anniversary of the Golden Gate Bridge, what better occasion for Westfield to celebrate all that makes our beloved city so special?” said Shelly Schembre, General Manager of Westfield San Francisco Centre. “Striking images, innovative technology and popular songs that inspire sing-alongs ensure that Corazon Under the Dome will be an unforgettable experience for guests of all ages.”

The visual and musical journey through San Francisco history — from the Gold Rush to the Summer of Love, and beyond — is set to a nostalgic soundtrack that includes classics from Tony Bennett, Otis Redding, Judy Garland, Journey, Santana and The Steve Miller Band, to name a few. The show features images of the gold mining era of the 1840s, the 1906 earthquake, 1930’s jazz, the Beatnik era of the 1950s, the psychedelic haze of the 1960s, disco of the 1970s, and San Francisco’s beautiful new waterfront in the 1990s. From cable cars and Coit Tower to Fisherman’s Wharf and the Ferry Building, Corazon Under the Dome is a dazzling tribute to the City by the Bay.

The dome is more than 11,000 square feet – nearly three times the size of a standard IMAX screen – creating an extraordinary experience. Westfield has partnered with Obscura Digital, a San Francisco-based creative technology studio, to conceive and create the innovative show using one-of-a-kind 3-D mapping technology. Obscura was also responsible for the breathtaking Illuminique Under the Dome holiday light spectacular at Westfield. Their portfolio boasts building projections the world over, including the Sydney Opera House in Australia, Guggenheim Museum in New York, and Disney Concert Hall in Los Angeles. Corazon Under the Dome is an unrivaled “must-see” for visitors from around the world.

Guests are invited to enjoy the show while enjoying light bites at the newly opened La Boulange du Dome or lounging at Westfield’s pop-up Park Under the Dome. The park is decked with lawn chairs and showcases a replica of the Golden Gate Bridge and Crissy Field in honor of the bridge’s 75th anniversary.

After a day of shopping, visitors can cap off their experience with an exquisite meal from The Restaurant Collection Under the Dome. Guests can dine within the handsome décor of LarkCreekSteak, savor the Pan-Asian dishes of Straits Restaurant, celebrate the flavors of Italy at Cupola Pizzeria, or feast on the decadent “Le Dome” dessert at the new La Boulange du Dome.

Visitors always appreciate exclusive amenities as well, including Westfield San Francisco Centre’s VIP Passport program, which entitles travelers to hundreds of dollars in savings, special offers and services provided by dozens of participating shops and restaurants. Vouchers are available at most area hotels, visitor centers, or from tour operators and travel agents. The vouchers can be presented at the Concierge Desk, along with an out of town driver’s license or passport, in exchange for a VIP Passport. Convention visitors can show their convention badge and for visitors who are AAA Show Your Card & Save members or are a Visa Signature cardholder, they simply present their cards at the Concierge to receive their VIP Passport.