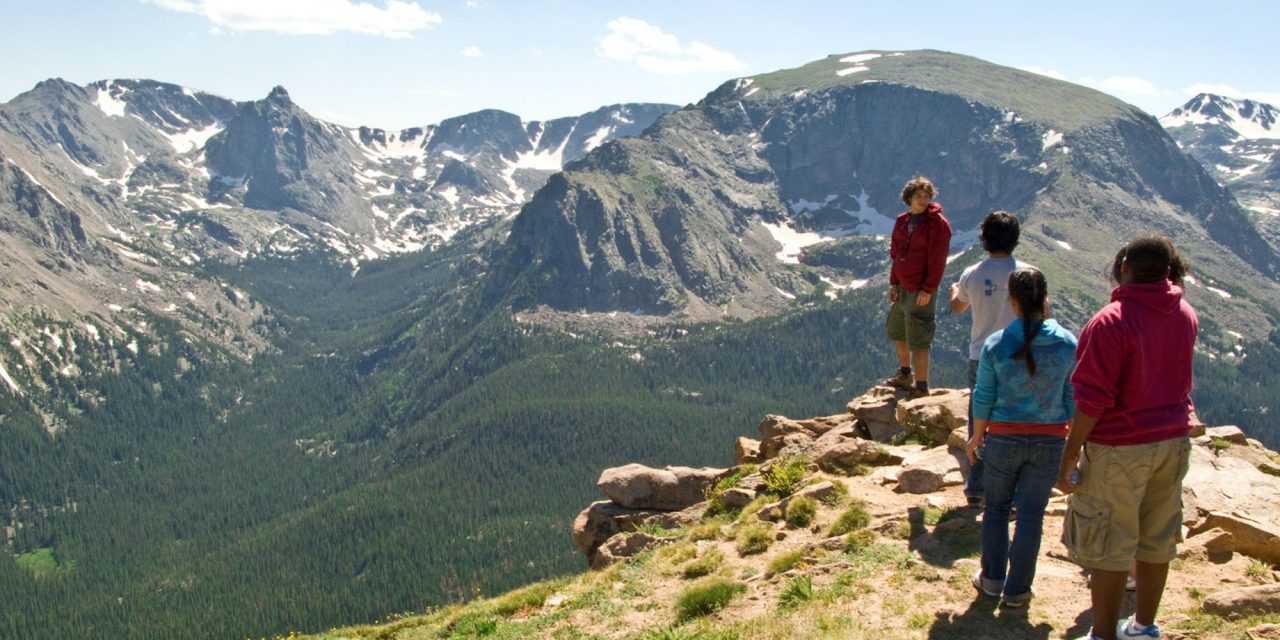 Schedule an adventure on one of these 7 routes

Visitors to Colorado will be greeted by a collection of landscapes that rival anywhere else in the nation for diversity and beauty. Groups can experience the majestic Front Range Mountains, high desert plateaus of Grand Valley and the rolling plains in the state’s eastern half along Colorado’s Scenic Byways. These 26 routes cover every corner of the state and are excellent ways to structure your Colorado group itinerary. Below are seven routes that showcase Colorado’s urban playgrounds, beautiful national parks and rich history.

Passing through the gorgeous San Juan Mountains, this loop in Colorado’s southwestern corner includes stops in beautifully preserved heritage sites, historic mining towns and soothing hot springs. Begin your adventure in Durango, which developed in the 1880s as a railroad hub and welcomes visitors with blocks of Victorian, Greek and Spanish Colonial Revival architecture.

Walk through the Main Avenue Historic District to pass by the Strater Hotel (an opulent building that catered to railroad barons) and Rio Grande Railroad Depot before boarding the Durango & Silverton Narrow Gauge Railroad. 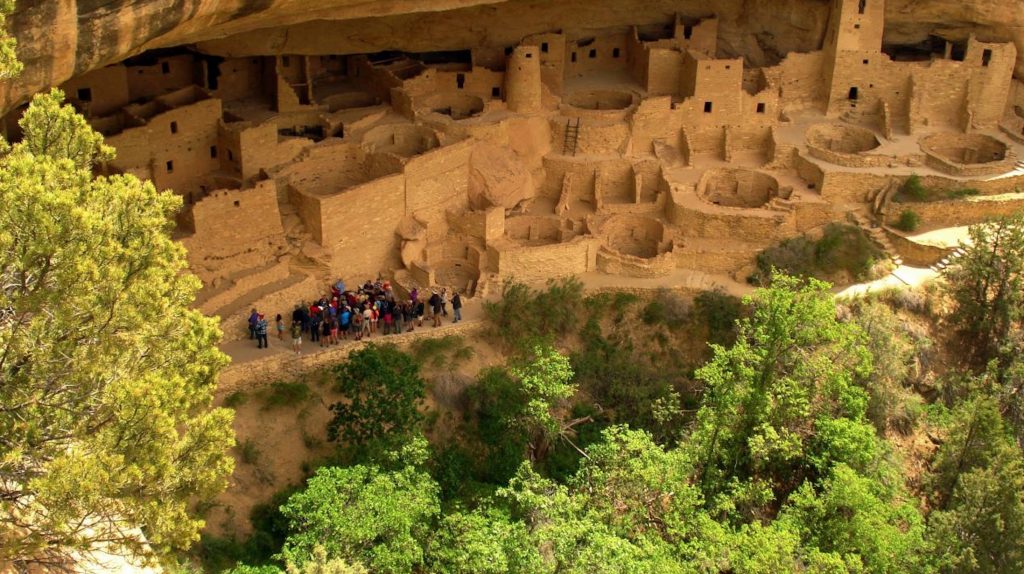 Established in 1882 to transport gold and silver through the mountains, this route passes through cascading creeks and virgin pine forests on a steam-powered train. Groups will follow the course of the Animas River while relaxing in open-air coaches before disembarking in the historic city of Silverton. This former silver mining camp offers alpine views and the opportunity to explore sites like Old Hundred Mine (where you can follow a vein thousands of feet into the mountainside) and Mayflower Mill (where you can learn how prospectors extracted precious metals from ore).

Located just south of the San Juan Skyway is Mesa Verde National Park, a collection of over 600 preserved cliff dwellings that housed the Ancestral Pueblo people in the 1200s. The park’s most spectacular site is the Cliff Palace, an immense structure that consists of 150 rooms and 23 kivas (spiritual spaces used for religious ceremonies).

A variety of ranger-led tours can also guide groups through the Long House, Balcony House and Wetherill Mesa. Continue to the nearby city of Cortez to learn more about the area’s Native American history at the Crow Canyon Archaeological Center and browse the galleries of the Mancos Creative District.

The canyon-clinging stretch of the byway between Silverton and your next stop, Ouray, is called the Million Dollar Highway either because it cost so much to build or the amount of gold ore that remained in the roadway’s fill. Promoted as the Switzerland of America, this tiny alpine town boasts gorgeous snow-capped scenery and numerous outdoor pursuits.

Plan a dip at the healing Ouray Hot Springs Pool, which began operating in 1927. Be sure to explore the town’s miningera buildings preserved within its own National Historic District.

Conclude your visit in the city of Telluride. Shadowed by the San Juan Mountains and lined with Victorian architecture, this former gold mining town attracts skiers in the winter and movie stars during its acclaimed fall film festival.

However, its secluded location has preserved its hidden gem status for groups seeking outdoor recreation during the summer. Low-impact hiking routes include the Cornet Creek Falls Trail, Bridal Veil Falls Trail (to see the tallest free-falling waterfall in Colorado) and the San Miguel River Trail. Looking for hip art galleries and boutiques? Downtown Telluride and the Mountain Village base area are connected by a free gondola, and the monthly art walk encourages visitors to sip a glass of wine while admiring the work of local painters.

Circling through the foothills of the Rocky Mountains, this route passes through spectacular rock formations and landmarks of Old West history, and it makes for a great day trip for groups using Denver as their hub-and-spoke. Begin in the city of Golden, which began as a Pikes Peak Gold Rush town in 1859 before becoming a thriving university community located in the shadow of Lookout Mountain.

Learn about the Front Range’s gold rush legacy at the Mines Museum of Earth Science, tour the Arts & Craftsstyle Boettcher Mansion and enjoy the bistros and bars that line historic Washington Avenue. Golden is most famous as the headquarters of Coors Brewing Company, and your group can register to tour the world’s largest single brewing facility in the world.

Venture into the mountains to visit the Buffalo Bill Grave & Museum. The resting place of America’s famous cowboy and showman includes artifacts from the touring Buffalo Bill’s Wild West Show, a peace pipe that belonged to Lakota leader Sitting Bull and beautiful views of downtown Golden. Continue into the mountains and the town of Evergreen, whose hillsides are populated with bighorn sheep during the winter months as they descend to lower elevations for food.

Embark on a 1.4-mile hike around Evergreen Lake before touring Hiwan Heritage Park (a former summer camp and home to one of the state’s first female doctors) and Dinosaur Ridge (where you can view preserved Stegosaurus bones and Iguanodon tracks in an outdoor museum). Conclude your loop at Red Rocks Park & Amphitheatre, an immense outdoor performance venue carved into the sandstone walls of the Fountain Formation. Take part in a morning yoga session, hike uphill for views of downtown Denver and tour the Colorado Music Hall of Fame. 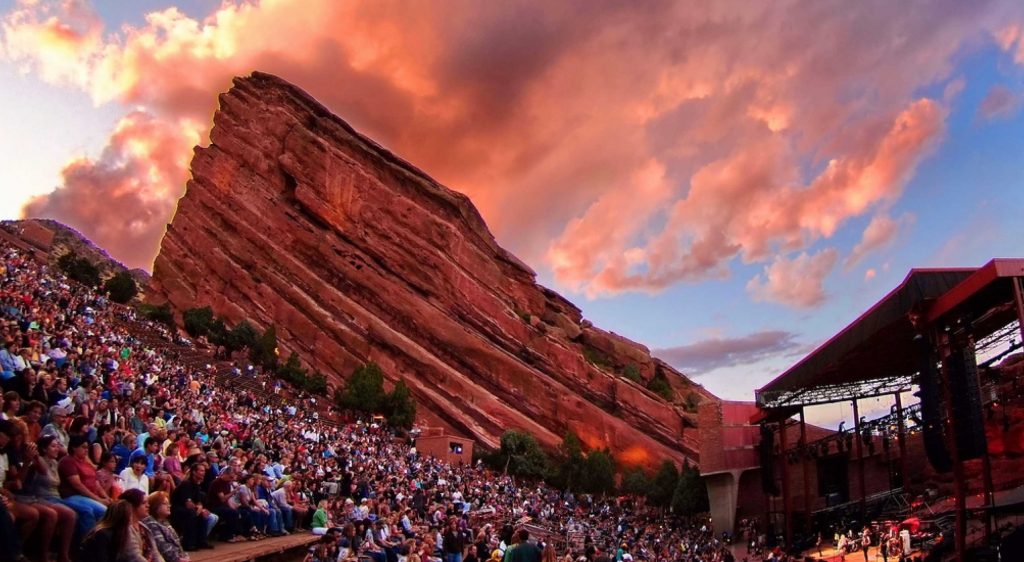 Over 150 million years ago, the arid region along Colorado’s western edge was a lush jungle populated by massive ferns and towering dinosaurs. Begin in Dinosaur National Monument, a 210,000-acre landscape where you can drive through ancient waterbeds, hike through dramatic river canyons and view the massive fossil display at the Quarry Visitor Center (located on the Utah side of the park).

The center houses an immense slab of exposed rock that contains over 1,500 bones of species such as the Stegosaurus and Allosaurus. Enjoy the local eateries and kitschy sculptures in the town of Dinosaur before heading south to the Canyon Pintado National Historic District. Occupied by the prehistoric Fremont Indians 11,000 years ago, this canyon is filled with mysterious petroglyphs often defined with depictions of Kokopelli: the hunched flute player. 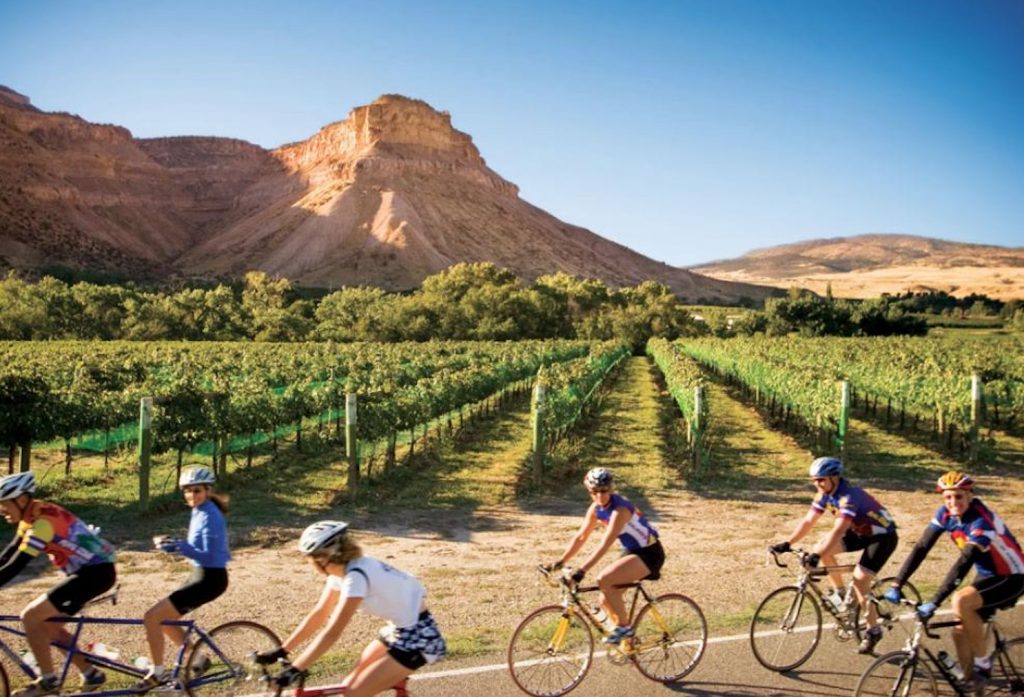 Travel through Douglas Pass to arrive in Grand Valley. Nourished by the convergence of the Gunnison and Colorado Rivers, this area is famous for its bountiful orchards and vineyards. Sample creations from nearly two dozen wineries after an invigorating hike through the colorful canyons of Colorado National Monument, and enjoy outdoor dining and the over 100 pieces of public art in downtown Grand Junction. The nearby city of Fruita offers desert sidetracks for mountain bike enthusiasts, an official Colorado Welcome Center and more rare fossils at the Dinosaur Journey Museum.

Thousands of covered wagons traversed the Santa Fe Trail from Missouri to New Mexico during the route’s heyday in the 1800s. Begin at the Colorado Welcome Center in Lamar. Before you leave town, admire the art deco designs of the Lamar Theatre and expansive World War I poster collection at the Big Timbers Museum.

Learn about sobering moments of American history in the nearby town of Amache and the Sand Creek Massacre National Historic Site. U.S. volunteer soldiers attacked a village of Cheyenne and Arapaho Indians in 1864 and ultimately killed 230 people. These innocent victims are honored by a memorial that overlooks Big Sandy Creek, and a park ranger can lead groups on Monument Hill Trail to provide historical context. 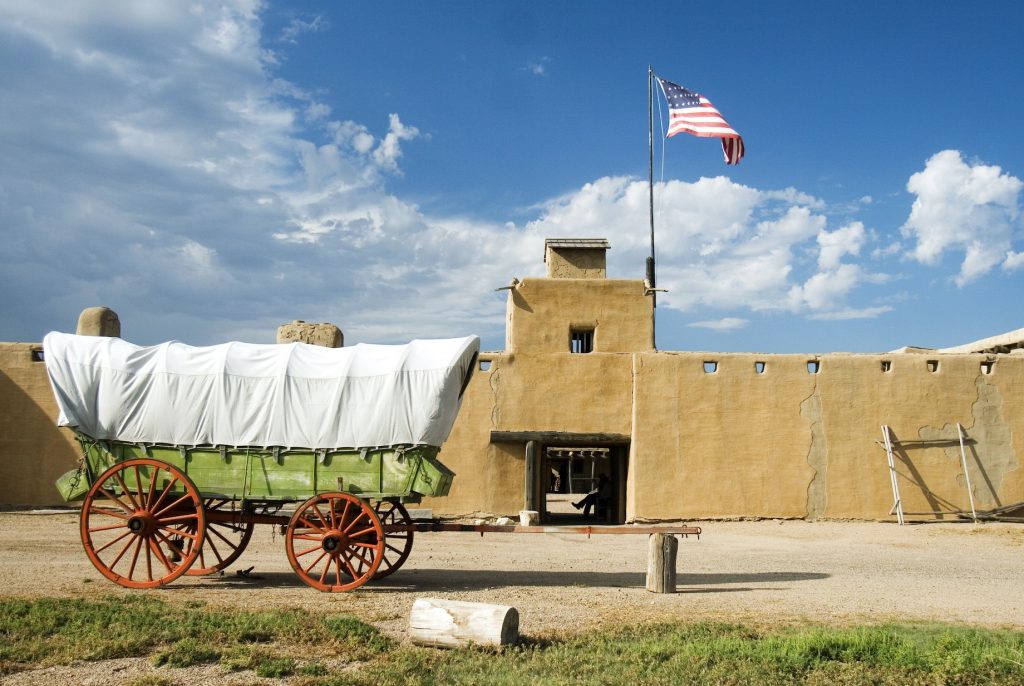 Pass through the city of Las Animas to John Martin Reservoir Park, the second-largest body of water in Colorado. Here your group can enjoy a picnic and spot rare species like the piping plover and interior least tern along the lakeshore. Continue to Bent’s Old Fort and Battle Site, a reconstruction of a once thriving trading post that connected fur trappers, local Indian tribes and westward pioneers.

Register for an interpretive tour to interact with costumed craftspeople and walk the ramparts of this adobe structure. Drive through Comanche National Grassland and spot beautiful songbirds before ending your Colorado Tourism route in Trinidad, a small city with a quaint Victorian downtown.

Meaning “hide the powder” in French, the Cache la Poudre was bestowed its name by French trappers in the 1820s who were caught in a snowstorm and forced to bury their gunpowder along its banks. Today the river is the essential natural feature of Fort Collins, a thriving university town, craft beer hub and starting point of this scenic byway.

Founded as a military outpost and later a thriving agricultural center, downtown Fort Collins retains much of its original Western facades and is home to hundreds of charming storefronts and group-friendly restaurants. Groups can register for a tour of New Belgium Brewing, learn about the city’s Prohibition history and walk the Poudre Trail along the river. 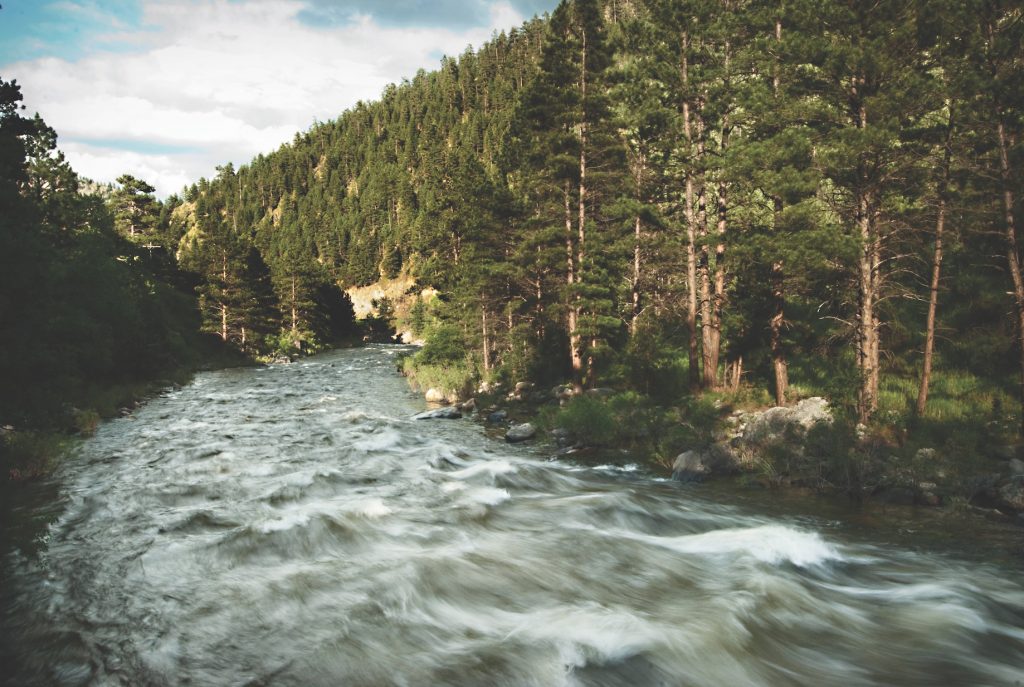 Follow the Poudre upstream through the vast woodlands of Arapaho and Roosevelt National Forests to Cameron Pass, where you can witness the river’s strongest rapids. Descend to North Park and the city of Gould, which has been dubbed Colorado’s Moose Capital. You can learn more about these extraordinary animals at the State Forest State Park’s Moose Visitor Center.

Bisected by the Continental Divide, Rocky Mountain National Park is a awe-inspiring landscape of craggy peaks, serene alpine lakes and dense spruce forests. Trail Ridge Road, used by Ute Indians for centuries before it was widened for vehicles in 1926, is the highest paved through-road in the United States and offers jaw-dropping views. Be sure to stop at the Alpine Visitor Center, the highest elevation building in the National Park System.

Before you embark on the trail, spend time in the charming mountain community of Estes Park. Popular attractions include the Estes Park Aerial Tramway (an enclosed gondola that whisks guests to an elevation of 9,000 feet at Prospect Mountain), the Stanley Hotel (a haunted lodge that inspired the Overlook Hotel in Stephen King’s The Shining) and the Riverwalk (where the Thompson River and Fall River wind through the city).

Next, admire the glacier-carved valleys and crystalline lakes of Rocky Mountain National Park along Trail Ridge Road. Groups can stop at the Holzwarth Historic Site (a preserved 1920s homestead), Lulu City (an abandoned mining town) and animal observation areas where your group can spot herds of elk, bighorn sheep and moose. Exit the park and conclude your route in the town of Grand Lake, a quaint village named for Colorado’s highest natural lake.

Visitors can walk the historic boardwalk to enjoy an old-fashioned ice cream sundae, enjoy Broadway-caliber productions at the Rocky Mountain Repertory Theater and embark on a short hike around the lake itself.

Groups looking for an alternative to mountain routes should consider the High Plains of Colorado’s northeastern corner. Named for an offshoot of the Oregon Trail that followed the South Platte River and passed through the town of Sterling, the Overland Trail Museum commemorates westward expansion and the early pioneers of eastern Colorado. The museum campus includes a schoolhouse, church, general store and barn that all predate 1915, and local historians can demonstrate how 19th century smiths and farm machinery worked.

The route then dips south to the town of Fort Morgan, a former military outpost where your group can learn about the Gold Rush prospectors who traveled along the Overland Trail at the Fort Morgan Museum and see elegant Victorian homes in the Sherman Street National Historic District. 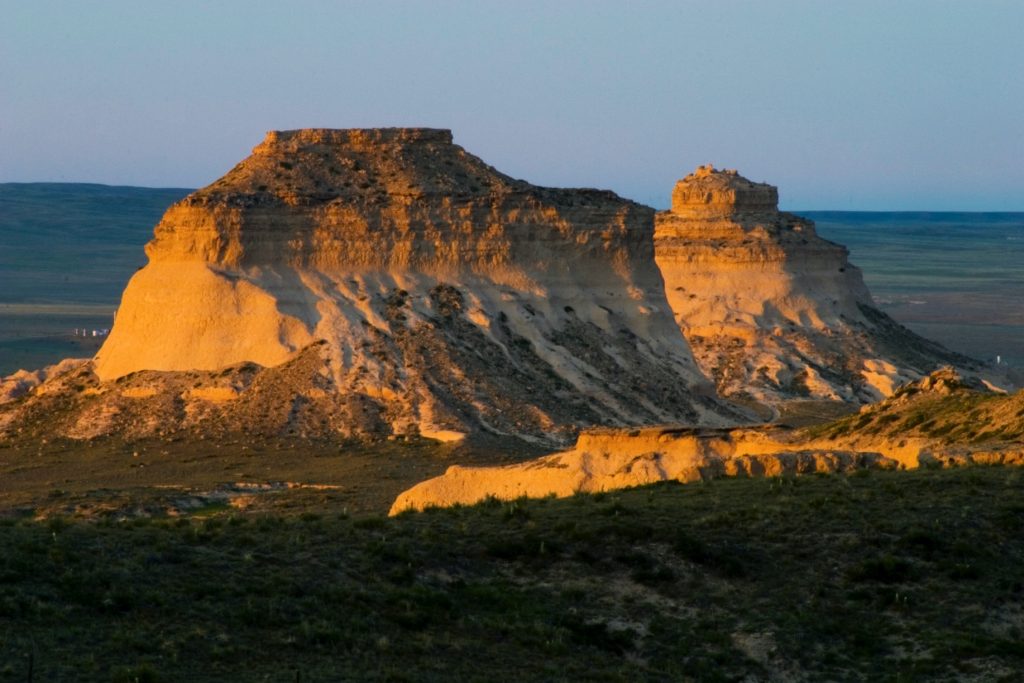 Continue west to experience the amazing biodiversity of the Pawnee National Grassland, where you can spot mountain plovers, skylarks and burrowing owls along several trails. This area may appear dry, but there are fields of delicate wildflowers in bloom every spring. The Pawnee Buttes, two fortress-like sandstone mesas that date back 40 million years, can be seen up-close from a 1.5-mile trail off the main road. Note that some of these vehicle trails are unpaved.