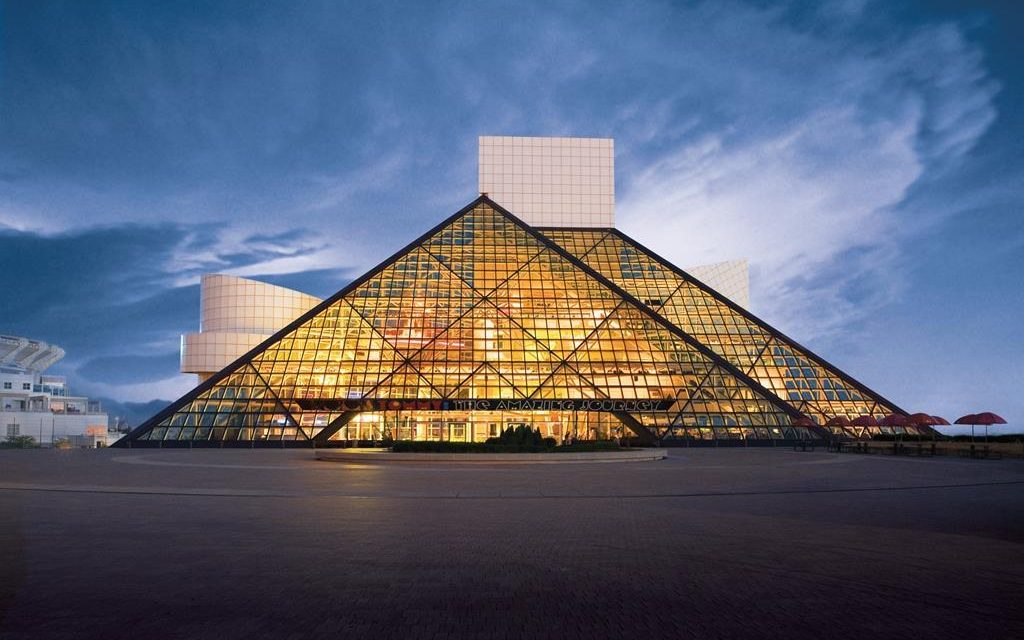 In Cleveland your groups can cruise on a Great Lake, enjoy big-league sports and sample cheese at a historic food market. They can try their luck at a new casino, marvel at marine wonders in a new aquarium and see where a quirky cult Christmas movie was filmed. You might have trouble tearing some of them away from what many consider to be the city’s star attraction − the Rock and Roll Hall of Fame and Museum; even a two-hour visit there just isn’t enough.

A good rule of thumb for tour planners: Devote more time to Cleveland than you originally had intended. Once you realize the diversity of attractions and their relative proximity to each other, you know you’ve discovered itinerary gold. How could you call this place dull?

The glass pyramid that houses the Rock and Roll Hall of Fame and Museum has become a city landmark and a tourism-generating powerhouse. With seven floors of exhibits, the museum deserves as much time as you can give it. Whether a fan of Elvis Presley, the Beatles, Jimi Hendrix or Madonna, everyone remembers a certain era and revels in nostalgia as they peruse the photos, videos, costumes and instruments. There are the pioneers like Chuck Berry, Jerry Lee Lewis and Buddy Holly. Motown is represented by the Jackson Five, Aretha Franklin, Smokey Robinson, and Diana Ross and the Supremes. Beatles memorabilia includes a Yellow Submarine toy and jackets worn by the Fab Four. See Elvis’ white-beaded jumpsuit and film clips of “The King” in concert. Listen to disc jockeys from your city.

Rolling Stones: 50 Years of Satisfaction, running through next March, is the museum’s first ever major exhibition capturing the band’s long career. Chronicling the Stones from the mid-1960s, it includes personal items that have never been seen before by the public. The exhibit, with film and interactive technology, takes up two-and-a-half floors.

The rock music shrine is just one of several attractions fronting Lake Erie in downtown’s North Coast Harbor District. A short walk away is the Great Lakes Science Center, which offers an Omnimax theater and the NASA Glenn Visitor Center, a collection of exhibits on aeronautics and space exploration. The science museum’s Steamship William G. Mather, a restored Great Lakes freighter built in 1925, is moored on the lakefront and open for visits from May to October. Next door to the Science Center is Cleveland Browns Stadium, which offers behind-the-scenes tours. 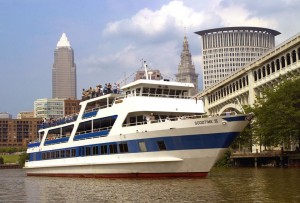 From North Coast Harbor, the city’s largest sightseeing vessel provides a good orientation to Cleveland. For captivating skyline views, consider a narrated Lake Erie/Cuyahoga River cruise aboard the 1,000-passenger Goodtime III. Lunch and dinner sailings are available. Another popular cruise boat is the Nautica Queen, which offers lunch and dinner cruises from The Flats, a riverside district that has grown in popularity with the opening last year of the Greater Cleveland Aquarium. At Ohio’s only free-standing aquarium, located in the historic FirstEnergy Powerhouse, guests can walk through the Shark SeaTube with sharks and fish swimming overhead. One exhibit features freshwater species native to Ohio. One- and two-hour tours of Cleveland on Lolly the Trolley depart from the Powerhouse.

Terminal Tower, a 52-story skyscraper on Public Square, is the most recognizable beacon on Cleveland’s skyline, and its enclosed observation deck is open to group visits at any time (only on weekends to the general public.) The top of the Art Deco masterpiece, dedicated in1930 and once the tallest building outside of New York, is bathed in colored lights for holidays and special occasions.

The lower levels of Terminal Tower contain shops, restaurants and an 11-screen cinema. Called Tower City Center, the complex has a food court with eateries like Nathan’s Famous and McDonald’s. The Hard Rock Cafe at Tower City serves the brand’s signature burgers, fries and shakes. For groups it offers a package that includes admission to the Rock and Roll Hall of Fame. The restaurant has its own collection of rock music memorabilia, from a Rolling Stones guitar to Madonna’s shoes.

Creating the latest buzz at Terminal Tower is Horseshoe Cleveland, a full-service casino that opened last year in the former Higbee’s department store. Highlights include 1,900 slots, 89 table games and a buffet called The Spread. 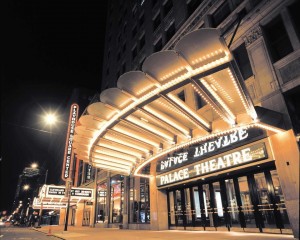 A walk down Euclid Avenue leads to PlayhouseSquare, a cultural magnet centered around five restored theaters. On almost any night you can catch a Broadway show, Shakespeare play, concert, opera, ballet, play or top comedian. The Great Lakes Theater Company and Cleveland Playhouse, among the top regional theater companies in the country, provide a wide variety of fare. All five theaters—the Allen, Ohio, State, Palace and Hanna—were built between 1919 and 1921 as vaudeville or movie theaters. They closed in the 1960s but were saved from the wrecking ball; renovations began in the ’70s. Theater tours can be arranged.

Not far from PlayhouseSquare are Progressive Field (Cleveland Indians) and Quicken Loans Arena (Cleveland Cavaliers). Tours of Progressive Field include a dugout, the visitors’ clubhouse, bullpen, indoor batting cages, press box and exhibits on the team’s past. Quicken Loans Arena, or “The Q,” is also home to the AHL Lake Erie Monsters and arena football’s Cleveland Gladiators and hosts major concerts.

Many of Cleveland’s cultural institutions are clustered in the University Circle area, a few miles east of downtown. The Cleveland Museum of Art (free general admission), undergoing an extensive renovation and expansion, spans 6,000 years of art, offering everything from Egyptian antiquities to French Impressionists and modern American art. You can view vintage cars and planes at the Crawford Auto Aviation Museum, part of the Western Reserve Historical Society, which also encompasses The History Museum. Also in Universal Circle are Cleveland Botanical Garden, which has a conservatory that houses the ecosystems of the Madagascar desert and Costa Rican rainforest; the new Museum of Contemporary Art; Cleveland Museum of Natural History; and magnificent Severance Hall (home of The Cleveland Orchestra) on the campus of Case Western Reserve University. 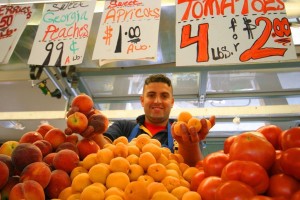 The West Side Market, one of America’s great historic food halls, is a favorite with tour groups and Cleveland residents. More than 100 tenants sell everything from meats and fish to spices, nuts and baked goods. Many stalls have remained under individual family control for much of the life of the market—a few dating back to its 1912 opening. Architecturally distinguished by its vaulted, tiled ceiling and landmark clock tower, the market makes a great lunch stop. Many vendors offer free samples, or your group can eat its way through the market with Taste Cleveland Food Tours and meet its colorful entrepreneurs at the same time.

Fans of A Christmas Story will want to visit the Christmas Story House, the restored house used in the classic 1983 movie about a 9-year-old boy who wanted an air rifle for Christmas. The companion museum across the street has props, costumes and other movie memorabilia, including Randy’s snowsuit and the family car.

Cleveland, as more and more tour planners are discovering, comes as a neatly wrapped package full of goodies for groups of all ages. While the lakefront certainly has summertime appeal, groups will find merriment here any time of the year.