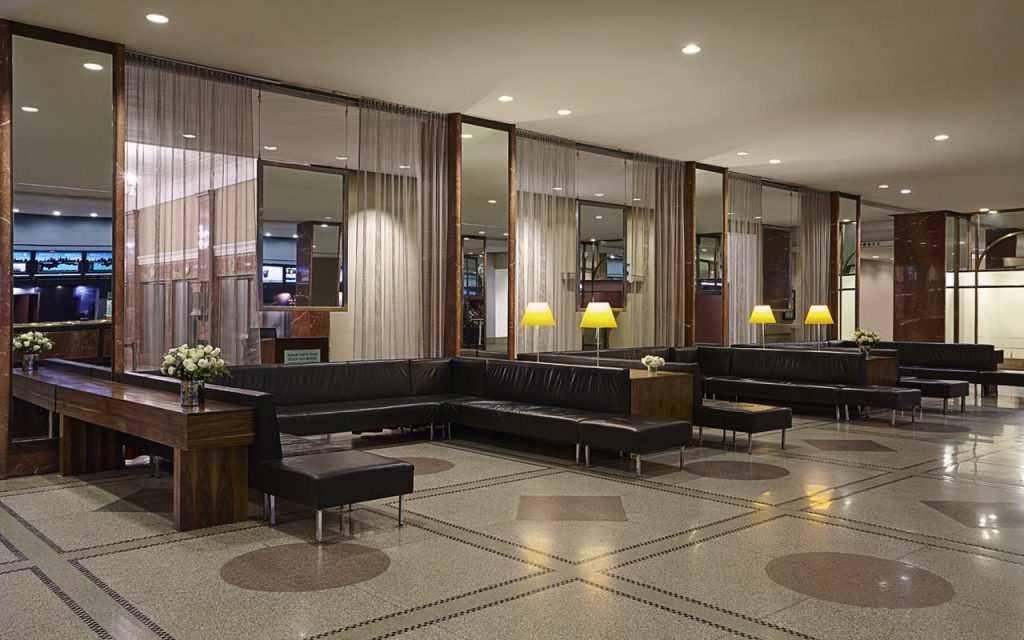 New York history echoes throughout the grand, red-marble lobby and long, long guestroom corridors of the Hotel Pennsylvania, a fixture at Seventh Avenue and 33rd Street, right across from Madison Square Garden. Upon opening in 1919 it was the largest hotel in the world, boasting 2,200 rooms; now with 1,700 units, it remains an imposing presence on the local hotel scene, ranking as the city’s fourth largest.

Despite its age, the venerable Hotel Pennsylvania is pretty frisky and still has a skip in its step. Just ask all the dog owners who flock there every February during the prestigious Westminster Kennel Club Dog Show, held at Madison Square Garden. The Midtown hotel caters to large tour groups year-round. Though it’s large in size and located in a hard-edged city, I found the staff to be extremely personable, more than willing to accommodate every need. Front office manager Peter M. Gallo could not have been kinder, and all the front desk people were obviously there to serve. It was smiles all around, around the clock. 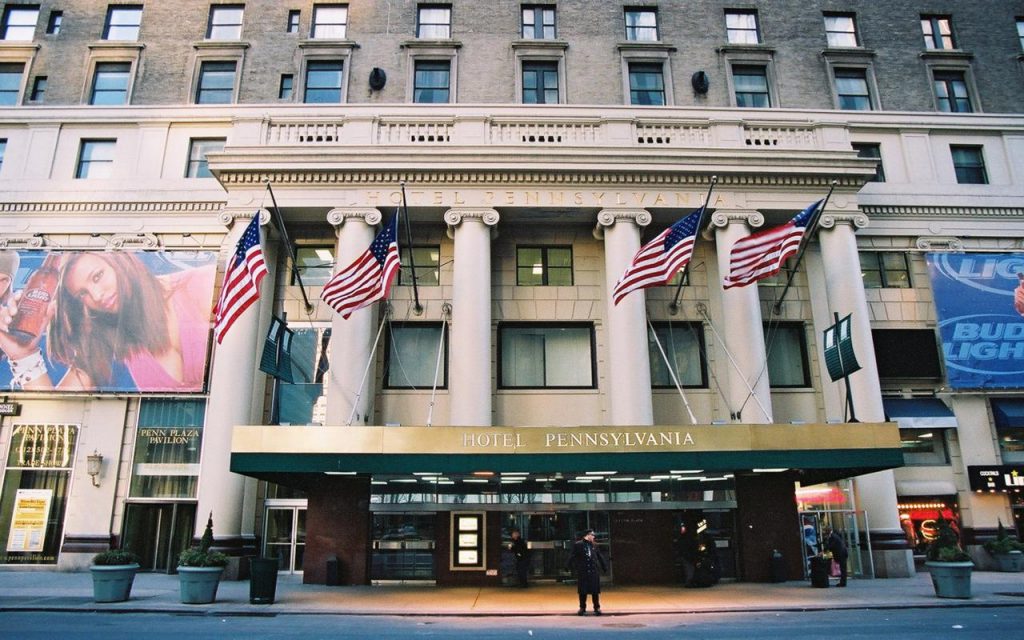 Those who remember the Big Band era know the Hotel Pennsylvania as the home of Cafe Rouge, once the hotel’s main dining room, which played host to greats like Tommy and Jimmy Dorsey, Count Basie, Duke Ellington and Glenn Miller. It was the Glenn Miller Orchestra that immortalized the hotel and its phone number in the 1938 Jerry Gray composition “Pennsylvania 6-5000.” To this day, the hotel has the same number (212-736-5000) since opening, reputedly the longest-running single phone number in New York. The space occupied by Cafe Rouge, once the world’s largest hotel restaurant, is now a private basketball court owned by Michael Jordan and used for special occasions, with a separate entrance from the street. Its beamed ceilings, a floor-to-ceiling fountain and architectural flourishes remain.

The stately brick-and-limestone hotel was designed by McKim, Mead & White, a prominent firm commissioned by the Pennsylvania Railroad. The firm also designed the original Waldorf-Astoria, the temple-like Eighth Avenue Post Office and the original Pennsylvania Station. (The exterior of the Hotel Pennsylvania’s first four floors was designed to complement the since-demolished station.) A modern incarnation of the storied train station is located across from the hotel, a convenient choice for travelers arriving on Amtrak. Tourist magnets like the Empire State Building and Macy’s department store are just blocks away, and all the excitement of Times Square is an easy jaunt.

I stayed in one of the hotel’s beautifully updated Penn 5000 rooms. The newly tiled bathroom gleamed with new fixtures, and the blond wood furniture and doors lent a contemporary vibe. The velvety maroon throw pillows, bed covering and easy chair added a touch of plush. Penn 5000 amenities include a mini-refrigerator, flat-screen LED TV and work desk with ergonomic chair. The hallways on my floor also had been modernized, sporting scenes of city lights and overhead orange light panels. 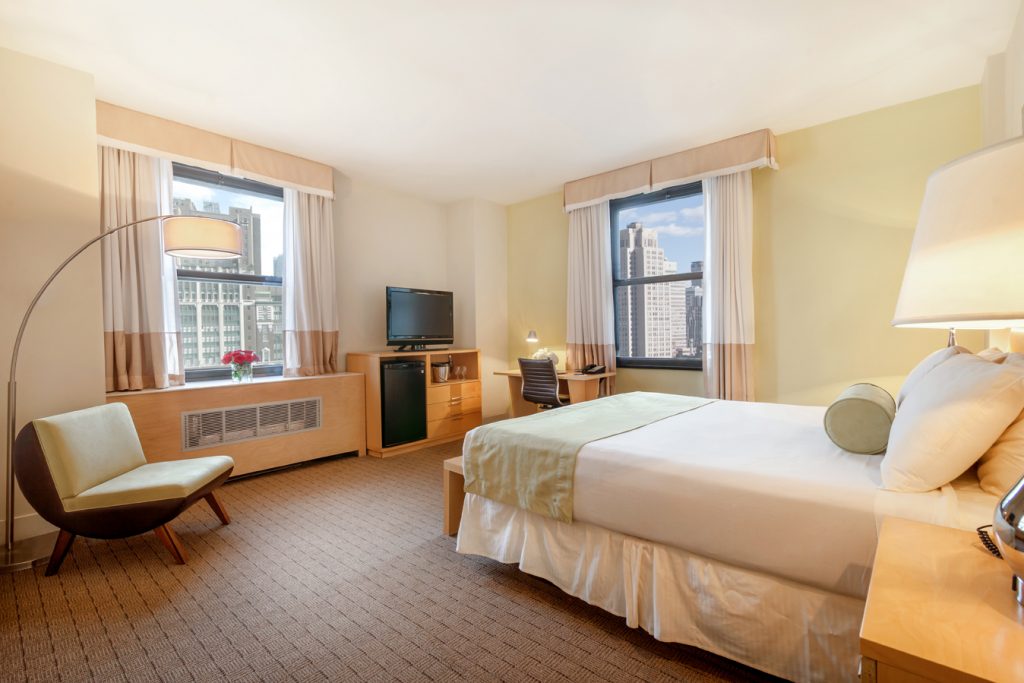 Not all floors, however, have the new look yet. I took a peek at the floor below and was fascinated by the long hallways with door after door equipped with a quirky innovation of the time. The Servidor, or Valet Door, was a wardrobe box on the room door in which guests could put clothes or shoes from inside the room and have them “noiselessly extracted by an attendant from the outside and returned pressed and shined,” as described by a New York Times reporter reviewing the new hotel. Or hotel employees could drop off room-service items or newspapers without disturbing the guest. A signal on the “silent servant” showed instantly when an object was placed in it. Clearly a blast from the past, the Servidors have not been used for decades but bear a small metal plaque extolling their historical significance. The Hotel Pennsylvania is the only place where they still exist.

The host hotel of the Westminster Dog Show is pet-friendly year-round, welcoming dogs of all sizes and cats, too. During the annual show, it hosts events like the New York Pet Fashion Show and has a doggie spa that offers bathing tubs, a grooming area, exercise area and in-house relieving area.

Human guests of the Hotel Pennsylvania make use of the in-house fitness center and have privileges at Bally’s, located next door, which features a full-size gym, sauna and steam room. 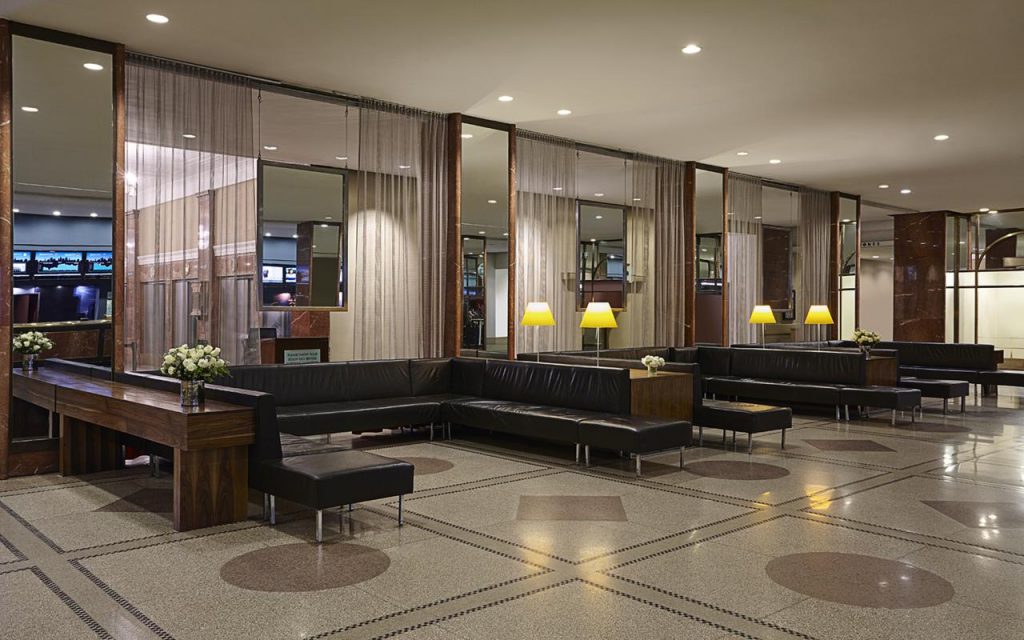 Restaurants inside the hotel (but operated independently) include The Statler Grill (named after the hotel’s builder, E.M. Statler) and the lobby’s 24-hour coffee shop, City Perks. Also in the lobby is a sightseeing, theater and travel reservations desk.

A historic landmark with an enviable location, the Hotel Pennsylvania is an obvious choice in Midtown Manhattan.

Group rates are available for eight rooms or more. For information, visit www.hotelpenn.com.