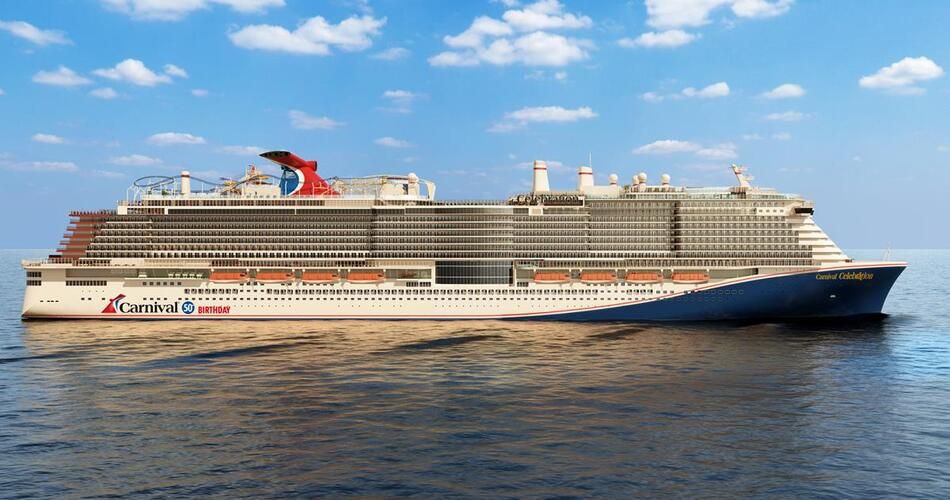 Carnival Cruise Line’s new cruise ship, the Carnival Celebration, was christened on November 20 at PortMiami, with actress Cassidy Gifford doing the honors. The naming ceremony was the perfect culmination of Carnival’s year-long celebration of 50 years of fun. An innovative Excel-class sister ship to the Mardi Gras, the Carnival Celebration set sail the next day on her inaugural voyage, a special six-day Thanksgiving cruise, the first of year-round sailings from Miami. 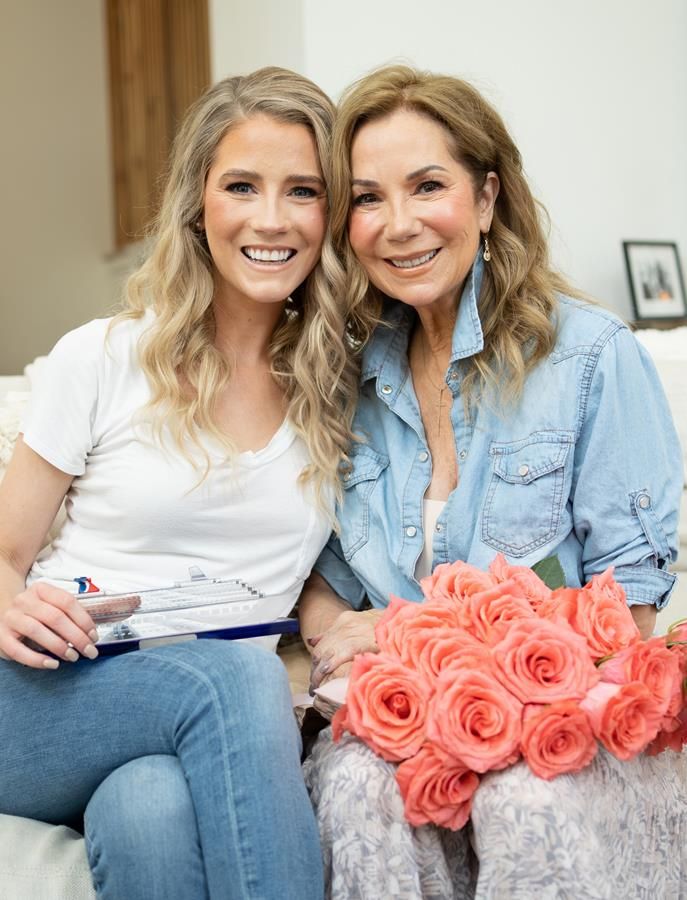 Attendees enjoyed a performance by Kathie Lee, who sang the memorable tune from the now legendary commercials that helped popularize the Carnival brand in the 1980s. Festivities also included a preview of the Carnival Celebration’s spectacular entertainment, including an aerialist performance. A concert by Kool & the Gang topped off the evening. They sang their dance classic song “Celebrate!”

The 180,000-gross-ton Carnival Celebration, at 1,130 feet long, accommodates 6,465 guests at full capacity. She features more than 20 dining venues and a dozen lounges and bars across six themed zones. Atop the 17-deck new cruise ship is the all-electric roller coaster BOLT: Ultimate Sea Coaster.

Zones include Celebration Central, 820 Biscayne, The Gateway, La Piazza, Lido, and The Ultimate Playground. Each of these themed areas features new dining, entertainment, and attraction experiences. 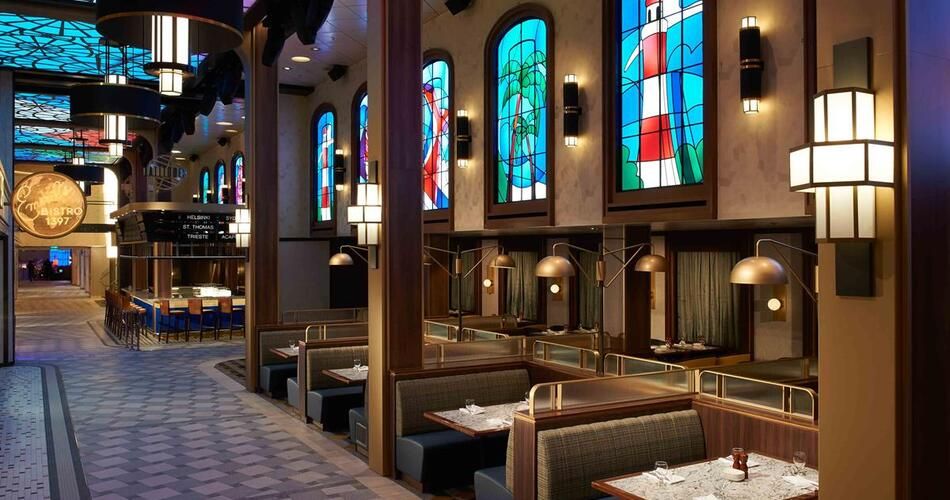 The Gateway, a first of its kind, offers a truly immersive experience, transporting guests to faraway destinations by offering cuisines that complement the visuals shown on 12 virtual “windows” surrounding the space. The zone’s 100-foot-long LED ceiling, sound effects, and theatrical lighting combine to create an ever-changing environment inside a two-deck-high promenade.

Among the restaurants on this new cruise ship are several that involve celebrity partners. They include:

Latitudes, located in The Gateway zone, is a new travel-inspired bar concept. It evokes a classic airport or train station with a modern take on a vintage “departures” board. Other bars include Bar 820, Golden Jubilee, Aqua Bar, RedFrog Tiki Bar, Heroes Tribute Lounge, Alchemy Bar, Piano Bar, The Watering Hole, Havana Bar and Pool, and the Tides and Serenity pool bars.

Entertainment on This New Cruise Ship

“The Most Magnificent Circus” unfolds to reimagined popular hits as a big-top circus comes to life. “Color My World – An Indie Rock and Pop Love Story” blends dance styles with the tale of a popular artist and his assistant going on a journey of love. “Visual Symphony” is an innovative classical rock show that uses Celebration Central’s massive 16 LED screens and lasers. “Rio Carnival” is a vibrant, high-energy Brazilian extravaganza.

Where This New Cruise Ship Sails 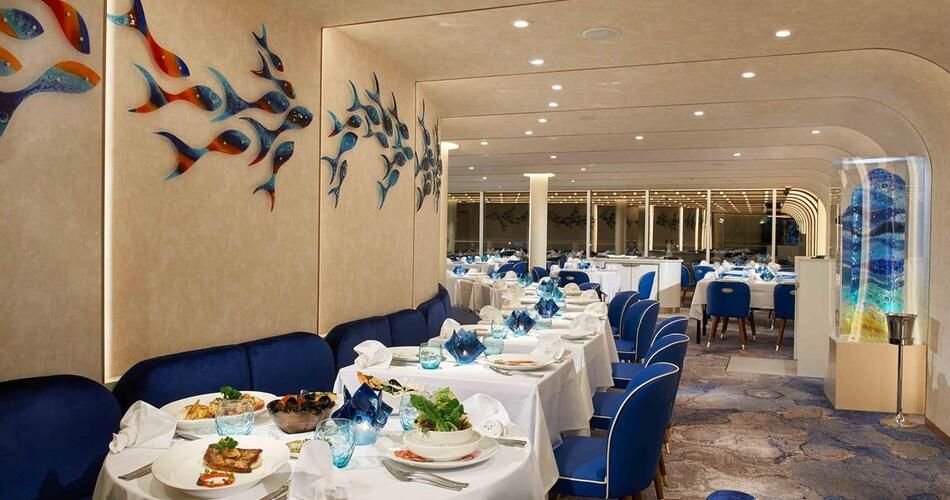 Rudi’s Seagrill, a fine dining restaurant on the Carnival Celebration

The Debut of Terminal F at PortMiami

On the day of the Carnival Celebration’s naming ceremony, Carnival Cruise Line did a ribbon cutting to mark Terminal F’s grand opening. The new facility allows exceptional flexibility to accommodate Carnival’s newest class of ships. The terminal also maximizes technology so guests can move through the embarkation process quickly while enjoying a more seamless boarding experience. Digital media experiences are built into the three levels of the new terminal and include an immersive tunnel that guests pass through.

Ahead of the ribbon-cutting ceremony, Christine Duffy, president of Carnival Cruise Line, announced a special $25,000 donation from Carnival to the Miami Veterans Affairs Healthcare System. The donation will support medical and health services to more than 6,000 women veterans in Miami-Dade.

Carnival Cruise Line, which began in 1972, has been celebrating its 50 years of fun throughout 2022. It is the largest cruise company in the world, based on the passengers carried, and the flagship brand of Carnival Corporation & plc. 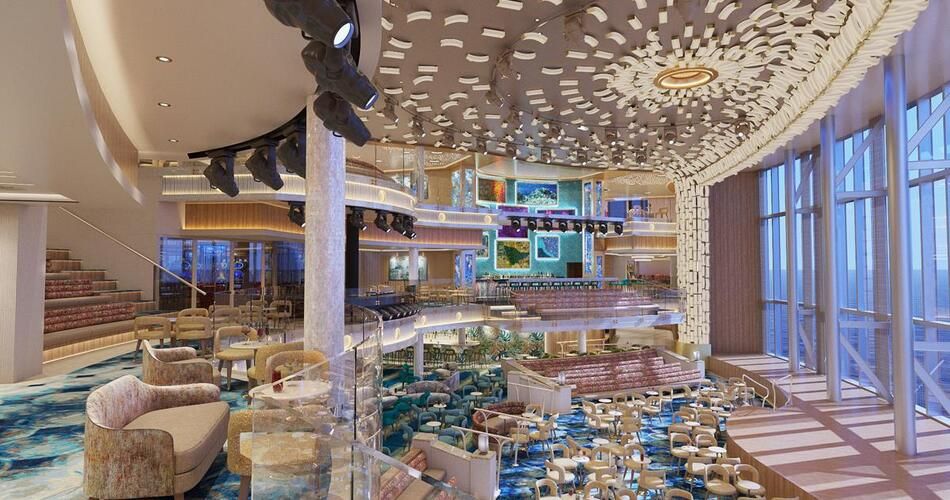 The Carnival Celebration is the second ship in Carnival Cruise Line’s fleet that operates on a Liquified Natural Gas (LNG) propulsion system. It is part of Carnival Corporation’s pioneering green cruising platform.

Carnival Cruise Line is definitely a great choice to consider when planning your next group cruise.

Cindy Bertram has 15+ years of cruise industry expertise in marketing, content creation, sales, and training, as well as social media. Her MBA from Loyola University Chicago complements her high creative edge and liberal arts BA. She can be reached at cindy@ptmgroups.com.