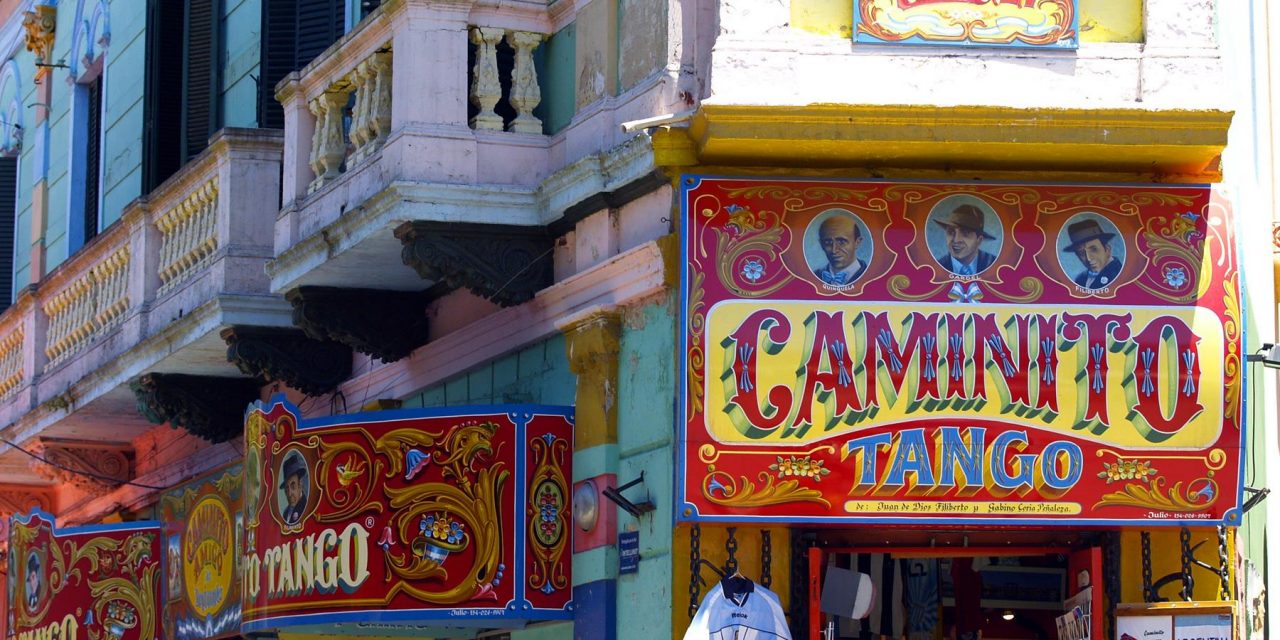 Countless diversions await in every corner of Argentina’s capital

These are among the key words that flavor a visit to Buenos Aires, a city of many passions. I recently had a week to explore BA but only scratched the surface of this multi-layered metropolis of distinct neighborhoods, six of which I had a chance to sample.

Here is a look at neighborhoods I visited:

Microcentro, the city’s historic heart, is the ideal place to begin a tour of Buenos Aires. A trio of landmarks centered on Plaza de Mayo—Catedral Metropolitana, Casa Rosada and the Cabildo—are all worth a visit.

The cathedral provides some welcome quiet from the city streets. A beautiful space resplendent with marble walls, frescoed ceilings and mosaic floors, Argentina’s most important church, dating from 1580, is familiar ground to Pope Francis, who became the archbishop of Buenos Aires in 1997 and a cardinal in 2001. Born Jorge Mario Bergoglio in BA in 1936, he took the name Francisco upon assuming the papacy, as a simple photo display near the entrance explains in Spanish. The church gift shop sells plaques and key chains bearing the pontiff’s image. One room in the cathedral, with two soldiers keeping watch, holds the tomb of General Jose de San Martin, who led the country’s drive for independence from Spain.

The whitewashed Cabildo, where the town council once met, is a museum with exhibits on the Spanish colonial period and events leading up the 1810 revolution in BA that resulted in Argentina’s declaration of independence in 1816.

Across Plaza de Mayo stands the reddish Casa Rosado, the presidential palace. Argentine President Juan Peron and his wife, the glamorous and controversial Eva, addressed union members and other supporters from its balcony in the late 1940s and early ’50s. The plaza today hosts political rallies, protests and jubilant celebrations. 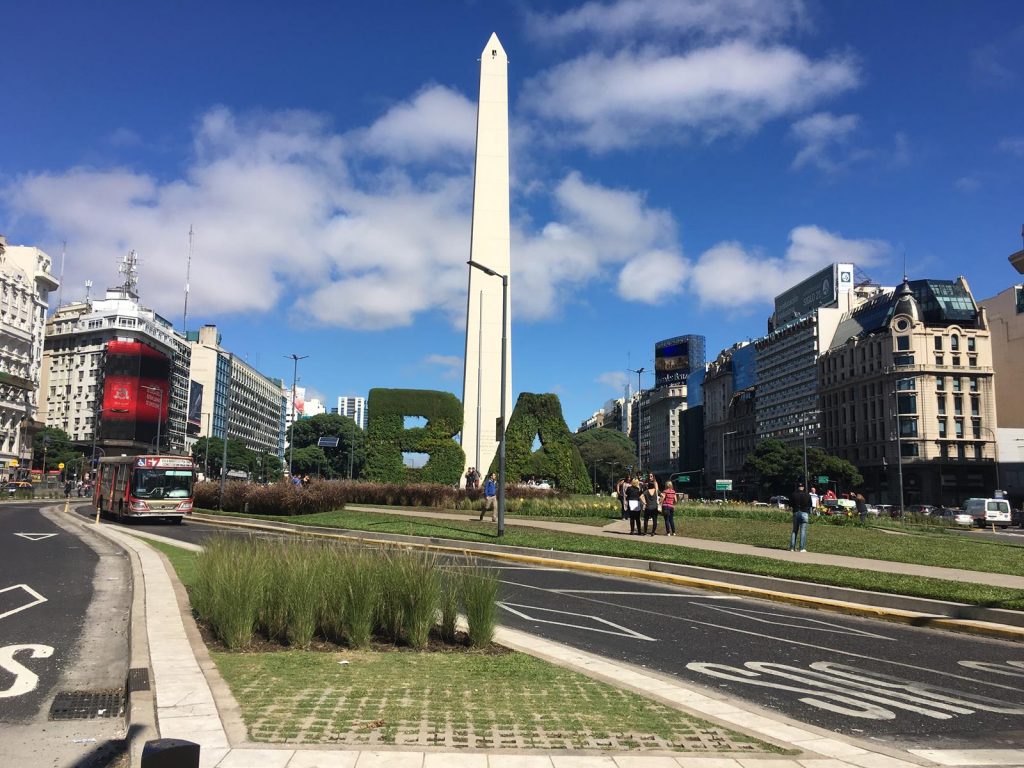 The white, needle-like Obelisk in the middle of Avenida 9 de Julio is another city-center focal point, a gathering spot for celebrating soccer victories. The avenue itself is something to behold. With 16 lanes for car traffic and four for buses, it’s one of the widest streets in the world. 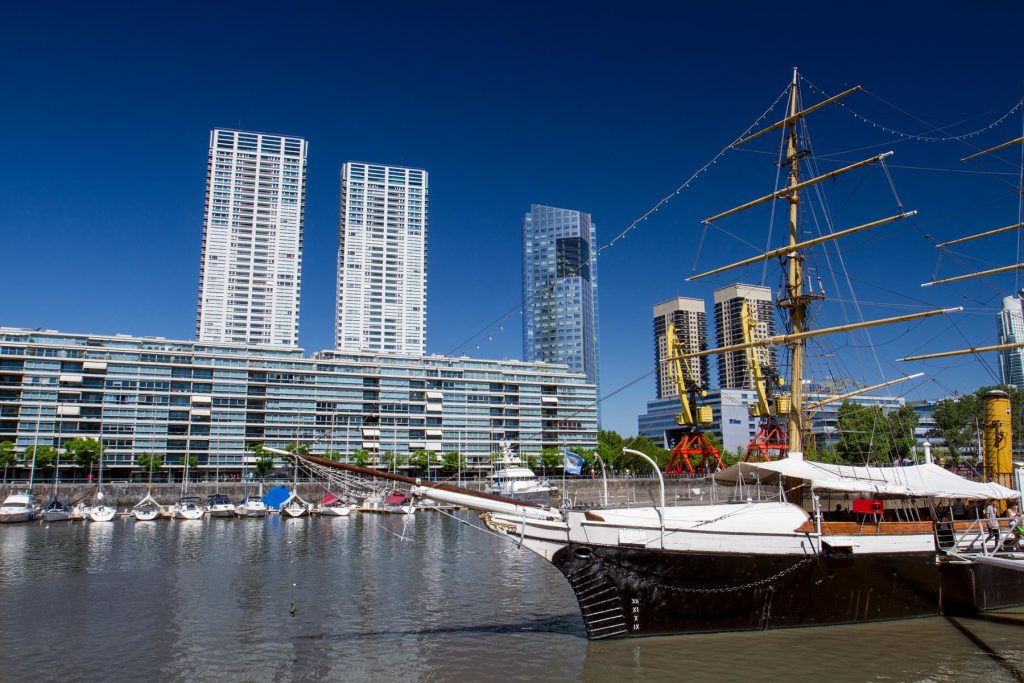 It was in Puerto Madero where I had my best Argentine steakhouse (parrilla) experience, a must for any meat lover. Unbelievably flavorful and tender, the country’s fabled beef is second to none. To try various cuts, order a parrillada (mixed grill). The beef will be served with a side of chimichurri, a simple condiment made from herbs, vinegar, garlic and olive oil.

Visions of Parisian architecture are clearly evident in the Recoleta district, with its fancy hotels and apartment buildings, embassies, and high-end boutiques and art galleries. On a free walking tour offered by the Buenos Aires tourism office, I got a feel for this aristocratic enclave.

One stop was Recoleta Cemetery, a major attraction renowned for its maze of avenues lined with elaborate mausoleums built as shrines to the rich and famous. The most visited tomb is that of Eva Peron, the controversial first lady who made a name for herself in the late 1940s and early ’50s as a social reformer.

Besides walking the streets, another way to soak up atmosphere in Recoleta is sitting down at La Biela, a classic cafe and bar that got its motor running in the 1950s as a hangout for race-car champions, who mingled there with intellectuals, artists, politicians and tourists; one wall sports black-and white photos of long-ago auto races. With old-school touches like wood paneling and waiters in vests and bow ties, La Biela has the feel of a Viennese coffeehouse. 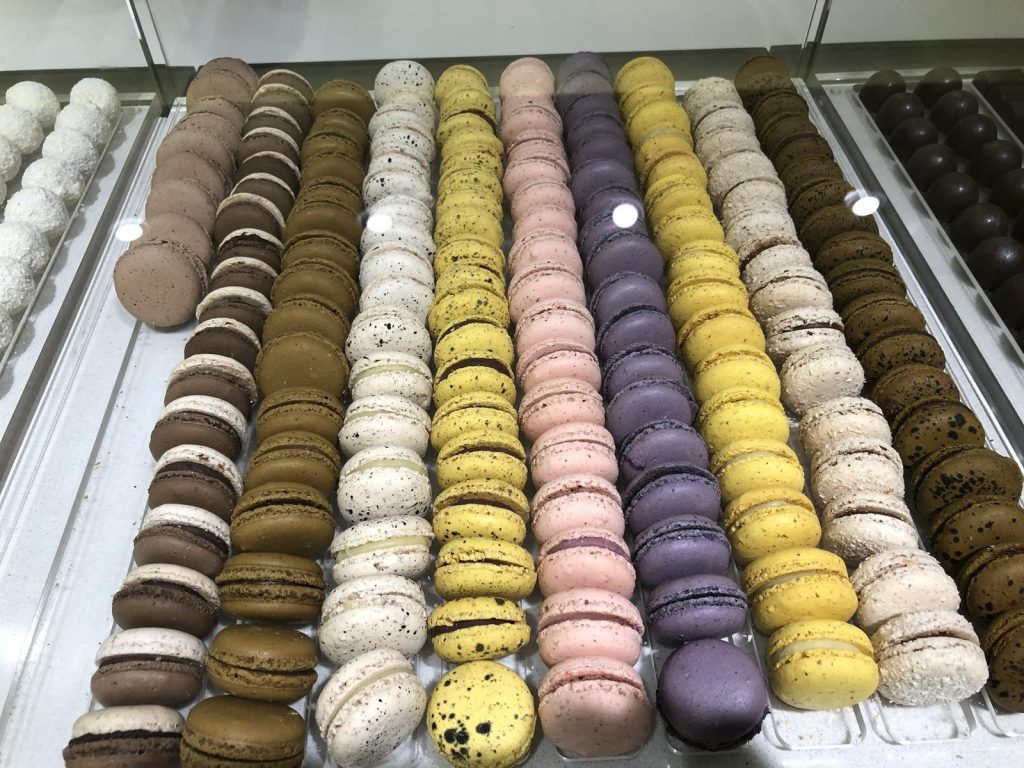 One night I stayed at Palacio Duhau Park Hyatt, a Recoleta luxury hotel that artfully marries a modern, 13-story tower and a five-story, 1930s mansion. My room looked out on the fountains and greenery of the formal garden tucked between the buildings. Even if you don’t stay there, consider breakfast or lunch in the mansion’s salon or outdoors on the garden-facing terrace. For gourmet chocolates or exquisite macrons in a rainbow of colors, find Duhau Patisserie. 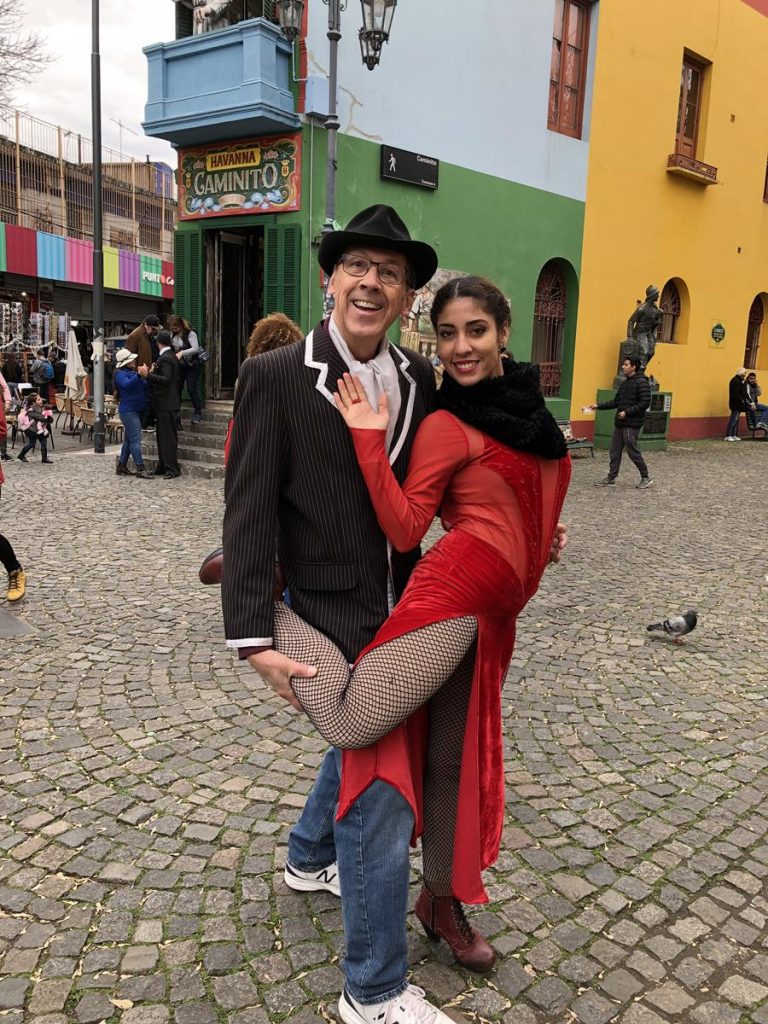 Tourist hams it up with a “tango dancer,” one of many solicitors along El Caminito. (Chuck Mink Photo)

If I could visit just one Buenos Aires district, it would be San Telmo, where urban glitz gives way to narrow, cobblestone streets with gaslight-style lamps, low-rise colonial buildings and a feeling of authenticity. A bohemian neighborhood attracting young, creative types, San Telmo is where that sensual and melancholy dance, the tango, was born in the late 1800s and where you can find milongas (dance halls) that attract more locals than tourists. The neighborhood, a 20-minute walk from the city center, is packed with shops purveying antiques, collectibles and crafts. Start your explorations at San Telmo Market, a labyrinth of stalls and food counters under an iron roof erected in 1897.

In San Telmo dulce de leche stores, I sampled different brands of the milk-caramel spread to my heart’s content; most places had 15 or 20 open containers in which to dip a tiny plastic spoon. Dulce de leche shows up in all types of desserts and pastries, including churros, donuts and flan.

For outdoor action in San Telmo, make a beeline to Plaza Dorrego, a festive, tree-shaded square hosting food and crafts vendors. Open-air restaurants stage tango performances from noon to 6 p.m. every afternoon except Sunday, when a street fair takes over the city’s second-oldest plaza.

Near the Riachuelo riverfront in the working-class barrio of La Boca, you’ll capture your most colorful Buenos Aires photos on a stroll down El Caminito, a cobbled pedestrian way with brightly painted buildings clad in corrugated metal. Once tenement housing for Spanish, Italian and other European immigrants who arrived more than a century ago, they have been repurposed into stores and restaurants for the tourist trade. Come prepared to encounter street artists and performers. I paid $5 to don a costume and do several poses with a dolled-up “tango dancer.” Some shops provide Pope Francis statues for your picture-taking pleasure. 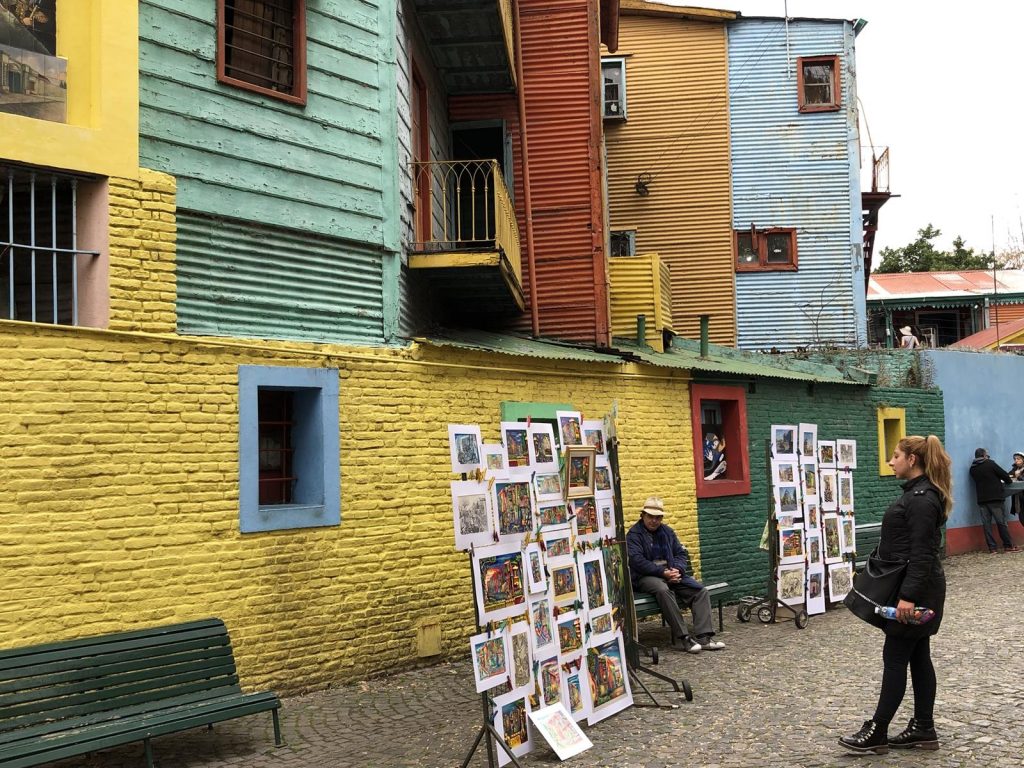 From the waterfront’s tourist information kiosk, I joined a free, 90-minute guided walk that included the stories behind El Caminito’s color-splashed houses and the soccer stadium where the renowned La Boca Juniors compete before die-hard fans. 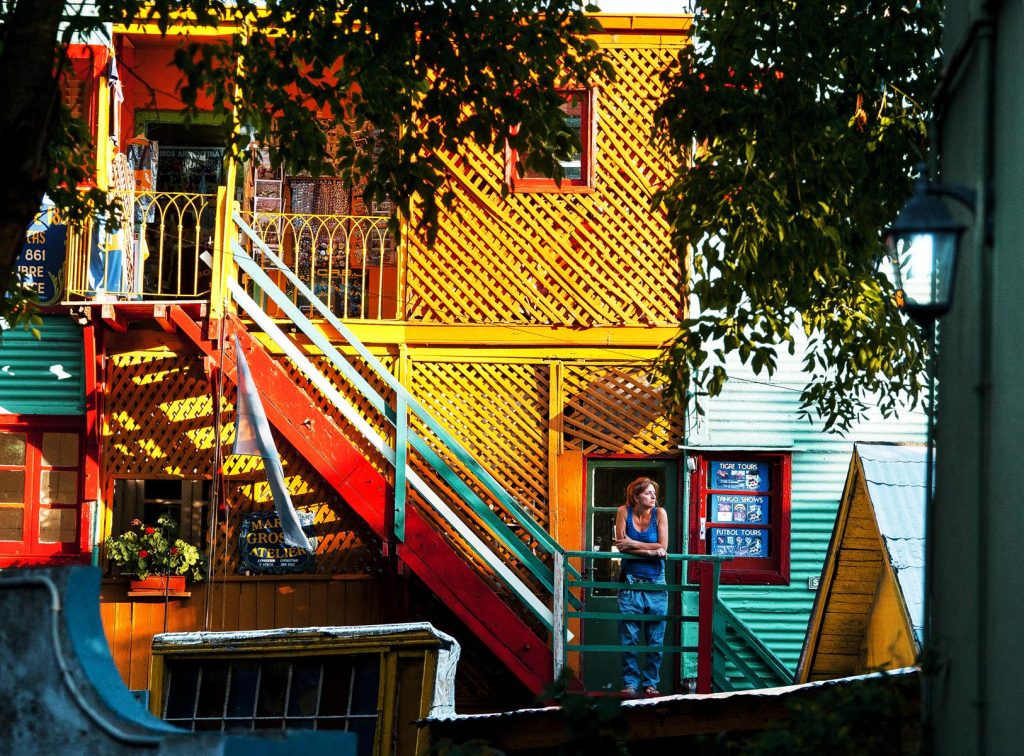 Before important maritime activity shifted to Puerto Madero in the 1920s, La Boca was the city’s main port area. Many early residents had been shipyard workers in Genoa and other seaports in Italy.

Italians’ culinary contributions to Argentina are mirrored in the popularity of pizza, pasta and other common menu items at restaurants of all types. During my visit, I could never get enough of the pizza, which tends to be thick and doughy with lots of gooey mozzarella but scant tomato sauce. Most pizzerias serve a chickpea flatbread called faina (also Italian-influenced) and empanadas, pastry turnovers (fried or baked) with fillings like ground beef, chicken and sweet corn.

One day for lunch, I polished off a bowl of sorrentinos, circular, ravioli-like pillows filled with ham and cheese and swimming in a buttery white sauce. Another favorite discovery: milanesa neopolitana, a breaded veal cutlet topped with tomato sauce, ham slices and melted cheese. You can also thank the Italians for the country’s delectable helado (ice cream). Similar to gelato, it’s some of the best anywhere.

Know Before You Go