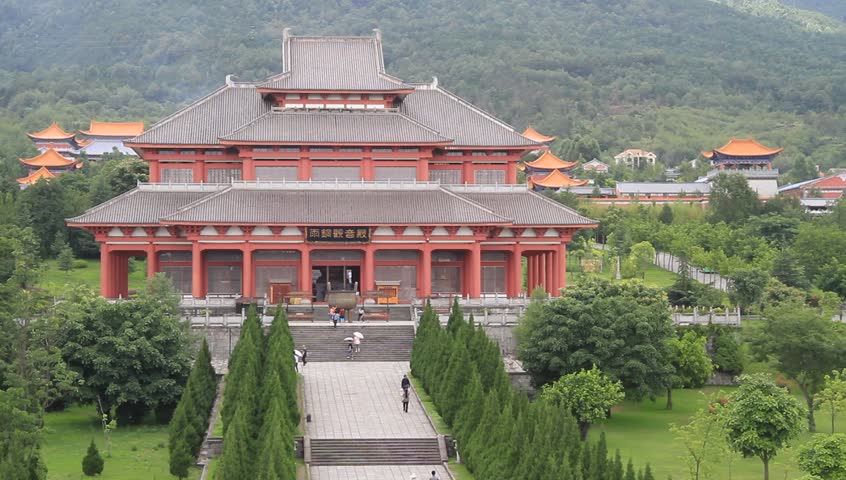 China, in its earlier days, was known as the land of the “three teachings”: Confucianism, Taoism and Buddhism. This trio of religions demonstrated powerful effects on China’s cultural progression and have since been joined by folk religions, Catholicism, Protestantism and Islam in more recent years. You will find that the churches, burial grounds and dynastic temples you stumble upon during their trip reflect this formation of eclectic Chinese civilizations.

You won’t fall short of opportunities for learning and excitement when you walk through ornate temples and modest burial grounds. In addition to preserving religious teachings, buildings and statues honor the lessons harnessed within nature’s beauty. Embark on walking tours all over small villages and bustling cities. Many temples co-exist among forests. Others are located alongside China’s interconnected rivers. It’s almost as if there is religious meaning everywhere – and it’s up to you to soak it all in. Here are some must-see sights to visit on your next religious trip to China.

Constructed in 1694 during the Qing Dynasty, this bright red 16-acre Buddhist temple accented in rainbows of colors was once home to a future king. Emperor Yongzheng resided in the temple during his years as a prince before ascending to the throne. In 1744, however, the temple’s status changed to become a lamasery and eventually became the national center of the monks’ Lama Administration. Today, the Lama temple is known for being the largest Lamasery in Beijing. Given its impeccable condition, visitors can view the monastery, which still possesses some of the prince’s belongings. Religious groups can conveniently take the subway to this destination, as the monastery is the only temple in Beijing that has its own subway stop.

Kaifeng traces the Jewish population back to its earliest migration to China. Jews are said to have taken the Silk Road to China from Central Asia – possibly India—and built Kaifeng Synagogue between CE 960-1279. Angry natives destroyed the synagogue in 1860, and it has never been rebuilt, but many Jews still tour the area and visit Chinese Jewish community centers and the Kaifeng Museum.

For those longing to explore a variety of religious buildings, you can visit a 108-year-old synagogue that the city of Harbin re-opened in 2014. The crimson building located 18 hours north of Kaifeng features European architecture and can hold up to 800 people, making it one of the largest synagogues in northeast China. It often hosts festivals honoring the Chinese Jewish population, as Harbin once sheltered the group’s largest population in the Far East between the two World Wars in addition to opening the country’s first Jewish cemetery in 1903. The Harbin Jewish History and Culture Exhibition is open to any visitors who wish to enrich themselves with more knowledge of the sight’s history.

The Temple of Heaven is aptly named for being the place where Heaven and Earth meet. Located in central Beijing, the 675-acre complex is often called the Taoist Temple. The temple was completed in 1420 and, for 500 years was where emperors from the Ming and Qing dynasties continuously sacrificed and prayed for prosperous harvests during the summer solstice. Ceremonial traditions for priests who worshipped at the Temple of Heaven included processing in secrecy, wearing opulent robes and abstaining from meat. Soldiers later occupied temple grounds during the Second Opium War and the Boxer Rebellion.

Architecturally, the Temple is filled with meaning. The grounds comprise three philosophical structures all constructed under navy rooftops: the Imperial Vault of Heaven, the Circular Mound Altar and the Hall of Prayer for Good Harvests. Visitors can spot circular and square symbols representing the Sun and Earth, respectively, amid rainbows of walls, pillars and ceilings. The Hall of Prayer for Good Harvests even incorporates pillars representing the four seasons and Chinese hours to keep the emperors’ summer solstice tradition intact.

Long before being twice rebuilt, Beijing’s Eastern Church was an apartment for the first priests to practice Christianity in 1655 before taking off with smuggled silkworm eggs to the Eastern Roman Empire. Together they constructed the first church, Saint Joseph’s Church, which was later decimated under several earthquakes. The final product was rebuilt on the first church’s old ruins in 1904 towards the end of the Qing Dynasty. Though named the Eastern Church, the building’s façade faces west. The replacement underwent more large-scale repairs and maintenance in the 1980s, but since then has been a hub for religious tourists. Visitors are instantly drawn to Eastern Church’s gorgeous white and gray Romanesque architecture, engraved symmetrically with biblical symbols. Visitors can also attend daytime and evening services. The church is beautifully lit during celebratory occasions like Chinese New Year.

This impressive Buddhist site in Luoyang includes over 2,000 caves and about 60 pagodas, all of which together stretch for a half-mile along the west bank of the Yi River. The grottoes are additionally dubbed “Dragon’s Gate Grottoes” due to the resemblance of two converging hills on the Yi River to Chinese gate towers. The caves and pagodas are filled with over 100,000 limestone-carved Buddhist statues.

Given its current vastness, the grottoes’ construction occurred in four phases between 493 AD and 1127 AD. The beginning of their construction marks Emperor Xiawen of the Northern Wei Dynasty’s decision to make Luoyang the new capital. The second phase brings about the Longmen Caves with carvings of Northern Wei style. The following phases, as a result, also honor the time periods in which they were developed and the royals who reigned. The grottoes have undergone extensive restoration since the 1950s to remain as prominent Buddhist worship sights. Travelers can still find hundreds of inscriptions on the walls revealing stories of the time along with artists’ authentic calligraphic inscriptions.

Like so many other religious sights all over China, Guangzhou’s Huaisheng Mosque was built many times over before it finally stood resolute. Also known as the Lighthouse Mosque and the Great Mosque of Canton, this religious destination is the eighth oldest Islamic site in the world and is one of the most well-known sites in southeastern Asia. Old Chinese manuscripts reveal that Sa’d ibn Abi Waqqas, a trusted companion of the Islamic prophet, built the first mosque in 627 AD on what may have been his first Muslim mission to China. The mosque survived the Tang and, possibly, the beginning of the Song Dynasties before being reconstructed in 1350 and in 1695. Today, visitors can take an easy walk through Guangzhou to get to the mosque. Many can identify the 118-foot, minimalistic minaret as they walk in its direction.

While the most renowned Confucius temples are located in Beijing and in Qufu, the Nanjing Confucius Temple also boasts a deep history that should be explored. This temple was first constructed during the Song Dynasty in 1034 before repeatedly suffering massive destruction, including its most recent devastation in a fire caused by Japanese insurgents in 1937.

The most modern version of the temple embodies architectural styles from the Ming and Qing Dynasties and now features a China Imperial Examination Museum and Xue Gong, otherwise known as the Imperial Academy. The entire complex honoring China’s most prolific philosopher is infused with nature, as it sits alongside the Qin Huai River. Most travelers revel in the temple’s 120-yard long screen wall while touring the area. Besides the temple, museum and the academy are the must-see Dacheng Hall. Inside, religious groups will find China’s largest figure of Confucius and a marvelous collection of 38 brightly colored panels of jade, silver and gold. Altogether they depict Confucius’ life and are coupled with white marble statues of his eight disciples.

Mausoleum of the First Qin Emperor

It’s not hard to spot Emperor Qin Shi Huang’s ornate 76-meter-tall pyramidal tomb and mausoleum while touring the Chinese province of Shaanxi. The entire sight began when the emperor was just 13 and carried on for the next 38 years, from 246 to 208 BC. Emperor Qin Shi Huang died during one of his tours of Eastern China from ingesting mercury pills that, ironically, were supposed to protect and immortalize him. The tomb itself covers an underground palace where bronze chariots and horses and realist terracotta figureheads depicting Emperor Qin Shi Huang’s armies are said to be preserved. While visitors can tour the outside of the tomb, some of the Terracotta Army to its eastern side and the surrounding province, they are unable to explore the underground palace due to the risk of harming the emperor’s possessions.