Looking out on the waves and endless blue expanse from my balcony brought back memories of being on a cruise ship in the middle of the ocean. In this case, the vast inland sea was Lake Michigan. My spacious “stateroom” was one of 182 in a rambling white structure harking back to classic Victorian resorts on the East and West coasts.

Sporting maroon-shingled roofs and cupolas, Blue Harbor Resort and Conference Center reminds me of the classic Hotel del Coronado near San Diego and The Grand Floridian at Walt Disney World. But this eight-year-old waterpark resort occupies a former industrial site in Sheboygan, Wis., so don’t expect palm trees and balmy weather year round.

You will, however, find a sandy beach and surfers. In fact, surfing conditions are so favorable on this stretch of coastline that Sheboygan has been called the “Malibu of the Midwest.” It hosts the Dairyland Surf Classic every Labor Day weekend. 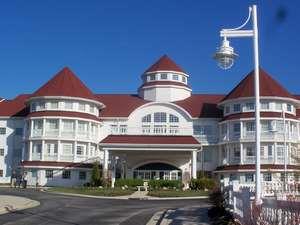 Blue Harbor Resort offers more accessible beachfront (one-third mile) than any other resort on Lake Michigan. It was too cold to swim on my April visit, but I did see a sailboat on the horizon and one intrepid paddle surfer.

Blue Harbor strongly appeals to families and youth groups. Breaker Bay waterpark features slippery slides, a swimming pool with basketball nets, a lazy river, spacious whirlpool and plenty of devices that dump, shoot and squirt water. There’s even a giant tipping ship that dumps 1,000 gallons on those who dare to endure the drenching onslaught. On my weekend visit there was a large contingent of Wisconsin United Methodist youth—one night they got the waterpark to themselves after closing time. The park has a snack bar and game arcade/swim shop.

The resort, less than an hour north of Milwaukee, also attracts couples and girlfriend groups seeking a lakeside getaway. Guests can chase their cares away at Reflections Spa, which offers facials, massages and other treatments. 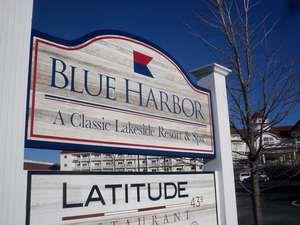 Fresh from a multi-million-dollar renovation, Blue Harbor shines with a new look. The elegant lobby, which once had a grand staircase blocking the view, now takes full advantage of the waterfront setting, affording Lake Michigan panoramas through a wall of windows. Also new in the lobby are The Beacon restaurant and On the Rocks lounge. In warm weather, guests can dine outside on the lobby terrace, which overlooks the outdoor pool. Deck space at the pool is being doubled this year. The more upscale Latitude restaurant is next to the conference center, which also has undergone a facelift. A cafe serving Starbucks coffee, pastries and other sweets is right off the lobby, next to the gift shop.

In addition to 182 hotel rooms, Blue Harbor offers a complex of 64 two- and four-bedroom villas just steps from the waterpark building. Recent guest room improvements include new pillow-top bedding, flat-screen TVs and upgraded bath amenities. The rooms’ blue-and-cream color scheme is carried throughout the resort. Adorning the walls of our loft suite were framed pictures of lighthouses and other shoreline scenes. A nice touch was the gas fireplace. All rooms have balconies or patios.

Guests interested in water sports can get their gear across the street at EOS (Expedition Outdoor Supply), an outfitter that rents out kayaks, surfboards and bikes. Through Sail Sheboygan yacht club, Blue Harbor guests can sign up for a sailboat ride or lessons.

The resort and neighboring shops along the Sheboygan River are part of the spiffy new South Pier District, a peninsula that once bustled with coal-carrying freighters and various marine businesses. The land was purchased by the City of Sheboygan in 2001 for redevelopment and cleared of environmental contamination. Historical signs along the riverfront promenade explain the port’s history. A replica lighthouse and restored fishing tug accent the miniature golf course. Colorful shingled buildings house shops, including an ice cream parlor and clothing boutique. Moored along the riverside walk are the boats of Dumper Dan and other charter fishing fleets. There’s a fish cleaning station outside the restroom building which is considered one of the best on Wisconsin’s eastern shore. 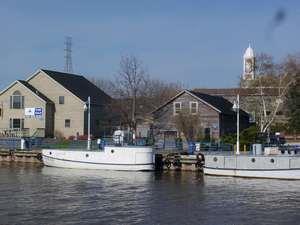 A walk across the river, toward downtown Sheboygan, leads to the Riverfront District, where old wooden warehouses and fish shanties now contain shops and restaurants. Strolling along the waterfront boardwalk, we dropped into Olivada, a new store that specializes in extra virgin olive oils and balsamic vinegars from around the world, from Tunisia to Australia. Sampling the gourmet flavors, we especially liked the chocolate balsamic, the cranberry-pear balsamic and the olive oils fused with lemon and blood orange.

Duke of Devon, an English-style pub, and other Riverfront District restaurants offer outdoor seating. Picnic tables and benches invite visitors to linger on the boardwalk, which is landscaped with royal blue railings and bright white, nautically-themed lampposts.

Downtown Sheboygan’s star attraction is the John Michael Kohler Arts Center, part of which occupies the 1882-83 home of the Austrian immigrant who founded Kohler Co., the renowned plumbing ware manufacturer based in the nearby village of Kohler. The free-admission museum has changing exhibits of thought-provoking art but is just as well known for its artist-created restrooms, which are masterpieces in themselves. The Delft tile-inspired men’s room is a vision in white and cobalt blue with images of Sheboygan-area places; even the toilets resemble Delft ceramics. Brightly colored, glazed Spanish-style tiles on the fixtures and every inch of wall in the lobby men’s room chronicle periods of architecture, beginning with ancient Egypt. Female visitors often can be seen knocking on the men’s washroom doors to take a peek, and vice versa.

Many associate Sheboygan with bratwurst. It is, after all, the Bratwurst Capital of the World. You’ll likely find a community brat fry when your group is in town. Bratwurst in Sheboygan, by the way, is served on a round hard roll, never an oblong hot dog bun.

Miesfeld’s Market, in business since 1941, makes 50 different kinds of sausage and offers group tours. Its 30 varieties of bratwurst range from cranberry cheddar and bacon cheeseburger to French Dijon apricot and Greek chicken with feta cheese and black olive. 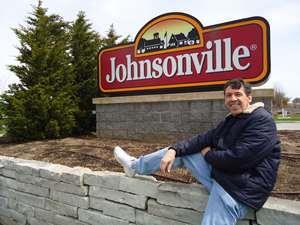 Nationally known Johnsonville Sausage is based in the Sheboygan County hamlet of Johnsonville. Factory tours are not available, but we stopped by just to take a picture of the sign at the entrance. Come to think of it, maybe it’s good they don’t have tours.

Another highlight of my Wisconsin weekend explorations was the Sheboygan County town of Plymouth. I was attracted by the 21 nostalgic murals painted on downtown buildings last year by the Walldogs, a group of muralists that decorate small historic towns around the country. I also found lots of antique shops and the Antoinette Cow Monument, a huge fiberglass statue that represents Plymouth’s ties to the cheese industry. Sargento and other cheese companies call Plymouth home.