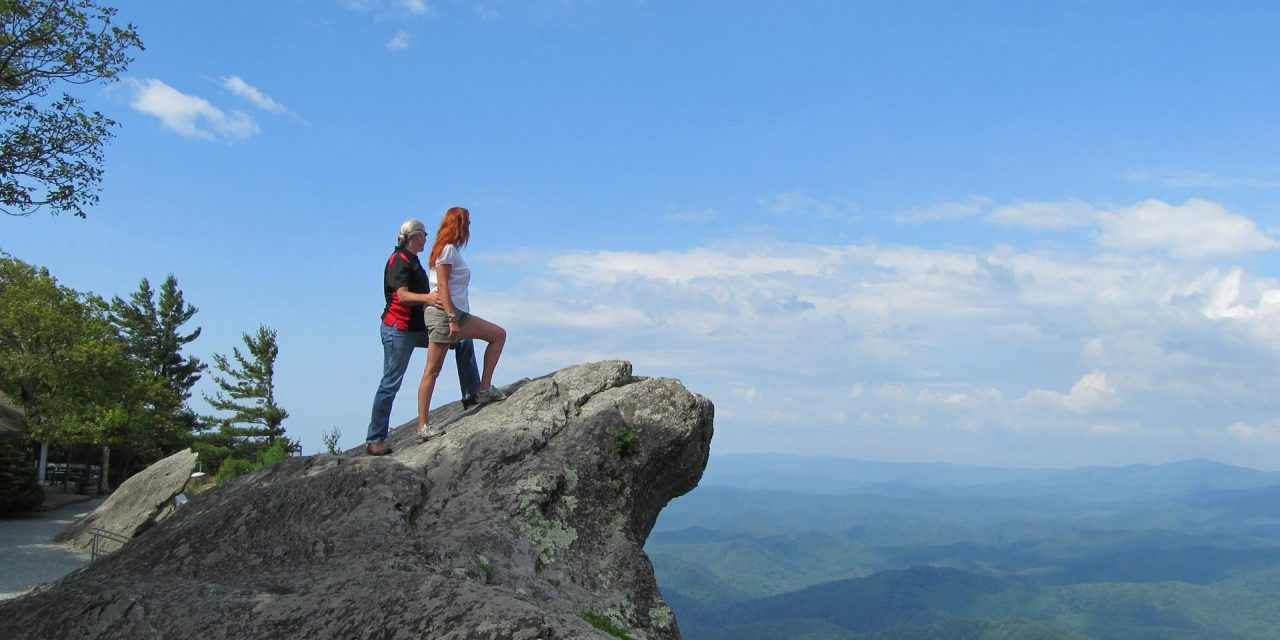 With people these days looking for open spaces, fresh air and the splendors of nature, the Blue Ridge Mountains of western North Carolina provide an ideal refuge from the urban frenzy.

The village of Blowing Rock (pop. 1,250), thanks to its plethora of resorts, inns, bed-and-breakfasts and vacation rentals, accommodates groups of all kinds and is perfect for family reunions. Lots of shops, restaurants and attractions, along with a friendly, laid-back ambience, add to its appeal. 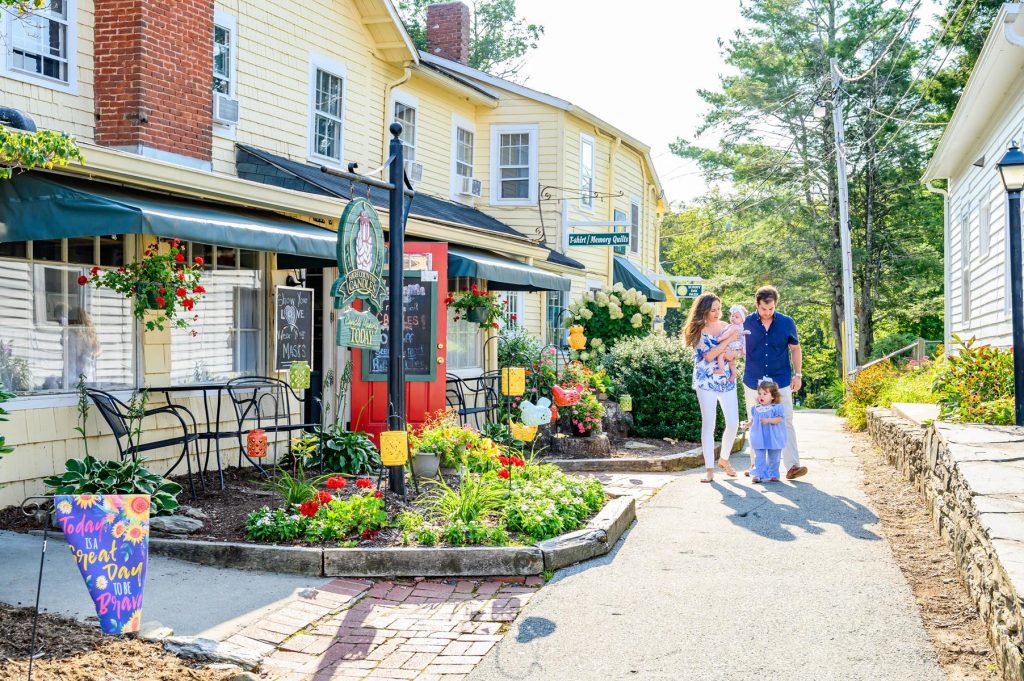 Blowing Rock boasts a stellar location as well, as it is the only full-service town directly on the Blue Ridge Parkway, one of America’s favorite scenic drives. A unit of the National Park Service, the road runs 469 miles from Virginia’s Shenandoah National Park to Great Smoky Mountains National Park in North Carolina, offering more than 200 overlooks affording views of mountains, valleys, meadows and old farmsteads.

Sitting astride the Eastern Continental Divide at an elevation of 4,000 feet, the town of Blowing Rock takes its name from an immense cliff that towers over Johns River Gorge. The granite outcrop is so called because the rocky walls of the gorge form a flume through which the wind spirals upward with such force that light objects cast over the void tend to come floating back. It’s purportedly the only place in the world where snow appears to fall upward.

Legend has it that the mysterious wind has wafted up from the valley ever since a Cherokee man, torn between duty to his tribe and his love for a Chickasaw maiden, jumped from the cliff but was swept back into her arms after she prayed to the Great Spirit for his return. 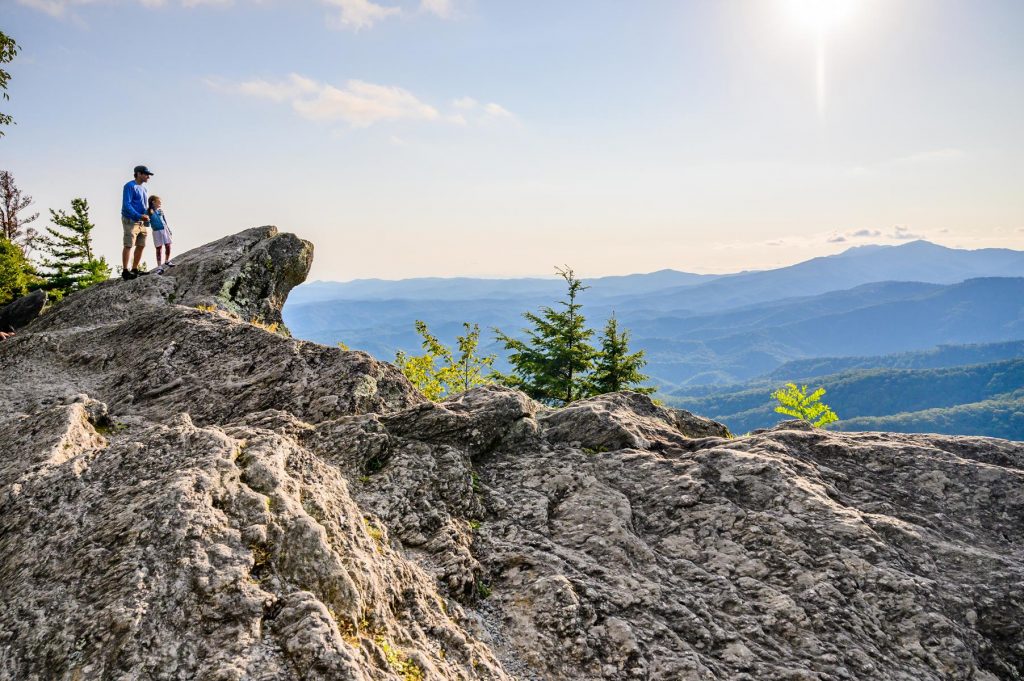 Visitors to The Blowing Rock, billed as North Carolina’s oldest travel attraction (since 1933), enjoy views of Grandfather Mountain (highest peak in the Blue Ridge chain) and Mount Mitchell (highest peak east of the Rockies), among other summits. The fabled rock is accessible via a short path from the main building/gift shop, and an observation deck is situated about 100 yards away at roughly the same altitude. The grounds also include gardens, a waterfall and nature trail. Admission is charged. 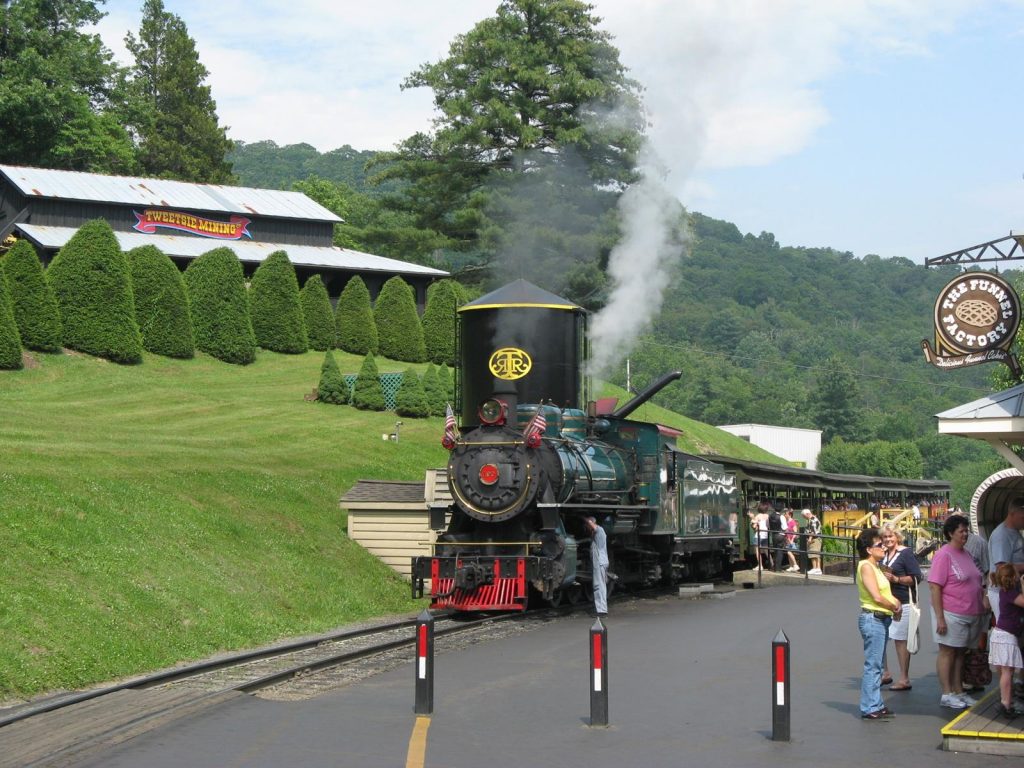 Resort with a Colorful History

Just as Blowing Rock today attracts pandemic-weary visitors looking to revel in the outdoors and get away from the crowds, it served as a summer escape hatch in the 1800s for lowlanders seeking relief from the heat. (Summer temperatures rarely climb over 79 degrees.) Several wealthy industrialists built summer homes in Blowing Rock at the turn of the 20th century.

One such estate was a property today known as Chetola Resort at Blowing Rock. Guests who stay in the main lodge or condominiums on the 78-acre grounds get a taste of yesteryear’s grandeur, especially if they dine at Timberlake’s Restaurant, which occupies the estate’s former manor house. Chetola makes a fine base of operations in the Blue Ridge, as it abounds with a wide choice of on-site activities and is just a short walk from historic downtown Blowing Rock. 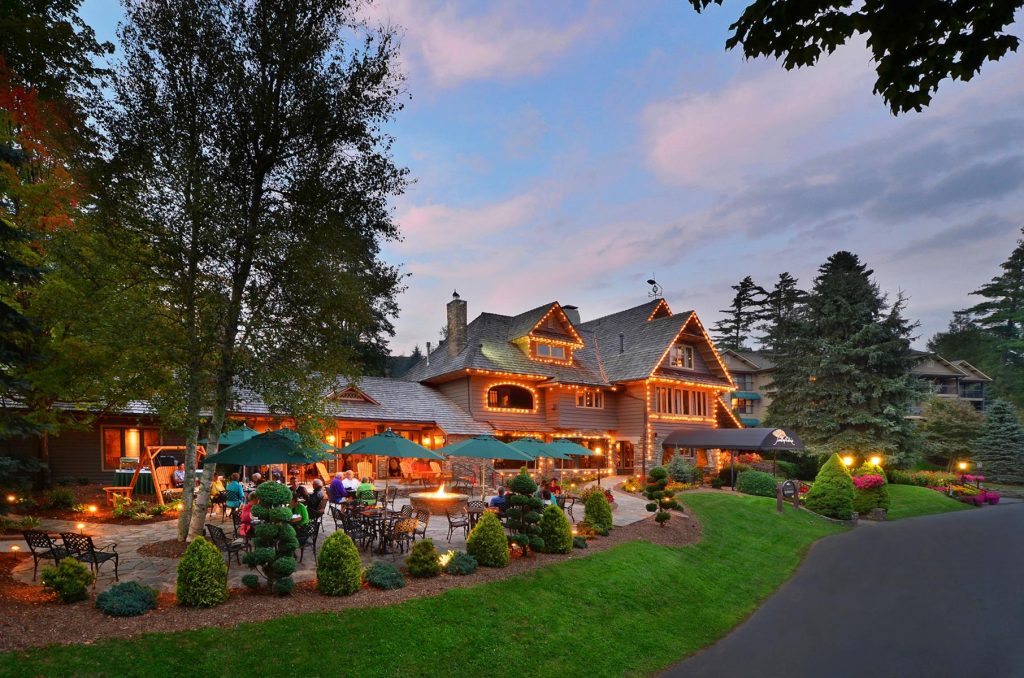 The Chetola estate dates back to 1846. After the Civil War a private home was built, later enlarged and eventually used as a boarding house that became known as the summer resort Silverlake. In 1892 the estate was purchased by an Alabama couple who named it Chetola (a Cherokee word meaning “haven of rest”) and turned it into one of the most beautiful residences in Blowing Rock, adding a spring house, smokehouse, servants’ house, caretaker’s home and large horse stable.

In 1926 Chetola was bought by J. Luther Snyder, an entrepreneur who operated 10 Coca-Cola bottling plants in the Charlotte area. Known as the “Coca-Cola King of the Carolinas,” he expanded the estate, even building a regulation bowling alley for his six children. The Snyders often invited the whole community to parties and celebrations. After Luther’s death in 1957, his heirs owned the property until 1972, and in 1982 it was purchased by a group of businessmen with the vision of making Chetola a retreat accessible to all. They built the elegant lodge and luxury condos.

Today’s owners, Rachael Renar and her son, Kent Tarbutton, have made a number of major upgrades since taking over in 1997 and have carefully maintained the resort’s heritage.

Lodging and Dining at Chetola

The Lodge at Chetola has 42 guest rooms on three floors. The first and second floors were recently remodeled, and third-floor rooms will be redone this year. Framed photos of wildlife and mountain scenery decorate the hallways, while guest rooms sport black-and-white photo murals of nature scenes.

Some rooms have balconies that overlook Chetola Lake, a placid home to ducks, geese and swans. Guests can rent kayaks, paddle boats and paddle boards. There are picnic tables and swings at the lake, and a group barbecue can be arranged by the gazebo. The eight-acre lake is stocked with brown and brook trout, and fishing rods and bait are available. 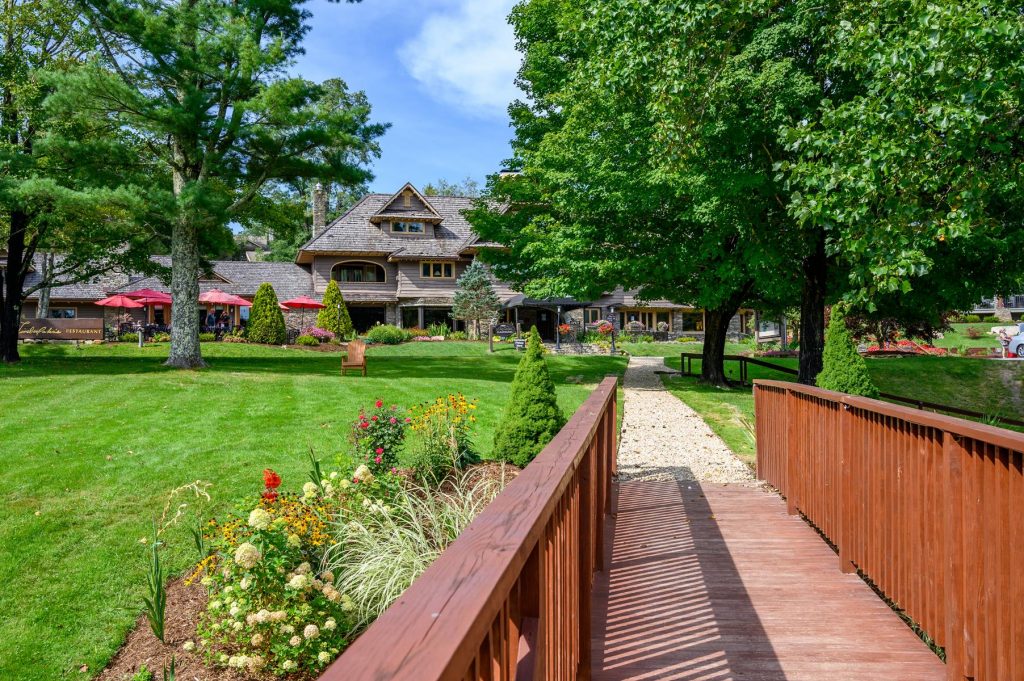 Chetola Resort. a short walk from historic downtown Blowing Rock, has a storied past. (Credit: VisitNC.com)

Next to the Lodge, the manor house contains not only Timberlake’s Restaurant but eight guest rooms in an exclusive bed-and-breakfast called Bob Timberlake Inn. The restaurant, with a menu inspired by renowned North Carolina artist, designer and outdoorsman Bob Timberlake and outfitted with his paintings and designs, consists of three dining rooms, an intimate wine room and Headwaters Pub, plus a patio for lakefront dining. The rustic interior sports wooden beams and paneling, a historic stone fireplace, and walls adorned with vintage fishing and hunting gear, skis, snowshoes and other antiques. One curiosity on display is a collection of thimbles. Photos of Chetola’s early days enhance the nostalgic atmosphere.

Timberlake’s artwork and design touches also are seen in inn guest rooms and the Sporting Reserve’s Clubhouse. Group events can be held in the inn’s Evergreen banquet room and at the Clubhouse.

Entrees at Timberlake’s include shrimp and grits, fish and chips, sweet tea-brined pork ribeye and shepherd’s pie. Save room for desserts like chocolate cashew pie and salted caramel chocolate torte. Among the breakfast temptations are chicken and biscuits with white pepper gravy and challah bread French toast stuffed with apricot marmalade and cream cheese.

Up the hill from the lodge, Chetola manages 73 one- to four-bedroom condominiums. Popular with family groups, all offer a fully equipped kitchen, washer/dryer, fireplace and outdoor deck. Timberlake’s can prepare meals to eat in the condos.

While there’s plenty to do at Chetola Resort, other inviting options are just a walk away—no car required.

Not far from Chetola’s tennis courts, for example, begins a short trail leading to a lake at Moses H. Cone Memorial Park, a Blue Ridge Parkway attraction that preserves the leafy summer retreat of a North Carolina textile baron. “Denim King” Moses Cone and his brother Caesar brought denim production to the South, and by 1905 their company was the largest denim producer in the world.

The park’s Bass Lake Trail, bordered by rhododendrons, hydrangeas, mountain laurel, white pines, spruces, hemlocks, Fraser firs and sugar maples, is an easy mile-long loop around a pretty lake with an island in the middle. All the estate’s paths, built as carriage trails in the late 19th century, are wide and perfect for large groups. One trail leads to the big white 1898 mansion, Flat Top Manor. Perched on a hilltop 1,000 feet above the lake, it is home to a Southern Highland Craft Guild store and National Park Service information center. Craft demonstrations are offered from April to November. Other trails lead to the Cone cemetery, a fire tower lookout that provides breathtaking views and an old apple barn whose bounty was provided by the 32,000 apple trees planted in the estate’s orchard. Though Moses Cone died in 1908, his wife, Bertha, lovingly maintained the property until her death in 1947.

Shoppers also gravitate to Main Street in downtown Blowing Rock. Along a streetscape graced with flower boxes, specialty stores purvey everything from Christmas ornaments and hand-dipped candles to antiques and oriental rugs. Fashion boutiques, art galleries and vacation rental offices are part of the scene as well. For lunch, stop by the Town Tavern and dine on the tree-shaded patio facing Main Street. Or go across the street to Blowing Rock Grilled Cheese Cafe, located in the rear courtyard of the Victorian-themed SouthMarke shopping village.

Another Main Street focal point is Memorial Park, the ideal place to relax on a bench while people watching and enjoying an ice cream cone. The park often has live music and is the site of annual festivals and events.

For travel information on Blowing Rock, visit www.blowingrock.com. Details on Chetola Resort are available at www.chetola.com.