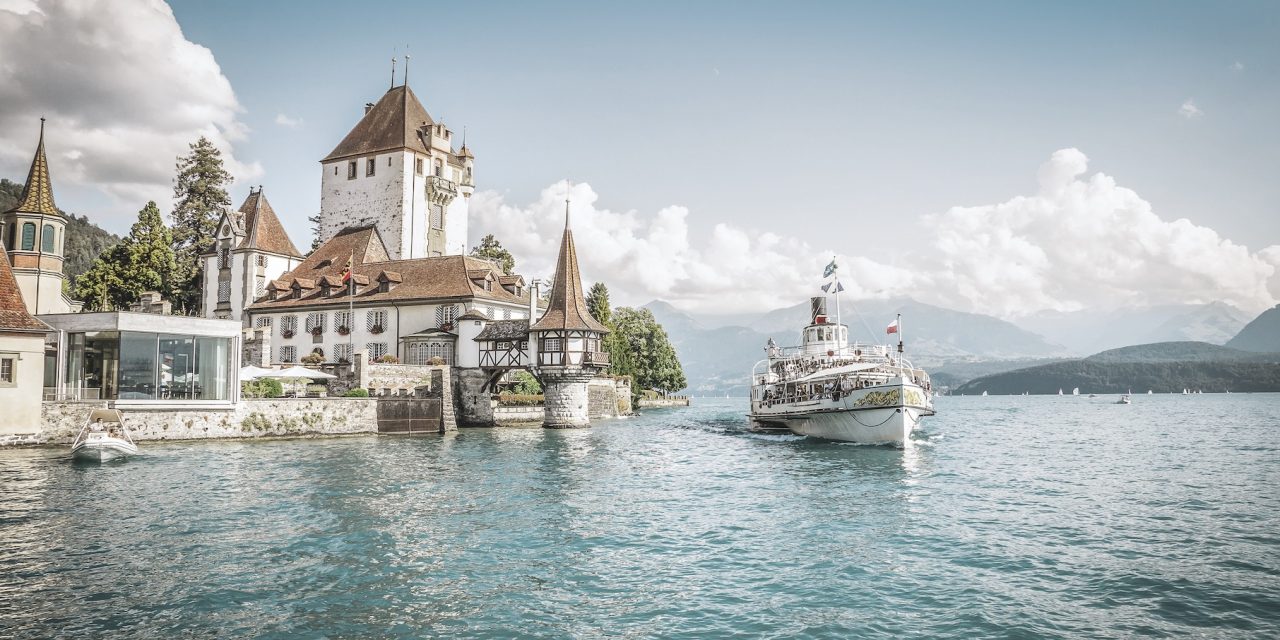 The capital of Switzerland is a portal to the crystalline lakes, idyllic valleys and rugged peaks of the Bernese Oberland

From historical sights in the UNESCO-listed capital city to enticing mountain landscapes right out of a travel poster, the Alpine region near Bern offers the best of Switzerland.

Interlaken, less than an hour from Bern, is the main resort city in the Bernese Oberland and a jumping-off point for adventures throughout the Jungfrau holiday region.

BERN: PRETTY AS A POSTCARD

Few capital cities are as charming and compact as Bern. Its Old Town, founded in 1191, is an urban gem without equal, and that’s why it has been designated a UNESCO World Heritage Site.

For several miles, visitors can stroll past the Old Town’s tawny sandstone buildings and through cozy medieval arcades—the longest covered shopping promenade in the world. Colorful figures adorn beautiful Renaissance water fountains, more than 100 of them. Window boxes overflow with red geraniums. Visitors love to frame the picturesque terra-cotta roofs with the Alps in the background. Concentrated on a peninsula in the River Aare, all the sights are close to each other and easy to reach by tram, bus or on foot.

The streets and buildings of Old Town Bern have stirring stories to tell, and in the midst of it all stands one of the city’s best-known landmarks—the Zytglogge (Clock Tower). Once a city gate, the Clock Tower attracts spectators from all over the world. As it prepares to strike the hour, people gather to watch a one-of-a-kind performance involving mechanical figures, including a parade of bears, a jester, a golden rooster and Chronos, the god of time. 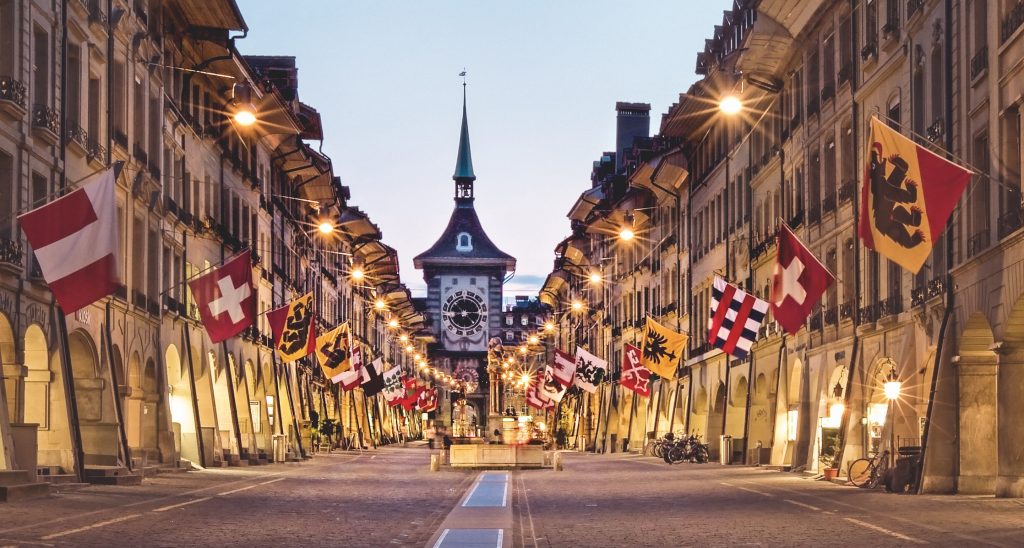 The Bern Minster, one of the skyline’s dominant landmarks, claims the tallest church spire (328 feet) in all of Switzerland. Trudging 312 steps to the viewing deck rewards climbers with a breathtaking panorama stretching from the Old Town to the snow-dusted peaks of the Bernese Oberland. The Gothic cathedral’s main portal features 234 colored figures representing the Last Judgment.

Next to the Bern train station stands the Church of the Holy Spirit, considered to be one of the most beautiful Baroque churches in Switzerland. The richly furnished interior of the Protestant Reformed church is dominated by 14 sandstone columns and a free-standing pulpit.

The French Church, built in the 13th century by the Dominicans, is the oldest sacred building in the capital and attracts fans of architecture, art and culture alike. Gothic pillars and high, narrow windows contrast with austere elements from the Reformation. The French Church is just a stone’s throw away from the Kornhaus granary and Bern’s Lower Old Town.

The Church of the Holy Trinity was named a basilica minor in 1956 by Pope Pius XII for its importance as an “outstanding place of worship and devotion…” as well as its architectural style and furnishings. Built from 1896-1899, it is located by a pleasant city park near the Old Town.

The Bern Historical Museum, the second largest museum in Switzerland, is housed in a castle-like structure and is packed with interest, including exhibits on the history of Bern and a town model from around the year 1800, plus a sub-museum on Albert Einstein, who lived in Bern in the early 1900s. Other prominent museums are the Swiss Alpine Museum, Museum of Fine Arts and Paul Klee Center, which features works by the Swiss-born artist Paul Klee (1879-1940).

Occupying a narrow strip of land between deep blue Lake Thun and turquoise-colored Lake Brienz, Interlaken is a popular resort town steeped in traditions and with a long history as the tourist hub of the Bernese Oberland. In fact, it may have been where modern tourism in Switzerland began. Mark Twain, Lord Byron, Johann Wolfgang von Goethe and Felix Mendelssohn Bartholdy all stayed there as guests.

Interlaken, located 36 miles southeast of Bern, is known for its surrounding Alpine scenery and the two pristine lakes. The crystal-clear waters, soaring peaks and closeness to nature lend the place a sense of well-being. The town is a gateway to the Jungfrau Region’s waterfalls, lakes and mountains, including that spectacular trio of sky-high crags—the Eiger, Mönch and Jungfrau. Offering a number of splendid hotels, lodges and spas, Interlaken makes a good base for exploring the Bernese Alps and pursuing adventure activities, including extreme sports like whitewater rafting, skydiving and ice climbing. 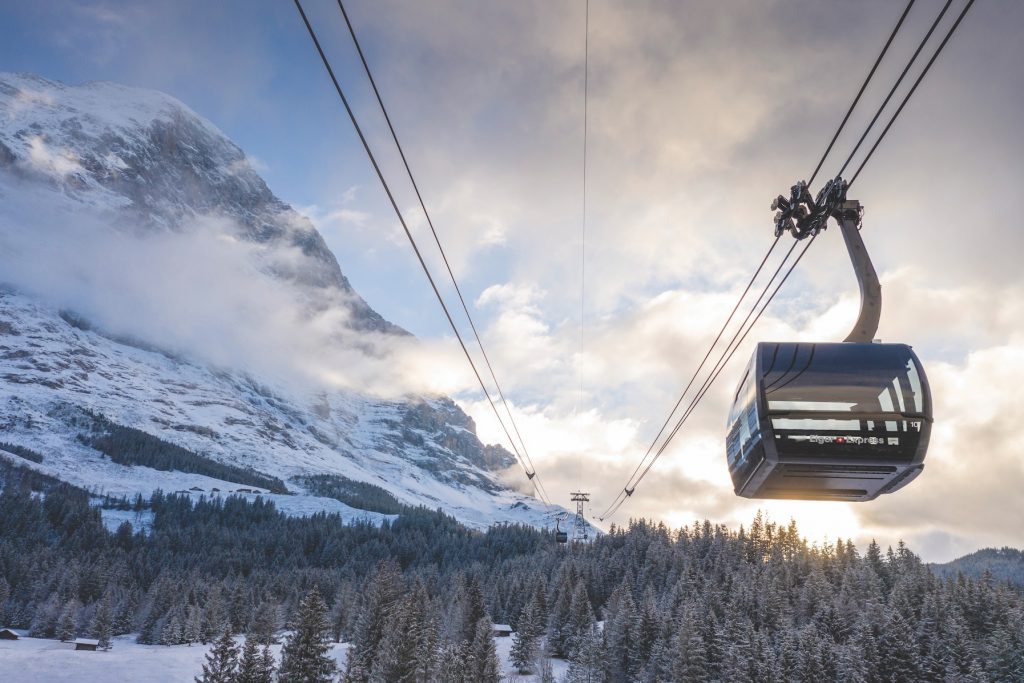 Just a few miles away from Interlaken, on a sunny south-facing slope, lies Beatenberg- Niederhorn, a paradise for paragliders. For hikers there is an extensive network of trails. The Niederhorn provides a habitat for ibexes, chamois and marmots.

Kayaking and canoeing adventures are available in the region as well. On both lakes Brienz and Thun the possibilities for water sports are endless.

The two lakes count many historic towns, and there are three waterside castles in or near Thun. Sightseeing and meal cruises from Interlaken and Thun can easily be combined with museum and castle visits, cable car rides to mountaintops, and easy hiking and cycling routes that afford stunning views.

The 7,700-foot-high Brienzer Rothorn towers over the town of Brienz, and the Brienz-Rothorn Bahn—the only steam-powered rack railway in Switzerland, with a gradient of 22.5%—carries passengers up to 7,300 feet in about an hour. The railroad began service in 1892. The views from the top are superb, and on a clear day visitors can see many famous Swiss mountain peaks.

An eight-minute funicular ride up from Interlaken to the 4,337-foot mountain Harder Kulm is an option for those who don’t have time for a longer excursion. The scenic overlook offers a chalet-style restaurant on a sunny terrace with views of Interlaken, the lakes and white peaks in the distance.

Guests visiting the Schynige Platte plateau on the historic cog railway instantly feel carried back to the Belle Epoque period. The wooden benches in the coaches and vintage rolling stock dating from 1893 exude the feeling of times long past. The mountain station at 6,453 feet is the starting point for a number of gratifying circular hikes. The plateau’s Alpine botanical garden represents some 650 plant species. Magnificent views of the Alps and lakes Thun and Brienz can best be appreciated from the Schynige Platte panorama restaurant, where guests are treated to delicious Swiss and international dishes.

In winter months, visitors benefit from Interlaken’s proximity to ski resorts of the Jungfrau Region (Mürren/Schilthorn, Kleine Scheidegg/Männlichen and First) and the family-oriented ski destinations of Beatenberg and Axalp-Brienz. Crosscountry skiers and toboggan riders will also find many opportunities for their sport. And there are over 135 miles of winter walking trails in Interlaken, Beatenberg, Axalp-Brienz, Habkern, Wilderswil and elsewhere in the Jungfrau Region. Guests staying in Interlaken can take advantage of the daily ski bus transfer connecting it with Mürren/Schilthorn, Kleine Scheidegg/ Männlichen and First.

Because of its location, Interlaken is the main railway transfer point for the region, with rail routes leading to Bern and Lucerne, and branch lines leading out in many directions into the high Alps nearby. Over 45 mountain railways, cable cars, chair lifts and ski lifts lead to 125 miles of pistes and many hiking trails.

Trains run from Interlaken Ost (East) railway station to the Jungfrau Region and to the villages of Grindelwald and Lauterbrunnen, with connections to the railway to Wengen and Mürren. From there, passengers can go to the Schilthorn as well as Kleine Scheidegg and the Jungfraujoch – Top of Europe.

Interlaken is also conveniently located on the Golden Pass Panorama route that goes from Montreux on Lake Geneva past the luxury holiday resort of Gstaad to Interlaken, and from there across the Brünig Pass east to Lucerne.

The region’s top attraction is an exciting train trip to the Jungfraujoch, the “Top of Europe.” Chugging through spectacular scenery to the continent’s highest rail station (at 11,333 feet above sea level), the Jungfrau Railways offers one of Switzerland’s classic experiences. You can also catch the new Eiger Express cable car in Grindelwald, which joins up with the train at Eigergletscher station.

On the Jungfraujoch, an icy saddle lying below the 13,642-foot summit of the Jungfrau, the Ice Palace enchants visitors with ice sculptures built into a series of caverns. You can also watch a movie, have lunch or snacks, buy souvenirs and visit the Glacier Plateau, which affords fantastic views of Aletsch Glacier, the longest in the Alps.

One hike that offers great views is the Männlichen Royal Walk above Wengen. A short 25-minute stroll takes you to the top of the Männlichen, which affords vistas of the mammoth, triple-peaked ridge consisting of the Eiger, Mönch and Jungfrau, plus panoramas encompassing the Lauterbrunnen Valley and Grindelwald.

The bustling Eiger village of Grindelwald lies embedded in a welcoming green hollow surrounded by an imposing mountainscape with the Eiger north face and the Wetterhorn. Numerous lookout points and activities make Grindelwald one of the most popular vacation destinations in Switzerland. It is the largest ski resort in the Jungfrau Region.

The two ski areas of First and Kleine Scheidegg/Männlichen/Wengen offer 100 miles of pistes with around 30 lifts reaching an altitude of 8,200 feet. The Schilthorn near Mürren, also part of the Jungfrau ski area, reaches even higher. Visitors can choose from 62 miles of winter walking trails with views across high mountain peaks and majestic glaciers, and 37 miles of toboggan runs.

The ski areas around Grindelwald, Wengen, Mürren and Hasliberg offer a total of 260 miles of ski runs ranging from fast to leisurely, with more than 40 percent of them equipped with snow-making machines. Among the 185 miles of walking trails around Grindelwald is the one from Grindelwald-First along the glacial lake Bachalpsee to the Faulhorn mountain hotel and then onto the Schynige Platte; it ranks among the most beautiful hikes in the region. Another easy walk with fantastic views leads from Männlichen up to Kleine Scheidegg.

A special adventure is taking a cable car that whisks you in three stages from the valley station to Grindelwald-First at 7,112 feet. The summit rewards visitors with breathtaking views of the north face of the Eiger. The 2,625-foot-long First Flyer zipline and a highoctane scooter ride provide rushes of speed and adrenaline for thrill-seekers.

The First Cliff Walk by Tissot near Grindelwald is another major draw. At 7,300 feet above sea level, the lookout platform juts out 150 feet into the void and offers heartpumping views of the mountains and valley. It’s not for anyone with vertigo. A big thrill in the Gadmental Valley is the Trift Bridge, one of the most spectacular pedestrian suspension bridges in the Alps.