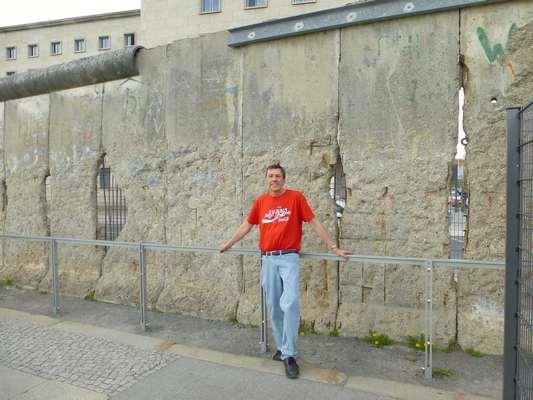 Leisure Group Travel’s Randy Mink at a remaining section of the Berlin Wall.

As an adventurous young traveler in the 1970s, Berlin for me was a place of intrigue, isolated and forbidding, an urban island surrounded by Communist East Germany. Not only was it cut off from the rest of Europe by the Iron Curtain that descended after World War II, but the free-spirited western part of the city was divided from drab East Berlin by an infamous concrete barrier the Soviet-backed regime had erected in 1961 to restrict its own people. 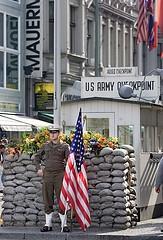 Just after graduating from college, I made several visits to East Berlin, crossing through the Berlin Wall at Checkpoint Charlie in the American Sector, to visit my East German pen pal, a Protestant minister. Both of us were nervous (he more than I) about being watched by spies and informants as we walked around the gray city, sat in cafes, and went into “dollar stores” where I could use American money to buy him simple things (like pineapples) that were unavailable at ordinary stores.

Of course, East Germany no longer exists, and Berlin now is one city. But on my recent visit to the capital of reunited Germany, this Cold Warrior had trouble envisioning it as a whole after years of thinking in terms of East and West. Many of us of a certain generation thought we’d never see the Wall fall in our lifetime. Still emblazoned in our minds are news clips of John F. Kennedy’s 1963 “Ich bin ein Berliner” speech and the words uttered by Ronald Reagan at the Brandenburg Gate: “Mr. Gorbachev, tear down this wall.”

Today eastern Berlin has gone from dreary to cheery. The entire city has been transformed and continues to reinvent itself. More than 22,000 new buildings have arisen since the Wall fell in 1989; construction cranes punctuate the skyline in every direction. As Germany’s capital since 1991, Berlin has emerged as a center of art, fashion, music, urban design and cutting-edge architecture. To the current generation, it’s always been this way—a cool, creative, cosmopolitan city with limitless possibilities. But for sightseers interested in 20th century history, there’s plenty that triggers memories of WWII and the Cold War, including Holocaust memorials and remnants of the Berlin Wall.

To get my bearings in Germany’s most populous city (3.5 million), I use the Brandenburg Gate as a focal point. Once part of a no-man’s-land at the Berlin Wall and now a symbol of German unity, the triumphal Doric colonnade (1791) is a must stop. To help stage your photos, “soldiers” dressed in Soviet and East German uniforms and holding flags will pose with you—for tips, of course. Nearby souvenir vendors sell flags, military caps and medals, and Russian fur hats and stacking dolls.

Along with street entertainers, these purveyors of commercialism are stationed at Pariser Platz on Unter den Linden, a wide boulevard lined with monumental 18th and 19th century buildings. Once the showplace of former East Berlin, the avenue runs east from Brandenburg Gate to the River Spree. One could spend days exploring the attractions here in the Mitte (“Center”) district, the city’s historic—and touristic—core.

Museum Island, surrounded by the Spree, counts five grand repositories, the most notable being the recently renovated Pergamon Museum, home to the Greeks’ Pergamon temple altar, Ishtar Gate from Babylon and other antiquities brought back by German archaeologists in the late 1800s.

A walk down Unter den Linden (literally “under the linden trees”) takes you past the German History Museum, which chronicles everything from the Celts and Middle Ages to the Prussian dynasty, two World Wars, the Cold War, and reunification in 1990. The hands-on DDR Museum, a few blocks away, provides a peek into everyday life in East Germany (German Democratic Republic). Learn how rebellious citizens resorted to nudism, tour replica rooms typical of those in pre-fabricated apartment blocks, and have a wistful look at some of the country’s inferior products (sit in a “Trabi,” the putt-putt, two-cylinder Trabant car).

Across the river from the DDR Museum looms the Baroque-style Berliner Dom (Cathedral), an ornately decorated Protestant church crowned with a magnificent green copper dome. An even more dominant skyline feature is the 1,197-foot TV Tower on nearby Alexanderplatz. The silvery exclamation point dating from Communist days offers panoramic views from its observation deck. 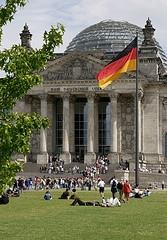 The Reichstag in Berlin

Other sweeping vistas are afforded from the fancy glass cupola that caps the historic Reichstag, the centerpiece of the new Government Quarter. The Reichstag houses the Bundestag, the lower legislative chamber of the Federal Republic of Germany. At the base of the dazzling dome you can peruse a timeline of historical photos and, from the roof terrace, admire sights flanking Unter den Linden, plus the vast green spaces of the Tiergarten, Berlin’s “Central Park.” The highlight is your audio tour along the spiral ramp inside the dome’s interior.

Within easy walking distance of the Reichstag and Brandenburg Gate are several WWII memorials, including a new one remembering the 500,000 Roma and Sinta (Gypsy) people of Europe who died in the Holocaust. The Memorial to the Murdered Jews of Europe, better known as the Holocaust Memorial, is a walk-through labyrinth of sarcophagi-like cement slabs covering a whole city block. 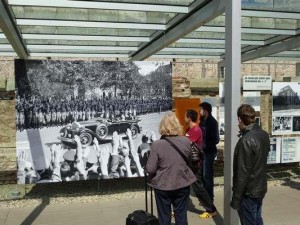 The threads of WWII and the Cold War come together at Topography of Terror, a riveting indoor-outdoor museum that documents Nazi atrocities against various groups of victims, from Jews and Gypsies to the mentally ill. In a trench below a remaining section of the Berlin Wall, a 1933-1945 Berlin timeline dramatizes the Nazis’ rise and fall through oversized photos. Other Berlin Wall photo ops include the East Side Gallery, a colorful, mile-long section decorated by artists from over 20 nations, and the Berlin Wall Memorial along Bernauerstrasse, which has a museum, monument, and chapel.

Checkpoint Charlie, not far from Topography of Terror, was the famous border crossing used by foreigners. At the site you can pose with “American soldiers” at a guardhouse replica and take a nostalgic trip back several decades at the Berlin Wall Museum. In a warren of rooms cluttered with artifacts, photos, yellowing newspapers, and video stations, you’ll find a jumble of exhibits in no particular order. Of most interest are the stories of daring escapes made by freedom-seekers from the East. See how they hid in car gas tanks and crawled through tunnels.

Transplanted sections of the wall are on display at Potsdamer Platz, a high-rise hotspot that occupies an area that lay in ruins after WWII and languished as a “death strip” during the Cold War. Considered the Times Square of Berlin in pre-war days, Potsdamer Platz was the city’s most important traffic junction. Now dominated by the pavilion-like roof of the Sony Centre and other architectural showpieces, it has re-emerged as a commercial hub and is the best place to experience the new Berlin.

The Berlin many of us remember is centered around the Kurfürstendamm, the avenue that forms the heart of western Berlin. Tourists throng the Ku’damm’s department stores, designer boutiques, souvenir shops, restaurants and outdoor cafes. The bombed-out tower of Kaiser Wilhelm Memorial Church, an iconic reminder of WWII destruction, is the street’s most prominent attraction but at present is covered up for renovation.

Charlottenburg Palace, in the genteel western Berlin neighborhood of Charlottenburg, provides a welcome break from 20th century flashbacks. The sumptuous Baroque residence of Prussian kings (largely a reconstruction) abounds with exquisite art and antiques. Take time to walk in the French-style gardens.

Even a week-long stay cannot do justice to Germany’s sprawling capital, a fascinating place with a brilliant future and a recent history that many of us remember as headlines in the news.