Beach Blanket Bliss on the ‘Coast’ of Indiana 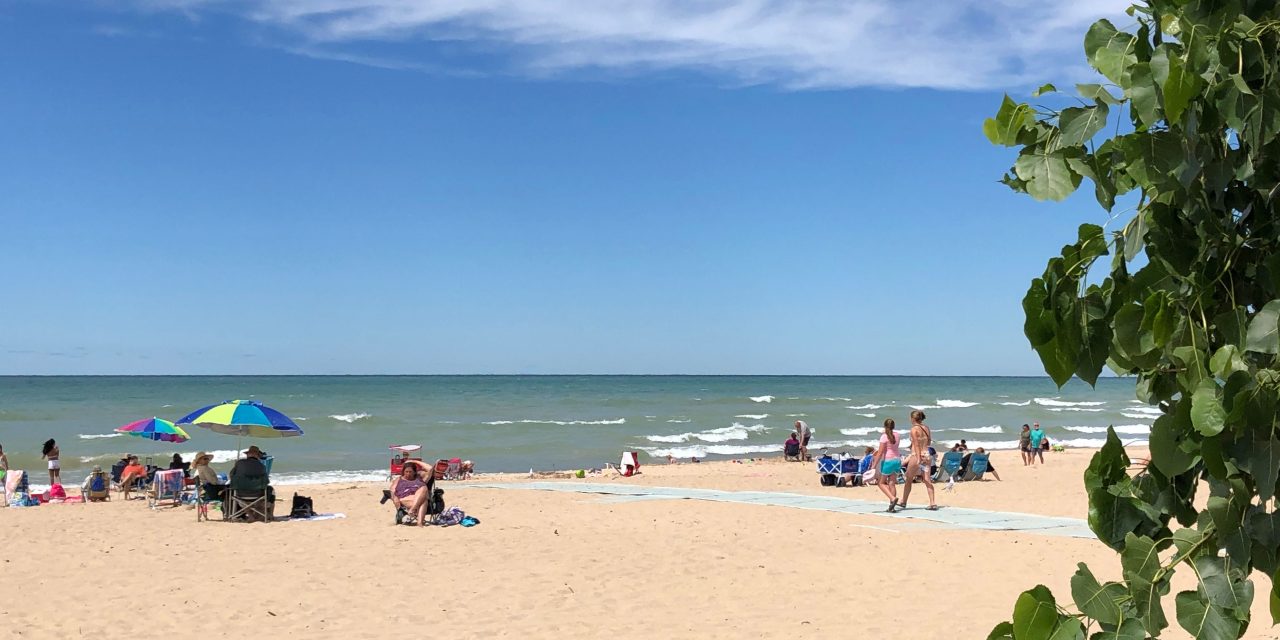 Explore the shore of Lake Michigan, a sandy slice of paradise less than an hour from downtown Chicago. The Indiana Dunes is the state’s top tourist destination.

Frolicking at the Indiana Dunes is all about sinking your toes into silky soft sand, playing in the waves, and hiking up “mountains” that offer sweeping panoramas of a vast blue “ocean” that is Lake Michigan. From the beach or atop the dunes you can see the mighty skyline of Chicago some 30 miles away. 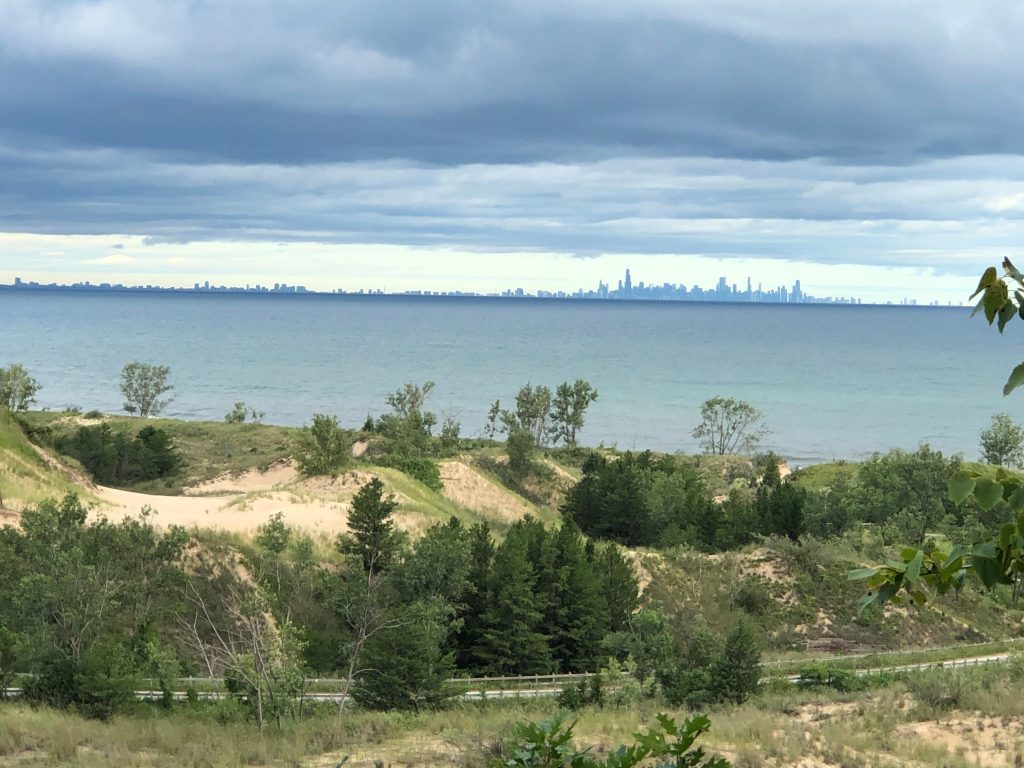 On clear days, visitors to Indiana Dunes National Park can see the Chicago skyline on the horizon. (Randy Mink Photo)

Hugging the southern tip of Lake Michigan from Gary to Michigan City, the park consists of wetlands, prairies, sand dunes, oak savannas, hardwood forests, pine groves, and historic sites, not to mention 15 miles of beaches. Within the national park is Indiana Dunes State Park. Each park has its own entrance fee, and each has a campground.

For orientation, a good place to start is the Indiana Dunes Visitor Center in Porter, just south of the state park and U.S. 20. It has an exhibit hall, a gift shop, and a short film in the theater. For cyclists, the paved, two-mile Dunes Kankakee Trail begins at the visitor center and goes north to the state park on Lake Michigan. The bike trail system contains six interconnected trails of varying lengths and difficulties covering 37 miles.

The recently restored state park pavilion in Chesterton, dating from 1930, features a cafe, ice cream shop, banquet center, gift shop, and great views from the rooftop bar. For beach-goers, there are changing rooms and outdoor showers. Birders climb up to the observation platform by the parking lot in hopes of spotting some of the hundreds of species that live in or migrate through the area. With over 1,000 native plant species and 370 bird species, the park’s biodiversity ranks fifth out of all 400-plus National Park Service lands. The best birding is during the spring and fall migrations.

In the state park, serious hikers can take the 3 Dune Challenge, a 1.5-mile trail that includes the park’s three tallest sand dunes—Mount Tom (192 feet), Mount Holden (184 feet), and Mount Jackson (176 feet). Those who conquer the trail can buy a 3 Dune Challenge shirt or hoodie and pick up a free sticker from the Indiana Dunes Visitor Center. 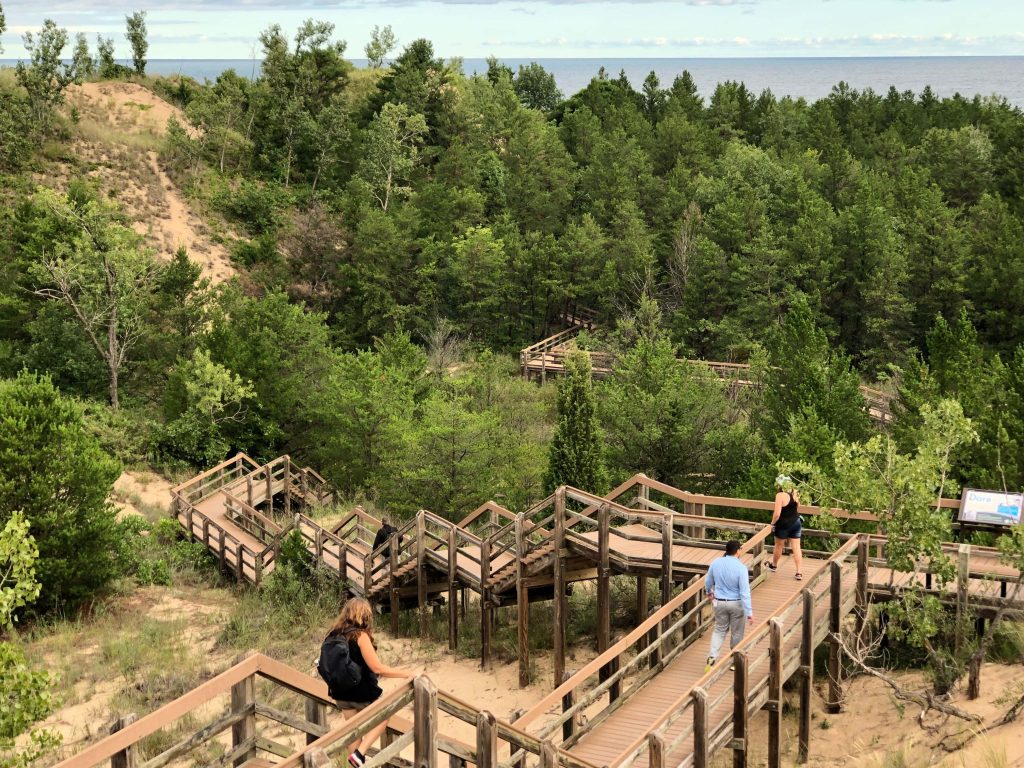 At West Beach in Indiana Dunes National Park, hikers on the Dunes Succession Trail follow a wooden boardwalk through the hills of sand. (Randy Mink Photo)

Mount Baldy, the largest dune in the national park, moves about four feet every year, burying everything in its path, including trees. Hikes on the .75-mile trail around the dune’s west base, from the parking lot to the beach, can only be led by park rangers. The summit of 126-foot Mount Baldy is closed to hiking because geologists have discovered large holes (vertical tubes) in the dune that were formed by trees being covered by moving sand and then decomposing, leaving an open tube. In 2013 a child fell over 10 feet down into a tube and was buried for four hours before being rescued by a large excavator.

West Beach, with a bathhouse, stationed summer lifeguard, and a huge swath of sand, is one of the national park’s most popular beaches. The Dunes Succession Trail (also known as Diana of the Dunes Dare) involves climbing up and down wooden staircases that snake through the mounds of sand near the beach. Hikers are rewarded with fine views of the lake and Chicago skyline.

Remnants of the Past

Historical sites in the national park include Bailly Homestead, named for a Frenchman who set up a fur-trading post around 1820, and adjacent Chellberg Farm, a Swedish settlement that interprets the period 1890-1910. 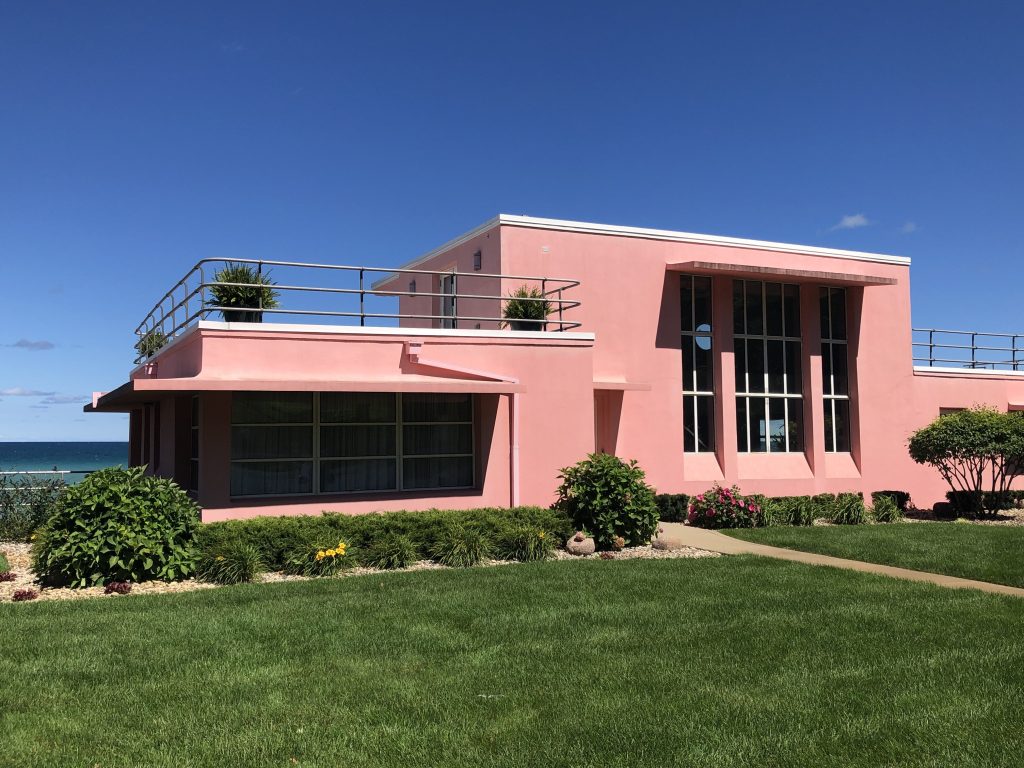 The Florida House, one of five Century of Progress Homes from the 1933 Chicago World’s Fair. (Randy Mink Photo)

In Beverly, Shores stand the Century of Progress Homes from the 1933 Chicago World’s Fair. Transported on barges across Lake Michigan in 1935, the five lakefront homes are within walking distance of each other. Informational panels provide details on the structures, which were built to showcase modern architectural design, innovative building materials, and new technologies like air conditioning and dishwashers. Most luxurious was the Florida House, a flamingo-pink Art Deco building with cruise ship-inspired elements. It was sponsored by the State of Florida to lure tourists to the Sunshine State. Over the years, the home’s bright pink color has served as a navigational aid for boaters on Lake Michigan. An annual tour in the fall provides a peek inside the Century of Progress Homes, each one privately owned.

Michigan City, a short drive from the Michigan state line, abounds with visitor attractions. The lakefront’s Washington Park offers two miles of pristine beach, one of Lake Michigan’s largest municipal marinas, and the Washington Park Zoo, which has an observation tower affording panoramic views. The Old Lighthouse Museum, which celebrates its 50th anniversary in 2023, holds seven rooms with exhibits on maritime and local history; it occupies an 1858 lighthouse that was transformed into apartments for the keepers when the new Michigan City Light opened at the pierhead in 1904. Painted red and white, that historic landmark is a picturesque symbol of Michigan City and the state’s only operating lighthouse, serving as a beacon to both international cargo ships and recreational boaters. 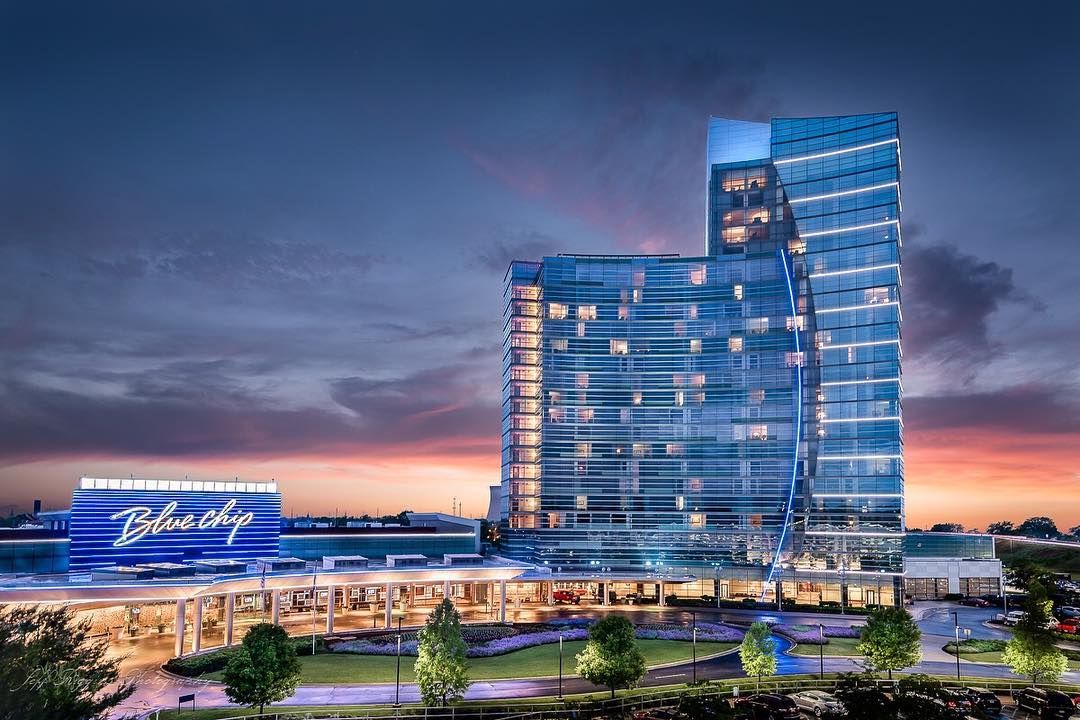 Tour planners putting together Northwest Indiana itineraries also may want to include Cedar Lake, 20 miles south of Lake Michigan. Once fringed with resort hotels, Cedar Lake thrived from the 1880s to the 1930s as a summer getaway for Chicagoans. Nostalgia for that golden age lures visitors to The Museum at Lassen’s Resort on Cedar Lake, a trove of local history housed in a hotel that operated from 1921-1944. Once a week, cruises from the museum’s pier are offered on an old-fashioned, steam-powered boat, the kind on which the Dewey Steamboat Line once transported guests from the train depot to Lassen’s. Built on the 1913 hull of a lifeboat from a Great Lakes steamship, the replica Dewey boat is a project of the Hesston Steam Museum in LaPorte and has been doing narrated cruises for two years. Cedar Lake, the largest lake entirely within Northwest Indiana, retains its resort-like atmosphere, and the town of Cedar Lake has many good restaurants. All but a half-mile of the nine miles of shoreline is private. 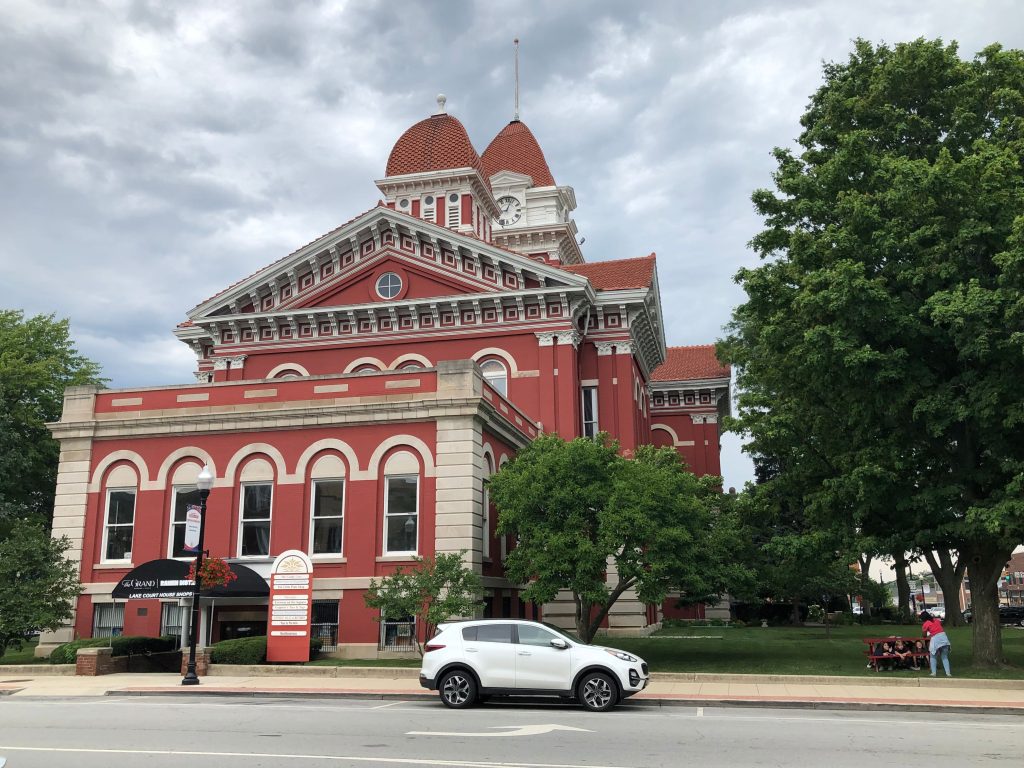 Also worth a visit is Crown Point, whose centerpiece is the Old Lake County Courthouse, a grand, red-brick building that now is home to the Lake County Historical Museum and a handful of specialty shops. In well-preserved late 19th century and early 20th century buildings facing the Courthouse Square, and nearby, are some top-notch antique shops.

Among the area’s prime tourist stops are Albanese Confectionery in Merrillville, a large candy factory that has been making chocolates and the “World’s Best Gummies” for more than 30 years. Favorites include the triple-coated malted milk balls and peanut butter-filled chocolates. Free samples are gladly given. Across the highway is another house of treats—Chicagoland Popcorn, where sampling and group tours are welcome. The Walker family makes more than 250 flavors of gourmet popcorn, from bubble gum and cotton candy to cherry cola and root beer.