Amid the commotion of commuters scurrying to their trains, tourists leisurely explore the world’s largest train station, poking into nooks and crannies while reveling in the history of one of New York City’s grandest public spaces. Even at rush hour, there’s plenty of elbow room to gawk and absorb the architectural splendor of this iconic landmark—Grand Central Terminal. 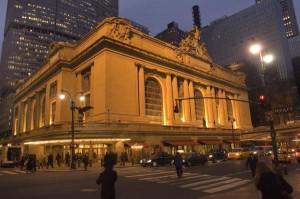 A beehive of activity in midtown Manhattan for almost a century, Grand Central is as much a New York legend as the nearby Chrysler Building, the Empire State Building and Statue of Liberty. Saved from the wrecking ball in the 1970s, the 1913 Beaux Arts masterpiece at 42nd Street and Park Avenue serves as a sort of scavenger-hunt adventure for visitors who rent headsets for the “Grand Central Official Tour,” a self-guided audio tour. Offered every day of the year, it can last anywhere from 25 minutes (if you just stop at the starred highlights) to an hour or so for all 22 stops on the tour map.

The tour takes you through the cavernous Main Concourse with its starry ceiling, the Lower Level’s Dining Concourse and even outside to view the mythological limestone sculptures and huge Tiffany clock on the monumental 42nd Street façade, which resembles a Roman triumphal arch. It’s a trip back to the golden days of railroading and a look at how this National Historic Landmark now thrives as a midtown shopping and dining destination.

Underground, more than 60 railroad tracks carry passengers to upstate New York and Connecticut. And because all tracks terminate here, it’s called a terminal, not a station. (“Grand Central Station,” though, has a better ring to it.) It’s also a major subway stop.

The audio on your headset comes through as clear as a bell despite the roar in the station. Explanations of each point of interest are short and concise. On the audio player, just push the numbered button for each corresponding sight–the ticket windows, information, desk, ceiling, grand staircases, etc. If you want more details relating to the stop, push the green button for optional commentary. The introduction is provided by Mayor Michael Bloomberg.

The most notable feature of the Main Concourse is the massive vaulted ceiling, 125 feet high, and its astronomical mural painted in gold leaf on cerulean blue oil. The painting, from a design by the French painter Paul Helleu, portrays the Mediterranean sky with medieval-style zodiac signs and 2,500 stars. The 60 largest stars mark the constellations and are illuminated with fiber optics but used to be lit with 40-watt light bulbs that workers changed regularly. Your audio tour also points out the 75-foot-high arched windows and massive nickel- and gold-plated chandeliers studded with bare light bulbs.

The four-sided clock atop the round information booth in the center of the Main Concourse is a popular rendezvous spot, and you learn there’s a hidden spiral staircase inside that leads to the information booth on the lower level.

On the Dining Concourse, visitors have fun in the Whispering Gallery at the ramp outside the famous Oyster Bar restaurant. In this tunnel-like passage, the arched ceiling conducts sounds so that listeners at opposite corners can hear each others’ words when whispered into the wall. It’s amazing how the sounds come through loud and clear.

The Dining Concourse, a labyrinthine food court filled with railroad memorabilia and decor, abounds with specialty restaurants and tempting bakeries. People flock here for everything from curries and cupcakes to chili, deli sandwiches and spicy Jamaican beef patties. For a real New York experience, dine under the tiled-vaulted ceilings of the Oyster Bar, which offers fresh seafood, including 30 varieties of oysters at its raw bar. 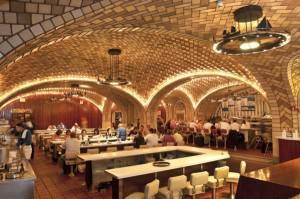 Back on the Main Concourse, one of the highlighted tours is Vanderbilt Hall, the former Main Waiting Room (a few of the original oak benches are still in place) and now a space for exhibitions and private events. A plaque recognizes the efforts of Jacqueline Kennedy Onassis, a driving force in saving Grand Central Terminal from being demolished in the 1970s (as New York’s Pennsylvania Station was in the 1960s).

Vanderbilt Hall is named for Commodore Cornelius Vanderbilt, the railroad and shipping tycoon who built and owned Grand Central. The decorative motif of oak leaves and acorns, found in various places, was the Vanderbilts’ family crest. At opposite ends of the Concourse are marble grand staircases modeled after those in the Paris Opera House. The west one, leading to the balcony-level Michael Jordan’s Steakhouse, is original; the other was built during the terminal’s four-year restoration, completed in 1998.

Another stop is the Biltmore Room. Also called the “Kissing Room,” it was where celebrities, politicians and soldiers greeted loved ones with hugs and kisses before going upstairs into the New York Central Railroad’s old Biltmore Hotel (now the Bank of America building). Vintage photos show movie stars who arrived on the 20th Century Limited, the most luxurious train of the day. In fact, the phrase “rolling out the red carpet” originated with the train’s ritual of rolling out a custom-made red carpet for boarding passengers. Other famous long-distance trains listed on the arrival chalkboard include the Yankee Clipper, Wolverine and Knickerbocker.

One of the last stops on the tour is the Transit Museum, where exhibits document New York railroad history, including photos of Penn Station and how this icon fell to the wrecking ball. The museum gift shop sells train- and subway-related merchandise, from T-shirts to games.

After the tour, relax in style over a drink at The Campbell Apartment, a clubby, wood-paneled cocktail lounge that once was the private office and salon of 1920s mogul John Campbell, a New York Central shareholder.

Rental of the audio player is $6 for adults, with discounts for children, students, seniors and persons with disabilities. For group reservations, call 917-566-0008; gct@orpheo.us. (grandcentralterminal.com)