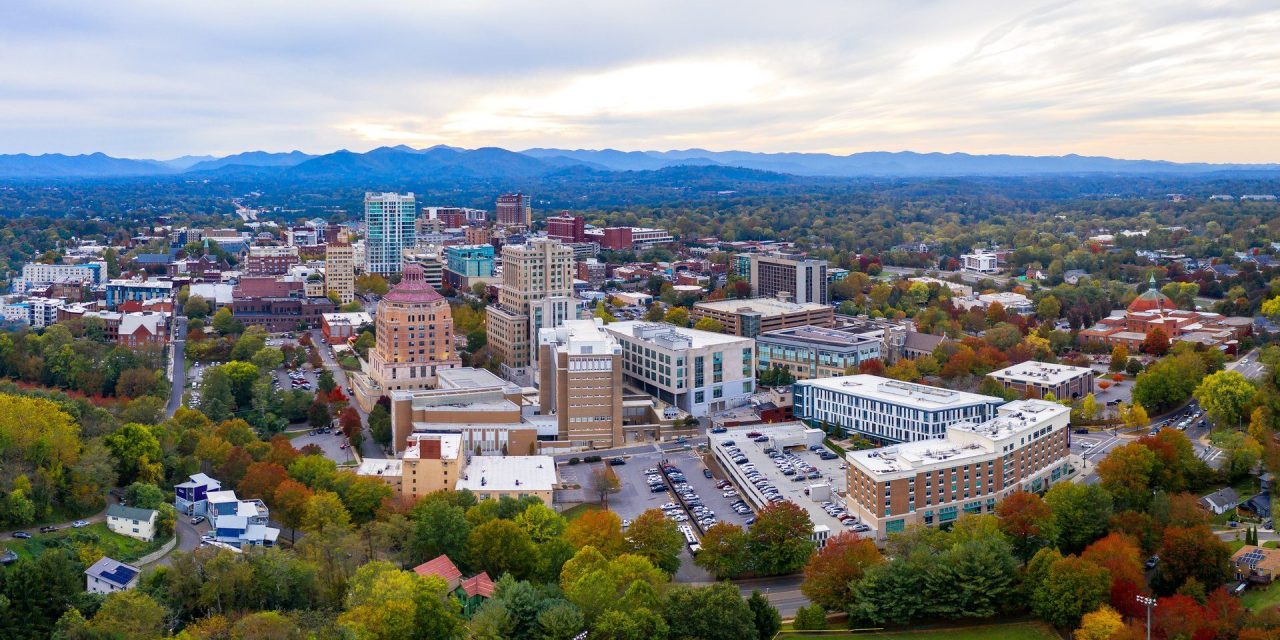 A national center for arts and crafts, this cultural hotspot is also a magnet for beer lovers, foodies and nostalgia buffs.

Cradled by the Blue Ridge Mountains of western North Carolina, the city of Asheville seems to be its own little world, a mellow setting where artists, musicians, chefs and other creative types thrive. Poking around the downtown area, I passed bookstores, coffeehouses, craft shops and art galleries while trying to get a feel for this oasis of culture and laid-back living.

Or should I say counter-culture? As someone who grew up in the 1960s, I kept having hippie-era flashbacks as psychedelic visions of San Francisco’s Haight-Ashbury District and Chicago’s Old Town came to mind. There were older men in ponytails, a few young girls in granny dresses and street performers singing, strumming, juggling and reciting poetry. Amid shops purveying hemp, beads, tie-dyed clothing and Himalayan imports, left-leaning graffiti popped up here and there. In shop windows, I noticed certain words more than once, words like “Earth,” “organic,” “artisan,” “CBD,” “handcrafted,” “sustainable” and “fair trade.” A funky vibe prevailed. 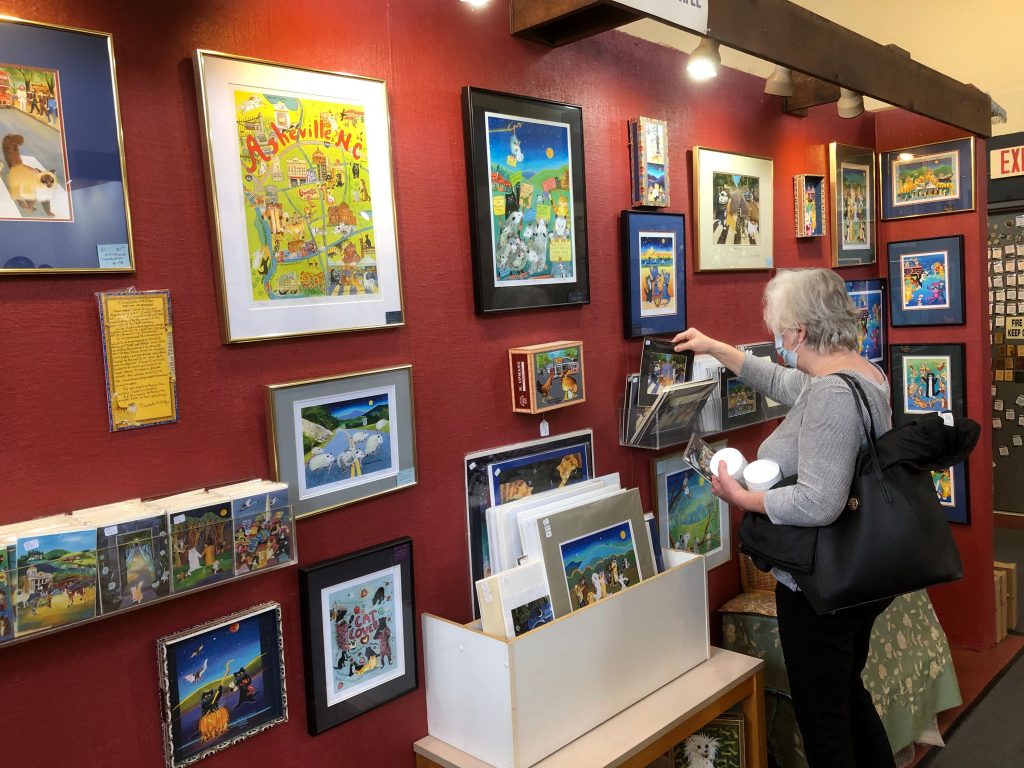 Kress Emporium is one of many art galleries in downtown Asheville, North Carolina. (Randy Mink Photo)

Besides giving me a chance to commune with the free-spirited bohemian days of my youth, downtown Asheville lent a familiar feel in another way, reminding me of my hometown with many examples of mid-20th century commercial architecture. Two former dime stores, for instance, have been transformed into art galleries. A walk through downtown reveals lots of historical plaques worth stopping to read.

From my base at the new Asheville Element Downtown, a sparkling, extended-stay property, I spent several days exploring hilly downtown Asheville, drifting from store to store and soaking in the history of this growing city ensconced at some 2,000 miles above sea level in the southern Appalachians. The metropolitan area counts more than 100,000 residents, a number that surprised me. I was thinking quaint mountain town, not a cosmopolitan urban center with tall buildings. A popular stop for travelers following the scenic Blue Ridge Parkway, it’s clearly the hub of commerce in western North Carolina.

One of my favorite places in downtown Asheville was the reimagined F.W. Woolworth 5 &10, a dime store that opened for business in 1938. Restored in 2001, the building now is known as Woolworth Walk and houses the largest gallery in Asheville featuring only local artists. Mini-galleries on the main floor and basement levels display the paintings, photography, fiber arts, sculptures, pottery and jewelry of some 170 artists. Especially eye-grabbing are the paintings that capture the beauty of the Blue Ridge Mountains, with their stunning portrayals of waterfalls, sunsets, fall colors and rhododendrons in bloom. Some works show scenes of historic downtown Asheville. 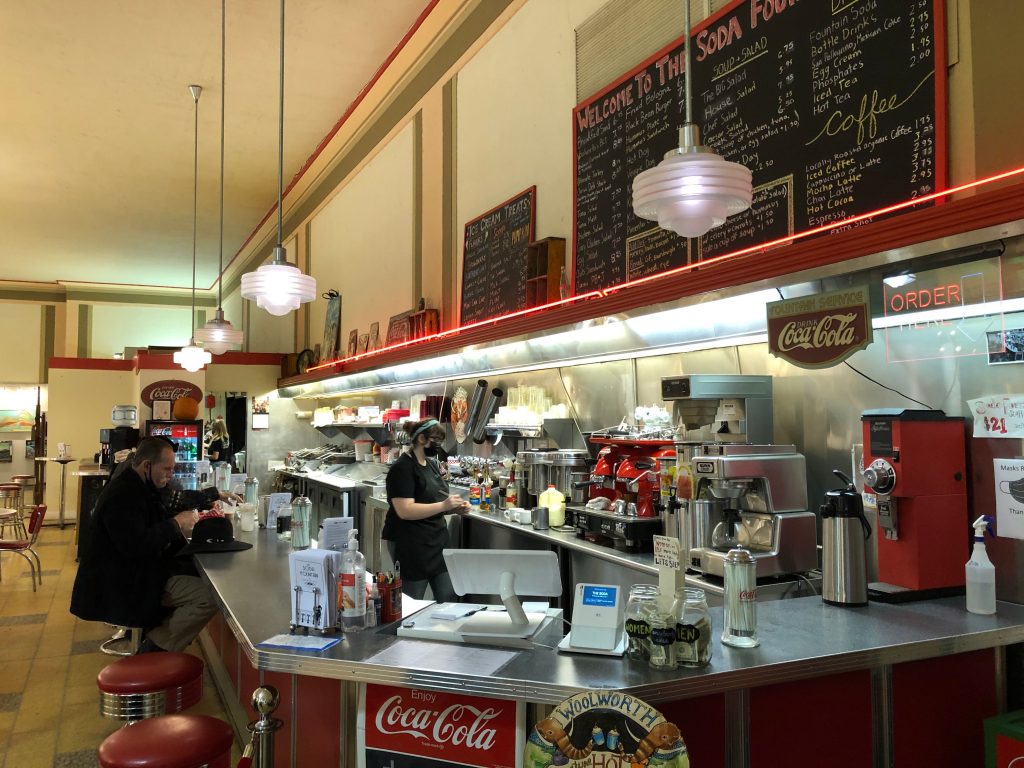 Visitors in downtown Asheville can view the works of local artists and have a casual lunch at Woolworth Walk, an art space housed in a former dime store. (Randy Mink Photo)

Just steps from the art, a replica 1950s-style soda fountain, fashioned after the original Woolworth’s luncheonette and in the same location, offers counter service and has tables as well. To whet my nostalgia, I ordered a grilled bologna sandwich and Nehi grape pop. The menu also listed grilled cheese, BLT, tuna melt, chicken salad. and peanut butter and jelly sandwiches, plus hot dogs, burgers, soups, salads, and, of course, malts and ice cream sundaes. On the wall by the cash register, a framed newspaper article chronicled the peaceful integration, led by black students in 1960, of three lunch counters at downtown Asheville variety stores. (At one point the U.S. had more than 3,000 Woolworth locations. The last store closed in 1997.)

In the former Kress variety store a block away, Kress Emporium showcases some 80 regional artists and craftspeople along with a selection of antiques and collectibles. Dating from 1928, the Kress building is an outstanding architectural landmark with its rich ceramic tile and neoclassical motifs.

S&W Market, a two-story food hall in an ornate 1929 building, is another downtown dining choice that echoes with nostalgia. The Art Deco showpiece originally held an S&W Cafeteria, part of a Charlotte-based chain. Today there are six food and drink vendors, including Buxton Chicken Palace, where I had a decadently delicious fried chicken sandwich on a buttered bun with white barbecue sauce, a slice of American cheese and, for a Southern twist, a thick layer of creamy pimento cheese spread. Other tenants at S&W Market are Peace Love Tacos, Bun Intended (steamed buns and other Asian specialties), Farm Dogs (grass-fed hot dogs and sausages), The Hop Ice Cream and the downtown taproom of Highland Brewing, Asheville’s original craft brewery.

The Grove Arcade, filled with inviting shops and restaurants, is yet another downtown landmark with a new life and a great story to tell. It opened in 1929 as one of America’s first indoor shopping malls, the dream of developer Edwin Wiley Grove, who envisioned it to be “the most elegant building in America.” Grove, who died two years before the five-story Art Deco gem (originally intended to support a 14-story office tower) was completed, had made millions developing remedies for malaria and the common cold. He also created the Grove Park Inn, a venerable Asheville resort hotel that exists today under the Omni banner.

For 13 years, the Grove Arcade was the center of civic life, but during World War II all the tenants had to move out when the U.S. military purchased it. After the war, the building was transformed into a federal weather records center and then sat abandoned for many years until a group of locals revitalized it and held a grand reopening in 2002. 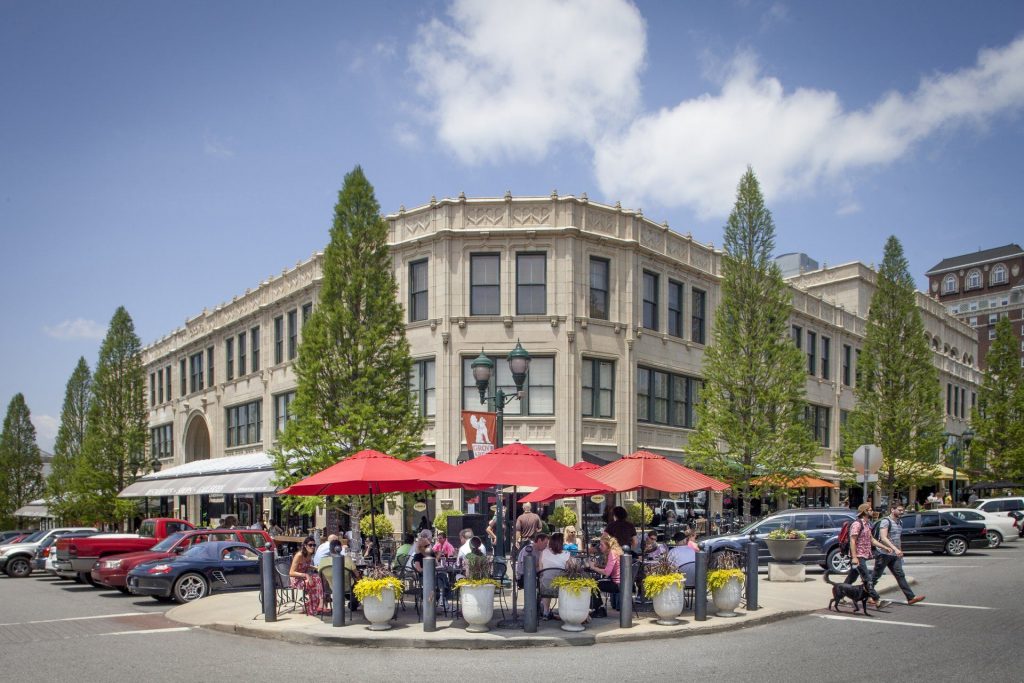 Visitors to the Grove Arcade will find shops, all on the first level, offering everything from fashions and jewelry to crafts, bath products and stringed instruments. Enter the Earth specializes in minerals and precious gems, displaying exquisite specimens of amethyst, rose quartz, malachite and garnets. The arcade’s Page Avenue side, known as Restaurant Row, offers indoor and outdoor dining at places such as Battery Park Champagne Bar, Baba Nahm (grab-and-go shwarma, falafel and other Middle Eastern fare), Bebettes: A New Orleans Coffeehouse (featuring fresh beignets) and Huli Sue’s BBQ & Grill (Texas-style BBQ with Hawaiian influences). The building’s upper floors are offices and residences.

With architectural treasures around every corner, it’s hard to image that in the early 1980s local government and business leaders had plans to tear down 11 blocks for a mall project. But a grassroots citizens group organized to oppose the demolition—and prevailed. That’s when downtown revitalization got its start and turned the district into what it is today. 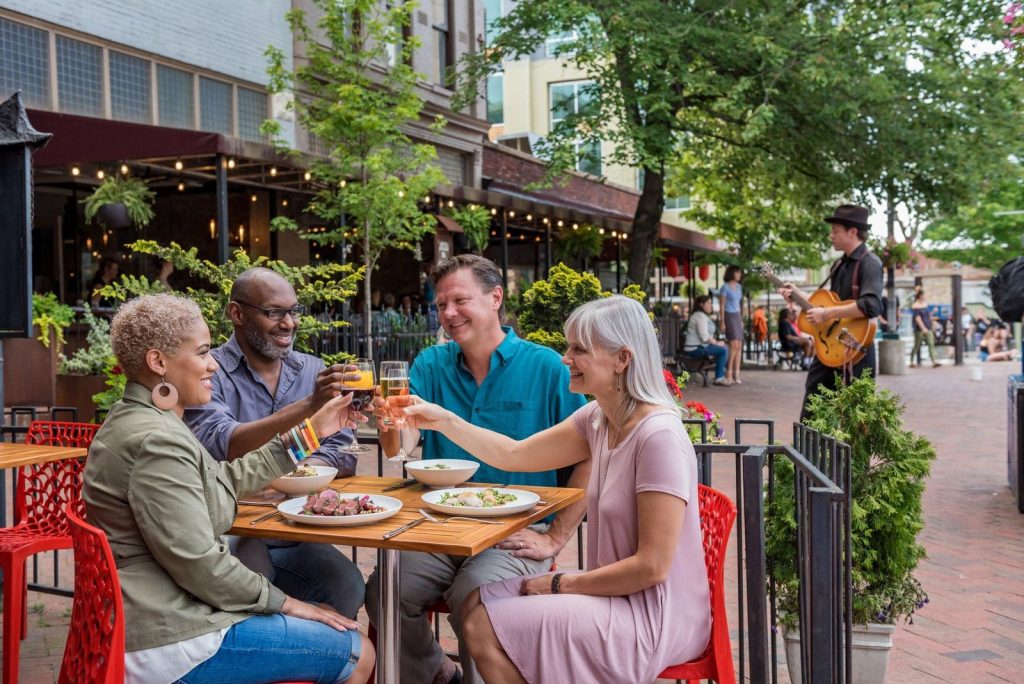 A big part of the Asheville experience is the food and beverage scene. The more than 250-plus independently owned restaurants include a few with James Beard-nominated chefs. At places big and small, you can expect farm-to-table fare sourced from the surrounding mountains, and numerous rooftop bars offer views of those lofty peaks. Artisan cheeses, scrumptious baked goods, and high-quality produce and meats are ubiquitous. Ethnic eateries feature specialties from faraway lands like India, Thailand and Ethiopia. Food trucks add to the culinary landscape. Eating Asheville food tours, with visits to six restaurants in 2½ hours, provide a fun way to sample some of the city’s best cuisine.

When it comes to beverages, greater Asheville is particularly known for craft beer. In fact, it’s been called Beer City and appears on many beer geeks’ bucket lists. Besides having more than 50 locally-owned breweries, the area is home to large breweries operated by national craft beer giants the Sierra Nevada and New Belgium, both of which offer eats and drinks. Highland Brewing, founded in 1994, pioneered the now booming beer industry and has a 40-acre East Asheville campus where guests enjoy walking trails, disc golf, volleyball, live music, food trucks and small-batch beers available only at the brewery. Visitors to Asheville find distilleries, wineries, cideries and meaderies as well. 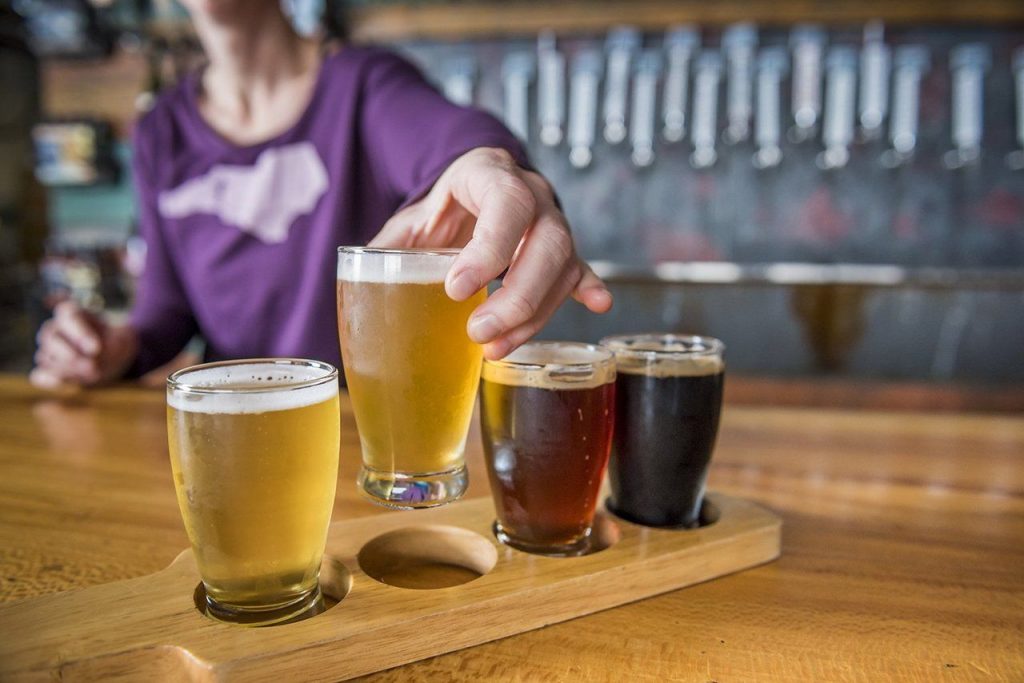 South Slope, an emerging neighborhood of bars, restaurants and art studios on the edge of downtown, is perhaps the best place to sample the city’s beer offerings, as it has nearly a dozen breweries within easy walking distance of each other. Many have outdoor patios and are serviced by food trucks. Loaded with character, the South Slope is a former industrial district that held warehouses, factories and automobile shops. A self-guided tour of the winding, two-mile South Slope Mural Trail reveals nearly 20 artistic gems that have been painted on the sides of old buildings. 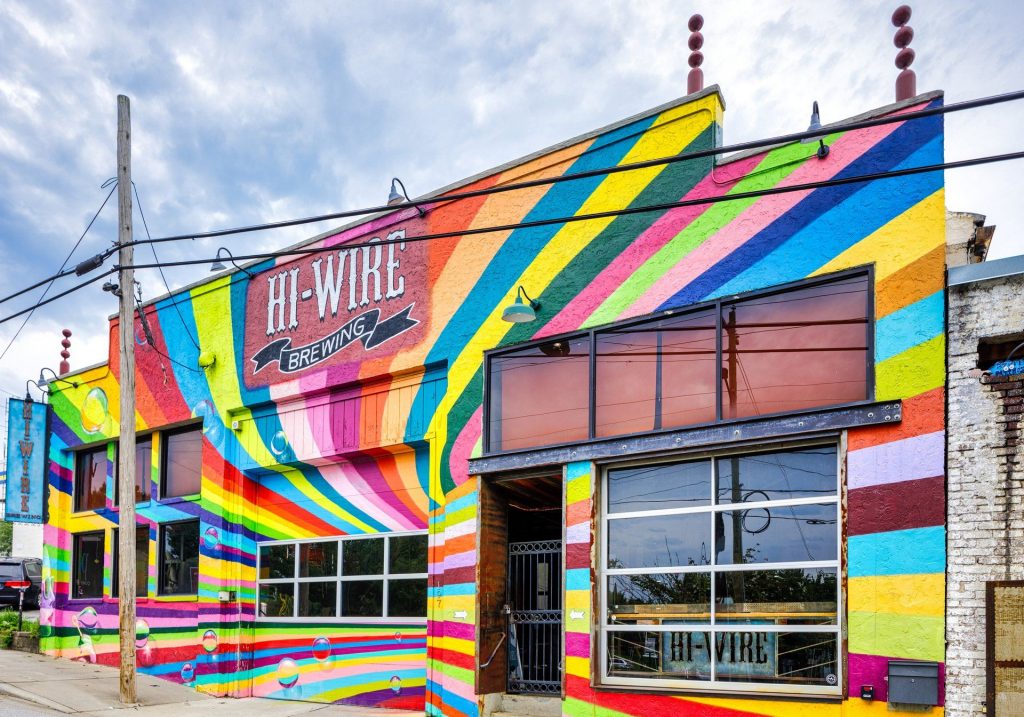 The South Slope neighborhood is known for its beer and its murals. (Photo credit: ExploreAsheville .com)

While the Downtown Asheville Arts District boasts nearly two dozen fine arts and contemporary crafts galleries, you will find more than 200 artists who have set up studios and galleries in the River Arts District (RAD), a one-time industrial area along more than a mile of waterfront on the French Broad River. Visitors enjoy walking from building to building, looking for art to purchase and watching makers ply their trades. Guided walking tours are available. The district also has restaurants and cafes, breweries, a winery and a cidery.

The art community started moving into RAD in the 1980s in search of affordable space when downtown rents became too expensive. Today, RAD is one of the largest arts districts in the U.S., occupying 23 high-ceilinged buildings with brick walls, exposed beams and ducts, and bare cement or creaking wooden floors. These large, open spaces were once the domain of varied businesses, including a textile warehouse, cotton mill, chicken hatchery, meatpacking plant, feed company, general store and tannery. Some buildings house as many as 50 artists. 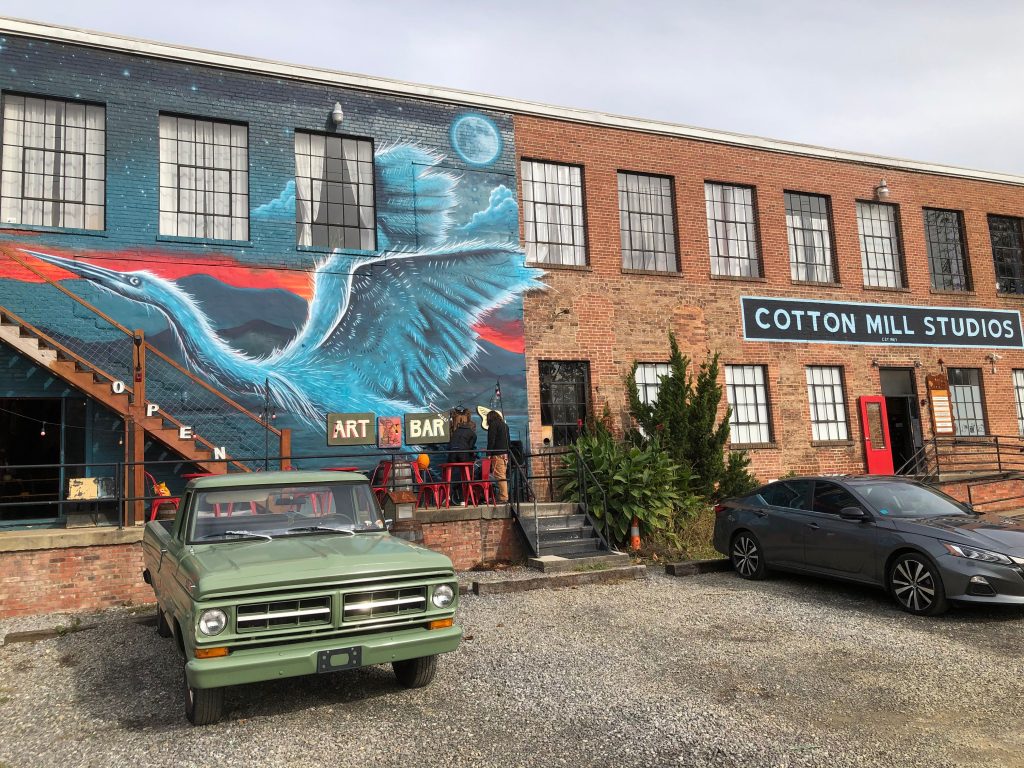 The River Arts District is on Gray Line’s Hop-on, Hop-off Trolley Tour of Asheville. The complete, 10-stop tour (one loop) lasts about 90 minutes, and there are stops at both the southern and northern sections of RAD. A ticket is good for two consecutive days. Trolleys are available for group charters.

Also good for orientation is the two-hour downtown walking tour conducted by Asheville by Foot. Your guide tells how Asheville became a boom town in the late 1800s thanks to the railroad’s arrival and the influx of tuberculosis patients who came for the mountain air and stayed in the sanitariums and boardinghouses that sprouted up. You also learn about the first skyscrapers and the influence of the Vanderbilts, one of the richest families in America at the time. The tour stops in front of the Thomas Wolfe Memorial State Historic Site, the childhood home of the famous novelist. 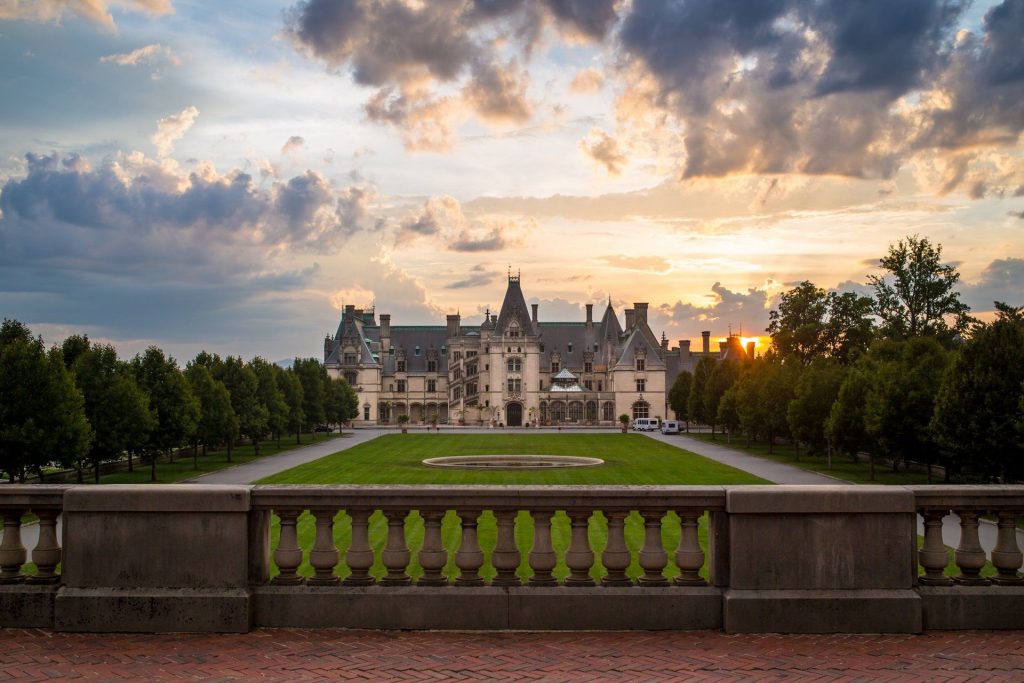 No trip to Asheville is complete without devoting the better part of a day to touring Biltmore Estate, the palatial 1895 country home of George Washington Vanderbilt and his wife, Edith. Billed as “America’s Largest Home®,” the 250-room French Renaissance chateau, still owned by the family’s descendants, is a treasure chest of exquisite European furnishings, richly carved wood, and priceless paintings and tapestries. Besides doing an audio tour of the home, visitors will want to explore the grounds and gardens designed by Frederick Law Olmsted, the father of American landscape architecture.