The 12th annual Arab World Fest was held in Milwaukee Aug. 6-8. Exploring the cultures of 22 Arab countries, the festival is one of several ethnic events presented every summer on the downtown lakefront. Group travel planners should consider including a festival in their summer itineraries.

Ihsan Atta, president of Arab World Fest, said attendance increases by about 10 to 30 percent every year. He said the festival’s mission is to promote the rich variety of the culture, adding that music and dance is a big part of the festival. “Music has a way of reaching people. It crosses borders and differences and beliefs.” 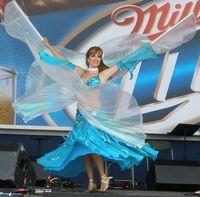 The main stage and the cultural stage were a whirlwind of activity with captivating performances. Julianna & the Blue Lotus Middle Eastern Dancers expressed the art of belly dance with eye-catching moves and vivid, colorful costumes. Fatiha sang the popular Nancy Ajram hit “Ah wa nos” (Yes and a half) among other hits. Chadi Hachem’s smooth voice carried well-known Arabic songs such as “Sayajna Lebnan” (We built a fence around Lebanon), originally done by one of the biggest all-time artists of the Arab world, Wadih El Safi. Toward the end of the performance Hachem and members of the band came down from the stage and performed standing on the bench of the first row.

Chady Hachem and band members in the first row (photo by: Nadia Beidas)

Gaida and Levantine Indulgence performed her original songs and classic Fairuz songs such as “Nehna wa amar al jeeran” (We and the moon are neighbors). She also sang the Syrian folk song “Al Maya” (To water), “Helwa ya baladi” (My beautiful country) and the artist Asala’s hit song “Ya Magnon” (Oh crazy one).

Debke, Middle Eastern line dancing, was done by the Al Ramtha Jordanian Folklore Troupe, complete with all the jumps and twirls common to the dance style, set to patriotic Jordanian music. Other performers included Elias Haddad, the Desert Ensemble and Sargon Youkhanna. 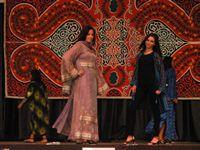 A fashion show featured the various styles and colors of women’s and men’s garments found in the Arab countries. A Saudi dance was performed.

Vendors sold items such as Arabic CDs, Middle Eastern clothing, jewelry and Arabic books. One was Habibtees, a combination of the Arabic word “habibi/habibti” (darling) and T-shirt, selling shirts like their logo Habibtees. One T-shirt had “Bebsi” written with the Pepsi logo. (Bebsi is the way Arabs who speak English as their second language would pronounce of the word Pepsi because there is no letter “p” in the Arabic language.) Izdihar’s Boutique sold henna, clothes and eyeliner. West Bank Couture had a variety of their signature “kuffiyehs” [a scarf draped around the neck] from their clothing line, and their T-shirt line is coming soon.

Several organizations handed out informational brochures. Arab and Muslim Women’s Research and Resource Institute works to write the histories and accomplishments of their communities. Project Nur is a college campus organization which sheds light on a different Islamic voice. Jewish Voice for Peace’s mission is peace for Palestinians and Israelis with an end of occupation in the West Bank, the Gaza Strip and East Jerusalem. 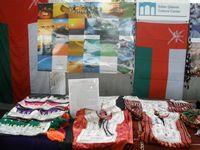 Displays featured the cultural aspects of different countries by showing items specific to Oman, Saudi Arabia, Morocco, Palestine and other countries. Arabic musical instruments such as the oud (Arabic guitar) and tabla (Arabic drum) were displayed near the stand featuring prominent Arab-Americans. Festival goers could take a break and hop on a camel ride.

Festival attendees had the option of stopping in a tent and watching films. One of these was Lemon Tree, a 2008 film that portrays the struggle of a Palestinian widow trying to stop her new neighbor, the Israeli defense minister, from destroying her family’s lemon grove. He had moved into a home on the green line border between Israel and the West Bank and wanted the grove removed for security reasons. Other films included the Iron Wall, Occupation 101, Frontiers of Dreams and Fears, and Slingshot Hip Hop.

The aromas of falafel, shawarma, manaeesh (pastries with spinach or the zattar spice) and other Arabic foods enticed festival goers. Other treats included Arabic sweets such as knafa and balawa.

With two stages, shopping and other activities, Arab World Fest captivates the dynamic spirit and culture of the Arab world here in the States.