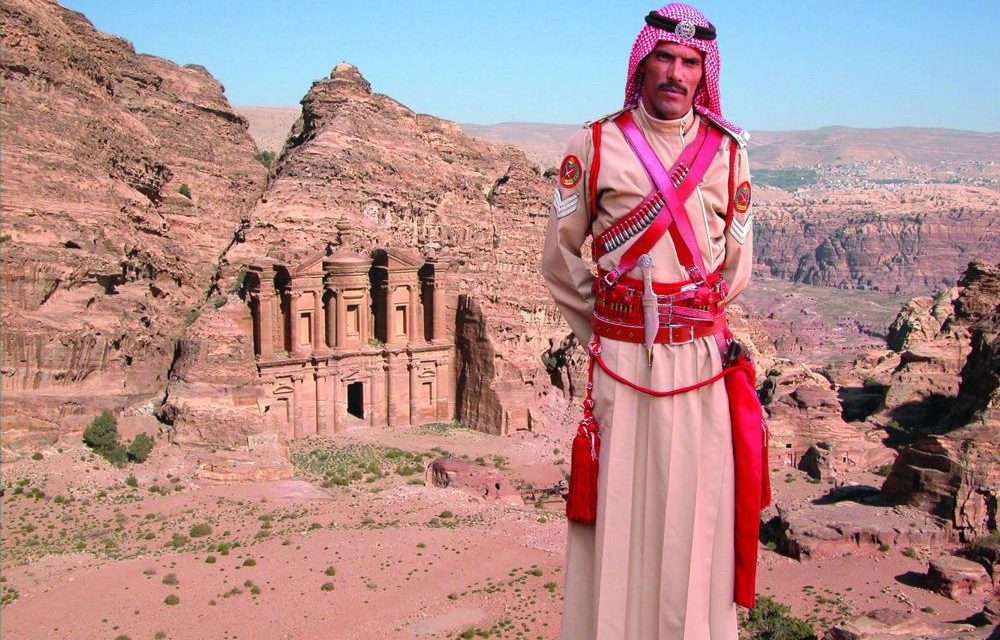 It may not be as famous as the Acropolis or ruins of Pompei, but Petra ranks among the great monuments of antiquity. Perhaps the most majestic and intriguing archaeological site in all the Middle East, the “lost city” carved from red sandstone outcroppings is the face of Jordan tourism—it’s the place you inevitably see on posters, brochures and guidebook covers. The rock facades of Petra have even starred in Hollywood movies.

Though Jordan’s top tourist draw, Petra is not exactly a household word, a fact that adds to the mystery surrounding this ancient outpost concealed in a mountain-cloaked basin, hidden for centuries from prying eyes. The site is about two hours north of the Red Sea port of Aqaba and three hours south of Amman, the capital.

Groups at Petra should expect a strenuous walking tour covering three to five miles. It’s about 15 minutes from the entrance gate to the Siq, a narrow, two-thirds-mile-long chasm that leads to the Treasury, the first and most magnificent of many secrets tucked within the rugged series of gorges. Upon your emergence from the shadowy, sheer-sided Siq, the sight of the sun-splashed Treasury is simply magical, a true moment of revelation.

A vision in dusky pink that changes shades as the day goes by, the temple-like facade spellbinds onlookers with stately, Greek-style pediments and Corinthian columns, colorful bands of rock, carved figures and a funerary urn. Although its original function is still a mystery, the Treasury is believed to be the mausoleum of King Aretas IV (9 B.C.-40 A.D.), who ruled this Nabataean city at the height of its power. Movie goers will recognize the iconic facade from the final sequence in Indiana Jones and the Last Crusade.

The Nabataeans, an industrious Arab people who established Petra, were known for their refined culture, impressive architecture and ingenious system of dams and water channels. It is not known exactly when Petra was built, but in the first centuries B.C. and A.D. the city prospered as the capital of the Nabataean civilization and a center of the silk and spice trades.

The Romans took Petra in 106 A.D., recasting the city with familiar Roman features like a colonnaded street and baths. But earthquakes in 363 and 551 caused much damage, and Petra soon became a backwater, a “lost city” known only to local Bedouins.

It wasn’t until 1812 that a young Swiss explorer, Johann Burckhardt, revealed Petra to the Western world after disguising himself as a Muslim holy man and tricking his Bedouin guide into taking him there. Soon European travelers, artists and archaeologists were making trips to Petra. To this day the oft-quoted words of Victorian poet Dean Burgon are used to describe Petra―“a rose-red city half as old as time.” 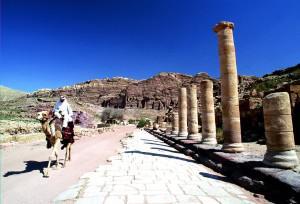 The Colonnaded Street at Petra dates from Roman days.

Petra gained new stature after being designated a UNESCO World Heritage Site in 1985 and got another big boost in 2007 by making it on the list of the New Seven Wonders of the World. (Other top vote-getters in the popularity poll commissioned by the New 7 Wonders Foundation in Switzerland: Chichen Itza in Mexico, Christ the Redeemer in Rio de Janeiro, Colosseum in Rome, Great Wall of China, Machu Picchu in Peru and Taj Mahal in India.)

After allowing plenty of time for picture-taking at the massive Treasury, the tour of Petra continues along a wider gorge flanked by more rock-hewn buildings, tombs, baths, rock drawings and reliefs. The Royal Tombs, the name given to four adjoining facades, are among the most dazzling sights. The Urn Tomb derives its name from the jar that crowns its pediment, while the grandiose Palace Monument, probably used for banqueting or funerary ceremonies, rises five stories and is the largest facade in Petra.

What’s remarkable is that visitors can climb up the stony paths and walk right into these manmade cave-tombs—they are not roped off and don’t even have guards. Look up and notice the fire-blackened ceilings, a sign that Bedouins lived in the caves. The last Bedouins were moved out in 1985 and resettled in a cement-block village built for them nearby.

Hardy tourists, mindful of ledges and dropoffs, clamber around the cliffs like mountain goats. Many trails are littered with shards of pottery, though some of the chips are from more recent times.

Highlights along the valley floor’s main trail include a 3,000-seat amphitheater built by the Nabataeans and renovated by the Romans; the Colonnaded Street, flanked by towering columns; and several temples, including Qsar-al-Bint, the only freestanding building that has survived. One trail leads to the remains of a Byzantine church dating from around 530 A.D. Its well-preserved floor mosaics, protected from the elements by an awning, were discovered only in the 1990s.

Besides ancient ruins, visitors take just as many pictures of the camels, donkeys, horses and souvenir vendors that flavor the Petra experience. Against the backdrop of the reddish cliffs, photographers might capture a Bedouin leading camels or a horseback rider wearing a red-checkered Arab headdress (kefiya) and talking on his cell phone. Boys as young as eight years old walk around hawking postcards, while souvenir stalls along the way offer jewelry, pottery, daggers, guidebooks, replica coins and various trinkets. (Sand bottles, containing intricate desert scenes made from different colors of sand, are favorite keepsakes of Jordan.)

Bedouin camel and donkey handlers and stallholders certainly lend some local color and pathos to the archaeological park, but the commercialism and animal traffic takes its toll on the fragile site. A new development authority was established in 2009 to manage and preserve Petra and attract more investment. Its master plan calls not only for improved animal-hire practices, but for more directional and interpretive signs, information booths and eco-toilets, all of which will added this year. The visitor center was just upgraded, and by November four new trails will enable visitors to explore more areas; only three percent of the park is now accessible.

Nasser Sultan Shraideh, chief commissioner of the Petra Development & Tourism Region Authority, said camel and donkey rides “are important sources of income for the local community, but new guidelines for the treatment, appearance and pricing of animals” are necessary to bring order. “Human interaction is an important element,” he said, “but we need to take a balanced approach.” 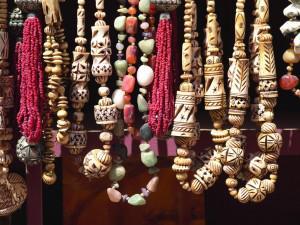 Bedouin jewelry and other souvenirs tempt tourists at the many vendor stalls at Petra.

A cluster of souvenir shops and refreshment stands lies outside the gate of Petra. The Indiana Jones Snack Shop and other businesses have taken on the name of the movie, their signs depicting Harrison Ford. Steps away, the town of Wadi Musa (“Valley of Moses”) caters to the tourist trade with gift stores, camera shops, Internet cafes, restaurants and hotels. A new touristic village revolving around indigenous music, dance, crafts and foods will open this year.

A few hours at Petra only touches the surface of what the mysterious city reveals, but you’ll leave the site knowing that you’ve witnessed one of the world’s ancient wonders. Without doubt the “rose-red city” is Jordan’s most valuable treasure. For many tourists, in fact, Petra is Jordan.