Outbreaks of Norovirus occur throughout the world, but we generally hear about these happening on cruise ships. Outbreaks occur on land as well, from restaurants and catered events to health facilities and hotels.

What exactly is Norovirus? It’s a common virus that usually causes mild inflammation of the intestines and stomach. Symptoms include vomiting and diarrhea that lasts a few days; usually there are no long-term effects.

How do cruise lines handle outbreaks and how is it treated? As cruise guests, what should you and your group members look out for and be concerned about?

A Few Facts About Norovirus on Cruise Ships 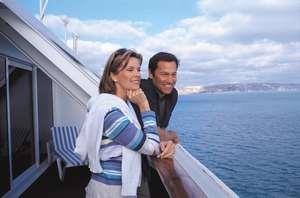 According to the Centers for Disease Control and Prevention (also known as the CDC), the reason that many times Noroviruses are associated with cruise ships is because health officials track all illnesses that occur on cruise ships. As a result of the CDC’s intense tracking, outbreaks are found and more quickly reported on a cruise ship rather than in a land-related outbreak (hotel, restaurant, etc.). With cruise guests embarking and disembarking ships, there is a chance new passenger arrivals may bring the virus onboard, and the close living quarters can also increase the contact. The infection itself is not usually serious, but it is highly contagious.
How Norovirus is Spread

The most common way Norovirus can spread is through touching objects or surfaces that have been infected with the viruses and then touching one’s own mouth, eyes or nose. Another way is having person to person contact with a Norovirus-infected person. For instance, sharing food or eating from the same utensils is one way the virus can be transmitted. Not washing hands after using the washroom and then eating or preparing foods is another.

My Experience with Norovirus

While on the second sailing of a “back-to-back” cruise in late fall 2011, I came down with the Norovirus. After doing a shore excursion, I came back to the ship, grabbed a quick lunch onboard with a friend and then started to feel queasy by late afternoon. Early that evening I had all the symptoms of Norovirus, full force. The next morning the cruise line made an announcement to report all illnesses to the passenger services desk as well as to the doctor’s office. Evidently, there was an outbreak of Norovirus.

I did get in touch with passenger services and the doctor’s office, and had to wait several hours for a nurse to come to my stateroom, where she did a check of my symptoms and vital signs. I was then given some over-the-counter medications that were added to the medical staff visit fee that was automatically put on to my shipboard account. I was told I would be quarantined to my stateroom. The quarantine would be in effect until it had been 48 hours after my last incident of vomiting and diarrhea. In other words, I had to have no incidents within the past 48 hours before I would be cleared and allowed to leave my stateroom.

I had to order from the room service menu, but only from their “healthy” items, which consisted of oatmeal, broth, Jello and supposedly salt-free crackers, which turned out to be name-brand crackers. There were also three poached items – poached salmon and two varieties of poached chicken. A separate staff was sent to clean my stateroom twice a day, and a block was put on my room key. Fortunately, the virus was gone 3½ days later.

Norovirus, however, continued to occur throughout the rest of the cruise because we continued to receive daily health advisories from the ship’s doctor for the need to report all incidents.

As far as any compensation? After returning home and writing extensive letters to the cruise line’s customer relations department, I was politely told I would not receive any compensation. Also, after a few emails back and forth, the last correspondence I received from this cruise line’s customer relations specialist quoted text from the passenger contract, saying, “Carrier may, without liability for refund or damages, confine You to Your stateroom, change Your accommodations, refuse to embark You, or disembark you at any time if, in the opinion of the Carrier, the Captain or the Doctor, Your presence might be detrimental to Your health, comfort, or safety or that of other Passengers or the crew.”
So once again, it’s important to know what is covered in the fine print of that cruise line passenger contract. In my case, the ship did not have to cut the cruise short, turn around and head back early.

A Good Reason to Take Insurance

I’ve always been an advocate of taking travel insurance and think it’s critical to include with your group members’ packages. Over the past years I’ve been able to use it – first back in 2008 when my luggage got accidently rerouted and on my cruise last fall. I submitted the bill for the nurse’s visit to my travel insurance company with documentation and received a check reimbursing me.

While doing a bit more research after my firsthand experience with Norovirus, I did run across a vaccine that researchers are currently working on. An article published in December 2011 said a new vaccine for Norovirus is being developed as part of a study, and it sounds promising.

It’s best to wash hands often and be careful about touching surfaces. Take along some extra precautions, including alcohol-based hand sanitizers and your own personal medications. Also invest in some type of travel insurance, so if you do wind up with some unexpected onboard medical expenses, you can get reimbursed. The next time I cruise, I will take along some extra precautions myself.