River lore, scenic views and rich slices of American history make Alton one of the most attractive group travel destinations in Southern Illinois.

It is the birthplace of the World’s Tallest Man, and that’s what intrigued me most on a recent visit to this Mississippi River city just 30 minutes from St. Louis. 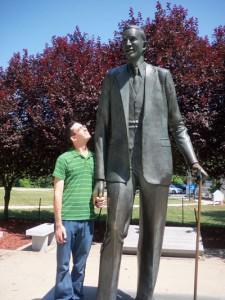 The statue of Robert Wadlow, the World’s Tallest Man, is an Alton landmark. (Randy Mink Photo)

A room at the Alton Museum of History & Art pays tribute to Robert Wadlow, Alton’s “Gentle Giant.” Born in 1918 at an average weight of eight pounds and six ounces, Wadlow suffered from a pituitary gland problem that led to his incredible height—8 feet, 11.1 inches. He died at the age of 22 and still is considered by the Guinness Book of World Records to be the World’s Tallest Man.

Well-liked in Alton, the 439-pound man had to bend down to go through doorways, climb stairs sideways and duck to escape ceiling fans. His abnormality landed him in the Ringling Bros. and Barnum and Bailey Circus, and with a shoe size of 37 he toured (with his father) as a representative for International Shoe Company, making personal appearances at shoe stores throughout the country. He died in his sleep from an infection caused by chafing from a brace on his left ankle. More than 40,000 people came to the funeral home day and night for two days straight.

The Alton Museum of  History & Art shows a 25-minute movie on Wadlow’s life and displays artifacts like his shoes and cap and gown. In a park across the street, an Alton must-do is posing with the life-size statue of Wadlow holding a cane.

More photo ops with statues are available downtown at the Lincoln-Douglas debate site. The monument to Stephen Douglas and Abraham Lincoln shows the candidates in heated debate. It was the seventh and final of the famous debates held during the 1858 campaign for U.S. senator. Lincoln went on to lose to Douglas, but his eloquent arguments against slavery brought him national attention. The Alton debate was the only one attended by Lincoln’s wife and child.

The tallest monument in Illinois, at 110 feet, can be found at Alton Cemetery. Comprised of a huge granite column topped with a bronze statue of Victory, it honors abolitionist Elijah Lovejoy, a newspaper publisher who was killed for his anti-slavery writings. On three occasions, angry mobs destroyed Lovejoy’s printing presses and threw them into the Mississippi River.

For groups, the Alton Regional CVB can arrange step-on guides for history tours that focus on Lincoln, the Civil War and infamous Alton Prison, where Confederate soldiers and court-martialed Union soldiers died in deplorable conditions (only ruins remain). Groups can marvel at some grand Victorian homes in the city’s three historic districts. 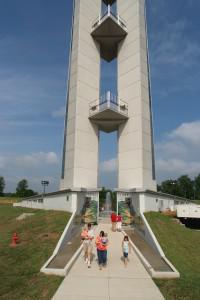 More history and photo opportunities await at the Lewis & Clark Confluence Tower in nearby Hartford. Built last year in commemoration of the historic expedition that started in this part of Illinois in 1804, the 180-foot tower has three viewing platforms at 50, 100 and 150 feet connecting two towers that represent Captains Meriwether Lewis and William Clark and the Mississippi and Missouri rivers. Each level tells stories about the area’s history, including Lewis & Clark, Meeting of the Great Rivers National Scenic Byway and the confluence of two great rivers—the Mississippi and Missouri. On a clear day, visitors can see the Gateway Arch in downtown St. Louis. A byway visitor center in the north tower has exhibits and videos.

The tower is just a mile from the Lewis & Clark State Historic Site, which is National Trail Site #1 on the Lewis & Clark Trail. At the Lewis & Clark Interpretive Center, groups will find exhibits, a theater and a replica of Camp River Dubois, where the men of the Corps of Discovery trained for the journey into Louisiana Territory. Living history interpreters demonstrate camp life during spring and fall.

Free tours are available at the Melvin Price Locks & Dam, a US Army Corps of Engineers facility where you might see barges going through the locks. Also free is the dam’s National Great Rivers Museum, with some 20 interactive and computer-animated exhibits about the Mississippi River.

Birds and other wildlife are the focus at The Audubon Center at the Riverlands, which opens in late August on Army Corps of Engineers grounds.

For more riverscapes, drive along Meeting of the Rivers Scenic Byways to Pere Marquette State Park, where scenic overlooks offer expansive views of the Illinois River Valley.Illinois’ largest state park—and the whole area—is especially popular during fall foliage season, when fiery leaves dapple the limestone bluffs. The park’s Pere Marquette Lodge, a limestone-and-timber masterpiece built by the Civilian Conservation Corps in the 1930s and expanded in 1988, affords river views from its terrace and has a main lounge with timber rafters and fireplace. There are 50 lodge rooms and 22 cabin accommodations. Fried chicken dinners, served family-style, bring crowds to its beamed-ceiling restaurant.

Elsah, “the village where time stood still,” is the most distinctive town on the byway. Perched on bluffs overlooking the Mississippi and graced with stone cottages and tidy gardens, it dates back to 1853. Elsah is home to Principia College, the only Christian Science college in the nation. Enjoy a guided tour of the beautiful campus, a National Historic Landmark, and town itself, listed on the National Register of Historic Places.

Also make a stop in the little river town of Grafton, perhaps for lunch at Grafton Winery & Brewhaus. Its terraces provide panoramic views of the Mississippi. Try the apple crisp wine. Then allow time to browse the quaint shops along Main Street. The Loading Dock, a restaurant right on the river, is also popular with groups. 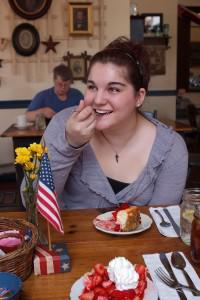 Cane Bottom/My Just Desserts can arrange a private “Lincoln’s Table” dinner for groups, featuring such period foods as beef brisket, Delmonico potatoes, ambrosia, relishes and pecan pie. Place cards bear the names of people like Stephen Douglas and other Illinois historical figures. As a laywer, Lincoln frequented the Ryder Building, used for courthouse trials, more than once and in 1840 delivered a speech there in support of Whig presidential candidate William Henry Harrison.

Restaurant owner Ann Shawler Badasch was once an antiques dealer who caned chairs—thus the name Cane Bottom. Antiques decorate the restaurant; stitchery and quilts are for sale. You can also buy her book Recipes and Reminiscences, in which she shares pie and other recipes.

After lunch, give the group some time to shop for antiques, crafts and collectibles along Broadway, known as Antique Row.

At the Holiday Inn Alton, Die Laughing Dinner Theater arranges interactive shows around a four-course meal. Each audience member is handed a part and invited to join in. Shows have included “Lucy Loves Ricky” and “All in the Mafia Family.” Murder Mystery Mayhem performances at Pere Marquette Lodge get groups involved in an interactive comedy murder mystery enjoyed around a three-course lunch or dinner.

For a group culinary experience at the Holiday Inn, check out the entertaining programs offered by chef Kenny Jaskiewicz. “Cooking with Chef Kenny” is a chance to learn some new tricks in the kitchen and sample food. Shows include “Flights of Fresh Pasta, “Summer Grillin’,” “Italian Festival” and “German Delight.”