Adventure Calls Travelers to the Southernmost City in the World

Ushuaia, Argentina thrives as a busy port at the tip of South America.

It didn’t exactly give me the sensation of dangling off the end of the earth, but just being in Ushuaia did make me feel I had been plopped into one of the far corners of the globe—a distant outpost far, far from home. From the gift shops and museums to the famous “Fin del Mundo” (End of the World) photo-op sign at the waterfront, you’re frequently reminded that the Argentine city of 60,000 is living on the edge—of the map.

Situated on the Beagle Channel, on a wide bay backed by jagged, snow-capped peaks, this port at the bottom of South America is perhaps best known as the jumping-off point for cruises to Antarctica, only 600 miles away. I saw a number of Antarctica-bound ships when I arrived aboard Australis’ Stella Australis after a four-night cruise through the fjords and islands of Patagonia, a wild, largely uninhabited land that beckons explorers to southern Chile and Argentina. It’s here that the 4,000-mile Andes chain finally peters out.

Captivated by Ushuaia’s end-of-the-road novelty and being innately curious about geographical extremes, I made a point of spending two days in town—my first time in Argentina—before the three-flight, 25-hour journey back to Chicago. Fellow Stella Australis passengers who had chosen the seven-night roundtrip voyage got a whole day to explore Ushuaia before the three-night cruise back to Punta Arenas, Chile, our port of embarkation. 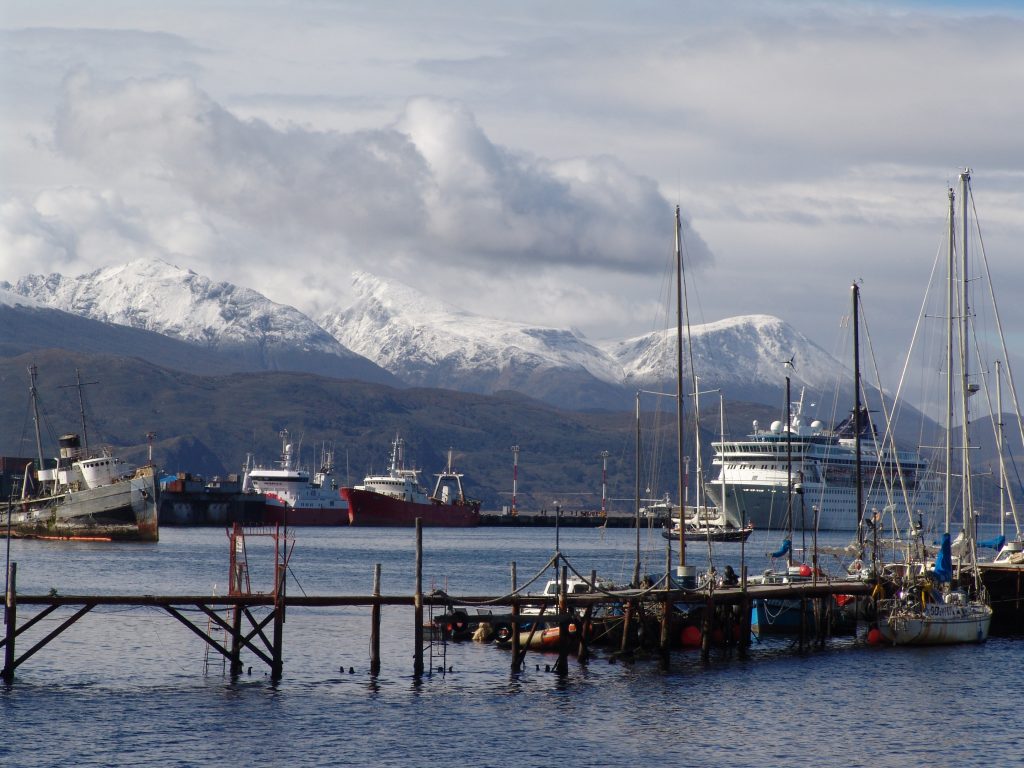 From out in the bay, Ushuaia appears to be an idyllic mountain town, its setting as majestic as can be. On closer look, though, you soon discover the rough edges of a fast-growing frontier town, a sprawling hodge-podge of building styles and colors with a haphazard, under-construction look. Tangles of overhead wires creep into the pictures you’re trying to frame; graffiti and litter mar other shots. I did like the corrugated iron buildings in shades of red, blue, bright green and lavender, some with gingerbread trim.

Like San Francisco, Ushuaia is a city of hills, with houses spilling chaotically down the slopes and staircases connecting some of the streets. Walking around, in the words of one guidebook, “requires calves of steel.” Be careful on the crumbling sidewalks.

Just the look of downtown Ushuaia, because of the snowy mountain backdrop and some wood-accented facades reminiscent of Alpine architecture, reminded me of a ski town. Shops selling ski and other outdoor gear on Avenida San Martin, the main retail street, and all the young backpackers in town reflect its hub-for-adventure status. (Argentina’s Tierra del Fuego National Park, the world’s southernmost national park, lies just seven miles west of Ushuaia, and Cerro Castor, the southernmost ski resort, is 16 miles away.) Travel agencies advertising “Antarctica Last Minute” add to the sense of wanderlust as you stroll down San Martin, just two blocks up from the port.

Ushuaia (pronounced “ooh-SWY-ah”) rests on the south coast of Isla Grande, the largest island in Tierra del Fuego, the remote, windswept archipelago at the foot of South America. Shared by Chile and Argentina, Isla Grande also is the largest island on the entire continent. Separating Isla Grande from the Patagonian mainland is the Strait of Magellan, the Atlantic-to-Pacific passageway discovered in 1520 by Portuguese explorer Ferdinand Magellan. Our Stella Australis cruise from Punta Arenas traveled the strait and went as far as the rugged cliffs of Cape Horn, the southernmost point of land before Antarctica.

On the Ushuaia waterfront, adjacent to the cruise ship terminal, you’ll find tour companies offering catamaran excursions out into the Beagle Channel. A popular option for tourists in town for a day or two, these boat trips spotlight marine life on and around the nearby islands. You’ll likely see albatrosses, cormorants, terns and other sea birds, and perhaps dolphins and minke whales. The real favorites are Alice Island’s sea lions and the Magellanic penguin colony on Martillo Island. 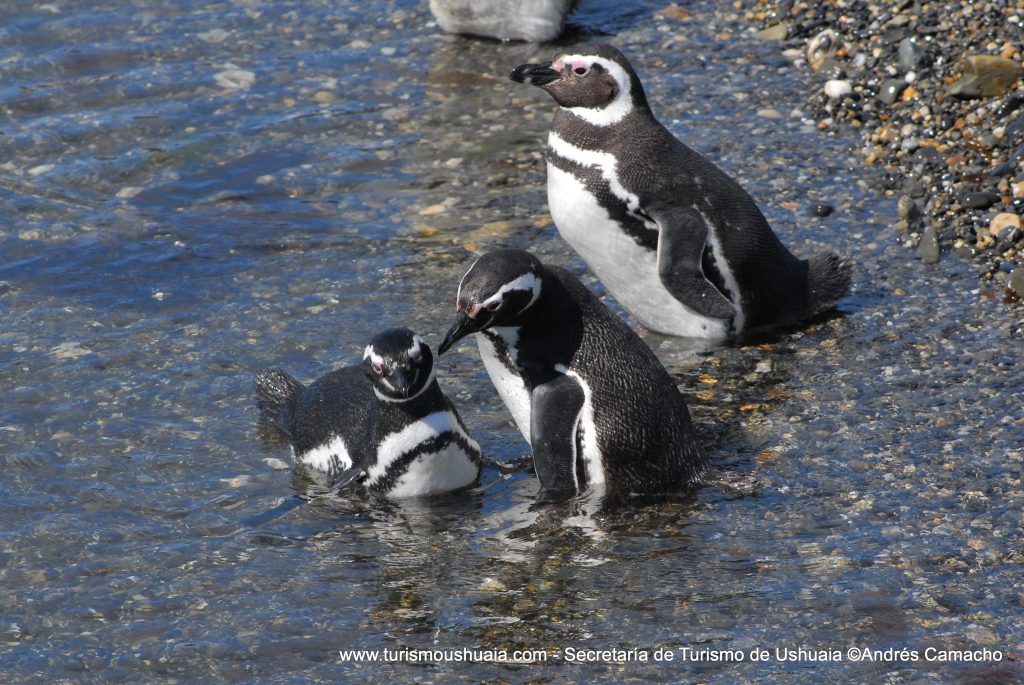 Catamaran boat tours from Ushuaia visit islands teeming with penguins and other wildlife.

At Ushuaia’s friendly municipal tourist office, across from the street, staffers will gladly rubber-stamp your passport with a circular black imprint that says, in English, “Ushuaia, Argentina, the Southernmost City in the World.”

Though Ushuaia proudly touts its southernmost status, there’s actually a town across the Beagle Channel that claims the title, and with some justification. Puerto Williams, the capital of Chile’s Antarctic province, is farther south than Ushuaia, promoting itself as the “southernmost town in the world.” With a population of only 2,874, it’s not large enough to be classified as a city—in the eyes of Ushuaia boosters anyway.

Besides getting your passport stamped, another must is posing on the waterfront next to the painted wooden sign inscribed “Ushuaia: Fin del Mundo.” You might even get some docked cruise ships in the background. (The cruise season is basically November-March, the warmest time in this part of the world, when temperatures in Ushuaia can reach into the 50s and 60s.)

Ushuaia’s premier attraction, the Maritime and Prison Museum of Ushuaia, occupies a former prison built in 1902 and provides an excellent introduction to regional history. Seafaring exhibits cover early explorers and later research expeditions, including naturalist Charles Darwin’s 1832 voyage on the Beagle. Ushuaia today is home to a large naval base, adjacent to the museum.

Museum visitors learn that Ushuaia was officially established in 1884 as a penal colony, having been settled 15 years earlier by British missionaries who came to evangelize among the indigenous peoples. In one wing, each cell is set up to tell the story of an infamous jailbird or aspect of prison life. Cells on the gallery above focus on pioneering expeditions to Antarctica and famous prisons that are now museums, such as Alcatraz and the Tower of London. For an eerie experience, don’t miss the prison’s unrestored wing—an unheated, unpainted section left as it was, its peeling walls reflecting the grim realities of doing time. 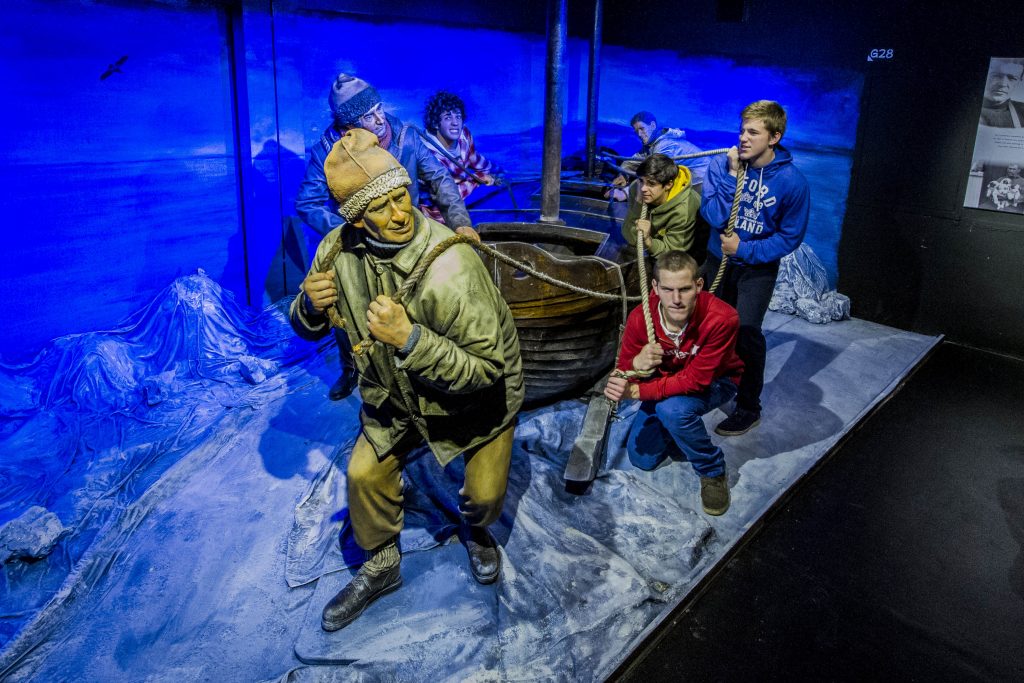 For history with an entertaining twist, check out Historia Fueguina Thematic Gallery, an attraction where “more than 120 characters are waiting to take a picture with you.” As you tour with an audio headset, you can saw logs with a prisoner and photograph scenes of Darwin encountering penguins or Antarctica explorer Ernest Shackleton with sled dogs. Located on Avenida San Martin, Historia Fueguina has one of the street’s better souvenir stores. Like other gift shops, it offers striped prison shirts and penguin knickknacks. Or how about a bottle of Cape Horn beer, brewed in Ushuaia and marketed as the “world’s southernmost beer.”

Walking around the Ushuaia waterfront, I encountered two reminders of Argentina’s 20th century history. Anyone familiar with the era of dictator Juan Peron— or at least knows the Andrew Lloyd Webber musical “Evita”— will appreciate the little park on Maipu dedicated to Eva Peron, who became a champion of the poor. Enjoying near-saint status in Argentina, she is honored with a bust and plaques extolling her legacy. Plaza de Malvinas Islas is a memorial park dedicated to Argentine soldiers who fought in the 1982 Falkland Islands War with Britain, which has had sovereignty over the Atlantic islands (called Malvinas by Argentina) since 1833.

If you have time to venture outside of town, consider a ride on the touristic End of the World Train. The railroad—the world’s most southerly, of course—goes into Tierra del Fuego National Park, following the route of the steam-driven train that prisoners used to haul timber.

I stayed at Los Cauquenes Resort & Spa, a high-end place located a few miles from the city center. Overlooking the Beagle Channel, the 54-room, wood lodge certainly sets the standard at this end of the world, attracting many American cruise travelers.

Ushuaia may be the end of the road, but for me it represented what I hope will be a new chapter in my travels. This distant outpost certainly whetted my appetite for a voyage to Antarctica and the Falklands—and trips to other parts of Argentina and South America. I just have to be positive and set my radar south—way south.

For more information, contact the Ushuaia Office of Tourism, www.turismoushuaia.com.